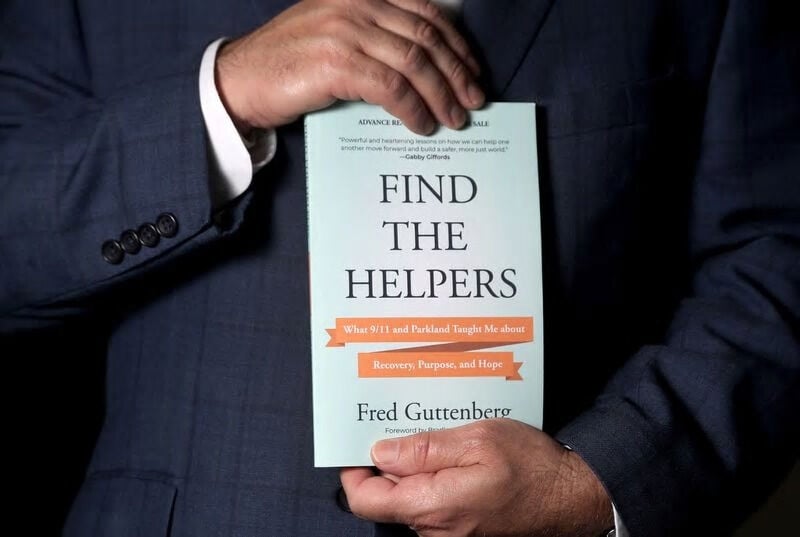 Fred Guttenberg, whose 14-year-old daughter, Jamie, was murdered in the Parkland school shooting, holds a copy of his book "Find the Helpers." 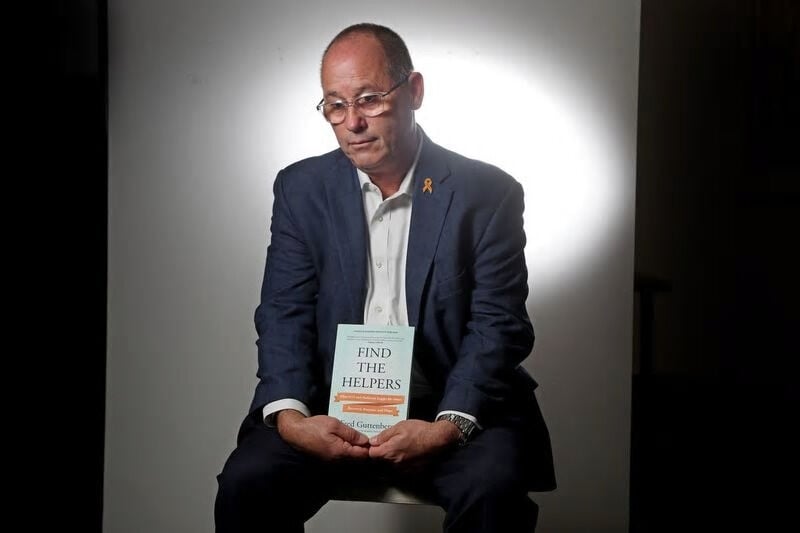 Fred Guttenberg describes in his book those who helped him through the loss of his daughter, and his brother, who died from 9/11-related cancer just months before his daughter was killed.

FORT LAUDERDALE, Fla. — Countless acts of generosity and support helped Fred Guttenberg survive the unbearable loss of his only daughter in Parkland's high school massacre in 2018.

A who's who of political heavyweights contacted him: the Democratic presidential candidate, the speaker of the House, a congressman from Florida, the governors of Ohio and New Jersey. But the kindness of friends and strangers also propelled him through his darkest days, including a famous Hollywood actor who pledged his support, and a group of Broward fire cadets who went to the funeral.

These helpers are part of Guttenberg's uplifting story, which he's sharing in his new autobiographical book, "Find the Helpers: What 9/11 and Parkland Taught Me About Recovery, Purpose, and Hope."

"I have come to find greatness in people who do unexpectedly generous things in the moment — people who never intended to become heroes," he writes.

Jaime Guttenberg, age 14, was one of the 17 people killed at Marjory Stoneman Douglas High on Valentine's Day. Jaime, a dancer who loved to binge watch the reruns of "Friends" television shows, had been shot in the back as she ran down the hallway of her school, trying to escape the bullets on the third floor.

Guttenberg became a force after her murder, and it began the day of her funeral.

In his anger, he vowed that day in February 2018 to a standing-room-only crowd of about 1,500 people that he had been "triggered" and would be "relentless" and would not let her death be in vain.

And that began his journey from relative obscurity to national name recognition. Now, he has about 321,000 Twitter followers and a personal friendship with the former vice president of the United States, now a presidential contender.

In 2018, "Parkland" became no longer just the name of a city best known for McMansions and coveted schools, but synonymous with the mass shooting, as in "when Parkland happened."

Since student activists helped turn it into a stomping ground for gun control, Guttenberg has counted many victories:

He was key in speaking out about Bank of America, which ultimately sold its interest in gun manufacturer Remington Outdoor Co. and sent several key executives to Parkland to assure Parkland parents it would keep its pledge not to financially back makers of military-style assault weapons sold for civilian use.

With family ties to Ohio, Guttenberg lobbied there for gun safety and was invited to testify before the Legislature by former Ohio Gov. John Kasich, the former Republican presidential candidate. It didn't pass, but Guttenberg said it encouraged him that gun violence could be a non-partisan issue. He has been outspoken against President Donald Trump, and has advocated election of Democrats who will make gun safety a priority.

Dick's Sporting Goods CEO Ed Stack met with the Parkland families and committed to making further changes in his industry regarding guns.

Speaker of the House Nancy Pelosi and U.S. Rep. Ted Deutch invited him to speak to the House Minority about 3D-printed firearms.

Most recently, his prominence gave him a platform, being televised nationally at the Democratic National Convention to stump for Joe Biden, urging voters to have faith that Biden "will take on the NRA again and win. Let's win back our freedom to live without fear."

Guttenberg's family had already learned to cope with tragedy before the school shooting.

His brother, Dr. Michael Guttenberg, was the deputy medical director of the New York City Fire Department, assigned to the World Trade Center site on 9/11 when terrorists attacked the United States. Dr. Guttenberg, who worked in the debris from the towers afterward, died of pancreatic cancer linked to airborne toxins at ground zero at age 50.

His death came just four months before the Parkland shooting.

But while Michael Guttenberg worked that tragic day in 2001, Fred Guttenberg said that's when the family got their first glimpse of a "helper." A stranger approached the first responders, took down their family's information and called parents and relatives to assure them their relative was alive.

Fred Guttenberg's helpers have been numerous, such as former Vice President Joe Biden, who himself had experienced profound loss. Biden called him 10 days after the murder. "He spoke to me with so much empathy and understanding, I felt like I'd known him forever," Guttenberg wrote. When they got to meet in person, Biden told him "about mission and purpose and how that had helped him to get through his own grief. This discussion has played a big role in forming my path forward."

And there is actor Bradley Whitford, who has starred in "The West Wing" and "Handmaid's Tale." He met Guttenberg at a 2018 conference.

Whitford was wearing his Orange Ribbons For Jaime pin, and told Guttenberg he supports the fight for gun safety.

"He did not know it at the time, but I'd been feeling discouraged," Guttenberg said. "I had good days, and then I had terrible days. Seeing him wearing this pin inspired me greatly, as it let me know that people across the country were paying attention and were supportive of what I was trying to do. Unexpectedly encountering him like this gave me the energy to keep going."

Among Guttenberg's coping tips, revealed in the book:

Find the helpers. "They will assist you in ways you can't imagine and don't expect," he writes. Not just the powerful, but "your loved ones, your family members, your neighbors, your colleagues, people from your church or temple congregation, or even total strangers."

Know that helpers can come when you aren't expecting them. Firefighters in full dress uniform attended the funeral and Guttenberg's son was a member of the Broward Sheriff Fire Cadets. "The thing about helpers is that they can show up unexpectedly. For my son, this act of kindness and love from the first responder community was something that helped him get through the hardest day of his life."

Be willing to accept help. "I never thought of the people who surround me as helpers until after Jaime died. Now that I understand that we all have our helpers; we only need to be willing to look for them and accept the help."

Guttenberg said he is still working on his mission. "I've decided to be a helper, and I won't stop fighting until the world is better. Two years in, I'm only now getting started," he wrote.

As much as the Jewish-born Guttenberg has learned to cope, he said he struggled with his faith after his daughter's death and stopped attending synagogue.

"My faith in people is stronger than ever."

Fred Guttenberg, whose 14-year-old daughter, Jamie, was murdered in the Parkland school shooting, holds a copy of his book "Find the Helpers."

Fred Guttenberg describes in his book those who helped him through the loss of his daughter, and his brother, who died from 9/11-related cancer just months before his daughter was killed.