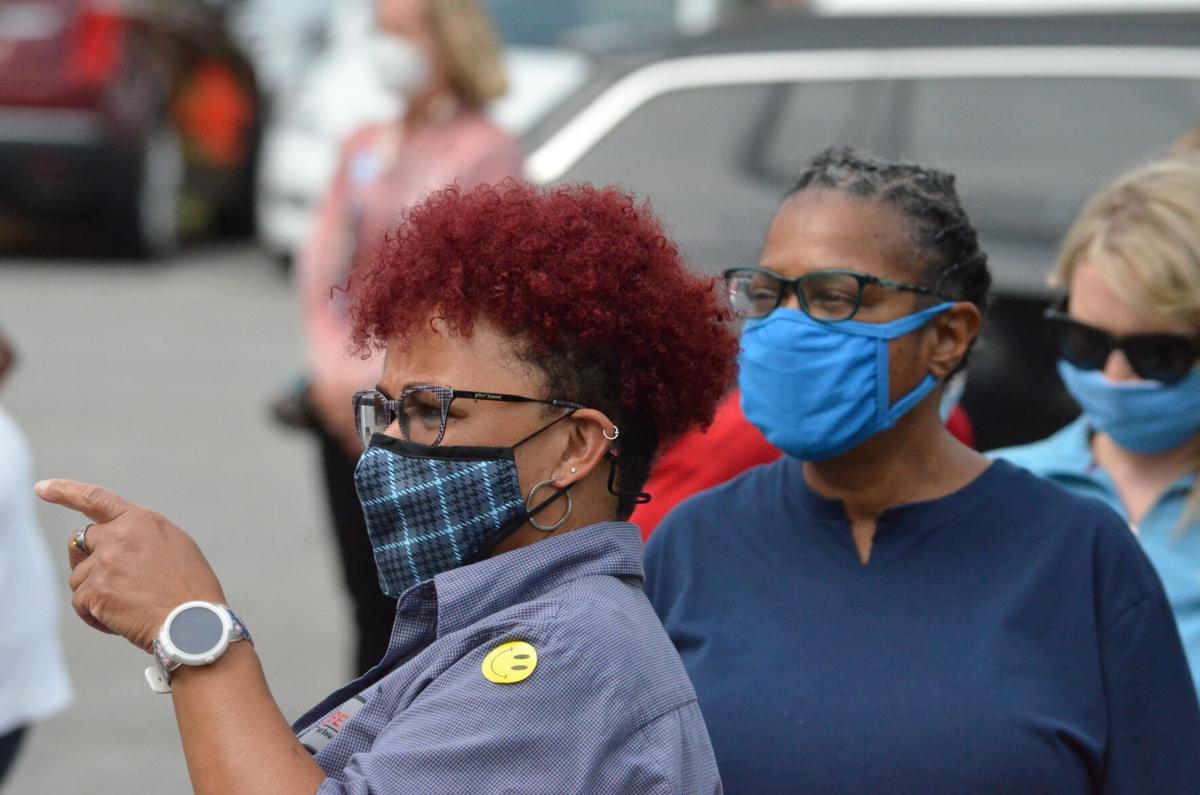 Stephanie Turner and Gwen Turner stand in line at the Board of Elections in Statesville on Thursday. 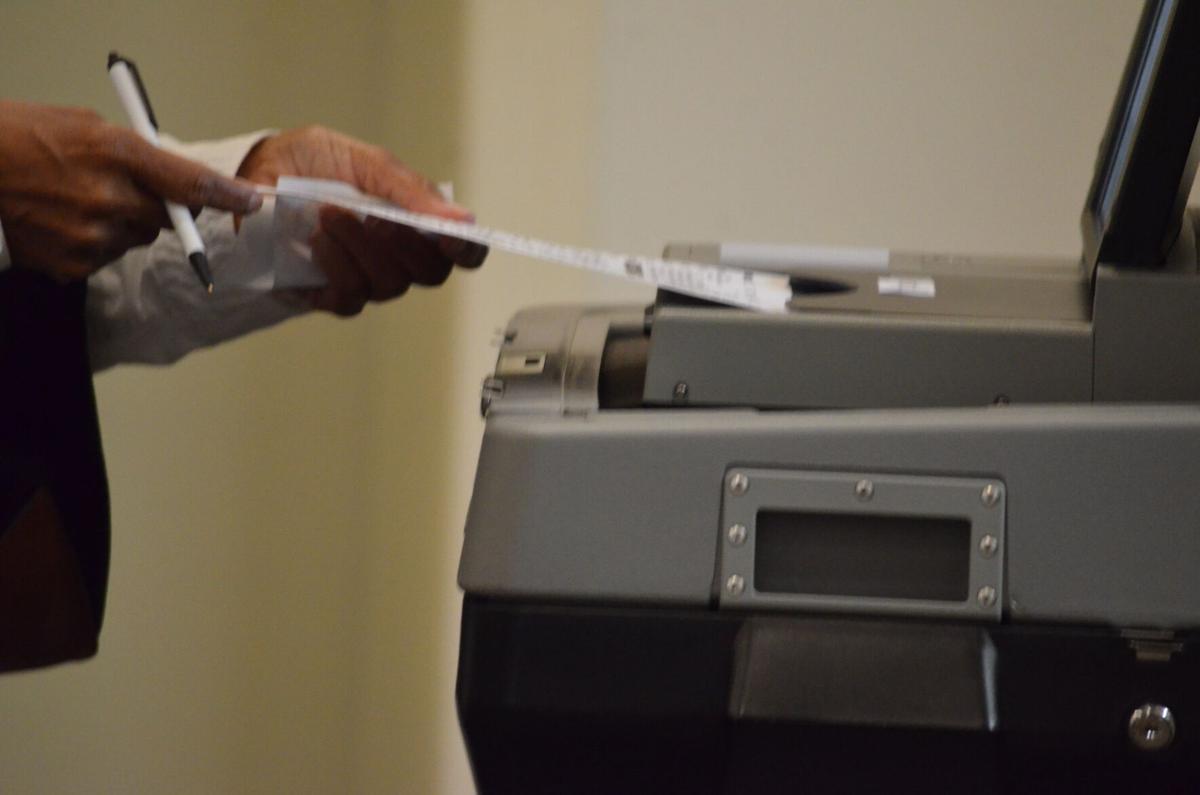 A voter prepares to submit their ballot on Thursday in Harmony. 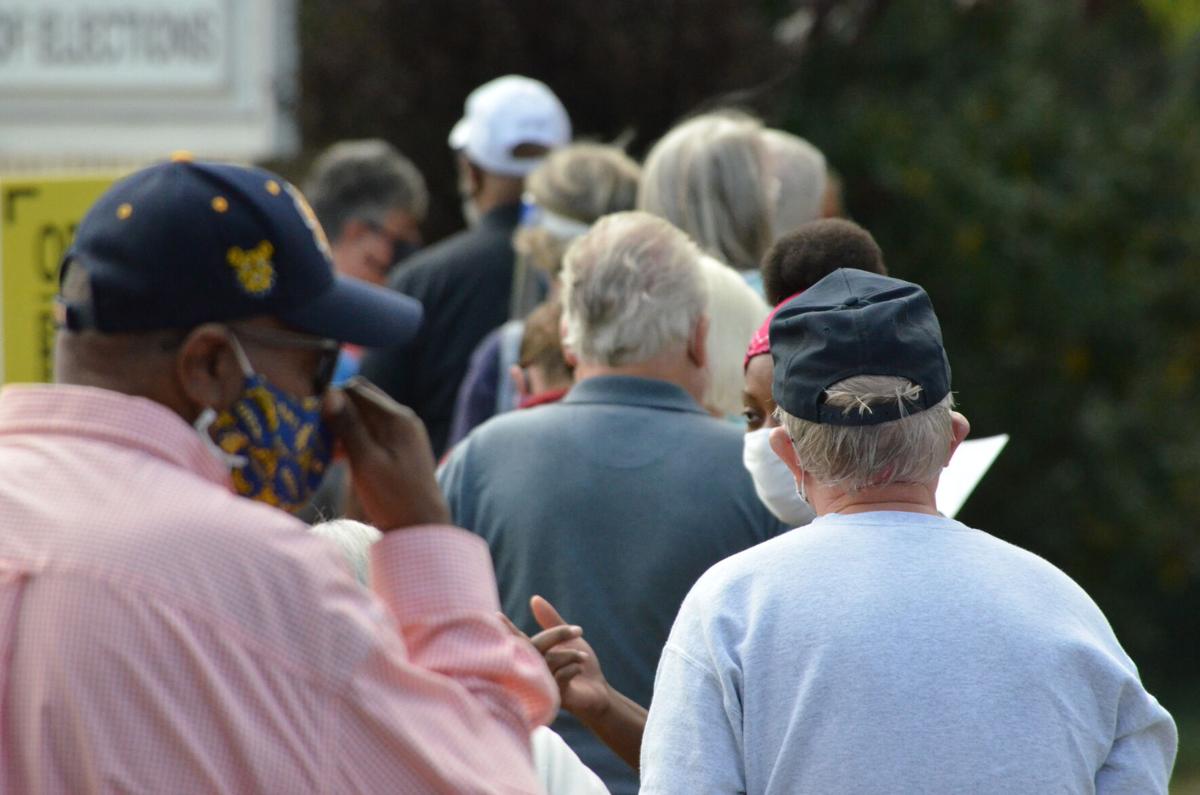 People stand in line at the Board of Elections in Statesville when early voting opened last week.

Iredell County is anxious to vote in this year's election if the 11.2% increase in early voting is any indication.

Voters took advantage of early voting on Thursday as 6,571 people cast their votes at the county's six early-voting sites according to the local Board of Elections.

A total of 333,466 voters had cast ballots on Thursday according to the North Carolina Board of Election. The first day of early voting in 2016 saw roughly 166,000 voters.

Local turnout has favored the GOP as 46.2% of early voters were registered Republicans compared to the 29.9% share of the registered Democrats voting. The remaining nearly 32% of voters on Thursday were unaffiliated voters.

In the last presidential election, a total of 46,837 voters had their ballots submitted during the early voting period. President Donald Trump won Iredell County with 66.31% of the 82,567 votes cast in 2016 compared to Hillary Clinton's 29.96%. Gary Johnson had 2.65% of Iredell County's votes while write-ins made up 1.08% of remaining votes for president.

Local GOP optimistic, but not celebrating

The numbers so far favor Republicans locally, but that doesn't mean they're ready to celebrate just yet.

"I am thankful so many Iredell Voters have voted already," Ron "Duck" Wyatt said. "The numbers look favorable but realistically are still concerning if we just make assumptions based off registration."

He also said he appreciated the work Becky Galliher and her Board of Elections staff put did to prepare for early voting.

"With COVID being what it is, I am optimistic that Iredell voters still want their voices heard," Wyatt said.

He added that the agreement with local democrats to not have electioneering near polling sites was well received from who he had communicated with. Neither party was officially handing out materials at the voting sites, but at least one person was seen at the Board of Election with a voter guide for Republican candidates. However, they were not approaching voters in line as often has been the practice at many polling sites in previous years.

Iredell County would be considered a "red" county due to it's Republican leanings, but local Democrats are still ecouraged by what they've seen in early voting as well as activity at their headquarters.

"I’m thrilled with the high turnouts and hope that it continues.  I feel like more and more were seeing folks at our headquarters and getting phone calls, from Republicans even, who are ready for a new direction, people who didn’t vote in the last election or people who voted for the other side but who have decided it’s time for a change at all levels," Beth Kendall said. She is the Chairperson of the Iredell County Democratic Party.

"The numbers of each party voting gives us a guide, but I don’t think party is the ultimate decider this time. Our local Democratic Candidates are great people who have the same concerns you and I have — keeping our families safe, making sure our kids are getting a great education, making ends meet. They put ideas and people over ideology and they're asking Iredell County Voters to give them a chance."

Keeping an eye on polls in close race

On the national level, Democrats are excited by the early voting numbers in North Carolina.

North Carolina is still considered a swing state, with Trump winning by 3.66% of the vote in 2016. Democratic challenger Joe Biden has put the state high on the priority list this year.

"Yesterday we saw record turnout across the state — over 330,000 people voted early in person, more than double this time last year. We are encouraged by the strong statewide advantage in the number of registered Democrats voting early, but by no means are we slowing down," Biden for President North Carolina State Director LT McCrimmon said. "North Carolina is critical to sending Joe Biden and Kamala Harris to the White House, and we need to make sure all voters are able to cast their ballot. Our campaign will be working nonstop until Election Day to ensure every North Carolina voter has the opportunity to make their voice heard."

Money has poured into the state according to a story by National Public Radio earlier this week. Trump and his allies have spent more that $65.4 million while Biden's side spent $45.4 million so far.

The Biden campaign has said they are setting up "the largest voter protection operation at the polls in the history of North Carolina" with their Voter Protection Team and have legal volunteers in all 100 of the state's counties. The campaign's team said they made over 25,000 calls already to provide information on how to vote.

The website FiveThirtyEight.com currently has Biden averaging 49% in the polls to Trump's 45.9%.

In the U.S. Senate race between Democratic candidate Cal Cunningham and incumbent Republican Tom Tillis, FiveThirtyEight has Cunningham as a slight favorite with a 67% chance of unseating Tillis.

Stephanie Turner and Gwen Turner stand in line at the Board of Elections in Statesville on Thursday.

A voter prepares to submit their ballot on Thursday in Harmony.

People stand in line at the Board of Elections in Statesville when early voting opened last week.