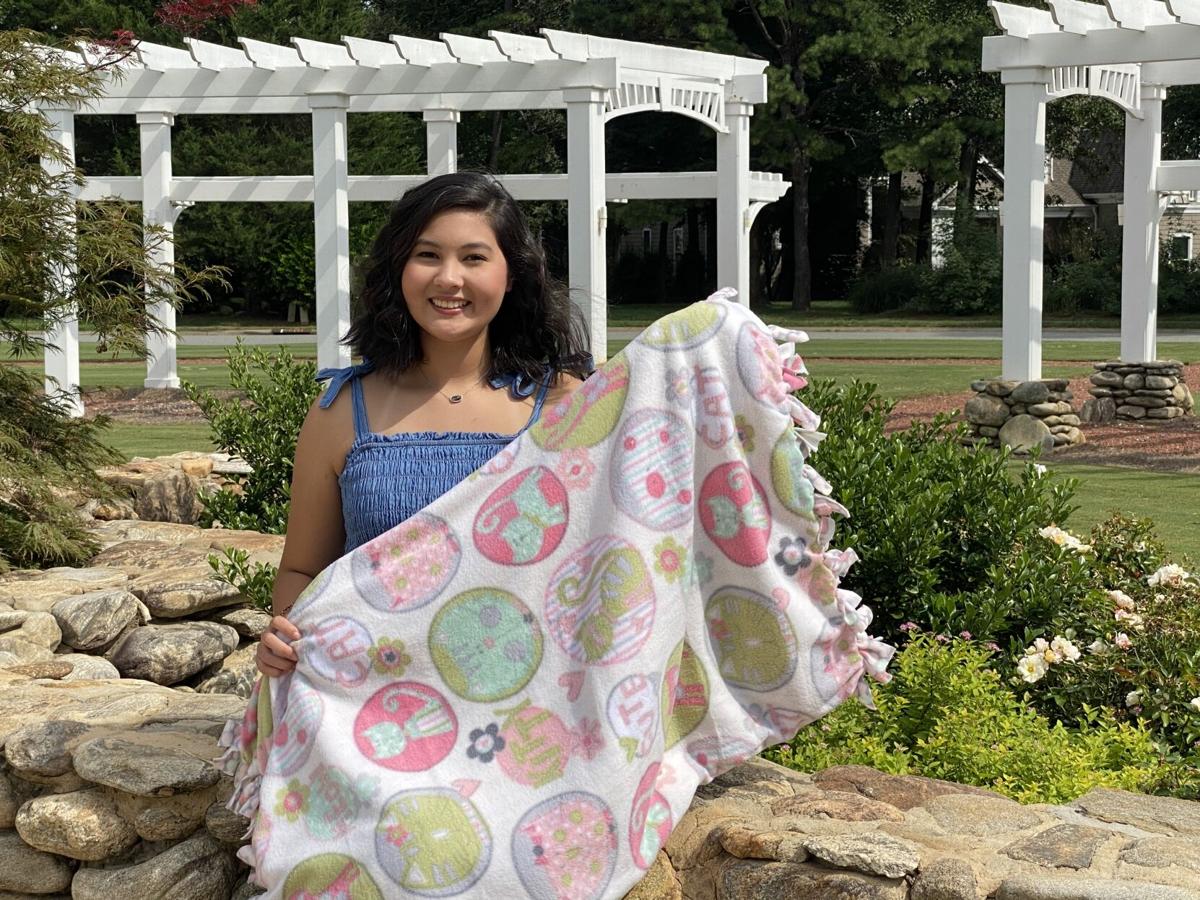 Se'ri Jung has produced more than 100 blankets for children in hospitals since 2018. 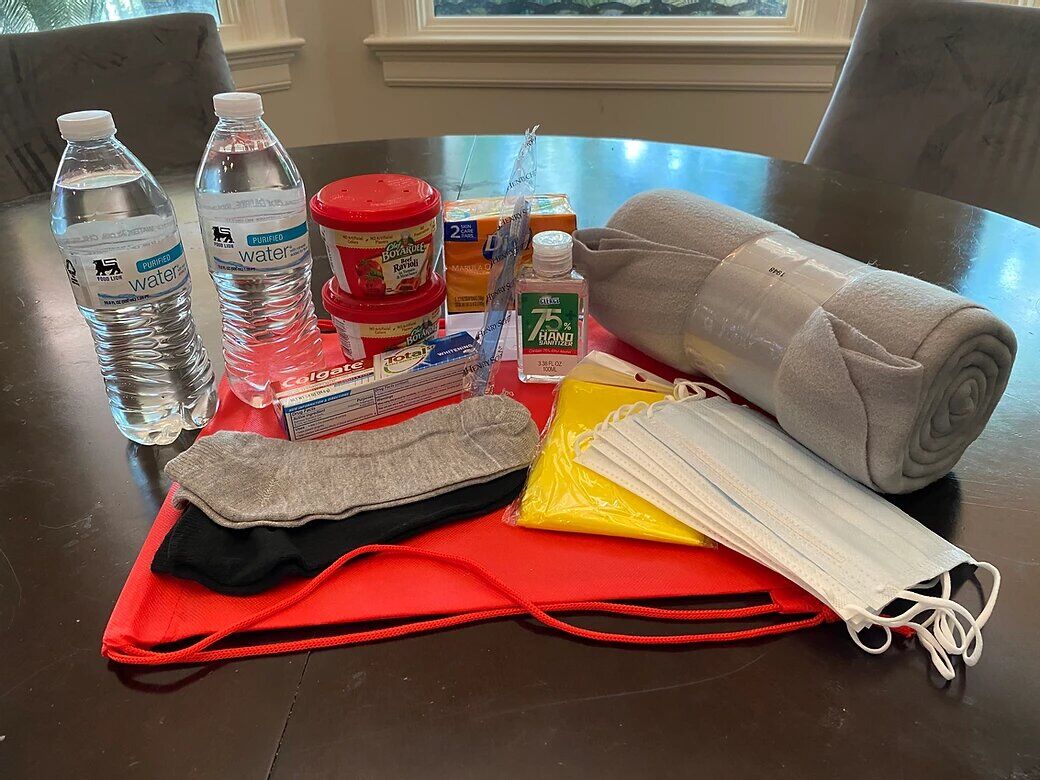 An example of the contents of a Grammy's Hands care package.

In 2018 as a 14-year-old high school sophomore, Se’Ri Jung knew that she wanted to volunteer her time to help at local children’s hospitals. However, she quickly hit a snag.

She was too young.

The children’s hospitals in the area were unable to grant her the ability to volunteer because she was not of age.

Jung, now a senior at Lake Norman High School, came up with another way that she could help the children in the hospitals without even setting foot in their rooms.

“I still wanted to help somehow, I just needed to find a more indirect way,” Jung said. “ So I came up with the idea of making blankets.”

That single idea is how Jung’s organization, Grammy’s Hands, was born. Named to honor her grandmother, who inspired Jung to always do the best she could for her community, Grammy’s Hands has made and distributed more than 100 blankets since 2018.

“I knew a lot of kids, when you’re in the hospital, you want some comfort and I’ve always found blankets very comforting,” Jung said. “I also felt like blankets would be the best way to go because they can be used by all ages.”

After some trial and error in both measuring and sewing blankets for kids of all ages, even ranging down to premature babies in the Neonatal Intensive Care (NIC) unit, Jung is touched by the feedback she gets from hospital workers and how well received the blankets have been by the kids.

Knowing that not only could these blankets help kids through a very tough time, they could become lifelong and treasured possessions puts a smile on Jung’s face.

“Knowing that something as simple as a blanket can put a smile on a kids face really warms my heart,” Jung said. “It makes me really happy knowing that I really did something.”

But even all of the smiles that her blankets put on the face of children wasn’t enough for Jung. She knew there were even more people she could help. After the initial success of Grammy’s Hands making blankets, Jung learned about the prevalence of homelessness in Iredell County.

“It kind of set me back. I realized there is something I could do to help with this,” Jung said. “I should be able to help and take a little bit of stress off of them.”

This led Grammy’s Hands to begin putting together care packages in backpacks for 5th Street Ministries in Statesville.

The packages include a blanket, two water bottles, two packages of canned food, two bars of soap (and a container for a bar of soap), two pairs of socks, a toothbrush and some toothpaste, a poncho and, since the beginning of the pandemic earlier this year, masks and hand sanitizer.

Grammy’s Hands has donated over 300 of those backpacks to 5th Street Ministries as well as shelters in Concord and Salisbury.

Many of those came this year, after the initial outbreak of COVID-19, when Jung decided that it was a good time to try her hand at fundraising for her charity organization. Prior to this summer, the Jung family had funded all that Grammy’s Hands had produced over its almost two years of operation.

However, earlier this year, she started a donation campaign that ended up raking in $4,500 in initial donations with a current donation total of $5,200. According to her website, Grammyshands.org, the first round of donations allowed the purchase of 1,500 masks, 300 bottles of hand sanitizer and 200 bars of soap that were donated to two different shelter locations.

The organization was also able to use the remaining money to write a check as a monetary donation to those shelters.

“The response that we got was a lot bigger than what I was expecting,” Jung said. “I think that it shows that a lot of people want to help, they just don’t know how and I think that was reflected in the response.”

“It also felt good knowing (getting them PPE) gave them one less thing to worry about,” Jung added. “It gives them peace of mind knowing they have these masks and these hand sanitizers to protect themselves so there’s not another stress of having the virus.”

Despite being a senior and having big plans, and medical school dreams, for college, Jung hopes to not only continue Grammy’s Hands in Iredell County in the coming years, she wants to expand its reach to whatever area she will continue her education in next year.

“I hope to get more support from students wherever I go to make (Grammy’s Hands) bigger and impact even more people,” Jung said.

Grammy’s Hands, if Jung has her way, will continue for many years.

All the people she has been able to help, in one way or another, because she just happened to be too young to volunteer at a children’s hospital.

“I would just say that if anybody wants to help people and you don’t know how, there’s always a way. Even if you have to change your plans like I did,” Jung said. “I always wanted to volunteer in the hospitals, but I wasn’t allowed to.

“I still found a way to help anyway.”

Se'ri Jung has produced more than 100 blankets for children in hospitals since 2018.

An example of the contents of a Grammy's Hands care package.