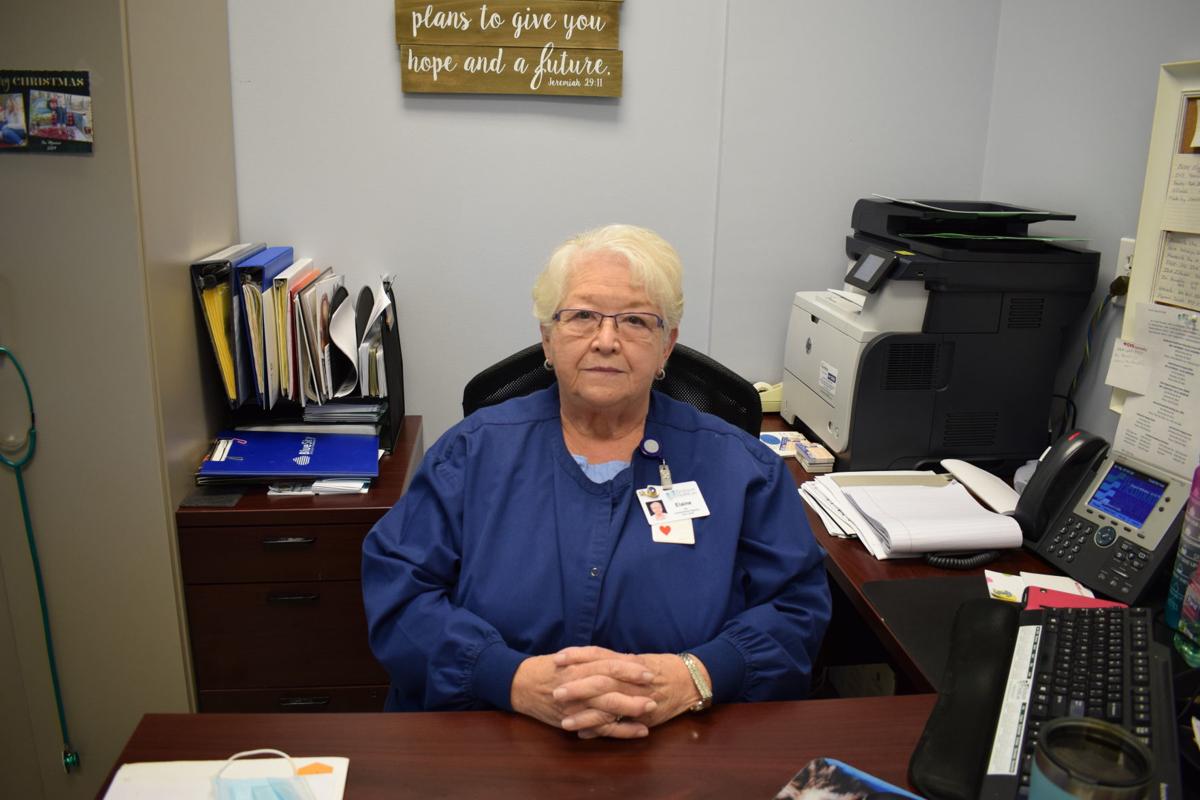 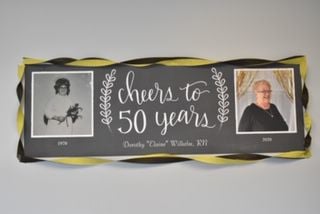 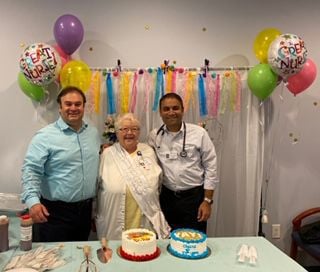 Elaine Wilhelm always wanted to be a nurse. It was her childhood dream and then her goal as a high school student. In 1970, she achieved that goal. And five decades later, she’s still at work at a career she loves.

Since then, she has seen many firsts in the field, mentored and been mentored by many nurses, and achieved personal and professional excellence.

Continuing legacyWilhelm started nursing at Lowrance Hospital in Mooresville in 1970 and moved on to work at Iredell Memorial Hospital for 42 years. Five years ago, she retired and started working at Piedmont HealthCare’s Comprehensive Digestive Care Center.

Wilhelm said Arnold Nunnery and Becky Johnson mentored her in the ’70s, and in turn, she mentored several nurses at the hospital and is mentoring three certified medical assistants who are planning on going to nursing school in the future.

“I’m so happy that I’ve kind of pushed them along to develop their skills,” she said. “I like that. I like to mentor people. I like to help people just as Becky Johnson helped me to grow.”

Wilhelm said the first year of nursing is the hardest.

“You thought school was hard, but this first year, you’re going to ask yourself: ‘Can I do this? I have people’s lives in my hands. I’m taking care of people. Am I going to recognize a symptom?” she said.

Mentorship in nursing helps new nurses gain confidence and develop the skills of the trade with guidance. Wilhelm said that just like any other career, there are aspects of nursing someone has to learn on the job rather than at school.

Seeing nurses achieve is rewarding. Wilhelm said it was nice to think she played a role in nurses’ growth.

She remembered attending a graduation ceremony for Mitchell’s nursing program. One of the new nurses was a previous employee Wilhelm encouraged to go back to school. When the graduate saw Wilhelm, they gave her a grin. Now, that person is a charge nurse.

Wilhelm said there are a lot of people like that nurse whom she has helped grow.

“It makes me proud when I see people go on,” she said. “I tell people, when you get ‘RN’ (registered nurse) behind your name, you need to respect that. No matter where you are, you need to remember your profession and be proud of it and reach for the stars.”

Witness to innovationWilhelm has been following her own advice throughout her career. In her time at Iredell Memorial, Wilhelm saw many changes to the field. When she first started, medical professionals did not wear gloves as regularly as they do now. Intravenous liquids were not as common. Of course, technology, computers and the internet changed a lot of practices in the medical field as well from medicine distribution to making notes on a patient’s chart.

The technological innovation is good and helpful. Wilhelm said, especially when computers were first introduced, learning how to use computers during a patient’s care was a challenge. However, once nurses adapted, technology made the job easier. Just the ability to quickly gather information about medicines with an internet search is a big improvement.

“One thing with nursing I think you’ve got to remember is it is still hands on,” Wilhelm said. “When you’re holding a person’s hand that’s dying, that means a lot to the family, to the patient, that you’re there at the bedside until somebody gets there. I’ve had nurses to pray with patients, to sing, to comfort them. I think that’s the biggest thing in nursing. To be a good nurse, you not only need to know all the technology and all the basic stuff, but you still need to have that hands-on, caring approach. That means a lot to a patient.”

Nurses are there to support patients and help them get better. For those who don’t, nurses need to support the grieving families. Wilhelm said offering that care and support is one of the biggest parts of nursing.

Wilhelm said people thought she was tough when she was still working at the hospital.

“I just wanted to follow the rules, and take the best care of the patient and develop (my employees’) skills,” Wilhelm said. “I have so many nurses that have moved on in their career. They’re now nurse practitioners. They’re directors of the floor. It makes my heart feel good to see them grow.”

Wilhelm managed about 90 people as a director at Iredell Memorial. She said the biggest challenge was managing the budget, and the one thing she would go back and do differently in her life would be to get her bachelors of science in nursing to help her prepare for the administrative duties.

“Who would have thought 50 years ago that I would be doing the budget for the floor, that I had under my employment probably 90 people that you had to figure out and make sure your budget was okay?” Wilhelm said. “That was a big change, believe me.”

Achievements and memoriesApparently, her peers understood Wilhelm’s goals and practices, even if she was tough. She received Iredell Memorial’s Nurse Excellency award. Wilhelm said she was very proud of that award. She wears the pin she received when she was recognized on her badge.

When thinking about her achievements, Wilhelm started talking about her happy memories as a nurse. Early in her career, she got to give a premature baby her first bath. She fit in the palm of her hand at 2 pounds 15 ounces. That baby is a grown woman now.

She also recalled one of her saddest memories which was seeing a child die when she was a nursing student.

Once, there was a shooting at the hospital. Wilhelm said that was not a scary situation.

Wilhelm also saw historic moments in Iredell’s medical history. She worked at Iredell Memorial when the first AIDS patient was admitted. She said some people were worried about caring for them at the time. Generally, the AIDS crisis was one of the reasons medical professionals started wearing gloves more.

“I could go on and on about stories and things that have happened, but it’s rewarding to have patients to stop me anywhere and say ‘You took care of me. I remember you,’” Wilhelm said. “That really makes your heart feel good that they remember you, and you helped them get well.”

Regardless of her professional achievements and memories, Wilhelm said she was most proud of raising two sons.

Following the callingWhen Wilhelm was retiring from Iredell Memorial, doctors from Piedmont HealthCare’s Comprehensive Digestive Care Center asked her to join them as an office nurse. Wilhelm said she had never worked in an office before, but she applied and interviewed for the job.

“I wasn’t ready to retire, but I needed to retire from the hospital. I needed to move on,” Wilhelm said. “I was offered this position, and I have learned so much about the liver, GI (gastrointestinal) medicine.”

At the digestive care center, she serves patients with Hepatitis C, getting them started on treatment and educating them. Wilhelm said she also assesses patients who call the office, giving them advice on the phone and deciding whether they need to schedule an appointment with the center or go to the emergency room.

Working in a hospital and an office is totally different. Wilhelm said the first winter she started working in the office, it was great to be able to sit at home and watch the snow fall instead of figuring out how to commute in it. Hospitals stay open in inclement weather. The office doesn’t.

Wilhelm said she drove through Hurricane Hugo in 1989 to get to work.

Her responsibilities changes as well. As a director, she was thinking about her job all the time. Wilhelm said she was called into the hospital at 2 a.m. one time when someone got sick.

While she isn’t constantly on call, Wilhelm said her position as an office nurse isn’t strictly 9 a.m. to 5 p.m. She has to make sure all the patients are taken care of and is often in the office after 6 p.m.

Recently, a nurse from Iredell Memorial asked Wilhelm if she was ever going to retire. Wilhelm said she wouldn’t if she could help it. She knew the day would come where she would need to, but she would keep working until then. If she left, she couldn’t take care of patients which are her favorite part of the job.

“I love people,” Wilhelm said. “I like meeting people. I hardly ever meet a stranger. I’ll just start talking to them.”

Office manager Mary Ann Guthridge said nurses who knew her in the hospital and Wilhelm’s current patients ask to see her.

The office threw her a party in June and kept a banner up for a few days with a picture of her when she first started nursing and a current photo. The party was a surprise, and Wilhelm was grateful but treated it like she did the interview, with dismissive humility. She did not need so much recognition for doing a job she loved.

“I love nursing,” Wilhelm said. “If I had to do it over again, I would still do nursing.”

A knock signals a hot meal is about to come through Wade and Evelyn Campbell's front door. The two seniors are recipients of meals as part of …

The number of positive coronavirus cases grew by 35 since Wednesday afternoon.

The number of coronavirus cases in Iredell rose by 49 since Wednesday.

The Iredell County Health Department received notice of a COVID-19 outbreak at Maple Leaf Health Care, a long-term care facility. At this time…

A total of 26 new cases of coronavirus were reported in Iredell County since the state’s Saturday afternoon update.