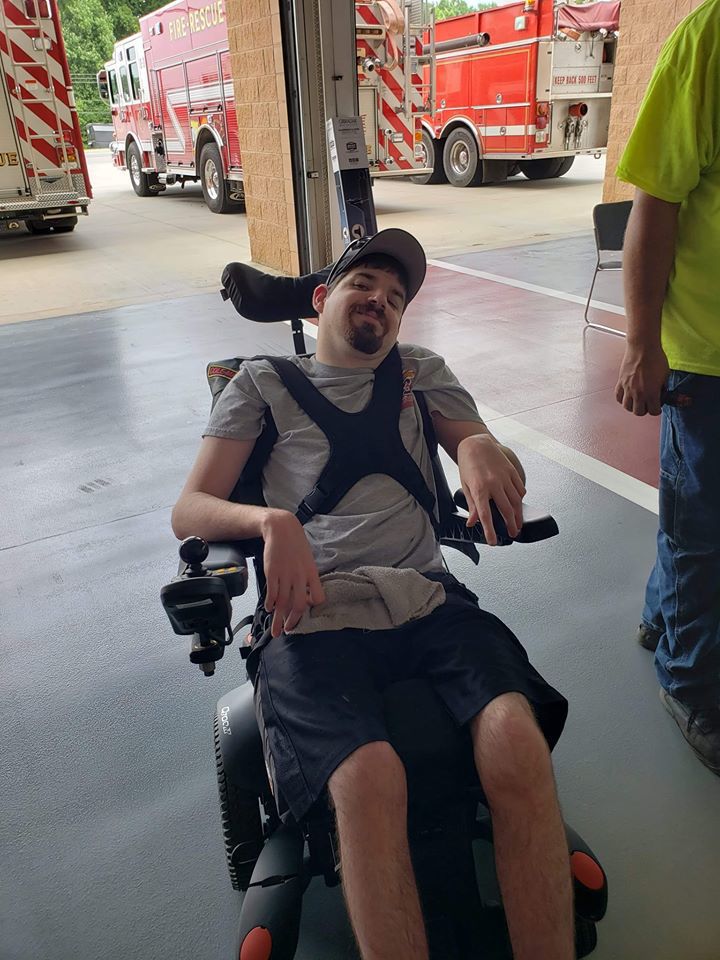 Cole Reavis is all smiles as the poker run came to an end at Shepherds Fire Department. 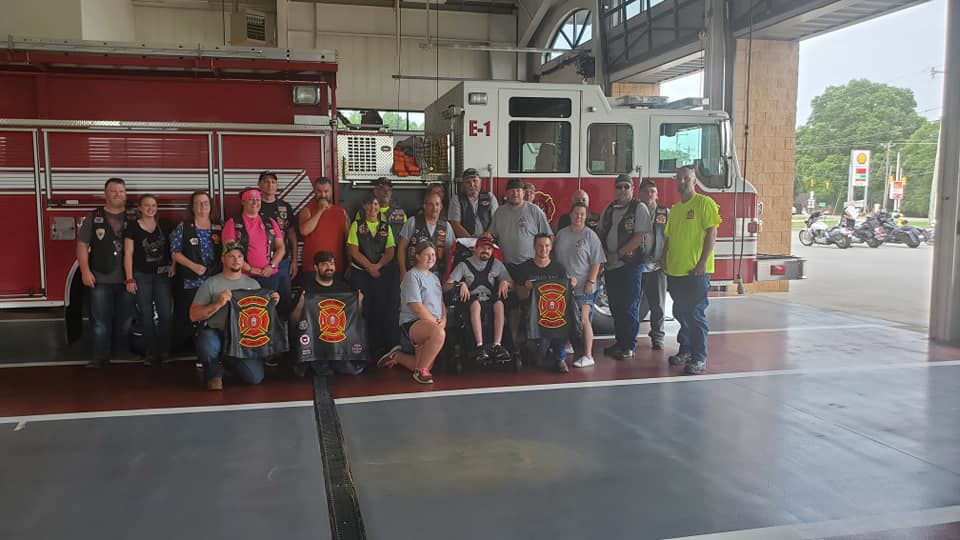 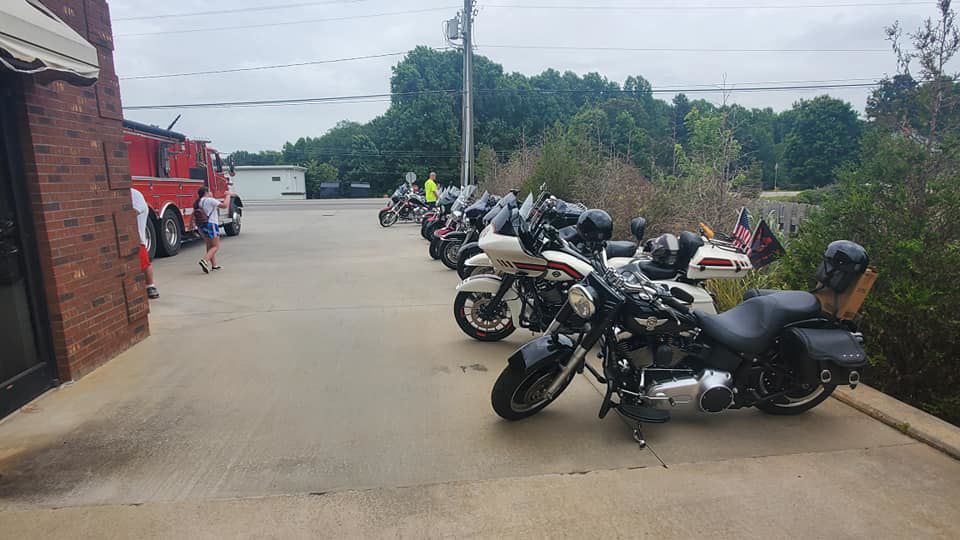 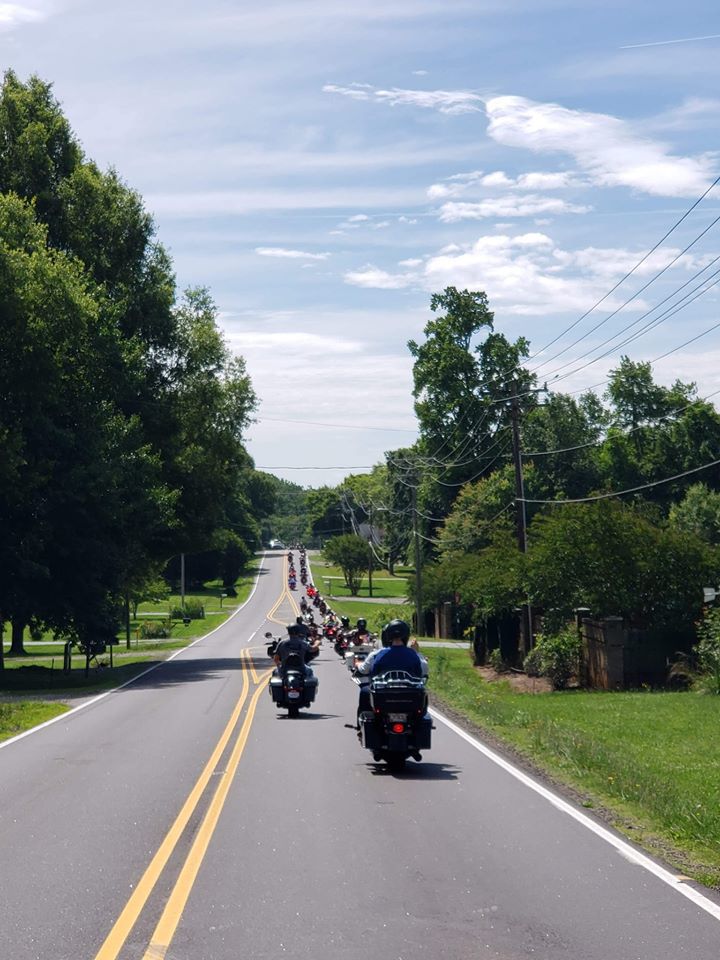 A line of motorcycles go down the road.

Cole Reavis is like any young adult. He loves the Georgia Bulldogs and is one of their biggest fans. He also enjoys being around people and brings joy to anyone who meets him.

But Reavis, 28, has more challenges than the rest of us face. He was born with cerebral palsy and suffers from grand mal seizures. When a seizure strikes, it can be traumatic and even life-threatening. He used to have a service dog who would alert his caregivers of a seizure, but the dog passed away from old age and is truly missed.

A new companion that can serve Reavis’ needs costs close to $20,000. Although a GoFundMe page has raised more than $1,400, the family needed more funds to buy and train a service dog.

That’s when the Red Knights Chapter 13 came in. The Red Knights are a group of motorcycle enthusiasts who are also firefighters, either paid or volunteer. Reavis’ parents are members of Chapter 24 and of Ellis Cross Fire Department.

The members of Chapter 13 were touched by Reavis’ story and wanted to help his family raise the necessary funds for a service dog, said Jason Mullins, chapter president.

And so, Saturday’s poker run for Cole was organized. Although the group is based in Statesville, the Poker Run included participants that not only spanned across county lines but also state lines. Some participants came from as far away as the northeast to help raise funds.

One of the other motorcycle clubs was the Red Knights Chapter 24. After the Poker Run, they sponsored a raffle for a Henry Golden Boy 22 Caliber Rifle. All of the proceeds went to Reavis’ family.

With their engines roaring and pistons thrusting, approximately 70 bikers made their way from Northside Drive.

“We made our way from Northside Drive, and then the riders went to D&D American Performance in Mooresville, and then to Blue Collar Cycle Company in Salisbury, South Main Customs in Kannapolis and ended at Shepherds Volunteer Fire Department,” Mullins said.

At Shepherds, the raffle was held and the participants in the ride dined on lunch from GrillMore Food Trailer, which is owned by Jody and Kristy Smyre, who are both emergency service works. Jody is Iredell County’s emergency management coordinator and a former paramedic and Kristy is a paramedic with Iredell EMS.

They also were able to cool down with Hawaiian shaved ice.

The poker run was a major success, Mullins said.

Between the bike run and raffle, approximately $7,100 was raised. Those funds will be instrumental in helping his family buy a new service dog.

Mullins said the dog was already secured from Hickory and Reavis went there Friday night to meet his future service dog.

With the dog secured, the poker run and raffle will help with the costs of training the dog to alert to Reavis’ seizures.

“Training the dog can cost anywhere from $5,000 to $20,000,” Mullins said. So that’s why he stepped in to help organize the ride in conjunction with Chapter 24 members.

And thanks to those who spent their Saturday taking part in the ride, Reavis is much closer to getting the companion he needs.

“We got close to our goal to help Cole get his service dog,” Mullins said.

If you would like to donate to the GoFundMe Page, you are encouraged to visit this link: https://www.gofundme.com/f/seizure-service-dog-for-cole.

I am writing to you in reference to the Low Income Housing Tax Credit project that is being proposed for rezoning Vance PO Road. Last council …

Stocks are down sharply on Wall Street as data showing new coronavirus cases in the U.S. have climbed to the highest level in two months rattl…

The maker of a drug shown to shorten recovery time for severely ill COVID-19 patients says it will charge $2,340 for a typical treatment cours…

Bayer to pay up to $10.9 billion to settle Monsanto case

Across Sun Belt, hopes for economy give way to renewed fears

Cole Reavis is all smiles as the poker run came to an end at Shepherds Fire Department.

A line of motorcycles go down the road.