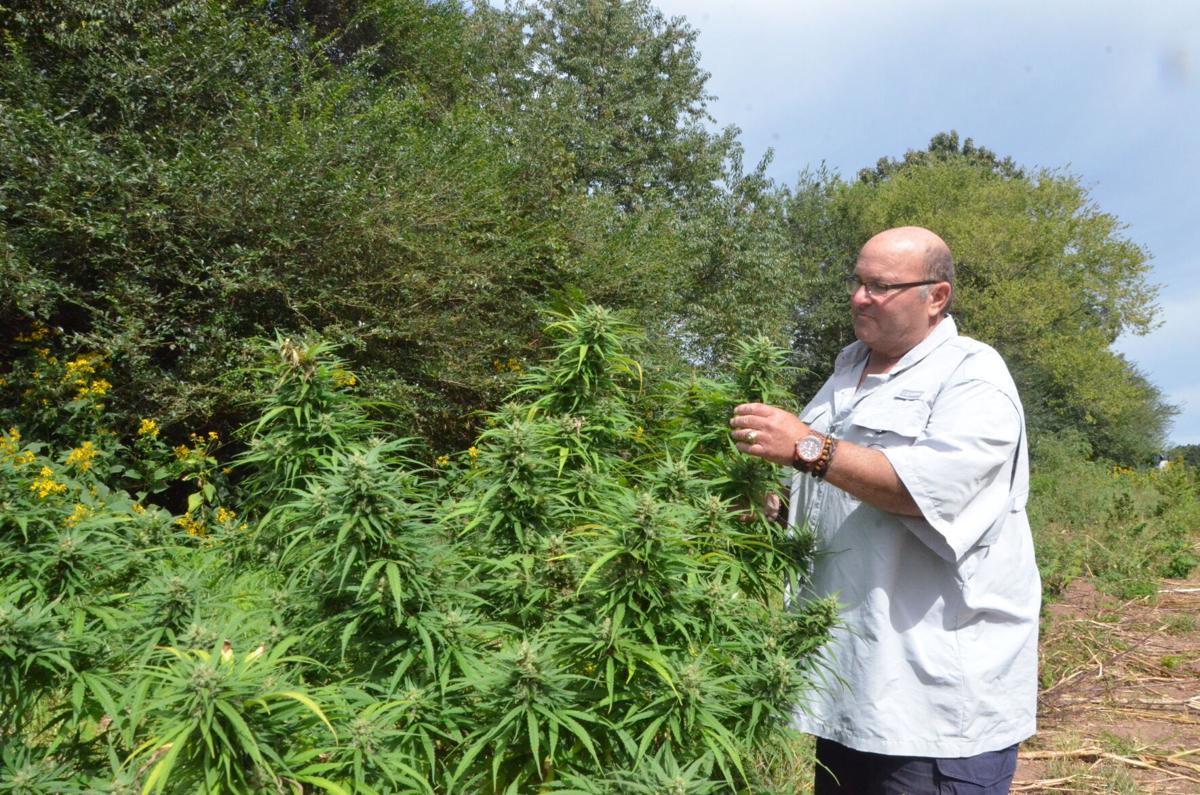 Greg Atkinson inspects one of his hemp plants in September in Statesville. 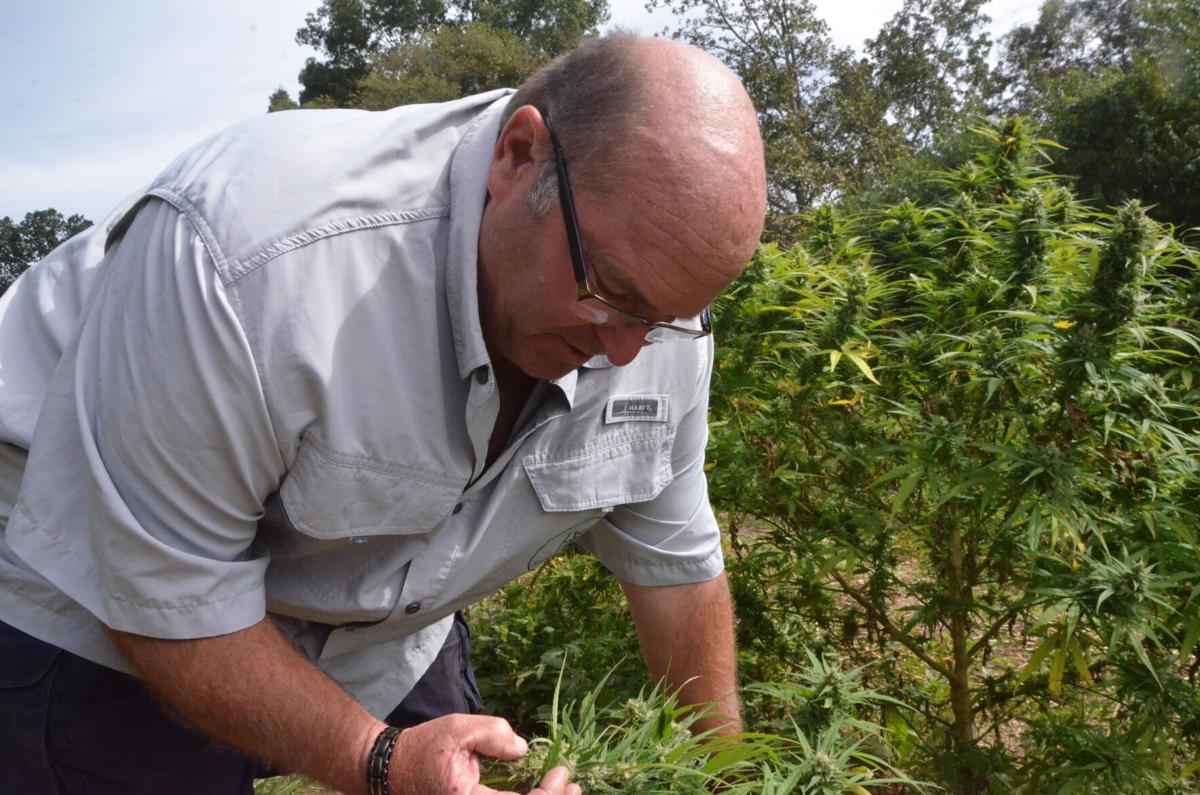 Greg Atkinson inspects one of his hemp plants in September. 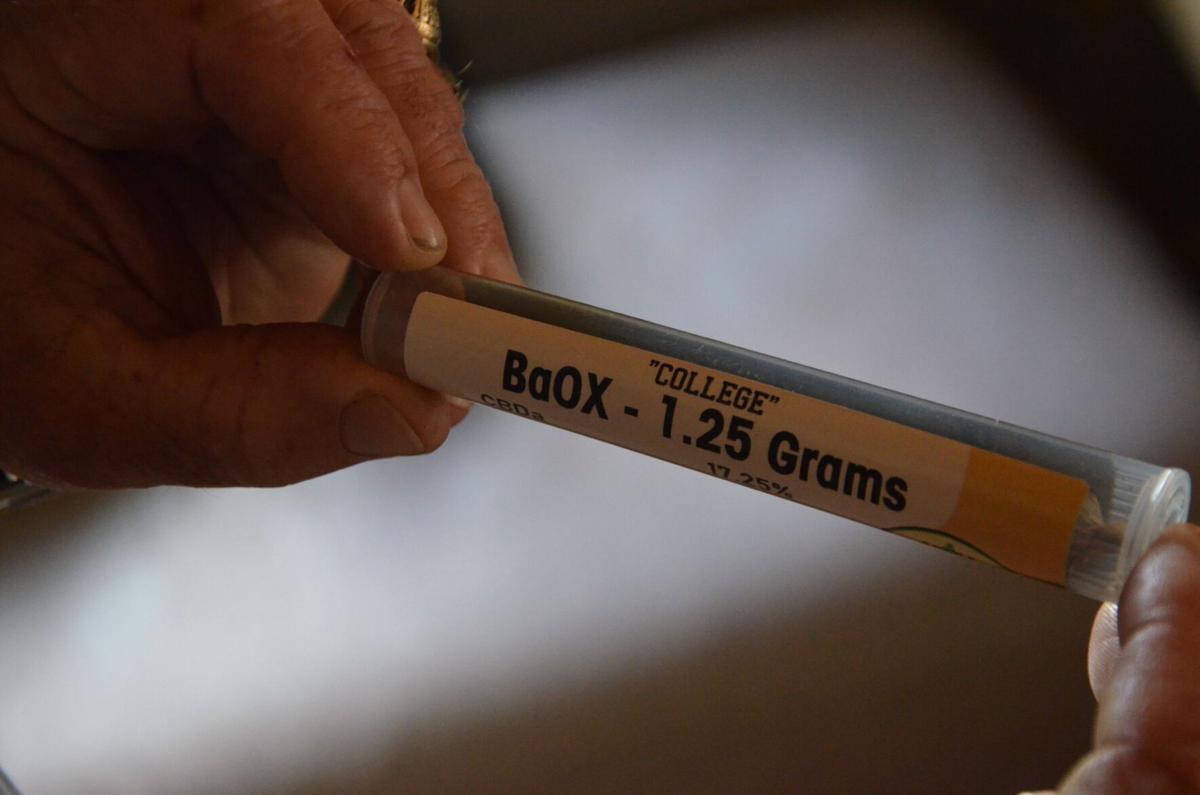 Greg Atkinson holds one of the "pre-rolls" of one of his hemp products. 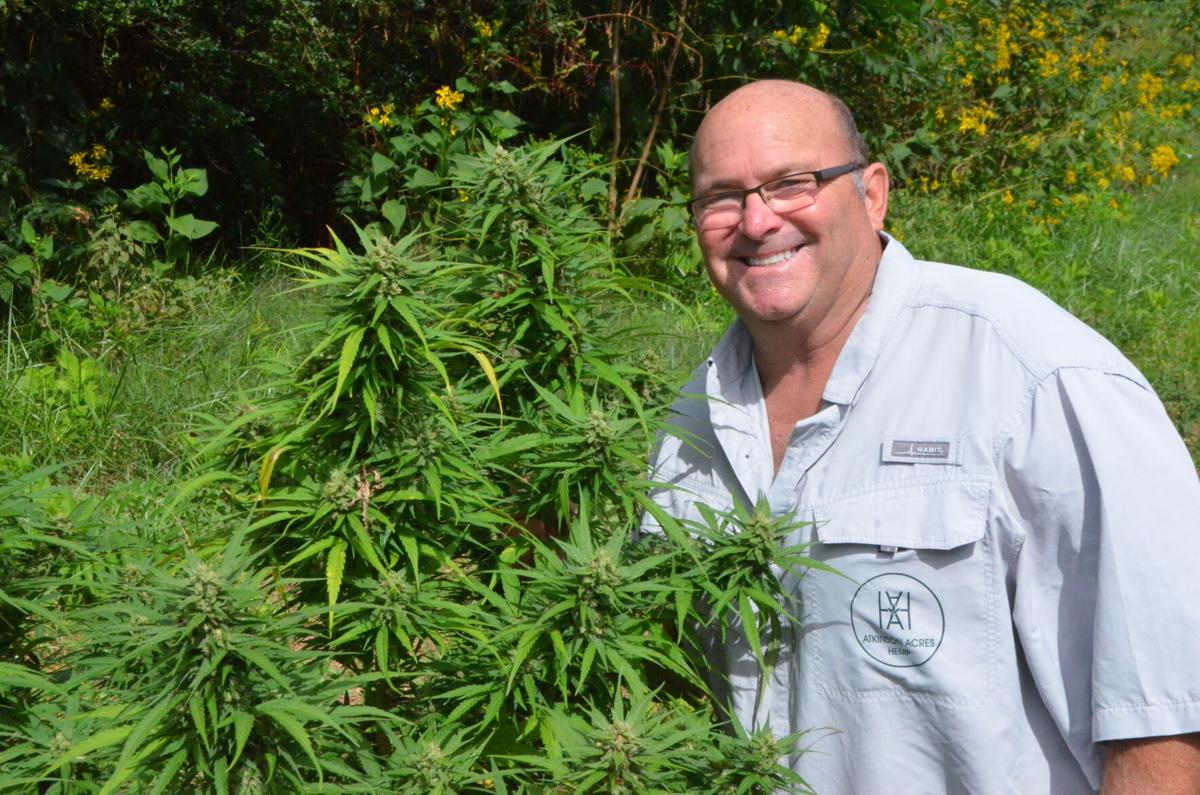 Greg Atkinson poses beside one of his hemp plants in September in Statesville. 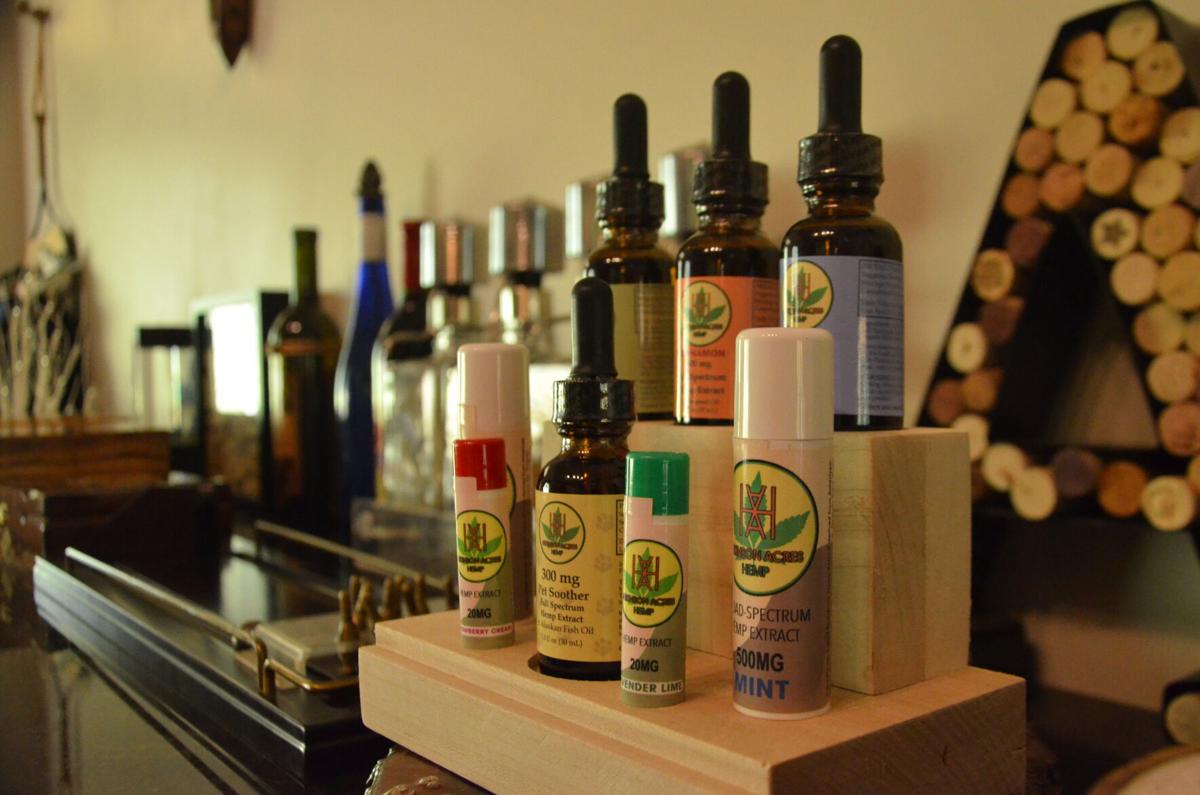 A display of hemp products is shown in Greg Atkinson's home. 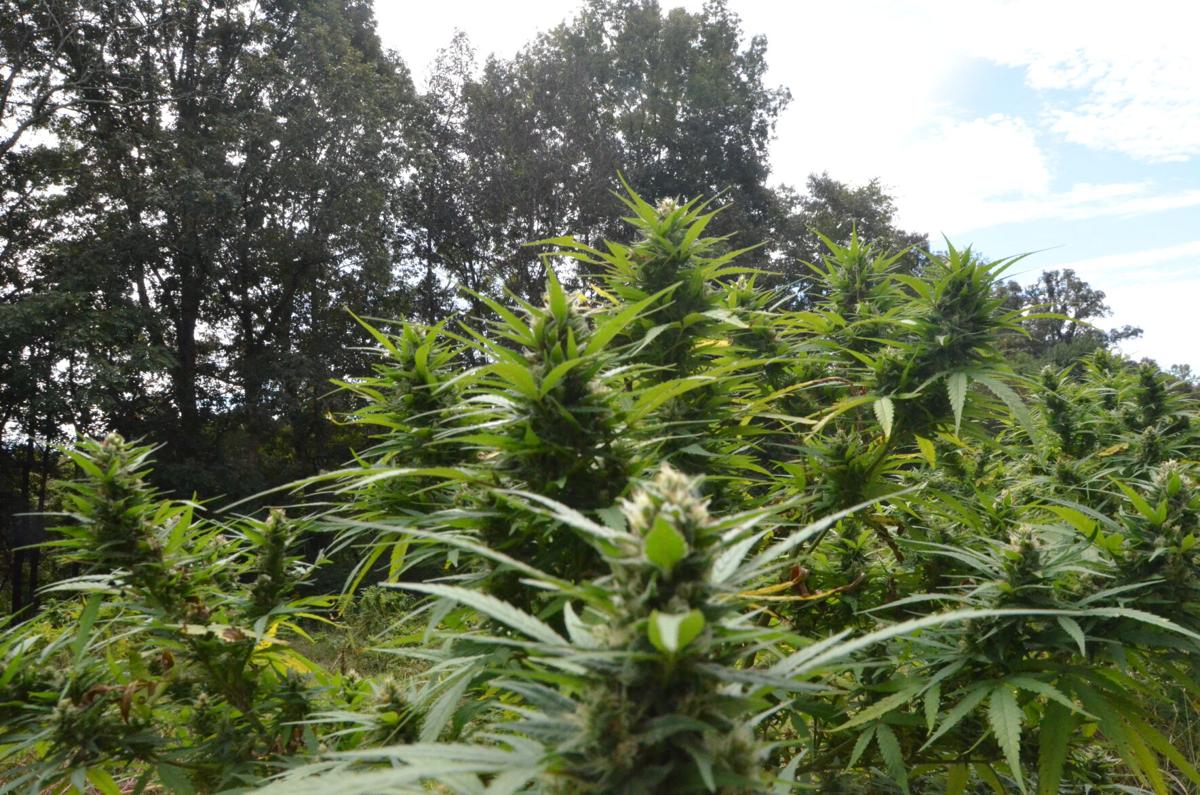 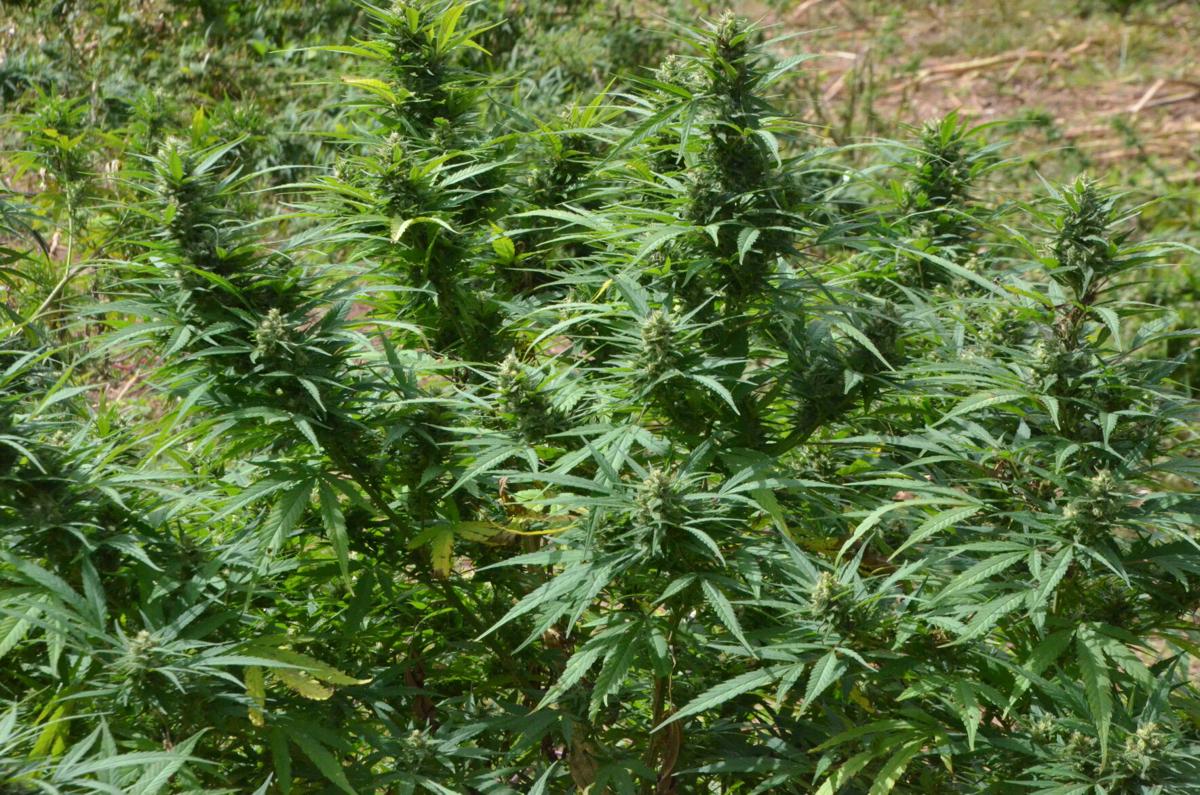 Greg Atkinson was a magician in a former life, and for his latest trick, he is navigating the world of hemp.

Hemp is cannabis, also known as marijuana. However, there are some key differences.

The main being the level of tetrahydrocannabinol, or THC, which is psychoactive. In Atkinson's plants, this level is purposefully kept low for legal and practical reasons. The hemp he grows can be used for a number of products, including many in the medicinal marijuana industry.

Back in September, before the harvest, Atkinson was sorting through the paperwork showing his crops fell under the THC threshold and he didn't need to worry about having any cut down on his farm.

Atkinson's crop was harvested in October and he hopes this year selling it will go smoothly. He said he faced struggles a year ago in this still-evolving industry.

Keeping things on the up and up

Atkinson is legally growing hemp as part of the state's pilot program, but that comes with a lot of regulation.

"We want there to be regulations because we spend a lot of time and money and effort and work to have it. So by having all of the testing, we're covered. In fact, this year, we were able to get crop insurance. We had not been able to do that. There are still some problems federally and locally," Atkinson said.

Ultimately, growing cannabis is in an interesting place in America right now. The USDA has very different rules for the same plant when it comes to the amount of THC in them. The hemp that Atkinson and others are growing is under pilot programs like the one in N.C., but more and more states are legalizing marijuana.

The testing the plants undergo to stay within those guidelines is pretty straightforward. The plants are tested just before harvest for THC, the principal psychoactive constituent of the plant. In layman's terms, that's what gets a person "high" when smoking marijuana. In hemp, that amount needs to be below 0.03% to be legal for sale.

If the plant tests higher than 0.03%, it means the plants from the crop would have to be destroyed.

There's also more testing that has to happen depending on the sort of product it is going to become. Pesticides and other products that might be used on another crop can't be used on hemp. Again, a mistake could ruin an entire crop.

There are also issues with getting loans for his business. While the crop is legal, it's hard to get loans, Atkinson said.

Due to the nature of his crop, some banks and companies are hesitant to get involved. Atkinson said an unnamed bank suggested listing his crop as something else on his application form but that's not something Atkinson would entertain.

"I do grow hemp, I'm not embarrassed about it," Atkinson said. "My mother still thinks I'll end up in an orange jumpsuit. My father is a pharmacist, so he gets it."

Or at least he did after a conversation the two had. When Atkinson first explained it to his father, he said he pointed out the number of deaths attributed to opioids that are often described as painkillers. Atkinson said he doesn't have to worry about someone overdosing from his crop of hemp, even if he was growing a strand with more THC in it.

While it's legal, the current regulations and changing laws make it a moving target when it comes to growing and selling the crop.

"There is associated risk because it's a new industry and because of all of those things of course. It's changing," said Margaret Bloomquist. She is a research associate of horticultural science at N.C. State University.

Some of that risk is bureaucracy as farmers and others like Bloomquist had to wait and see if the state and U.S. Department of Agriculture would continue to keep pilot programs like the one in N.C. going.

"A month ago, we might not have been able to grow under the pilot program after Oct. 31, but they gave another year on the USDA program. So it's risky in that sense," she said.

Bloomquist said that finding good information isn't always easy for farmers because some of the information out there is for hemp grown in climate-controlled environments or in much drier areas than North Carolina. While other crops have years of history here in the state, hemp is a work in progress.

"That's why we work from the technical side as scientists to encourage growers to share their stories and learn amongst themselves but also try to keep records of these things and use statistics and other tools to make sense of them and give growers as much information as they can to be successful," Bloomquist said.

She does see the future for the crop beyond what it is now in the state, despite some of the challenges here.

"North Carolina is one of the top agricultural states. We're creative or innovative, and we have good farmers and background knowledge. We can grow this crop for a number of applications," Bloomquist said. "We're just in a place where those industries have to level up so that it's economical for our growers.

"Public perception of the plant is something that I don't know — may or may not change. However, we have continued scientific research that shows that it has benefits for all of these applications. So I'd say that’s optimistic, but don't put anything in that you can't afford to lose."

While Bloomquist and the state help advise and educate farmers, there are still plenty of challenges for farmers like Atkinson.

But a deal to buy his crop fell through, forcing Atkinson to recalibrate. Fortunately, he says, hemp that is properly dried and stored has a long shelf life.

"There's 50,000 plus uses for hemp — from rope and shirts, and on and on. They are building in Asheville. They're building houses now with hempcrete because it breathes well, helps people with allergies. We have drops and capsules, icy hemp gel, we have a pet soother. It's hemp extract oil and Alaskan fish oil, and that's it," Atkinson said.

Finding some of those 50,000 uses for it matters more to him now as he works with other locals involved with the industry to turn his crop into a saleable product.

In the end, Atkinson paired with Lake Norman Extractions to turn his crop into products he could sell. Now, he finds himself more involved with the selling of individual products derived from hemp.

"We wouldn't have gone this way if it all had gone through, but maybe it will be better in the long run. Just hard on a first-year farmer," Atkinson said.

Learning on the fly

There's a learning curve even as Atkinson goes into his second year. He admits he is still learning a lot about the best ways to do things in each part of his business.

Some of it is as simple as how far apart to plant each row. He discovered having the plants six feet apart wasn't enough. After seeing how wide the plants could grow — nearly three feet in each direction — he quickly learned to space them out 10 feet.

"It's not me. I listen to people, I've done what they told me," Atkinson said. "I've got two ears and one mouth, so I try to listen twice as much as I talk."

He is hoping to do the same for other hemp farmers. He said after selling some of his products to Shannon Lyndon, who oversees Lyndon's Riverview Sports in Alexander County, he helped advise the store's owner in the same way once Lyndon expressed interest in farming hemp. He said he might end up cutting himself out as the middleman in the process if Lyndon sticks with it.

"He asked me why I was doing that, and I said, it's just the right thing to do,” Atkinson said.

Much like his own crop, he hopes he reaps what he sows.

Salvation Army marches on despite adversity

A twig dangles from insulation exposed by a tree that fell on The Salvation Army headquarters' roof last month. While the hole the tree create…

Home Instead’s Be a Santa to a Senior

Greg Atkinson inspects one of his hemp plants in September in Statesville.

Greg Atkinson inspects one of his hemp plants in September.

Greg Atkinson holds one of the "pre-rolls" of one of his hemp products.

Greg Atkinson poses beside one of his hemp plants in September in Statesville.

A display of hemp products is shown in Greg Atkinson's home.