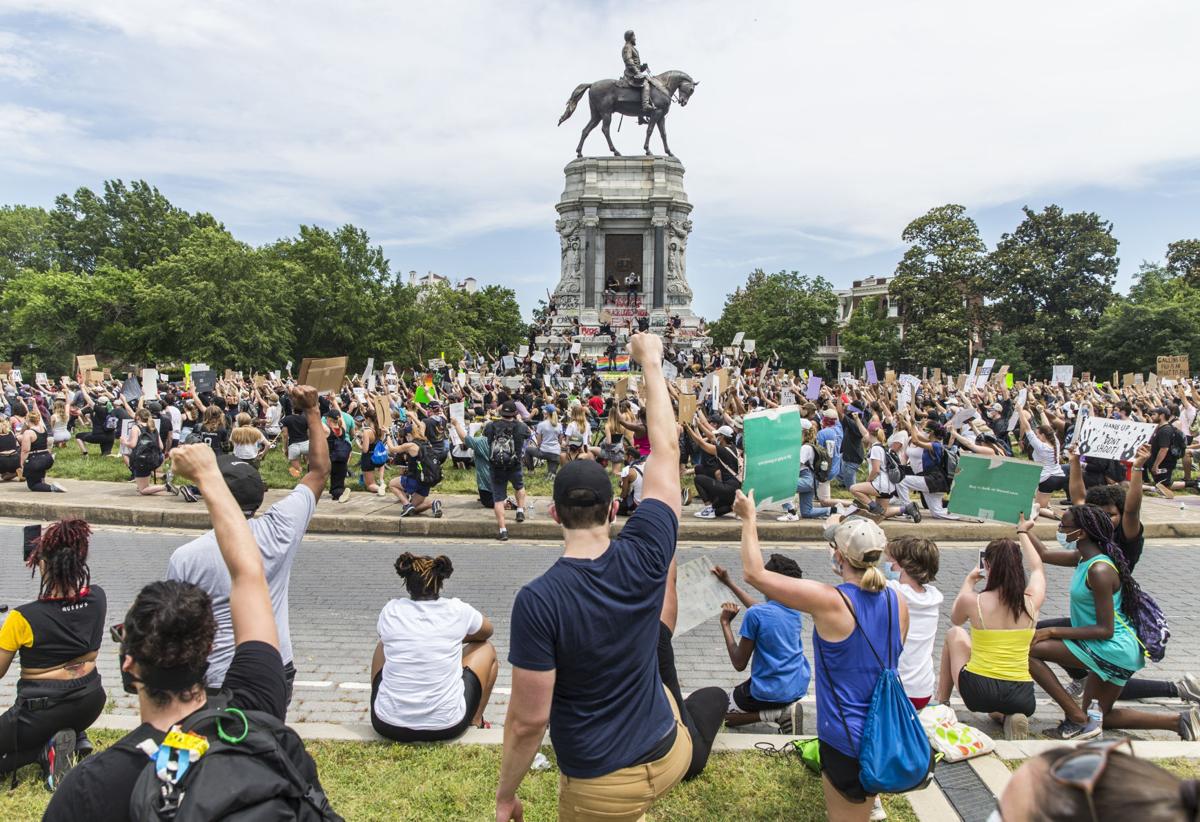 A sea of protesters gathered at the Robert E. Lee statue on Monument Avenue on June 3, 2020. 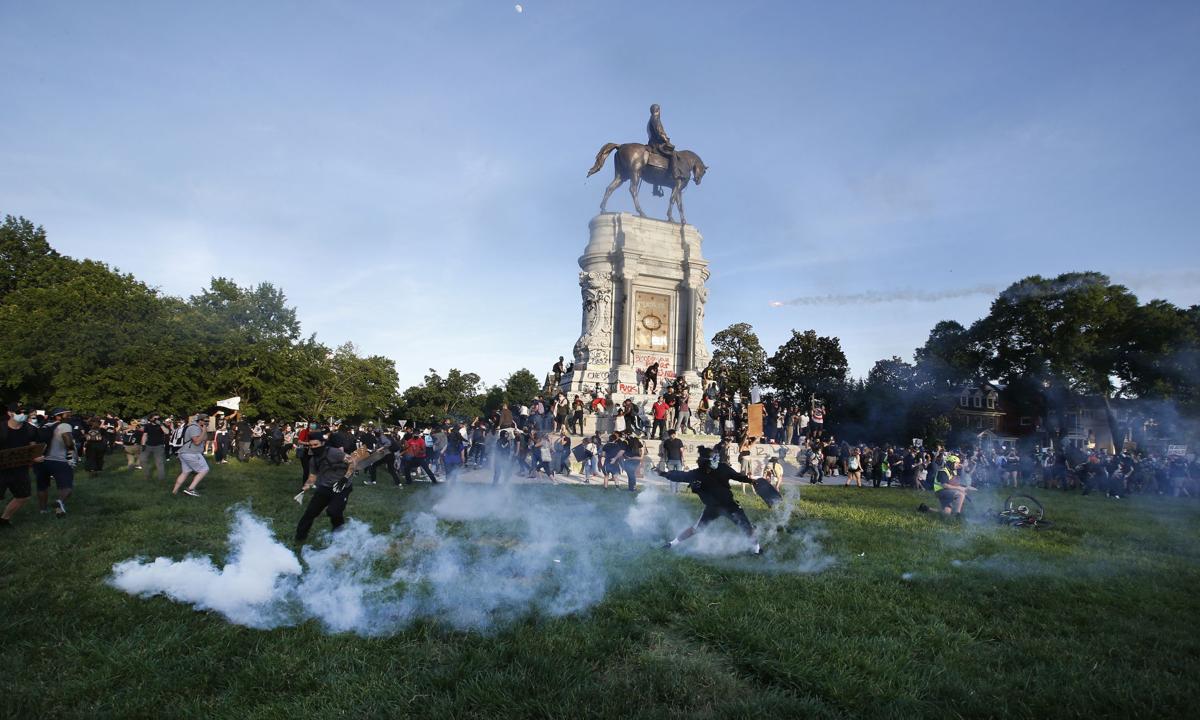 On June 1 last year, protesters at the Robert E. Lee statue on Monument Avenue threw canisters of tear gas back toward police, who had deployed it on demonstrators. Black Lives Matter had staged a protest rally and march through Richmond that day to protest police treatment of African Americans. 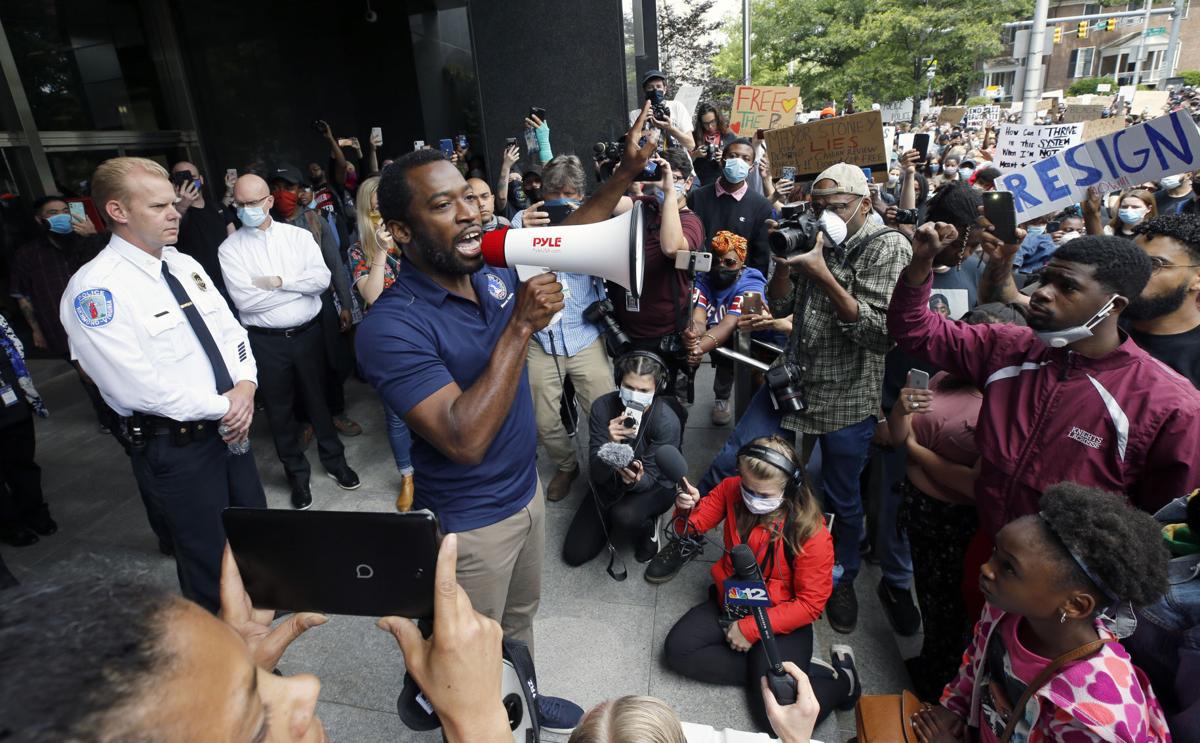 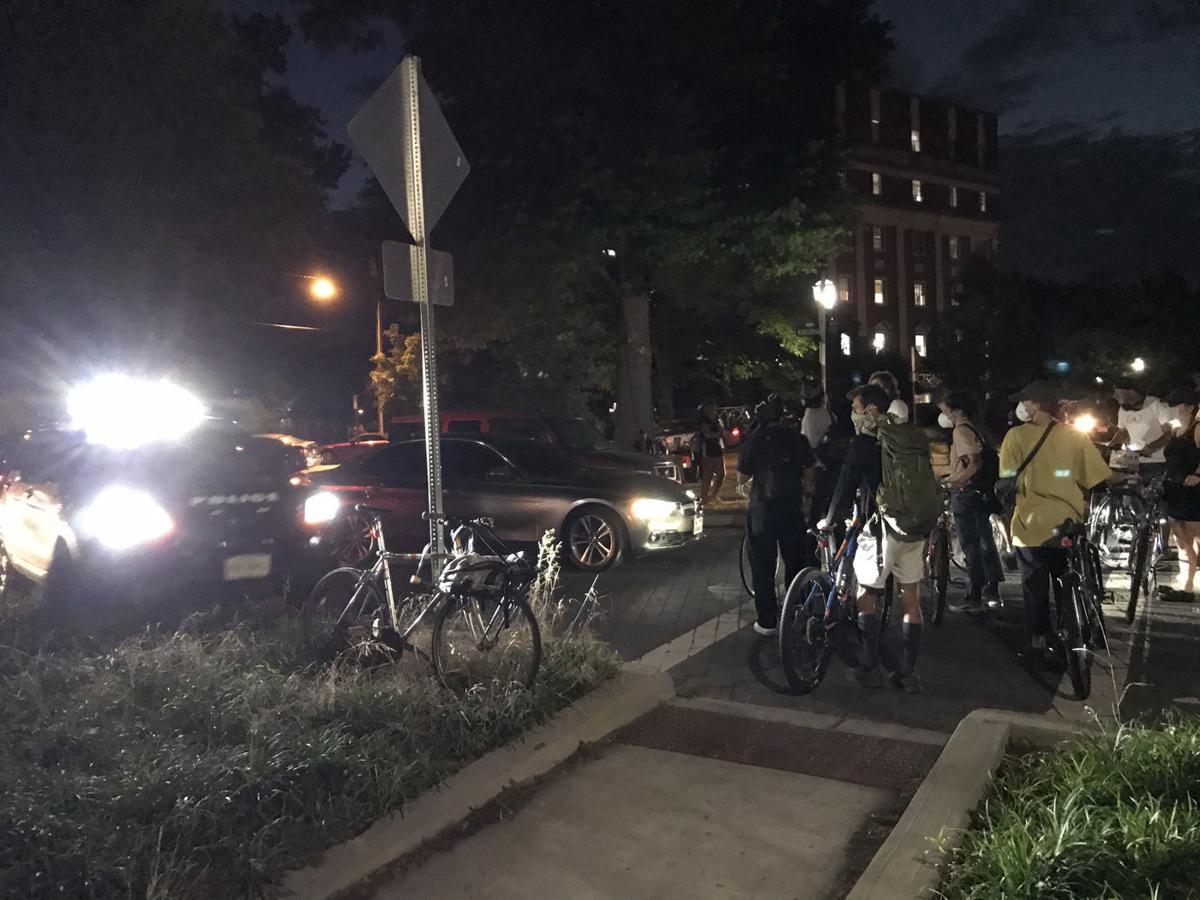 On Saturday night, a Richmond police officer drove an SUV over a curb and through protesters who were blocking the vehicle’s path near the Robert E. Lee statue on Monument Avenue. 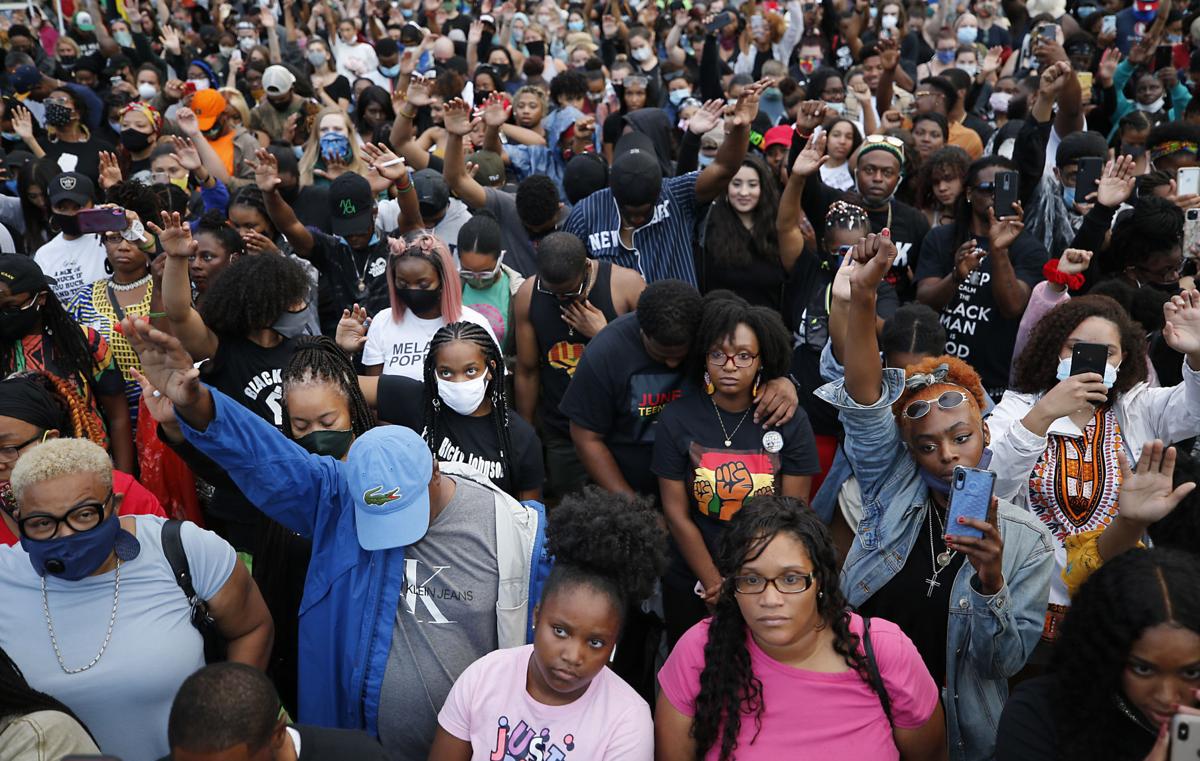 Demonstrators at the Lee statue raised their fists in solidarity during a candlelight vigil on Juneteenth. 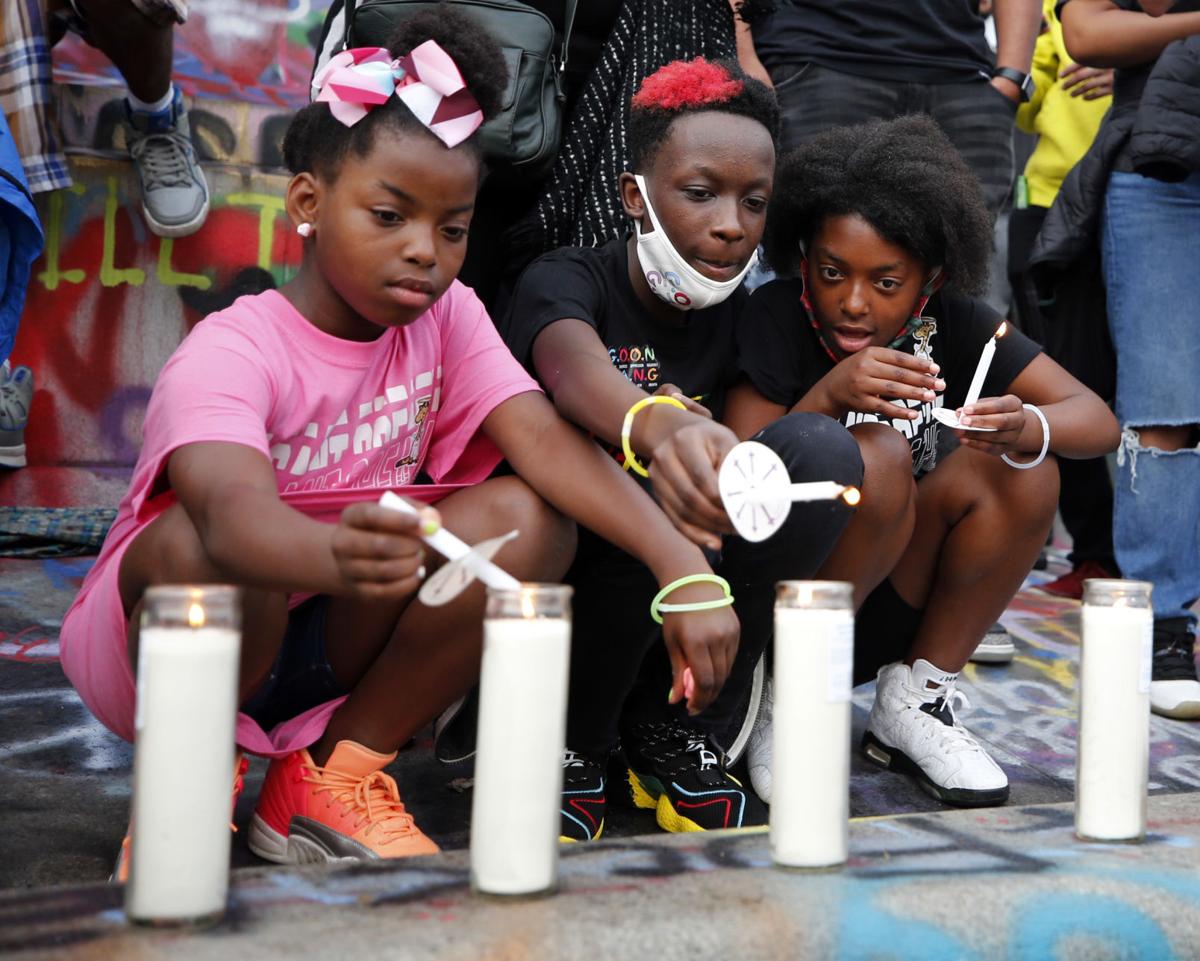 Children lit candles during a Juneteenth vigil at the Robert E. Lee monument in Richmond on Friday, June 19, 2020. 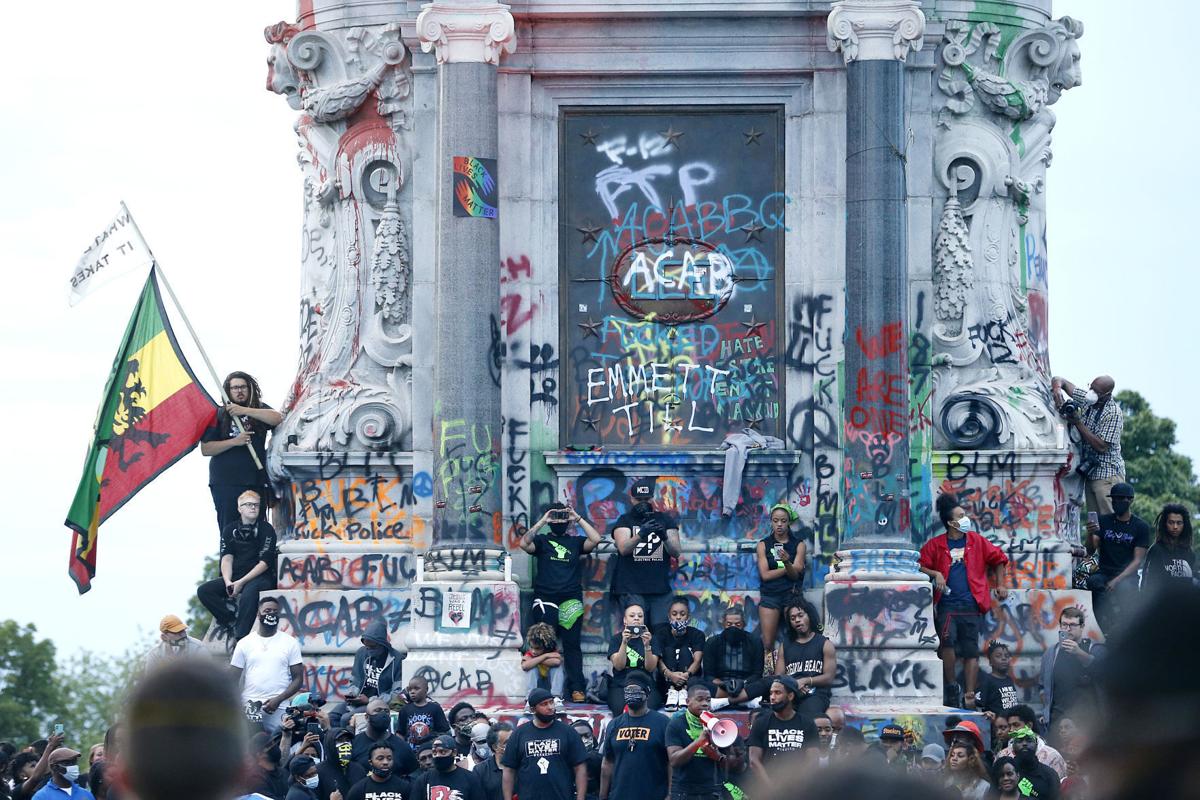 People gathered around the Lee monument on Friday to celebrate Juneteenth.

Here’s a brief look back on road to removal of Monument Avenue’s first — and largest — statue.

Jan. 8 — Del. Eileen Filler-Corn, D-Fairfax, is sworn in as Virginia’s first female speaker of the House after more than 400 years, saying it “ushers in a modern era.” Democrats gain control of the legislature and will usher in sweeping changes, from new gun restrictions to LGBTQ protections, expanded access to voting and more local control of Confederate monuments.

May 25 — George Floyd is killed in Minneapolis police custody, sparking protests in Richmond and around the nation against police brutality and racial injustice.

May 29-31 — The first night of what would become more than 90 consecutive days of protests in Richmond begins four days after Floyd’s killing by Minneapolis police. Over the weekend, hundreds of protesters are arrested after Richmond Mayor Levar Stoney enacts an 8 p.m. to 6 a.m. curfew. Multiple businesses and buildings are looted and/or burned, including the United Daughters of the Confederacy building on Monument Avenue.

June 1 — Richmond police use tear gas to clear a crowd of peaceful protesters at the Robert E. Lee monument nearly 20 minutes before the mandatory 8 p.m. curfew.

June 3 — It is learned that on the following day, Gov. Ralph Northam will announce plans to remove the statue of Lee from Monument Avenue. Stoney announces the planned removal of the four other Confederate statues there.

June 8 — Richmond Circuit Judge Bradley Cavedo issues a temporary injunction barring the state from taking down the Lee statue for 10 days as removal crews inspect the 130-year-old statue. Cavedo will later recuse himself from cases related to the statue because he lives in the Monument Avenue Historic District.

June 10 — The statue of Confederate President Jefferson Davis is pulled down by protesters shortly before 11 p.m., just a week after city leaders promised to remove all of the Lost Cause iconography along Monument Avenue. A crowd cheered and chanted as the bronze statue, which had stood since June 3, 1907, was hauled away on a flatbed truck.

June 18 — A Richmond judge extends indefinitely an injunction barring the state from removing the Lee statue. A lawsuit is filed by decedents of two signatories of an 1890 deed that transferred ownership of the land the statue resides on to the state on the grounds the state is to consider the monument and the area around it “perpetually sacred” and to “faithfully guard it and affectionately protect it.” Another hearing is set for July 23.

June 19 — Upward of 500 people gather at the Lee statue for a peaceful demonstration and celebration of Juneteenth, a holiday commemorating the emancipation of enslaved people in the United States.

June 26 — Blackwell, facing criticism about the department’s handling of the ongoing protests as well as his role in a 2002 fatal shooting in which he was cleared of wrongdoing, steps down as interim chief after just 11 days. Hours later, Stoney announces his handpicked selection in Gerald Smith, a deputy police chief in Charlotte, N.C.

July 1 — A year of historic change along Monument Avenue intensifies as the city takes down the statue of Confederate Gen. Thomas J. “Stonewall” Jackson under emergency authority cited by Stoney. It had stood at Monument and the Boulevard (now Arthur Ashe Boulevard) since 1919.

July 2 — Removal of the Matthew Fontaine Maury statue begins on Monument Avenue; it was unveiled in 1929 at the intersection with Belmont Avenue.

July 7 — The J.E.B. Stuart statue, located at Monument Avenue and Lombardy Street, is removed; it had stood there since 1907.

July 8 — The tall figure atop the Confederate Soldiers and Sailors monument at Libby Hill Park is removed. (It dated to 1894.) Crews also removed remaining elements from the Jefferson Davis memorial on Monument Avenue. As Confederate monuments come down in Richmond, an anonymous person files suit in Richmond seeking to block Mayor Levar Stoney from removing them.

July 9 — An amended lawsuit challenging Northam’s plans to take down the Lee statue — filed by a great-grandson of signatories of the 1890 deed that transferred ownership of the land for the statue over to the state — cites a section of Virginia code similar to what Northam used to justify his order, saying that “removal of all or part of the Lee Monument would be a violation” of that code section.

July 10 — The Virginia Department of Historic Resources unanimously approves plans for removing the Lee monument by cutting it into three sections. A review board recommends that the state consult with the National Register of Historic Places.

The same day, a new lawsuit is filed by two Monument Avenue residents, challenging the city’s authority to remove its Confederate statues and requests that those already taken down be put back up.

July 16 — Cavedo recuses himself. The reassignment order shows that Judge W. Reilly Marchant will now preside over the case. The recusal came the same day that six Monument Avenue residents who filed a separate lawsuit dropped their case in Richmond Circuit Court.

July 23 — Marchant extends the temporary injunction blocking the state’s removal plans for 30 days but emphasized that he plans to issue a ruling well before Aug. 23, possibly within a week.

Aug. 3 — The Richmond City Council votes unanimously to accept offers for the recently removed Confederate statues that are being held in storage. The same day, Marchant dismisses a complaint filed by a great-grandson of the signatories and in a separate case, issues a 90-day injunction that continues to block the Lee statue’s removal.

Aug. 25 — A ruling by Marchant allows four of the five counts in the Lee suit to proceed to trial Oct. 19.

Oct. 5 — Two Richmond police detectives are indicted on misdemeanor assault charges stemming from their actions on the tumultuous night of May 30-31, when fires were set by protesters and tear gas was fired outside police headquarters.

Oct. 16 — The New York Times Style Magazine names the Lee statue, in its current graffitied state with overlaying condemnations of police violence and white supremacy, the most influential work of protest art since World War II.

Oct. 27 — Marchant rules in favor of Northam’s order to take down the Lee statue, saying that arguments to keep it in place are contrary to current public policy. Plaintiffs appeal.

Jan. 25 — The state erects an 8-foot fence around the Lee monument as part of the Virginia Department of General Services’ plan to remove the statue. The fence is to remain as long as the statue does.

Jan. 28 — The fate of the Lee statue is now before the Virginia Supreme Court, where state Attorney General Mark Herring files papers asking the justices to turn down an appeal blocking its removal.

June 4 — The Virginia Supreme Court hears arguments in two cases aimed at barring the removal of the Lee monument, the last Confederate memorial remaining on Monument Avenue in the wake of Floyd’s death.

Sept. 2 — Richmond’s iconic but divisive Lee statue is coming down soon after the last obstacles to removal were cleared by two unanimous Virginia Supreme Court opinions.

Watch a livestream of the Lee statue in Richmond, Virginia being removed from its pedestal on Monument Avenue.

A sea of protesters gathered at the Robert E. Lee statue on Monument Avenue on June 3, 2020.

On June 1 last year, protesters at the Robert E. Lee statue on Monument Avenue threw canisters of tear gas back toward police, who had deployed it on demonstrators. Black Lives Matter had staged a protest rally and march through Richmond that day to protest police treatment of African Americans.

On Saturday night, a Richmond police officer drove an SUV over a curb and through protesters who were blocking the vehicle’s path near the Robert E. Lee statue on Monument Avenue.

Demonstrators at the Lee statue raised their fists in solidarity during a candlelight vigil on Juneteenth.

Children lit candles during a Juneteenth vigil at the Robert E. Lee monument in Richmond on Friday, June 19, 2020.

People gathered around the Lee monument on Friday to celebrate Juneteenth.