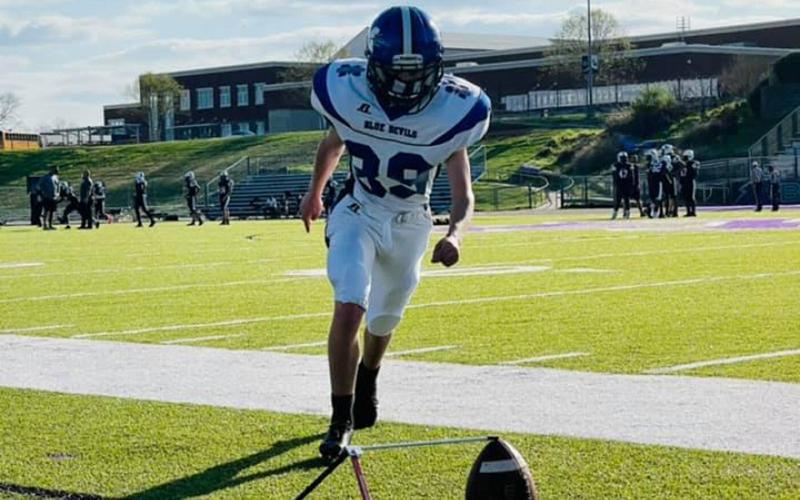 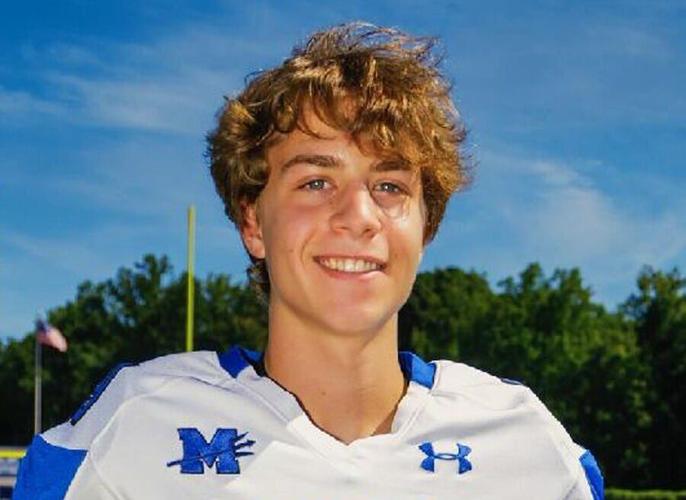 Mooresville kicker Jacob Monsour is doing his part to make a difference in the fight against that pediatric disease.

Monsour partnered with Alex’s Lemonade Stand Foundation for Childhood Cancer and is doing a “Kick for Cancer” campaign this season.

“I’m blessed this year to have the opportunity to use my kicking talent to help others in need, specifically children diagnosed and suffering with cancer,” the junior said. “A cancer diagnosis is upsetting at any age, but especially so when the patient is a child.”

According to the American Cancer Society, about 10,470 children in the United States under the age of 15 will be diagnosed with cancer in 2022. Childhood cancer rates have been rising slightly for the past few decades and about 1,190 children are expected to die from the disease each year.

Monsour is taking pledges for each point he scores for the Blue Devils. He is also accepting donations.

“We did a little math. That would be an average of six points per game,” Monsour said. “I believe I’m a good enough kicker. I think Coach (Joe Nixon) believes in my skill and our skill as a team.”

So far he has 21 points and about $1,500 raised. All the money goes to Alex’s Lemonade Stand Foundation for Childhood Cancer.

Former Mooresville kicker Isaac Riffle approached Monsour about potentially doing this fundraiser. Riffle kicked for the cause, too, while wearing the Blue Devils uniform.

“He means a lot to me,” said Monsour, a longtime soccer player who didn’t become a football kicker until eighth grade. “When he told me about it I was like, ‘Wow, I want to do that. I can use my kicking skills to help this cause.’”

He delayed the campaign until this season. As a sophomore, there weren’t many opportunities to split the uprights because he was behind kicker Matt Dean on the Blue Devils’ depth chart.

While it wasn’t cancer, Monsour went through his own medical adversity at an early age. He was born with Duodenal Atresia, which is a problem with the development of a baby’s duodenum, the part of the small intestine that connects the stomach to the rest of the intestine. Instead of an open tube into the intestine, a baby with duodenal atresia has a blockage or gap between the duodenum and intestine.

He was too young to remember that hardship. But he knows the story.

“I was very sick,” Monsour said. “I knew from my Mom’s perspective how horrible it was and how hard it was on her to see her child dealing with that.

“I can’t imagine what these parents go through when their child has cancer. I would love to help find a cure and treatments, and (the Kick for Cancer campaign) is a way I can try to help out.”

Monsour approaches it with a team-first mentality.

Football requires different strategies given situations on the field.

“I understand if we’re in field goal range but go for it on fourth down,” Monsour said. “I trust Coach with our team and wouldn’t be mad.”

He and the Blue Devils (3-1, 1-0) are fired up for Friday’s Greater Metro Conference showdown with Hickory Ridge (3-2, 1-0). The Ragin’ Bulls beat Mooresville 45-19 last season en route to the GMC championship. It was the Blue Devils’ only league loss.

“It’s the biggest game, next to Hough,” Monsour said. “I think we have a huge chance. If we win that one I think we’ll go undefeated in the conference.”

Want to help Jacob Monsour reach his goal of raising money with the Alex's Lemonade Stand Foundation for Childhood Cancer?

OLIN—St. Stephens ran its way to a 21-7 victory over North Iredell on Friday night as the Indians relied mostly on a rushing attack that chewe…

MOORESVILLE — In 2021, when Lake Norman met up with Kannapolis A.L. Brown, the entire game came down to the Wildcats facing a 4th and 1 at the…

Due to the possibility of inclement weather associated with Hurricane Ian on Friday evening, area high school football games this week have be…

Davie County punter to be recognized as All-American

Aaron Rodgers has his say on the NFL's greatest ever coach

Aaron Rodgers has his say on the NFL's greatest ever coach