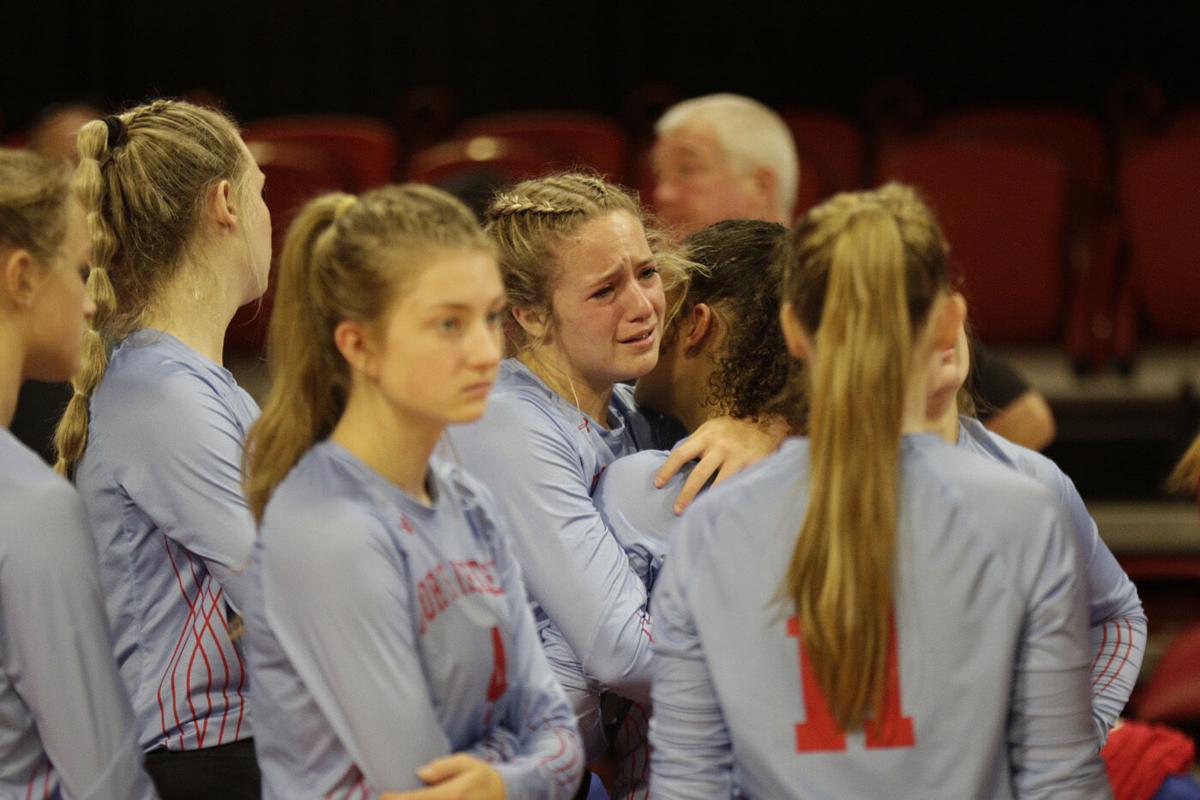 North Iredell’s Megyn Gaither hugs Ailena Mykins after Saturday’s loss in the 3A state final to Cedar Ridge as teammates look on. 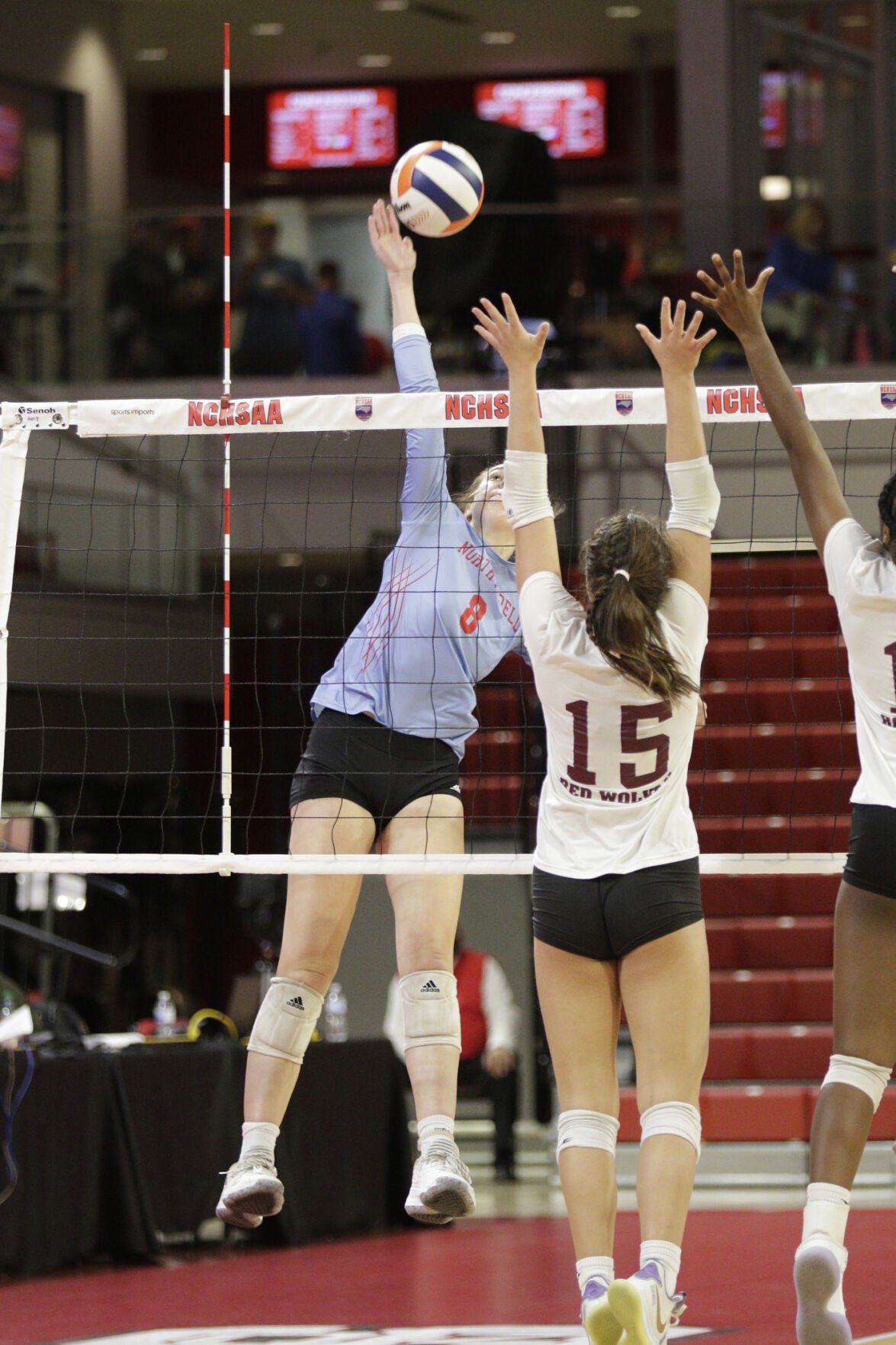 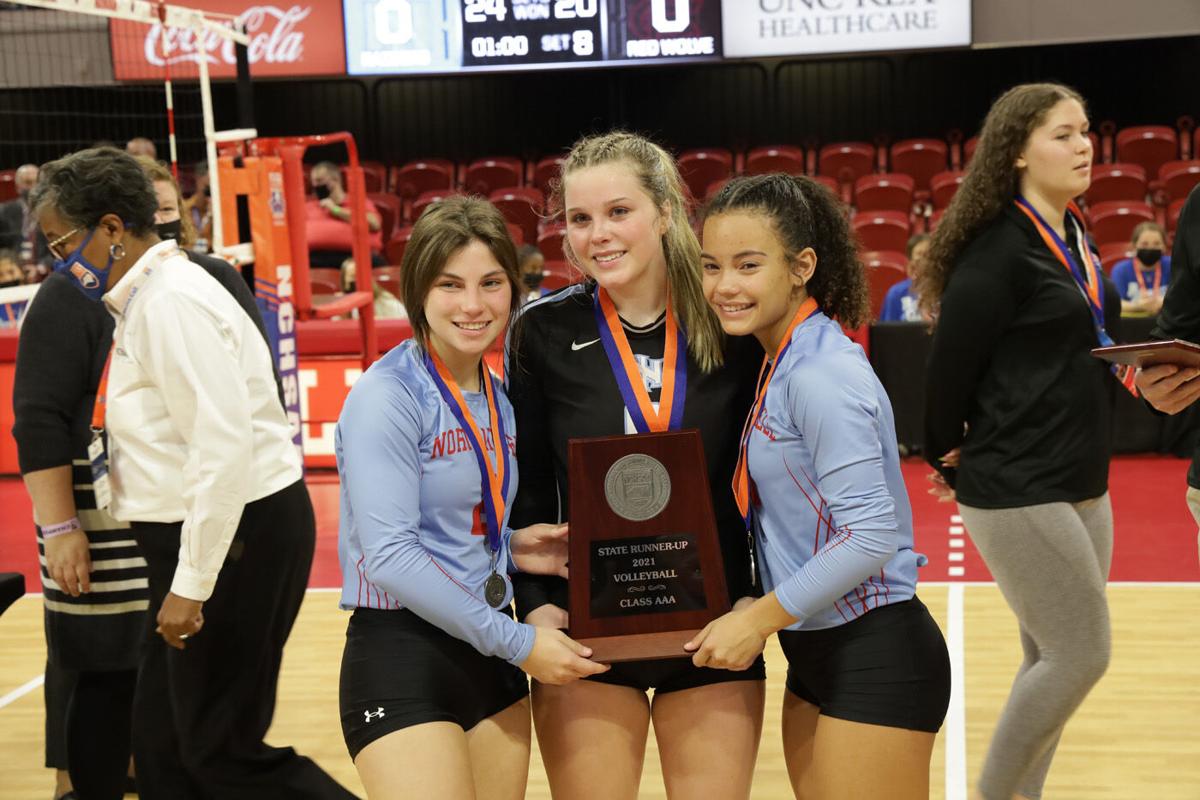 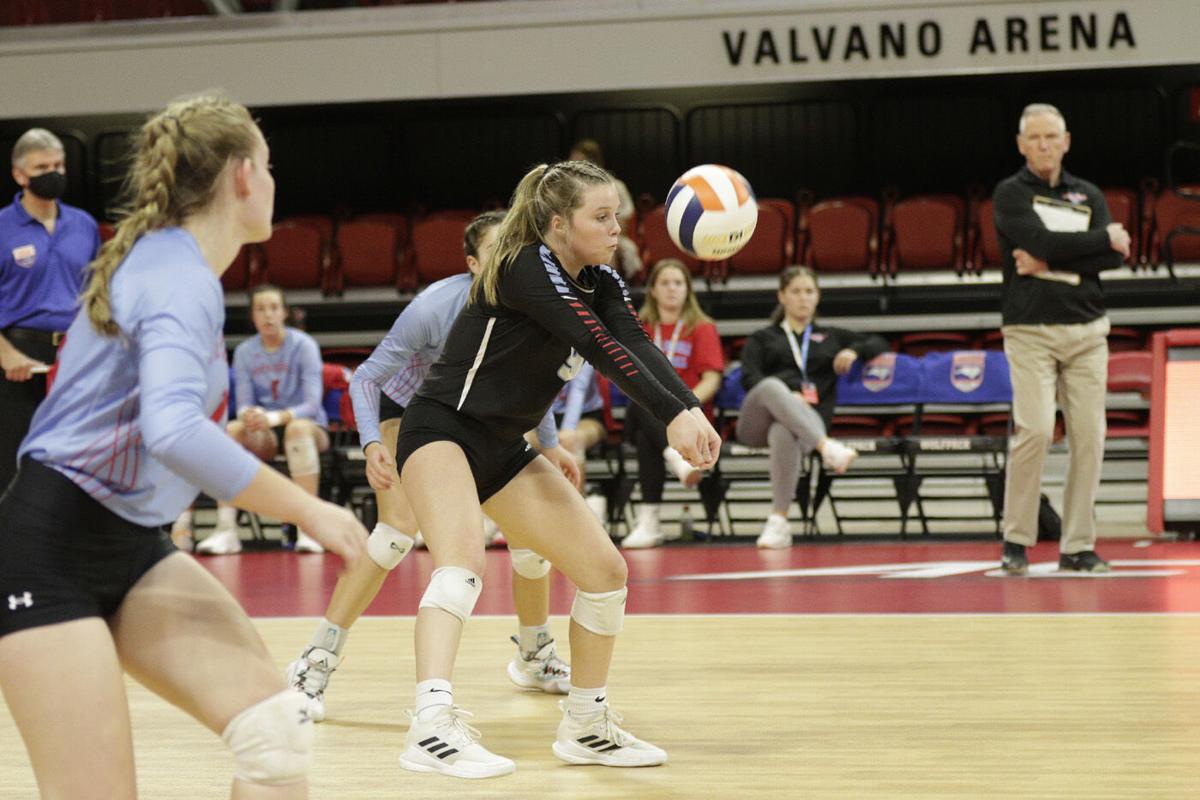 RALEIGH — North Iredell accepted the runner-up trophy at the conclusion of Saturday’s match.

It wasn’t the hardware the Raiders were looking to take home.

Cedar Ridge didn’t give them a choice.

“Still proud of y’all, Raiders,” a shout came from the North Iredell crowd after the Raiders stepped forward to be recognized as the second-place finisher in 3A.

“It was a great season, and I couldn’t be more proud of what they accomplished,” North Iredell coach Dave Markland said. “… I don’t think we ever got in our rhythm, and you have to give (Cedar Ridge) credit for that.”

Cameron Lloyd was named the game’s Most Valuable Player. The Cedar Ridge junior finished with a match-high 14 kills to complement her 12 digs.

North Iredell came up just short of its third 3A state championship while competing in its fifth state final. It looked promising in different spurts.

The Raiders opened the first set on a 5-0 run punctuated by Kayden Flowers’ block.

“We let them get too many runs,” North Iredell’s Tilley Collins said.

Cedar Ridge led 16-14 in the second set but a determined Raiders squad persevered to even the match. Madeline Sigmon recorded a couple of kills and Megyn Gaither made a sensational dig to keep a point alive during a 9-2 Raiders run that lifted them to a 23-18 advantage.

The Raiders were tantalizingly close to seizing a 2-1 lead in the match. After a 5-1 run got them back out front in the third set, back-to-back kills from Sigmon made it 22-20 in favor of North Iredell.

A service error derailed the momentum, though. The Red Wolves took advantage, closing it out with four more points. A mishit and miscommunication did the Raiders in on the last two Cedar Ridge scores.

“Of all my four years this has been the best,” said senior Breanna Gibson, who was recognized before the game as the Raiders’ recipient of the N.C. Farm Bureau Sportsmanship Award. She contributed a couple of digs and quality serves in the final game of her career.

To a player, the Raiders described this season as a family atmosphere. Success tagged along for the ride.

North Iredell won 26 of 28 matches, captured the Western Foothills Athletic Conference regular-season and tournament championships as well as the 3A Western Regional title.

Sure, the ultimate prize eluded them, but “it’s always going to be memorable,” Mykins said of the 2021 campaign.

The Raiders lose only one senior, Gibson. It’s not too soon to think about the possibilities in 2022.

“Now we’ve been here,” Norris said. “I feel like we can come back and we’ll know what to expect.”

WATCH NOW: A fan's view from Wake Forest section during the first quarter on Saturday night

MLB lockout: What you need to know

MLB lockout: What you need to know

One of the best seasons in Statesville Greyhound football history came to an end Friday night in the 3A state quarterfinals as No. 3 Dudley (1…

North Iredell’s Megyn Gaither hugs Ailena Mykins after Saturday’s loss in the 3A state final to Cedar Ridge as teammates look on.