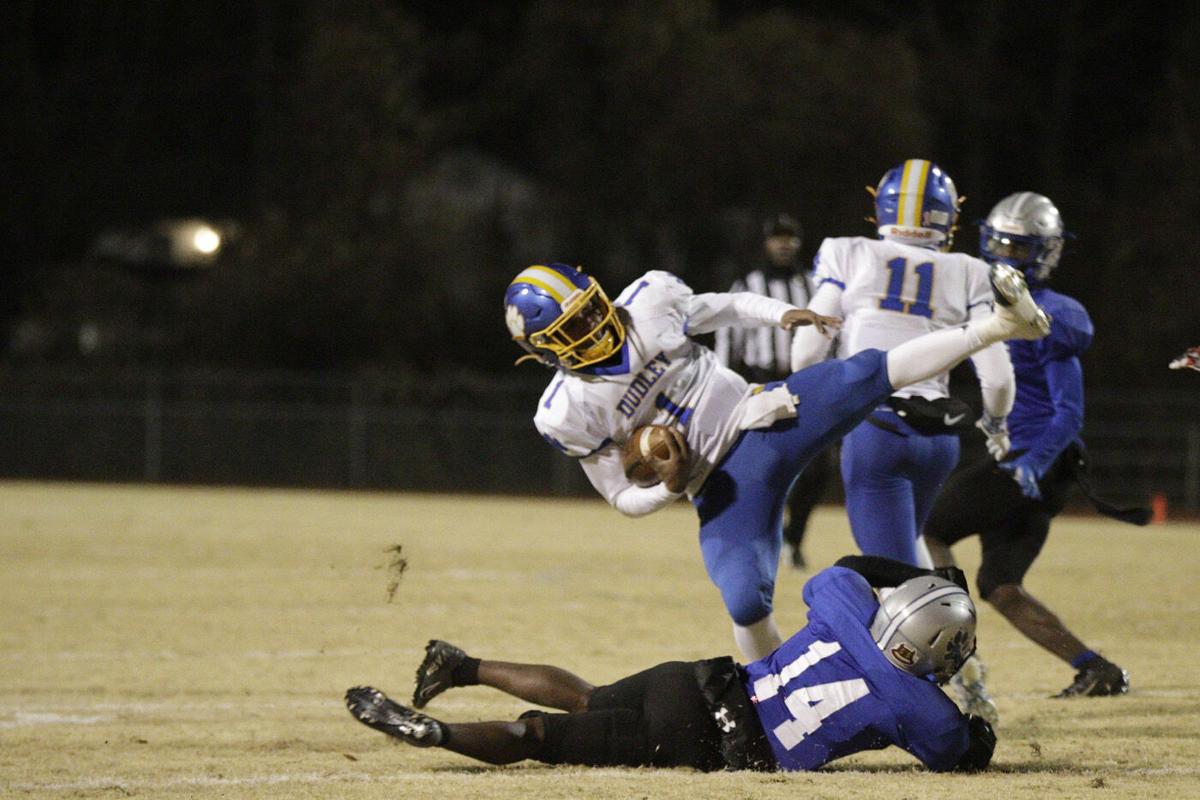 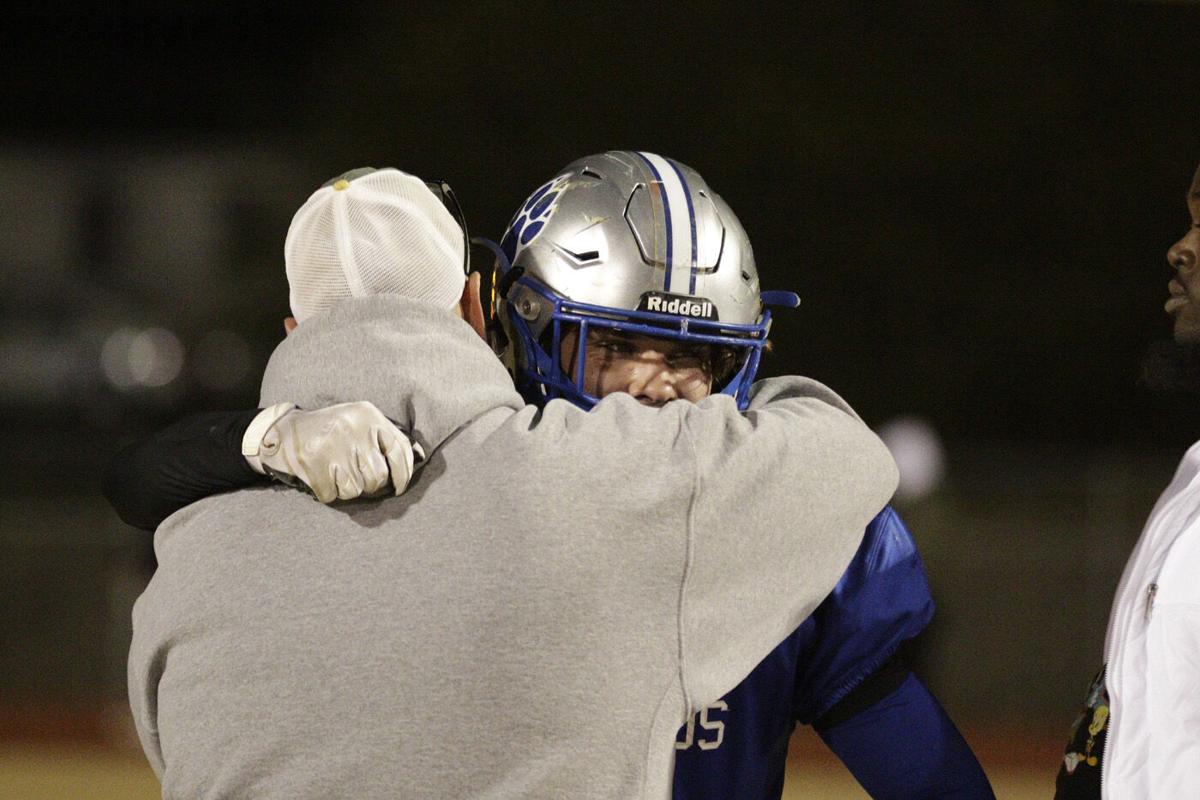 One of the best seasons in Statesville Greyhound football history came to an end Friday night in the 3A state quarterfinals as No. 3 Dudley (13-1) bested the second-seeded Greyhounds 20-6.

Statesville (12-1) ran through the first three rounds of the state playoffs virtually flawlessly outscoring its opponents 133-3 but came up against a stout Panthers defense that allowed just 82 total yards in the first half and forced three turnovers in the game.

“When you’re playing a good football team like that you can’t make mistakes,” Statesville head coach Randall Gusler said. “When you get this far you’re going to play great teams and they are a great football team.”

Statesville gained an extra possession early after Gabriel Lester recovered the muffed Panthers punt and gave the Greyhounds great field position. Statesville was forced to punt again and it took only two plays for Dudley to go 86 yards, capped by an 8-yard touchdown rush by junior R.J. Baker.

Two plays accounted for 153 of the Panthers’ 255 yards in the first half, both by senior quarterback Jahmier Slade. There was a 79-yard scramble to set up the Baker score and a 74-yard touchdown strike to K.J. Morehead early in the second quarter.

Slade went 8-for-14 and threw for 137 yards, two touchdowns and one interception by sophomore Mekiaun Davis. He added 153 yards rushing on the ground.

“We’ve relied on our defense all year,” Dudley head coach Steven Davis said. “We usually get turnovers and force teams to three and outs and we did a good job at that tonight.”

Statesville exited the locker room down 12-0 after the Panthers’ missed both point after tries in the first half. Dudley racked up 12 penalties for 90 yards in the first half to help keep the Greyhounds around heading into the second half.

Defense showed up for both teams in the third quarter as all three drives ended in no points for either team. However, the Panthers stretched their lead early in the fourth quarter with Slade finding Baker for an 18-yard connection to push the lead to 20-0 following the 2-point conversion.

It would be easy to mail it in down 20 points with only seven minutes left on the clock, but Statesville quarterback Zamari Stevenson was having none of that narrative. The Wake Forest commit went 4-for-4 on the next Greyhounds possession and the drive was finished off by JZ Harrison-Connor 4-yard touchdown to cut the lead to 20-6. Harrison-Connor rushed for 55 yards on 14 carries and added 11 catches for 56 yards in the game. Stevenson went 20-for-32 and threw for 168 yards and added 44 yards rushing on the ground.

Junior kicker Sam Buckner recovered his own onside kick and gave the ball back to the Statesville offense down 14 with just over five minutes left in the game.

After driving down inside the Panthers 15-yard line, the comeback was cut short with a fumble and the ensuing Dudley drive that took the game clock down to all zeros.

“Coming out of COVID our numbers were small this year and these kids came out and fought hard every week,” a choked up Gusler said after the game. “They just did a great job. It was unbelievable how they played together as a small group and how they took care of each other throughout this great season.”

Dudley moves on to the 3A Western Regional championship game to face No. 16 seed South Point for an opportunity to reach the 3A state final.

Mooresville-Lake Norman boys basketball down to the wire

Opinion: Sean Payton's last season with the Saints was a success

Opinion: Sean Payton's last season with the Saints was a success

OLIN—North Iredell’s Jackson Hawkins glanced over at the bleachers on the home side and noticed his older sister, Ashley, in attendance.

The Statesville Owls announced via social media that this summer season they will retire the numbers 16 and 21 previously worn by R.J. Conner …

MOORESVILLE—Armard Moore struggled to get the words out following Thursday night’s rivalry win over Lake Norman.

The local Fellowship of Christian Athletes (FCA) will hold “Courts for Christ,” a countywide youth rally, from 6-8 p.m. Feb. 7 inside the Sout…

There were a couple of notable county-vs.-county basketball games that were postponed the previous week due to weather that have since been re…

OLIN—North Iredell picked up a quality 22-point victory Tuesday night over St. Stephens but had to turn around and play 24 hours later.

ROUNDUP: Greyhounds’ comeback not enough in loss to East Lincoln

The West Iredell Soccer Association is preparing to hold a series of signups for interested players.

MOORESVILLE— With just under six minutes to play in the fourth quarter, South Iredell took a timeout to regroup. The scoreboard showed that th…