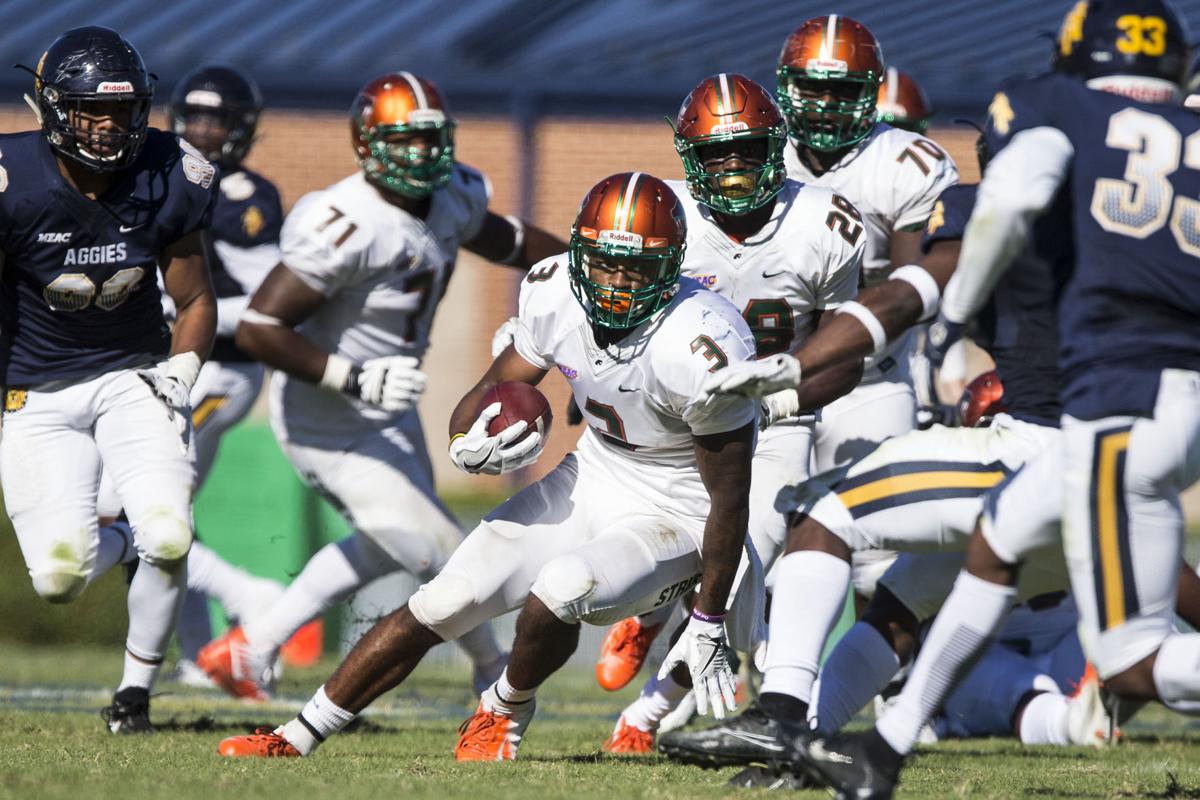 N.C. A&T defenders Sam Blue (left) and Jalon Bethea (right) chase Florida A&M running back Azende Rey during a game in Greensboro in 2018. Both the Aggies and Rattler plan to leave the MEAC after the 2020-21 school year. 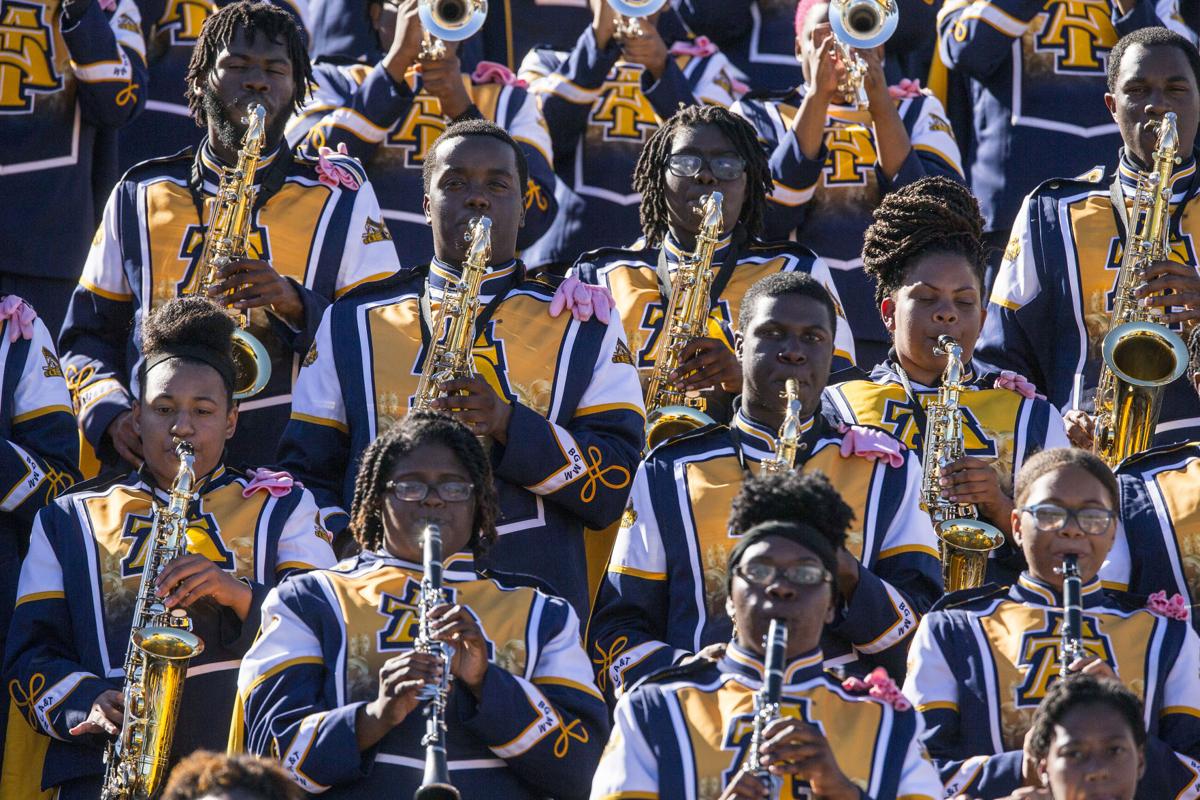 N.C. A&T's marching band plays during a game against Florida A&M in 2018. Both the Aggies and Rattlers, as well as Bethune-Cookman, have announced plans to leave the MEAC after the 2020-21 school year.

GREENSBORO — All of a sudden, the MEAC is a conference in crisis.

N.C. A&T’s announcement in February that it would leave the league after the upcoming 2020-21 school year and join the Big South is part of a troubling trend for the MEAC, which is losing members at an alarming rate.

MEAC leaders held a Zoom news conference this morning to ease fears that the league was on the verge of collapse and announce expansion efforts in a smaller geographic area around its remaining core members.

The MEAC has hired a consulting firm, Collegiate Sports Associates, to help search for new members.

“As far as timeline, we’re certainly moving with some urgency,” said Dr. Wayne Frederick, the president of Howard University. “We expect the first aspect (an internal audit) to be done by mid-July, and the second aspect in terms of adding institutions will be dependent upon what’s available.”

A&T, one of seven founding members of the MEAC back in 1970, followed Savannah State and Hampton in exiting the league in recent years. Winston-Salem State went through the Division I process to join the MEAC but didn't follow through and remained a CIAA member, Savannah State dropped to a less expensive NCAA Division II league, and the Pirates moved to the Big South.

In the past 20 days, the MEAC’s southern-most members, Florida A&M and Bethune-Cookman, announced their own plans to leave for the SWAC after this school year.

From a peak of 13 full-time member schools in 2017-18, the MEAC is down to eight full members, including just six that play FCS football. That’s barely enough for the league to keep its NCAA Division I automatic qualifier status in nine sponsored sports — D-I leagues must have a minimum of seven members, and FCS football leagues must have at least six teams.

“We cannot afford to lose another football-playing institution,” MEAC commissioner Dennis Thomas said, “simply because we would fall below the minimum requirement for (FCS) football. But if we did, we could still retain our Division I status for basketball.”

If the MEAC were to lose another football program, the clock would start ticking on the league’s viability.

“The NCAA will give you a two-year grace period to bring another member in to get you back whole for Division I status,” Thomas said. “It’s not like you’re cut off immediately.”

Bethune-Cookman’s decision Thursday to resign from the MEAC after 40 years and follow archrival Florida A&M to the SWAC creates an imbalance between the nation’s two leagues made up of Historically Black Colleges and Universities.

After next season, the SWAC would have 12 football teams to the MEAC’s six. For the last five years, those leagues’ champions have met in the lucrative Celebration Bowl in Atlanta.

A&T has won four of those bowl games, shown live on ABC. This is the final year of the current Celebration Bowl deal between the leagues and ESPN.

“We’ve been in contact with ESPN regarding the Celebration Bowl, and our champion will go,” Thomas said. “... Obviously, one league has 12, but only their best team will participate. And so will ours.

“… This is the last year of the contract. We’ve been in contact with ESPN and they want to renew. The Celebration Bowl has been a tremendous branding asset for us, a tremendous financial asset for us.”

Thomas said the MEAC would consider adding associate members for football only.

And a league that has always comprised only HBCUs would also consider adding Predominately White Institutions (PWIs).

“Our first obligation is to evaluate what makes a conference better,” Frederick said. “We also have to look at match, as well. What’s appropriate for our footprint? And does it match what we’re trying to do well?”

What the league does well, Frederick said, is stress academic success and research.

“The reality is we graduate 80 percent of our athletes at Howard,” Frederick said. “We talk a lot about where Black athletes go to play sports. But I’ll tell you, the athletes who come here, some are going to med school and law school after they leave us. Unfortunately, that doesn’t get as much press coverage as the 1 percent of athletes who make it to the pro game. That’s a bigger issue, a systemic issue that requires a change in the paradigm of how we think about what success is in athletics. I want the athletes who come into the MEAC to win, to be competitive, to be the best they can be. If they get a chance to play in the pros, I’m very supportive of that. But as educational institutions, we shouldn’t be seen as pass-throughs. We should celebrate the fact our graduation rates are something we should tout. … It should be a litmus test for success in the long term.”

Thomas said during his long tenure at the MEAC, the goal has always been to expand to at least 12 football-playing members to accommodate divisional play in the revenue-generating marquee sport.

And he has considered adding schools that are not HBCUs.

“We have been looking at PWIs for quite some times, in terms of compatibility with our conference,” Thomas said. “I can’t divulge those institutions, obviously, but we have talked with several PWIs within our footprint about possible membership. It just did not work out to our advantage. I’ve been commissioner 18 years now, and every year we observe the landscape, and PWIs have always been part of that process. … It’s not just recently we’re considering PWIs. We’ve always considered PWIs.”

As the MEAC struggles, Division II's CIAA is watching.

Clyde Doughty Jr., the Bowie State athletics director and president of the CIAA management council, said the conference would definitely look at expansion and at MEAC schools.

“It’s a very interesting situation and I think even before COVID-19 came and interrupted our lives I think folks needed to address some of the financial issues that they were dealing with in trying to stay afloat at the Division I level,” Doughty said. “I think everybody who is in Division I thinks there is a pot of gold where everybody is trying to stick their hands in it, but realistically you do it at the expense of your institution.”

Doughty said the COVID-19 has impacted revenues in a big way at smaller schools and at the major level of Division I.

“I look at these schools and the folks that are getting out of the conference in Hampton, N.C. A&T, Florida A&M and Bethune-Cookman left,” Doughty said. “So I think with the schools that are left, and timing is everything, so I hope the look at the CIAA being a good landing place for them and I think they would thrive and make our conference better.”

For now, with the recent loss of A&T and other high-profile schools, the MEAC’s first job is to keep what it has left.

“Certainly, once Hampton left, we were concerned about being poached,” Frederick said. “Several schools in the conference have been approached before, and that’s always a possibility. The schools that remain, I’m sure they’re going to be contacted (by outsiders). It’s our responsibility to make our case about this conference. … Tradition and legacy is a part of that. But like everything else in the HBCU world, we have to be realistic about the marketplace around college athletics.”

Kermit Smith can give a quick example of how important summer camps can be. And it’s from one of his first few days in Boone.

How universities in Greensboro and Winston-Salem and those with Football Bowl Subdivision programs in North Carolina stand regarding athletes returning to campus, whether athletes are required to sign waivers and whether the athletics departments will release data to the public about positive COVID-19 tests among athletes.

Ed Hardin: A&T introduces Will Jones as basketball coach as the university and athletics look forward together

GREENSBORO — Will Jones stood before journalists this morning in an idyllic setting outside Corbett Sports Center. People lounged in chairs and stood under trees and listened as he was formally introduced as head basketball coach at N.C. A&T.

John Swofford, the longest-tenured commissioner in the ACC's history, is an advocate for the league's home city.

Athletes returning: A&T athletes are not on campus for summer classes or workouts. Women’s basketball players returned Thursday, and men’s basketball and football players can return Sunday. Everyone else will return in August. Some track and field athletes live in Greensboro, and A&T will make provisions for them to begin conditioning.

Athletes returning: The football team is expected to report Aug. 4.

Athletes returning: App State had pockets of student-athletes return in clusters on June 15 and June 22. Another group will come to campus on Monday, and that's significant because it's the remaining football players and the start of the men's and women's basketball teams returning.

N.C. A&T defenders Sam Blue (left) and Jalon Bethea (right) chase Florida A&M running back Azende Rey during a game in Greensboro in 2018. Both the Aggies and Rattler plan to leave the MEAC after the 2020-21 school year.

N.C. A&T's marching band plays during a game against Florida A&M in 2018. Both the Aggies and Rattlers, as well as Bethune-Cookman, have announced plans to leave the MEAC after the 2020-21 school year.