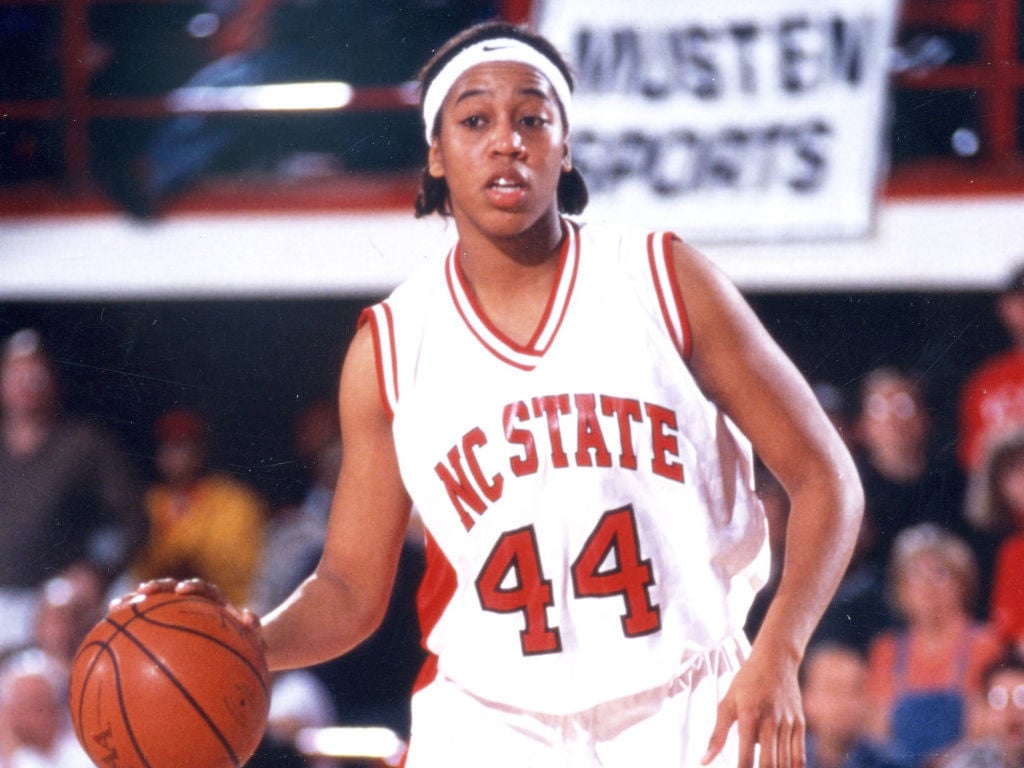 Chasity Melvin, who grew up in Roseboro, went on to an All-America college career at N.C. State, averaging 16.5 points and 8.2 rebounds in four years with Kay Yow's Wolfpack.

GREENSBORO — Joe Wolf, the new head coach of the Greensboro Swarm, has put together his staff of assistants to help navigate the 50-games-in-five-months journey through the NBA G-League season.

And yet it’s anything but typical, because one of the coaches happens to be a woman.

Chasity Melvin, who at 42 is already in the North Carolina Sports Hall of Fame, becomes the first female coach hired by the Charlotte Hornets, the Swarm’s parent club. She joins a short list of women who have coached men’s pro teams, a list that includes Becky Hammon, Nancy Lieberman and Jenny Bouchek.

“I’m super excited,” Melvin said, “and that probably doesn’t begin to describe my feelings. … My transition after retiring as a player, I thought it would be much easier to get into coaching. I coached high school for two years, and I was trying to get into college coaching. I didn’t have NBA coaching on my radar. So to have this opportunity, and for my journey to start at home in North Carolina with Coach Wolf and the Swarm and the (Michael) Jordan family, it’s such a great opportunity.”

Melvin grew up in Roseboro, a rural town of 1,191 east of Fayetteville, and went on to an All-America college career at N.C. State. A 6-foot-3 center, she averaged 16.5 points and 8.2 rebounds in four years playing for Kay Yow, and she led the Wolfpack to the 1998 Final Four.

The 11th overall pick in the 1999 WNBA draft, Melvin played 12 seasons for Cleveland, Washington and Chicago, as well as off-seasons in Europe and Asia.

“Chasity Melvin is a great addition for us,” Wolf said. “She brings experience from on and off the court. She was an All-Star in the WNBA, a player who has played in the United States and overseas. She knows what players go through. … She has played in huge games. She understands the pressure that comes with playing professionally, the stress, the length of the season. For me, as a former player myself, it’s exciting to get another perspective, another voice.”

But Melvin’s big break came when she was accepted into the NBA Assistant Coaches Program, which has helped former pro players such as Jerry Stackhouse, Vin Baker and James Posey transition to coaching.

“I was one of two women in the program last year along with 30-plus NBA guys,” Melvin said. “So I went in and started working with these NBA guys, and I quickly realized that basketball is basketball, and I played pro ball, too. … I understood really quickly, ‘Oh, I can do this.’”

The program goes beyond Xs and Os. There’s course work throughout the year, learning computer hardware and software. There’s hands-on experience learning how to scout, how to use video, how to teach specific plays.

“It’s a fascinating program, and it’s something I wish had been around when I was getting into coaching,” Wolf said. “It’s for former NBA, WNBA and G-League players, and they learn a lot. … They do their due diligence and work on their skills every week. If they do well, then they have an opportunity to do what Chasity did, interview for a job at the G-League level. She was great in her interview, and … this was the next logical step.”

So now Melvin is part of a G-League coaching staff, a diverse group with different coaching backgrounds.

Dan Tacheny speaks two languages, has international and scouting experience among 14 years of coaching, most recently as the top assistant with the G-League’s Delaware franchise.

Dave Kenah spent the last two G-League seasons with Santa Cruz and Agua Caliente. Evan Harville graduated from Westminster College in 2014 and was on staff at Wingate last year.

And then there’s Melvin, the N.C. Hall of Famer and retired All-Star.

“I don’t think of it as coaching men; I’m coaching basketball players,” Melvin said. “Now, it does really ignite my competitive drive, that fire inside that all pro athletes are still looking for after they retire. Because coaching men, the game is faster and a little more challenging. I have to be quicker on my feet, quicker to adapt.”

The Swarm opens training camp Tuesday. The team, now in its third season, plays its opener Nov. 2 at the Wisconsin Herd. The home opener at the Fieldhouse is 7 p.m. Nov. 10 against the Grand Rapids Drive.

“I’m excited by the well-rounded coaching staff that Joe has assembled with the Swarm,” Hornets assistant GM Buzz Peterson said. “As with the Hornets, Joe has placed a value on player development and hiring coaches who can help maximize our players’ skills and talents. We are looking forward to getting the team on the court for the start of training camp.”

Jones had been the head coach at Radford since the 2011-12 season, the same year that Miller became UNCG's head coach.

The Mountaineer was selected in the fifth round.

The former Demon Deacons star played from 2002 to '06 in Winston-Salem.

The Mountaineers will open the 2021 season against East Carolina on Sept. 2.

Omaha will advance to a second-round game against Stanford on Sunday.

Two women's games at Bryan Park on Tuesday will open the tournament.

Scott Fowler: Roy Williams laughs off another bogey. This is retirement, and he’s loving it.

This is what retirement looked like for former North Carolina basketball coach Roy Williams on Wednesday:

Chasity Melvin, who grew up in Roseboro, went on to an All-America college career at N.C. State, averaging 16.5 points and 8.2 rebounds in four years with Kay Yow's Wolfpack. Chasity Melvin, a former N.C. State and WNBA star, was inducted into the N.C. Sports Hall of Fame in 2017.