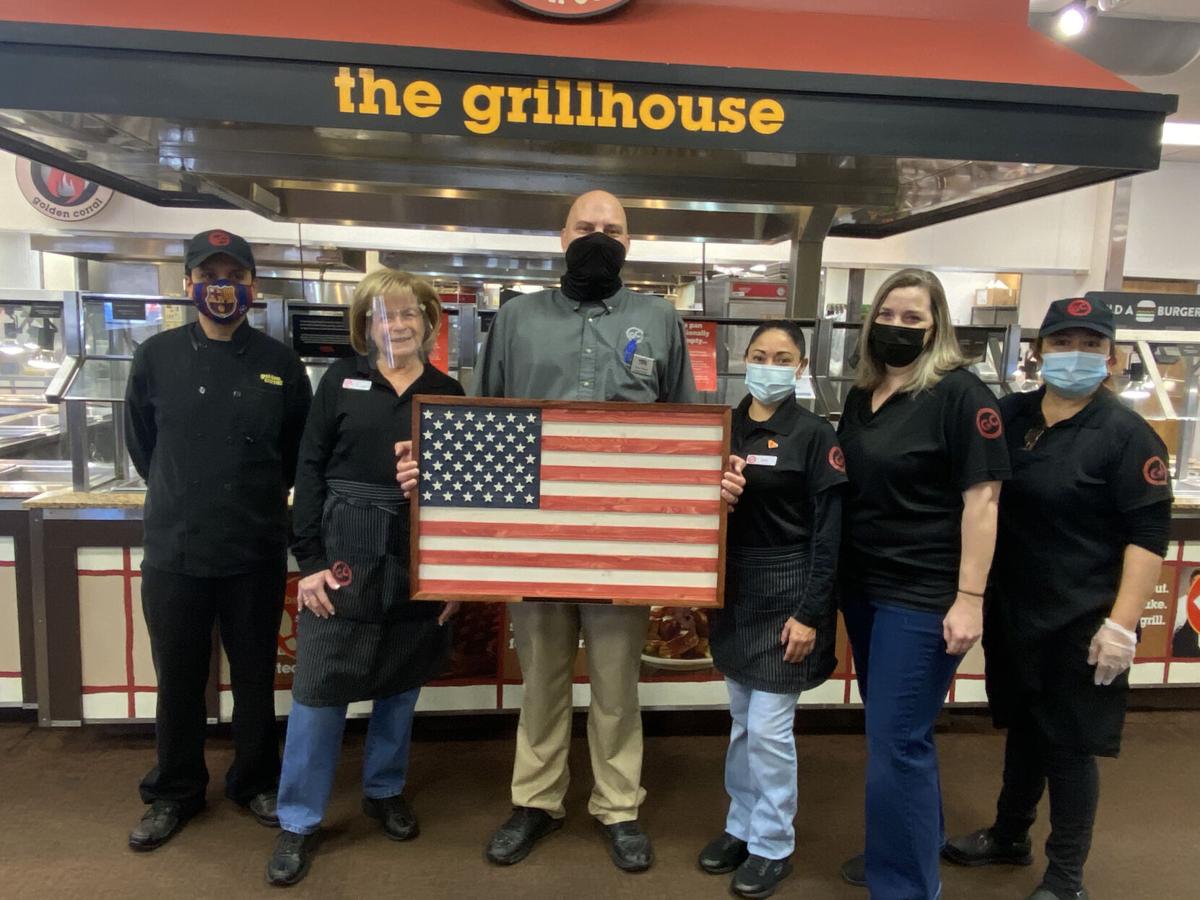 Golden Corral staff is presented with a gift from DAV. 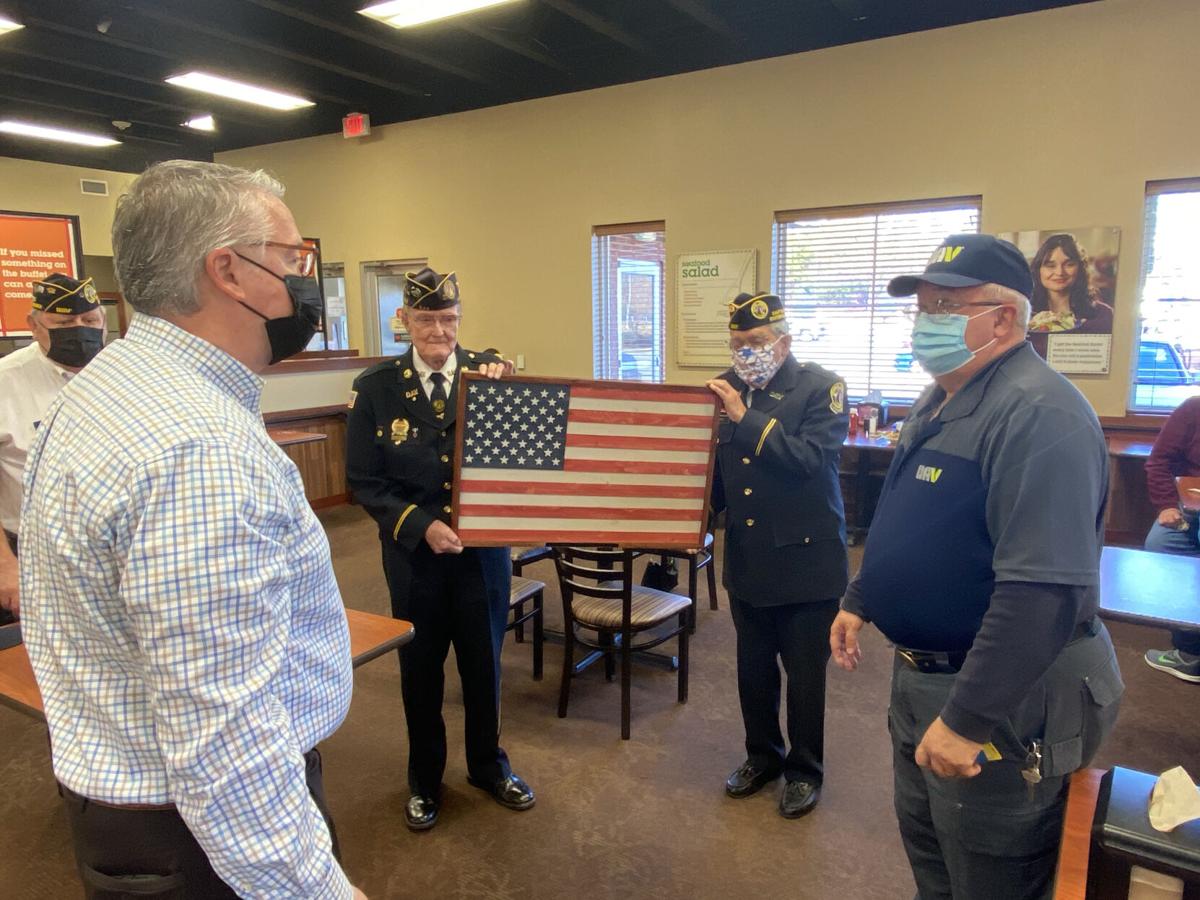 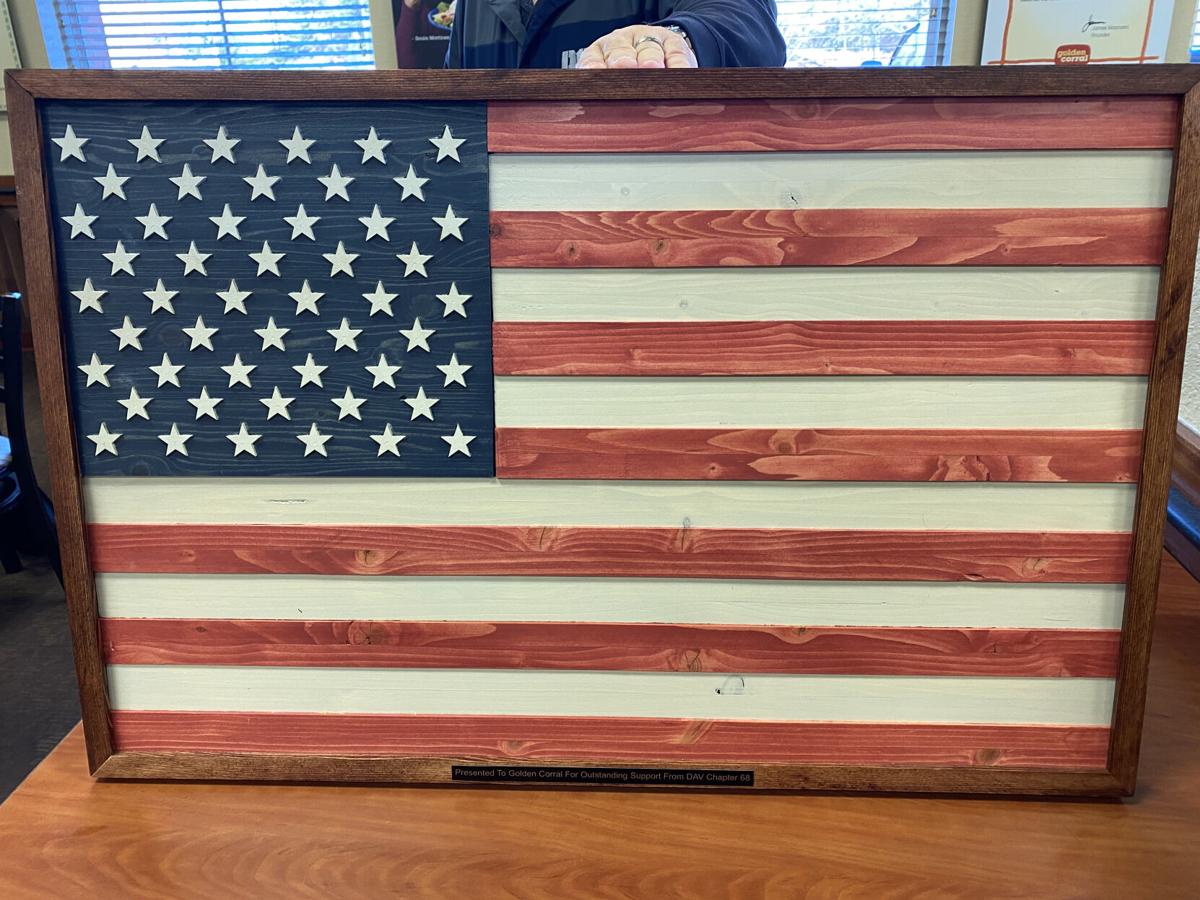 The wooden American flag made by Chris Vidal was presented to the Golden Corral staff.

For 30 days in November, members of the Statesville Chapter of the Disabled American Veterans were given the opportunity to set up a table in the Golden Corral in Mooresville to collect donations. The members of the 68th chapter of the DAV worked the donation table in four-hour shifts for the entire month and ultimately received more than $3,300 in donations.

“Because of COVID, and because of the generosity of the owner here, we were allowed to be here all month,” Ken Marsh, commander of DAV Chapter 68, said. “It was phenomenal that Golden Corral let us take up table space for 30 days when they were already limited.”

Members of the DAV met at the Golden Corral in Mooresville on Wednesday morning to present a wooden American flag made by local woodworker Chris Vidal.

“We wanted to give this to the staff here to show our appreciation,” Marsh said. “Because the money we raised here is critical.”

The proceeds from the fundraising event back in November were given by the DAV to the Iredell County Veterans Council so that it could be properly distributed to veterans in need of financial assistance.

Marsh, who is also chairman of the Iredell Veterans Council, stated that 100% of the donations will stay in the area to help local veterans.

Nationwide, Golden Corral has been providing veterans with an opportunity to not only eat free on Veteran’s Day, but a chance to collect donations in the restaurant for a couple of weeks in November. With the pandemic this year, the veterans were instead given a free meal card and a longer period of time to collect donations due to the decreased traffic in the restaurant.

Marsh worked 28 of the 30 days at the table, giving out candy and toy soldiers to children and watching as people were locked into war movies he was showing on a small TV.

“Golden Corral is phenomenal,” Marsh said. “We’re very glad we were able to do this.”

Yadkin sheriff: Man shot his wife and his in-laws before shooting himself. 82-year-old father-in-law is lone survivor.

A Yadkin County man shot his wife's parents, then his wife and finally himself on Sunday, leaving only the father-in-law alive, according to a news release from the Yadkin County Sheriff's Office.

President Joe Biden has signed a series of executive orders from the Oval Office hours after his inauguration. He said there was “no time to start like today.”

Biden: US Economy is in 'a national emergency'

Golden Corral staff is presented with a gift from DAV.

The wooden American flag made by Chris Vidal was presented to the Golden Corral staff.