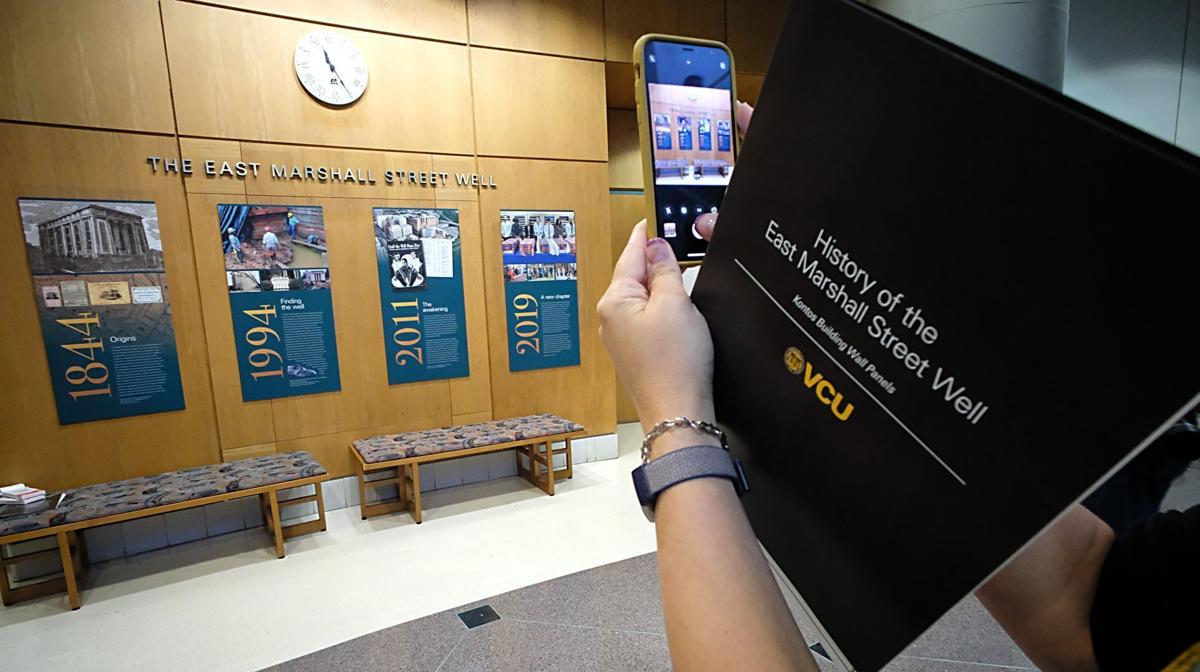 A young woman takes a photo of  four wall panels that were dedicated as the East Marshall Street Well Project during a ceremony at the VCU Medical Center in Richmond, Virginia on Friday, Sept. 24. The panels tell the story of 19th century human remains discovered in an abandoned well on the MCV campus in 1944 during construction of a medical sciences building. The remains, believed to be of African descent, are now in the Virginia Department of Historic Resources. 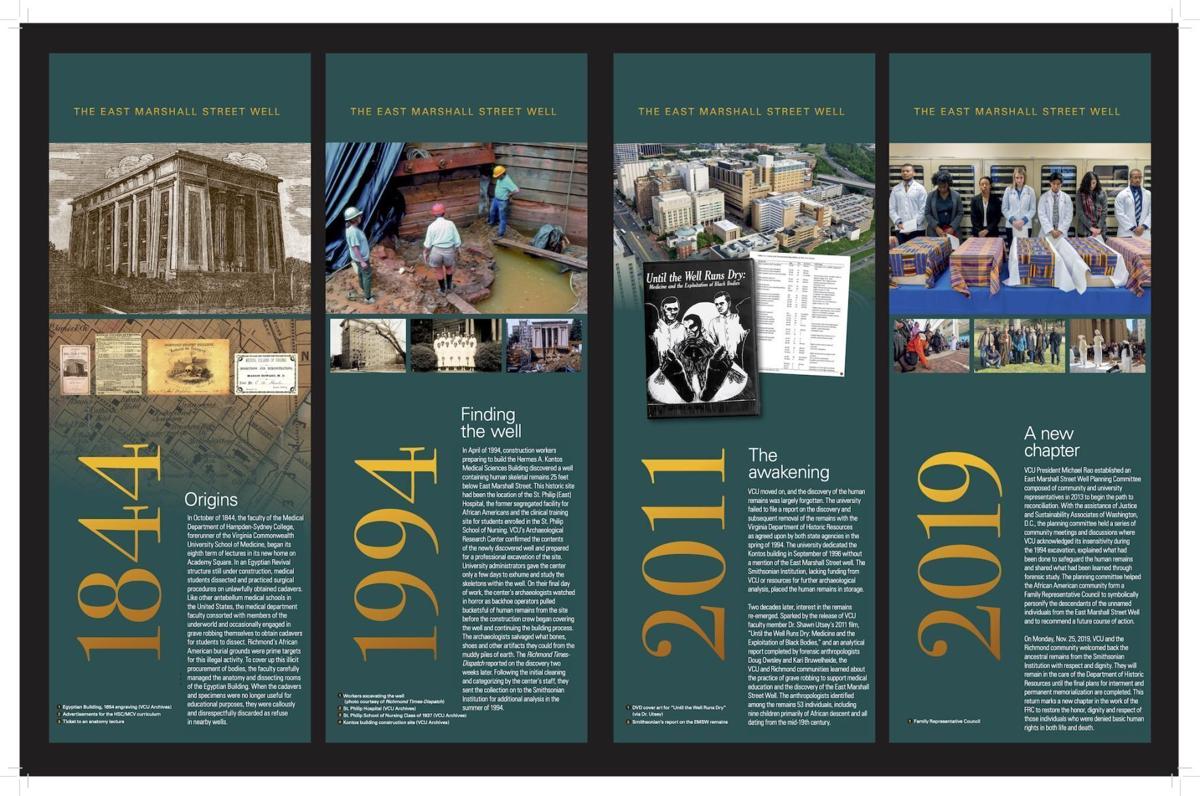 VCU unveiled these panels last week in the Hermes A. Kontos Medical Science Building. They tell the story of how medical faculty stole Black bodies from cemeteries, dissected them with students and discarded them in nearby wells. 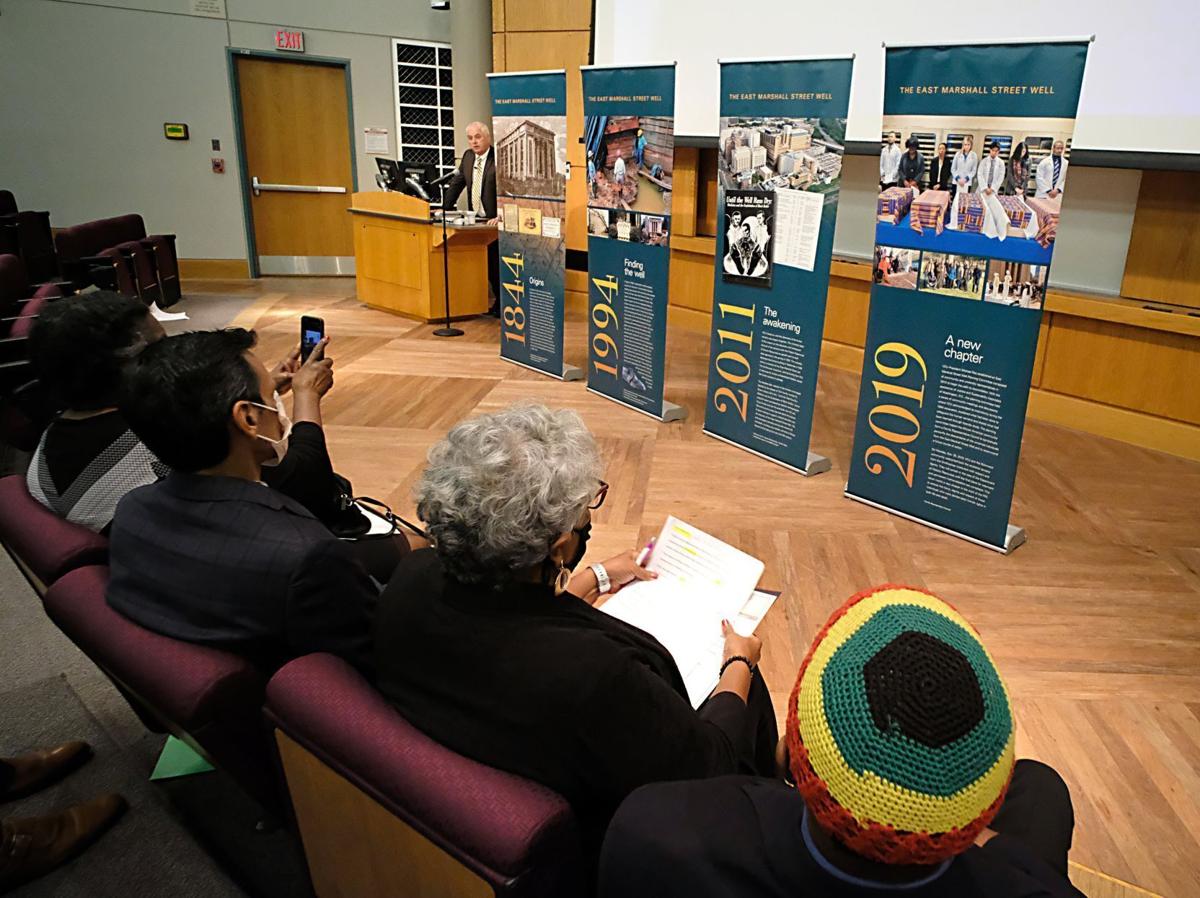 In 1994, construction workers in downtown Richmond, Virginia found the remains of 53 people, including nine children, strewn at the bottom of a well. The bodies were largely of African descent, and they were determined to be from the late 1700s to about 1850.

Now, four museum-like panels at a Virginia Commonwealth University Health System building will tell the story of the remains, which were likely stolen from graves for medical school dissection and cast away after use.

Universities in the South have grappled with how to address the remains of Black individuals found on their campuses in recent years. The University of Richmond has worked to better address a “burying ground” rediscovered on campus.

The four panels at VCU, unveiled last week at the Hermes A. Kontos Medical Sciences Building, tell the story of a “group of people whose identities have been lost to a problematic and difficult history,” said Peter Buckley, dean of the VCU School of Medicine.

In 1844, the medical school for Hampden-Sydney College, a forerunner of the VCU School of Medicine, relocated to the Egyptian Building in downtown Richmond. To teach medical procedures, faculty stole bodies from African American burial grounds. Students would dissect and practice surgical procedures on them, and when the remains were of no further use, they were cast into nearby wells.

Workers discovered the human remains in 1994 during construction of the Kontos Medical Sciences Building. The skeletal remains were 25 feet below East Marshall Street, where a segregated hospital for African Americans used to exist.

According to a Richmond Times-Dispatch story at the time, the brick well was “full of water and topped by clay,” preserving the body parts. Other artifacts found in the well included a dozen shoes, chunks of imported dinner plates, a green wine bottle with a concave bottom, a pipette, and hand-blown test tubes and beakers.

Archaeologists weren’t given much time to examine the site. One of the new panels says that on the final day of work, the archaeologists “watched in horror as backhoe operators pulled bucketsful of human remains from the site before the construction crew began covering the well and continuing the building process.”

And not all the human remains were excavated, according to The Times-Dispatch. Six days after the first discovery, explorers found a smaller well at the bottom of the first one. Instead of removing the human parts, they covered the well with cement.

“It would’ve meant putting on scuba gear and going down a well full of dead bodies,” L. Daniel Mouer, the founder of VCU’s Archaeological Research Center, told The Times-Dispatch in 1994. “We’ll leave that for archaeologists in two or three hundred years.”

VCU largely forgot about the remains. The university never filed a report with the Virginia Department of Historic Resources, as it agreed to, and dedicated the building without mentioning the well.

A change of attitude came in 2011, when Shawn Utsey produced a film about 19th-century medical schools robbing Black graves. Two years later, VCU President Michael Rao established a planning committee to address the remains, and a group of African American residents formed the Family Representative Council to symbolically represent the descendants of the people found in the well.

The remains, which had been sent to the Smithsonian Institution, returned to Richmond in 2019 and are housed at the Virginia Department of Historic Resources. One of the new panels says that bringing the remains home was meant to “restore the honor, dignity and respect of those individuals who were denied basic human rights in both life and death.”

The Family Representative Council is continuing to work on a permanent memorial, but unveiling the panels is an “important step toward reclaiming the full humanity of our ancestors — those unearthed 27 years ago, as well as those likely still buried beneath the Kontos Building,” said Carmen Foster, who spoke on behalf of the council at the unveiling of the panels Friday.

“The bodies of these children, women and men were taken, not given, for the development of medical knowledge,” Foster said. “From this day forward, every person who enters the Kontos Building will know that this is sacred ground.”

One customer described a fight involving the employee and another man around 7 p.m. Monday.

Nathan Tabor, former Congressional candidate and one-time chair of the Forsyth County Republican Party, is facing numerous criminal charges, ranging from stealing catalytic converters to making harassing and threating comments to his mother-in-law and other family members and his pastor.

"The police department cannot speak on the motive for this homicide, as the investigation is ongoing, but investigators do not believe this to be a random act nor are any further suspects being sought," authorities announced in a Monday evening news release.

N.C.'s lieutenant governor now seems to say his controversial comments were in reference to sexually explicit material he alleges “is currently in North Carolina schools." No mention was made of those books in previous complaints he lodged against public schools in North Carolina.

Stephen Roszel was preparing for his “dream job” teaching Advanced Placement government and social studies at Monacan High School this year when the Chesterfield School Board adopted a mask mandate, a move recommended by the federal Centers for Disease Control and Prevention, then required by the state.

10-year-old Virginia girl who died of COVID had been assigned to walk sick students to school nurse's office, mom says

A Suffolk child who died of COVID served as class "nurse," her mother wrote, walking all the sick children to the clinic.

NC man dies in standoff with police in Winston-Salem

A man was in the house that police had surrounded on Main Street in between Garland and Avondale streets, according to WGHP/Fox 8 News, the Journal’s news gathering partner.

October rolls around and we all start wondering when that brilliant fall foliage will follow.

Man shot and killed woman, then himself at NC newspaper office, police say

A Newton man shot and killed a woman and then took his own life at the Newton newspaper office on Friday, the Newton Police Department confirmed Tuesday.

A young woman takes a photo of  four wall panels that were dedicated as the East Marshall Street Well Project during a ceremony at the VCU Medical Center in Richmond, Virginia on Friday, Sept. 24. The panels tell the story of 19th century human remains discovered in an abandoned well on the MCV campus in 1944 during construction of a medical sciences building. The remains, believed to be of African descent, are now in the Virginia Department of Historic Resources.

VCU unveiled these panels last week in the Hermes A. Kontos Medical Science Building. They tell the story of how medical faculty stole Black bodies from cemeteries, dissected them with students and discarded them in nearby wells.