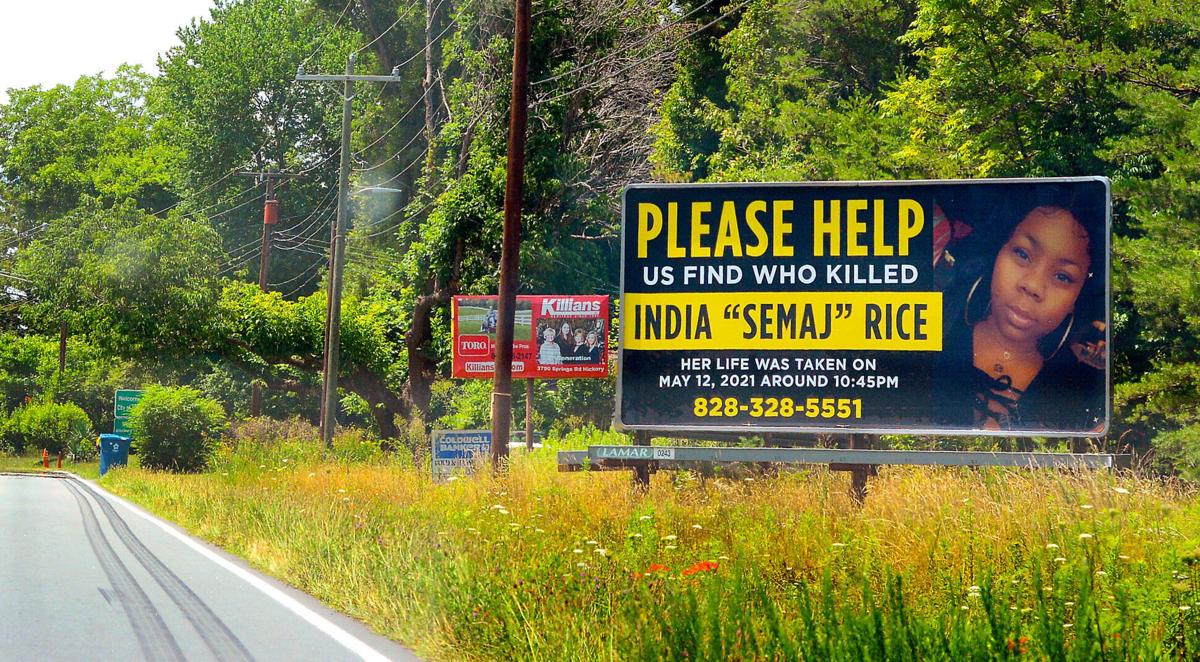 A billboard along Highland Avenue NE seeks the public’s help in solving the shooting death of India Rice. She was shot and killed May 12 in west Hickory. 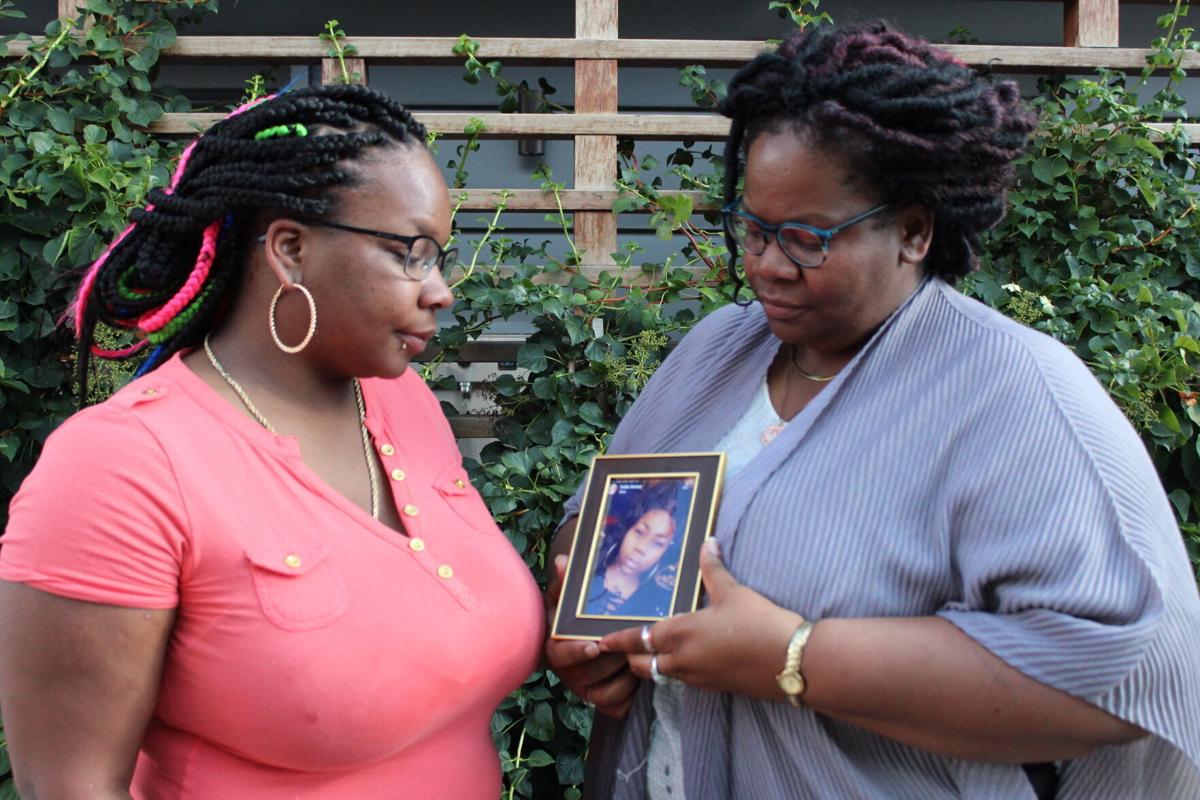 Lanora Evans, right, holds a photo of her daughter India Rice. Evans is working to find the person who shot and killed Rice. Carrie Pearson, left, is also a daughter of Evans and is supporting her efforts to find Rice’s killer.

Lanora Evans says someone in Hickory knows who shot and killed her daughter. She has purchased three billboards which urge the public to call police if they have information about the shooting.

Evans, mother of India “Semaj” Rice, said the billboards keep her daughter’s name in the public eye so people will not forget what happened to her. She said she hopes anyone with information about the shooting will come forward.

“Someone in the community knows, and someone can prove who did this,” Evans said.

Rice, 27, was killed when shots were fired into a home on 17th Street NW in Hickory on May 12. She lived there with her sister, Carrie Pearson, and several other family members. The occupants of the home included children. Rice was the only person in the house injured in the shooting.

As of July 1, the Hickory Police Department had not named a suspect in this case. Evans is not satisfied.

“I don’t think (Hickory police) are really concerned with who did this to my daughter,” Evans said.

Evans said that, after talking with Hickory police officers, she is convinced the case is not moving forward.

“In the Black community, there hasn’t been much faith in the police, and then you look at all these deaths that has happened. They love to say, ‘Nobody wants to talk.’ Why would they? Y’all don’t give any signs they are going to be protected if they do.," Evans said.

“We haven’t, as a family, been able to grieve because we don’t know who did this, and we don’t know why. You didn’t just kill India, you destroyed my grandchildren. They had to watch their aunt die and lost their innocence.”

Evans said on the night of Rice’s death she felt the investigators were trying to find a way to blame someone who was in the home. “I understand you wanting to make sure there is nothing in the home that was illegal, but they were more focused on that than finding the people who did this,” she said.

Evans has so far placed three billboards around Hickory and hopes to place more. She paid $1,600 to the Lamar Advertising Company to have the billboards posted for 30 days.

“I just want people to see her face and to ask questions,” Evans said.

Evans also started a GoFundMe drive called “Justice For India” to help raise money. The goal is to post a $10,000 reward for information about the shooting.

Evans said people have told her the names of people who may be involved in the shooting. She said the people talking to her refused to take the information to the police themselves. “I forward the names to the police, but there’s nothing they can really do because that’s third-party hearsay,” she said.

Evans said she understands the reluctance because her family is frightened, as well. In particular, Evans said her family is concerned about the people who shot into the home. Evans said her extended family is cautious about revealing information about where they live. “I’m afraid what they’ll do. If you don’t mind shooting into a home that you know children are in … you’re capable of anything,” she said.

The family that lived in the home has since moved out for their own safety.

Despite COVID-19 and logistical woes, Tokyo 2020 to be the most inclusive Olympics

Despite COVID-19 and logistical woes, Tokyo 2020 to be the most inclusive Olympics

Warren Lee Raymond Sr., 64, pleaded guilty on Monday to two counts of second-degree murder in the deaths of his wife and son.

Questions remain as search for NC fugitives comes to an end

A frantic flight from a Hickory furniture factory in January ended Tuesday with two arrests by U.S. Marshals in a Phoenix neighborhood.

Trooper Timothy Jay Norman, 47, allegedly sold guns to 33-year-old felon Tommy Lee Hudson of Reidsville, someone Norman had known since they both graduated from basic law enforcement training in 2010, the DOJ said in court documents. Norman faces 10 years in prison if convicted.

Sheriff: Escaped NC inmate back in custody after using another name to get out of Burke jail

“It was just a bad decision, man,” said Vance Edward Hinson Jr. as he was walked into the Burke County Sheriff's Office Tuesday afternoon. Authorities said that he was mistakenly released from the jail Friday when he used another inmate's name and staff failed to follow protocol.

A billboard along Highland Avenue NE seeks the public’s help in solving the shooting death of India Rice. She was shot and killed May 12 in west Hickory.

Lanora Evans, right, holds a photo of her daughter India Rice. Evans is working to find the person who shot and killed Rice. Carrie Pearson, left, is also a daughter of Evans and is supporting her efforts to find Rice’s killer.