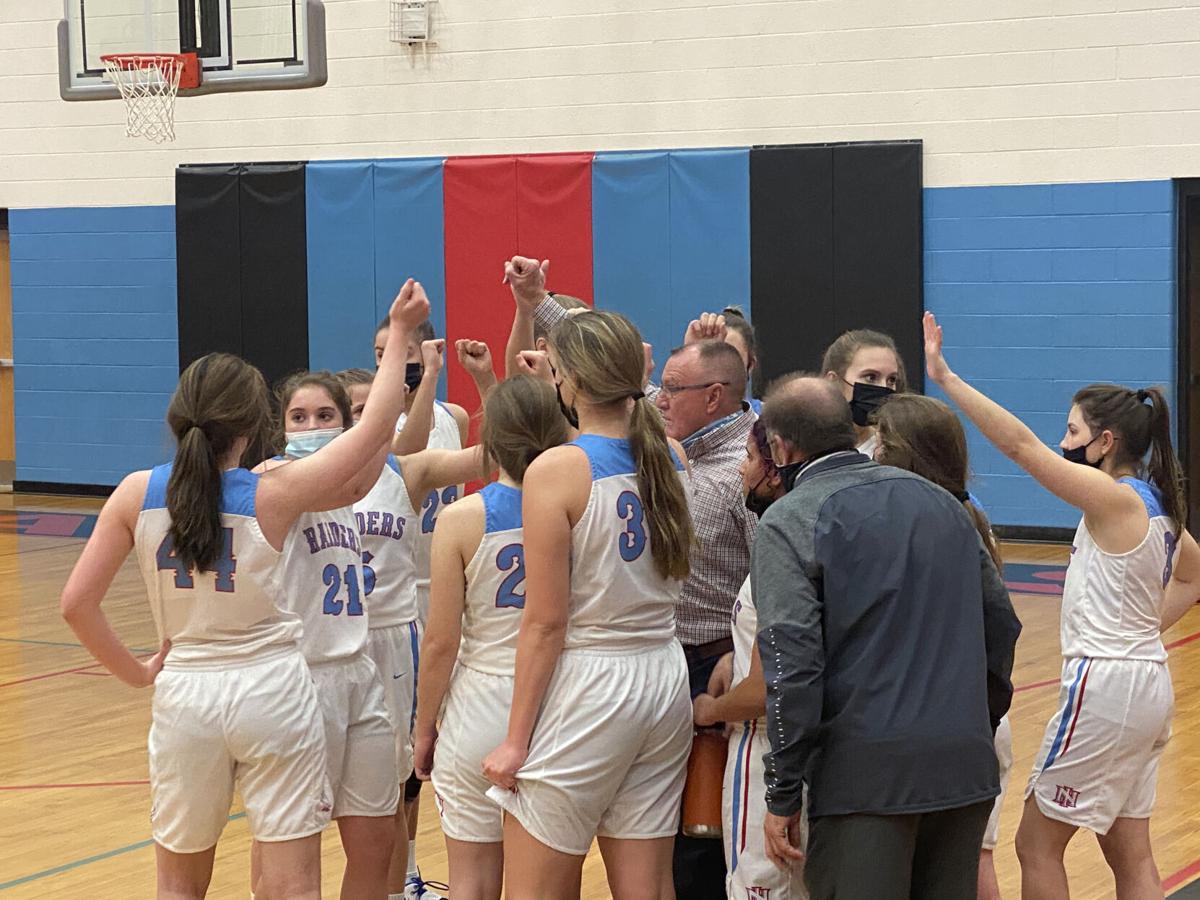 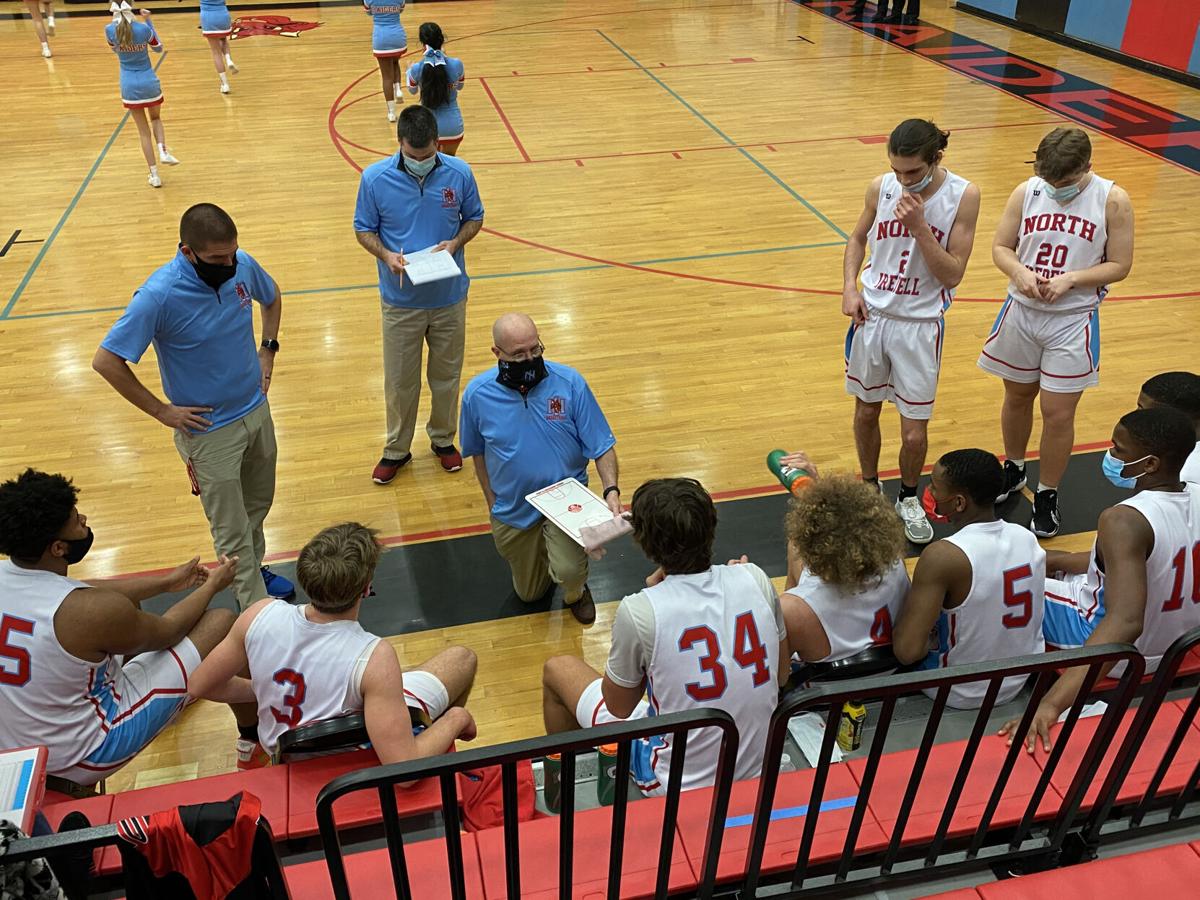 After the first eight minutes of the game, it looked as if it was going to be a long night for North Iredell.

After scoring the first points of the game in the opening minutes, they failed to make another bucket while South Iredell went on to connect on four three-pointers to lead 14-2 after the first quarter.

“I told them after the first quarter that if they’re gonna play like this, I’m just going to sit down,” North Iredell head coach Roger Bumgarner said. “But after that, we turned our intensity up and never looked back.”

Guill’s stellar offensive night may have lit up the scoreboard, as she finished with 25 points on the night, but it was the Lady Raiders’ defense that put on a show.

After falling into a deep hole to start the game, North Iredell held the Lady Vikings to just six more made baskets the rest of the game. South Iredell would finish the game 11-of-43 (25.6%) from the field, including a 4-for-20 performance from three-point range where they missed their final 13 attempts.

North Iredell also made sure that the Vikings couldn’t get anything easy as the game wore on by outrebounding them 24-19.

Junior forward Bailey Barzee was the key for the Raiders in the paint, grabbing 10 rebounds to go along with her eight points.

The game was also Guill’s second in a row scoring at least 20 points. She shot 9-of-13 from the field to get there on Tuesday while also grabbing four rebounds.

“This is two games in a row that she has come up super big for us,” Bumgarner said. “She’s like a bolt of lightning. I’m real pleased with the way she played.”

Tuesday night’s win was the Lady Raiders’ first time winning consecutive games since February of 2019 when the team went 19-6 losing in the second round of the state playoffs. It comes at an opportune time for North Iredell to have some momentum going into the North Piedmont Conference playoffs next week, but with the recent successes, it’s hard to not look forward to next year when all of the major contributors return.

“A lot of people say you shouldn’t look towards next year,” Bumgarner said. “But we improve next year as much as we did this year, good things will happen for us.”

North Iredell will travel down to South Iredell for the second half of a back-to-back on Wednesday night to make up for a game that was postponed on Jan. 22 before wrapping up their regular season on Friday with a home game against East Rowan.

Last season, North Iredell saw their last chance at an at-large bid into the state playoffs evaporate when South Iredell beat them in their own gym in the second-to-last game of the regular season.

“I brought the newspaper clipping in this week and said ‘it’s not going to happen again’,” North Iredell head coach Jeff LeVan said. “I’m very proud of my guys for how they handled the game tonight.”

Junior guard Jackson Hawkins put the Raiders up big in the first half with a barrage of threes and fellow junior Josh Jackson buried the Vikings with 16 points in the second half to leave no potential of a comeback bid by the visitors.

Jackson finished the game with a game-high 19 points while Hawkins was right behind him with 17. Beckham Tharpe also went into double digits on the night, totaling 15 points.

For the official’s sake, it was a good thing this game was never close because they could have stood to face a much more hostile crowd after calling a combined 39 fouls in the game, with 19 being called on the Raiders and 20 on the Vikings.

Both teams faced their share of foul troubles, including Hawkins, who picked up his fourth with 5:45 to play in the third quarter.

“(Hawkins) is the heart and soul of this team,” LeVan said. “Even when he was on the bench with four fouls, he’s coaching. He’s down there talking to the defense. Everything we do hinges around him.”

There is still one more hurdle for the Raiders to clear before the conference tournament begins and that will come on Friday when East Rowan pays a visit to Olin.

“We win that one and we’re co-conference champions,” LeVan said. “So we got a lot on the line - I don’t think there will be any let up.”

One killed, two injured in head-on crash on Wilkesboro Highway

One person died after a head-on crash Wednesday on Wilkesboro Highway.

One person is dead in a fire that destroyed a mobile home in Hiddenite early Wednesday.