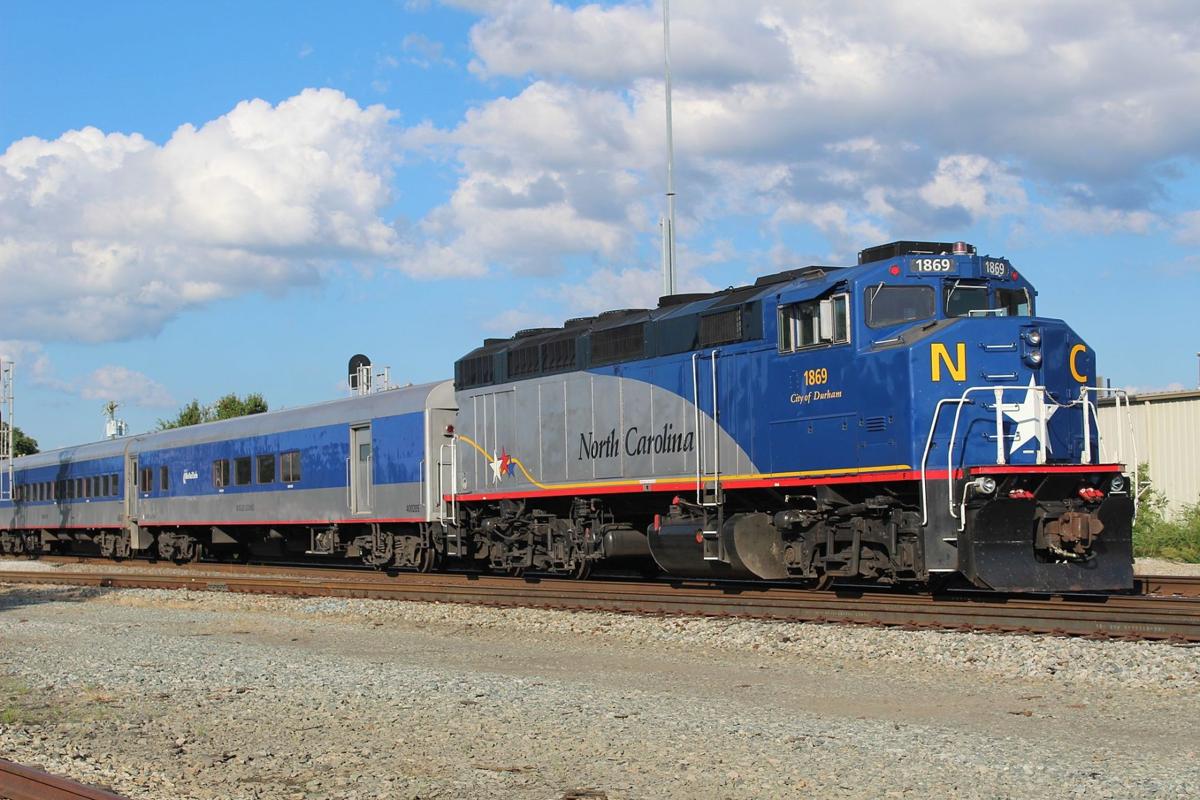 The N.C. Department of Transportation plans to convert one of its Piedmont line trains to hydrogen fuel cells. 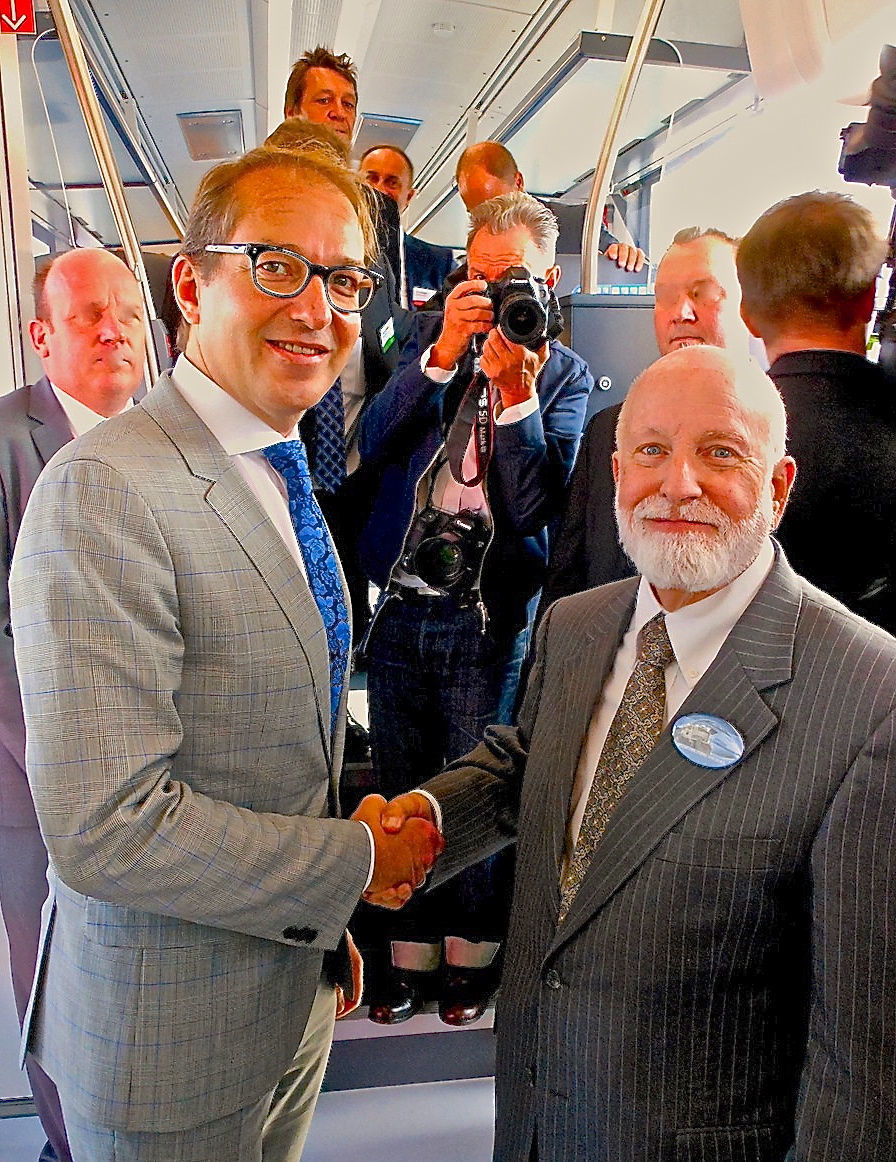 Stan Thompson (right) on board the first hydrail train with German Federal Minister of Transport and Digital Infrastructure Alexander Dobrindt at the 2016 Berlin transit trade fair.

A Mooresville man’s longtime effort to convince transportation officials to power passenger trains with a cleaner, cheaper energy source may finally be on track.

The N.C. Department of Transportation is in the early stages of a project to convert one of its Piedmont passenger trains, with daily service between Raleigh and Charlotte, from diesel fuel to hydrogen fuel cells.

The transformation would make North Carolina a pioneer in “hydrail" technology.

“This would be the first of its type in this country,” said Lynn Harris, senior project engineer and program manager for emissions and propulsion technology at McDowell Engineering & Associates, a firm consulting with NCDOT’s rail division on the planned conversion.

Harris said the project is still in the very early planning stages as the state seeks funding for a feasibility study of hydrail passenger service.

By the end of 2018, state transportation officials plan to meet with their federal counterparts, who have expressed an interest in helping states that adopt hydrail technology, Harris said.

“A substantial amount of work still has to be done, but we believe we are on a good trajectory so far,” said Harris.

Although Germany, China and Canada have jumped onboard with hydrail, the global push for the innovative technology started here in Iredell County. Calling North Carolina the “Kitty Hawk of hydrail,” Mooresville resident Stan Thompson has worked for more than 15 years to make hydrogen-powered passenger trains a reality.

Hydrail, Thompson said, is the next paradigm shift in transportation.

“The transition to hydrail is comparable to when diesel replaced steam in 1925,” said Thompson, a retired strategic planner, and environmental and transportation futurist at AT&T.

Thompson is one of three founding members of the Mooresville Hydrail Initiative, along with former Mooresville Mayor Bill Thunberg and Jason Hoyle, a research analyst at Appalachian State University.

Thompson helped organize the first International Hydrail Conference in Charlotte in 2005. He since has traveled to 10 countries to encourage the adoption of hydrail technology.

Although hydrail has been adopted and proven successful internationally, the idea hasn’t caught on in the U.S.

Thompson tried to convince local leaders to use hydrogen-powered commuter trains on the Charlotte Area Transit System’s proposed Red Line from Charlotte to Mooresville, but Norfolk Southern’s reluctance to share its tracks has stalled plans for the service.

However, the idea has picked up momentum with the Piedmont project.

The NCDOT plans to add a fourth train to the line in 2020, which is one reason why the department is so interested in hydrail technology, Harris said.

The addition of traditionally powered trains will mean more pollution, particularly around the rail corridor’s stops in some of North Carolina’s largest urban centers including Raleigh, Cary, Durham, Greensboro and Charlotte, Harris said.

“We consider ourselves to have a professional and moral obligation to try and combat that whenever possible,” said Harris.

In addition to cutting emissions, a shift to hydrail also would cut costs compared to traditionally powered trains, including those using electricity, said Thunberg.

The catenary (the overhead wire used by some passenger trains to transport electricity) was invented in the late 19th century and has not really changed since, Thompson said.

Costs associated with the overheard catenary are between $10 million and $16 million per mile for passenger trains, said Thunberg.

“That is the surcharge for using 1880’s technology,” Thompson added.

The creation of a hydrogen fuel filling station could cost between $1 million and $2 million, but that’s the cost equivalent of just 2,000 feet of catenary, said Thompson.

While there are industrial suppliers that can deliver hydrogen in tanker trucks, Harris said the process eventually could get expensive.

“If this proves to be a viable technology, the state will look into construction of a hydrogen generating station,” said Harris.

Hydrogen fuel cells would also allow power to be created during off times of the day when electricity is at its cheapest, said Thompson.

While the state’s existing fleet of trains is uniquely equipped to be retrofitted with the new technology with few modifications, Harris said it’s too early to estimate the actual cost of the project.

If the state moves forward with its plans to convert the Piedmont to hydrail, Thompson said he hopes companies such as mobility and transportation conglomerate Siemens Alstom will consider coming to North Carolina to develop hydrail technology.

The sensational smoke of the “Oh, the humanity!” Hindenburg myth has hung in the air since 1937—about 80 years too long.

Nearly 15 years ago, two Mooresville residents introduced an idea that could have put the Iredell-Mecklenburg area on the map for reducing die…

The N.C. Department of Transportation plans to convert one of its Piedmont line trains to hydrogen fuel cells.

Stan Thompson (right) on board the first hydrail train with German Federal Minister of Transport and Digital Infrastructure Alexander Dobrindt at the 2016 Berlin transit trade fair.