A group of veterans from Statesville and Mooresville gathered for a group photo outside the Brookdale Peachtree facility prior to the breakfast. 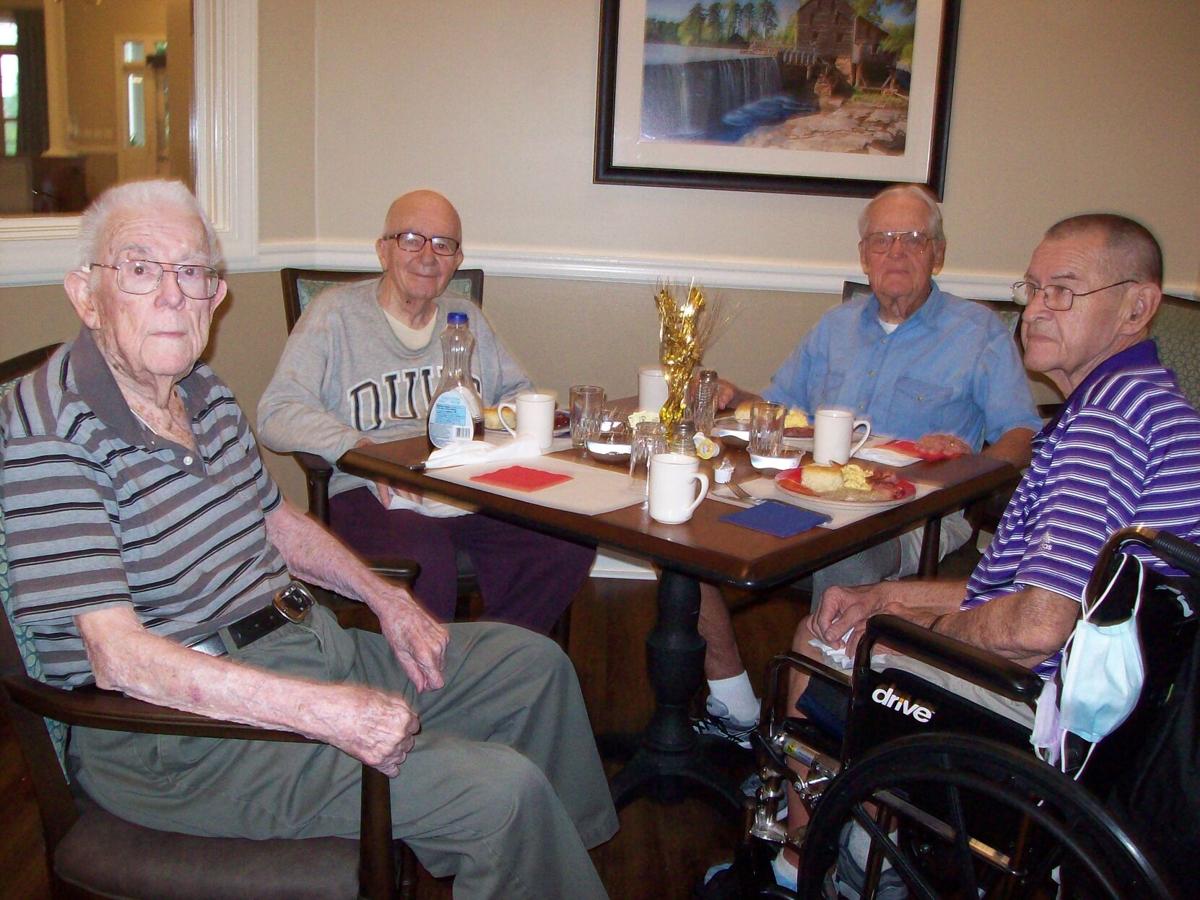 Pictured around the table at the breakfast are, from left, Andrew Pendleton, Chester Middlesworth, Garland Page and Steve Mayberry. 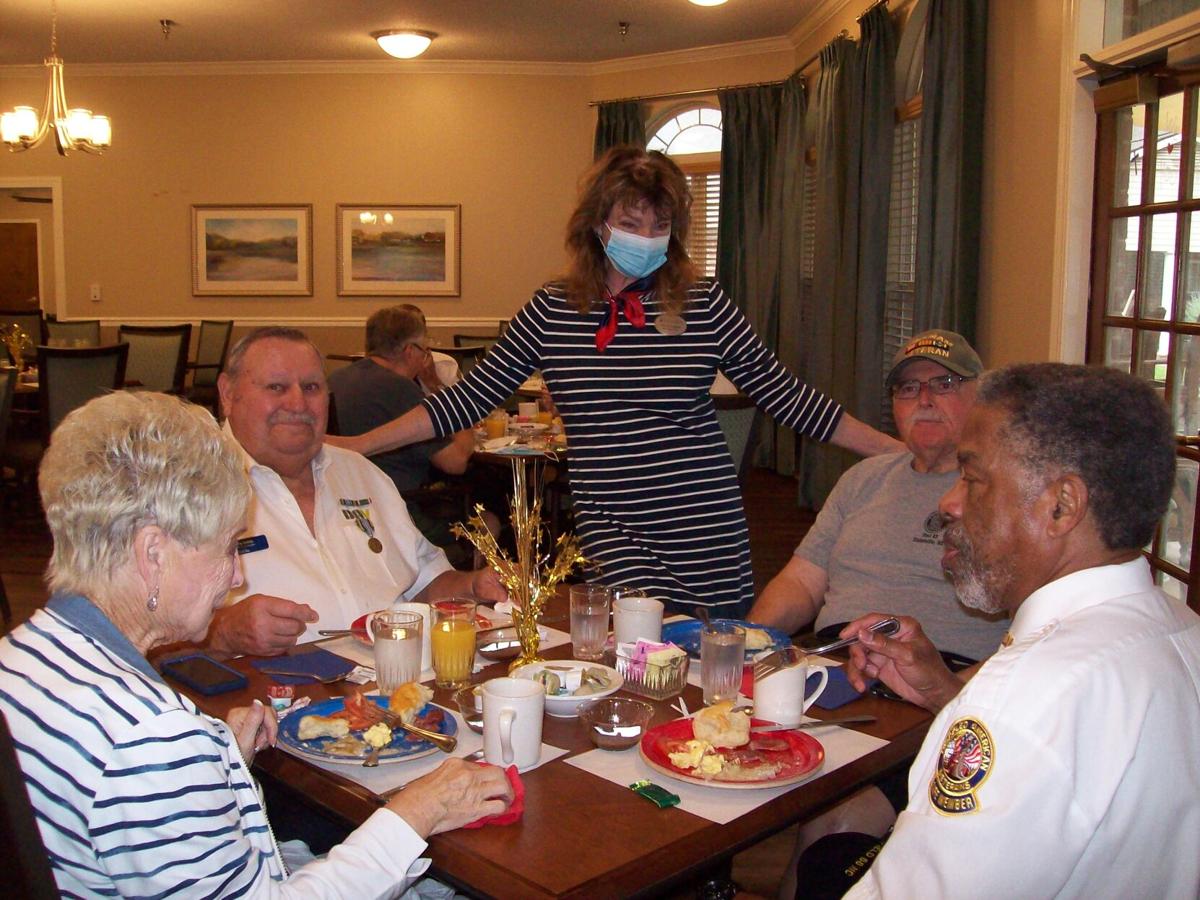 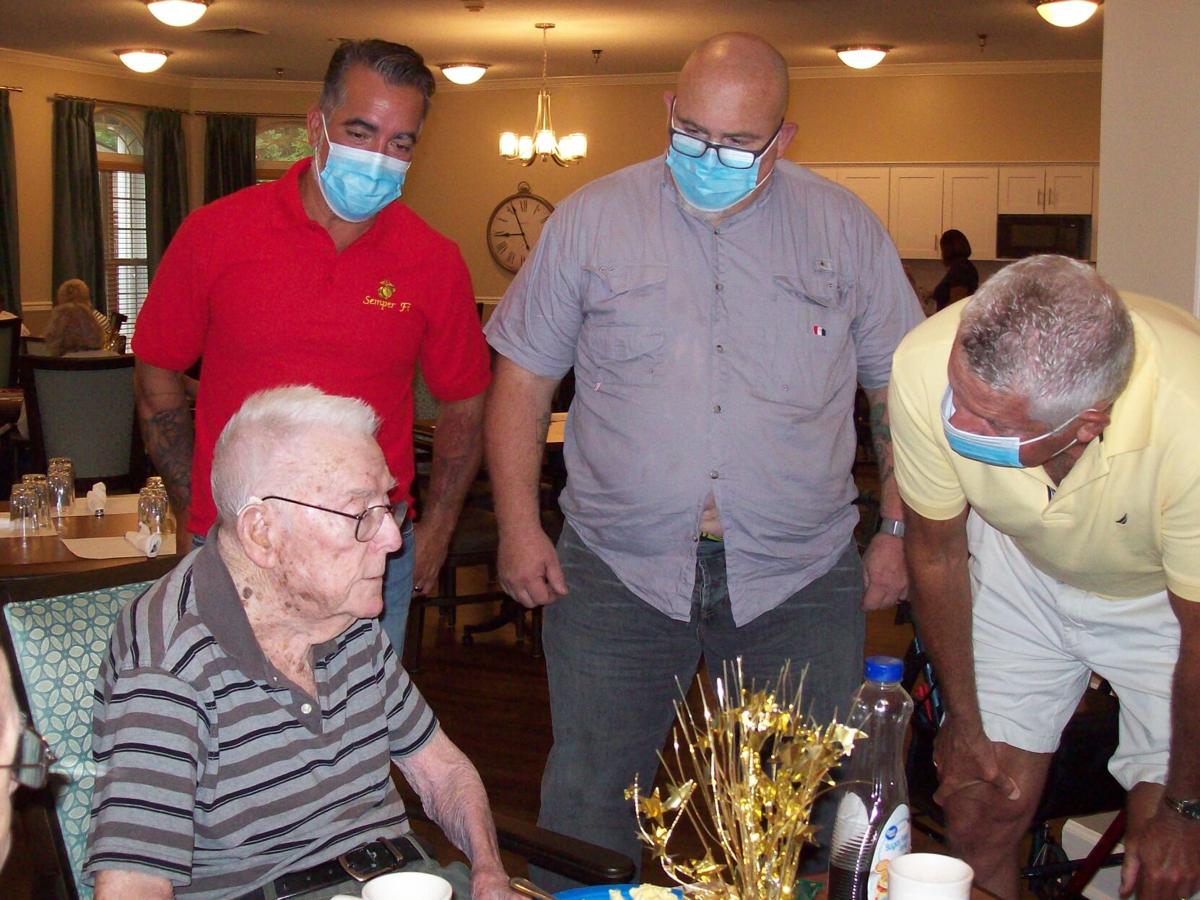 Showing support, saying thanks, giving back to the community and enjoying good food and fellowship is what the monthly veterans’ appreciation breakfast at Brookdale Peachtree in Statesville is all about.

While the breakfast continued throughout COVID as a drive through event, July 20 was their first time being able to return to hosting the event inside.

“This is our maiden voyage of returning to the dining room,” said Carolyn Freeman, senior sales director at the facility. “We are so excited. We were doing drive-bys, boxed up (meals). We never stopped serving.”

The appreciation meal is a way that those at Brookdale can give back to the community, Freeman shared. “Here at Brookdale, the key is we are providing a service to our families and our residents with quality of life and great care, but we are also giving back to our community,” she said. “What we do for these folks, this giving back is simply for them to come and engage and be a neighbor.”

Veterans, both those who are residents at the facility and others who dropped by for the morning from Statesville and Mooresville, shared that they appreciated the day and the opportunity to get together.

Jacob McCord, a Marine Corps veteran from Mooresville, said he sent out a text to other veterans in his neighborhood to participate in the special event. McCord’s wife, Tracey, who serves as the health and wellness director at Brookdale Peachtree, shared with a smile, that this was an event to show appreciation to the veterans.

Jacob noted that this special day “means a lot to us but also the residents as well, to show our support to them.” He said that the residents have had to be inside for 18 months, so “to be able to socialize with them and let them know that there are folks out here that do appreciate their service in the past and we definitely understand the importance of socialization. So, it’s good to be here and put a smile on their faces.”

Around one of the tables in the facility dining room were residents who had served or had family members who had been in the military. Andrew Pendleton, 98, a retired architect and a World War II veteran serving in the Army Air Corps, was one of those individuals. He shared that he had served in Italy for two years and one in the United States.

“I flew 27 missions against the Germans,” he said, “and no one on the plane that I was in ever got hurt. We had 40 holes shot in the plane one day.”

Also gathered with Pendleton were Chester Middlesworth, who served in the Air Force in Korea, Garland Page, also a Korean War veteran who served in the Corp of Engineers and Steve Mayberry, who said he had not served, but his father had died while in service.

Mayberry said that “these men (who have served) impress me every day.”

When asked what this appreciation day meant to them, it was Pendleton who shared that “there are others who believe in patriotism and love of country and flag. Veterans feel a great deal of love for this country.”

Scattered throughout the room were veterans from the community who attended the event and likewise shared how thankful they were.

Charles Neal, a Vietnam War veteran serving the United States Army and who is a member of the Littlefield Chapter of the DAV in Statesville, said, “to me it means a lot because I feel veterans did a lot when they sacrificed themselves to go to different wars for this country and a lot of people don’t recognize that.

“Also, you have a lot of people out there and I feel that a lot of other soldiers feel we deserve certain rights, but we get denied those rights. So any time anyone does something like this for veterans, we’re always appreciative of it.”

Jerry Goble, who serves as the senior vice commander of the DAV, likewise expressed his appreciation for the event. He noted that Freeman and those at Brookdale have been “showing their appreciation for veterans and trying to help us, and this is one way we show our appreciation back to her.”

Don Carr, a Vietnam War veteran, and also a member of the local DAV chapter and American Legion Post 65, said he felt “blessed and thankful for family and friends that we can gather together and celebrate the love and appreciation.”

Mark Armstrong, who also served in the United States Army in Vietnam, noted that “it’s nice to be getting together with veterans now after this COVID stuff because I’m afraid it’s going to come back again. It’s time to get out and get involved with people. We’ve got a lot of organizations – the VA, VFW, American Legion, the DAV – they all need help. We all need new members.”

Freeman shared how the members of the DAV have been strong advocates of the appreciation events, and “have been literally encouraging others to come, so we are growing. Where it was one or two is now like 30.”

And they want the group to continue to grow and extend an invitation to the meals, which are offered every third Tuesday at 8:30 a.m. at Brookdale Peachtree, 2806 Peachtree Road, Statesville. Those interested in learning more can call 704-872-1946.

Shameka Smith, director of Brookdale Peachtree, said they wanted to get the word out to the rest of the veterans and get more participation. “It’s an honor just coming back from COVID, being able to host an event on the inside, Smith said. “We’ve done it for quite some time. We’ve just hosted it on the outside.”

Freeman took a moment to speak to the gathered group, publicly thanking the chefs who received a big round of applause and noting that “of course we could not do this without the help of the Lord, leading us and getting us to a great place as neighbors.”

She also pointed out the residents who had joined the group that day. “They are so appreciative to know you are out there, thinking of them. Veterans look out for veterans,” she shared. And with emotion, she said, “thank you so much for your service. This is an important moment where we just say thank you to one another.”

A fatal fire is under investigation on Loram Drive, near Troutman Tuesday night.

The following is a list of those booked at the Iredell County Detention Center on felony and driving while impaired charges from July 15-21. L…

Two men were arrested after authorities executed a search warrant at a Statesville home Tuesday.

The Iredell County Sheriff’s Office is investigating a pair of deaths after a fire Tuesday night in Troutman on Loram Drive.

An abandoned vehicle found in a field lead to the arrests of five people on a wide array of larceny and other charges.

Interstate 77 near I-40 closed due to hazardous materials situation

The northbound lanes of Interstate 77 are closed between Interstate 40 and Exit 54 due to a hazardous materials situation.

The following deeds were filed in the Iredell County Register of Deeds office from July 6-12. For more information regarding specific plots of…

As a pastor, the Rev. Kenny Wallace of Providence Church Of The Living God is always praying for people’s well-being, but on Saturday, he was …

A Harmony man is facing 18 counts of statutory sex offense with a child after an investigation by the Iredell County Sheriff’s Office.

A group of veterans from Statesville and Mooresville gathered for a group photo outside the Brookdale Peachtree facility prior to the breakfast.

Pictured around the table at the breakfast are, from left, Andrew Pendleton, Chester Middlesworth, Garland Page and Steve Mayberry.