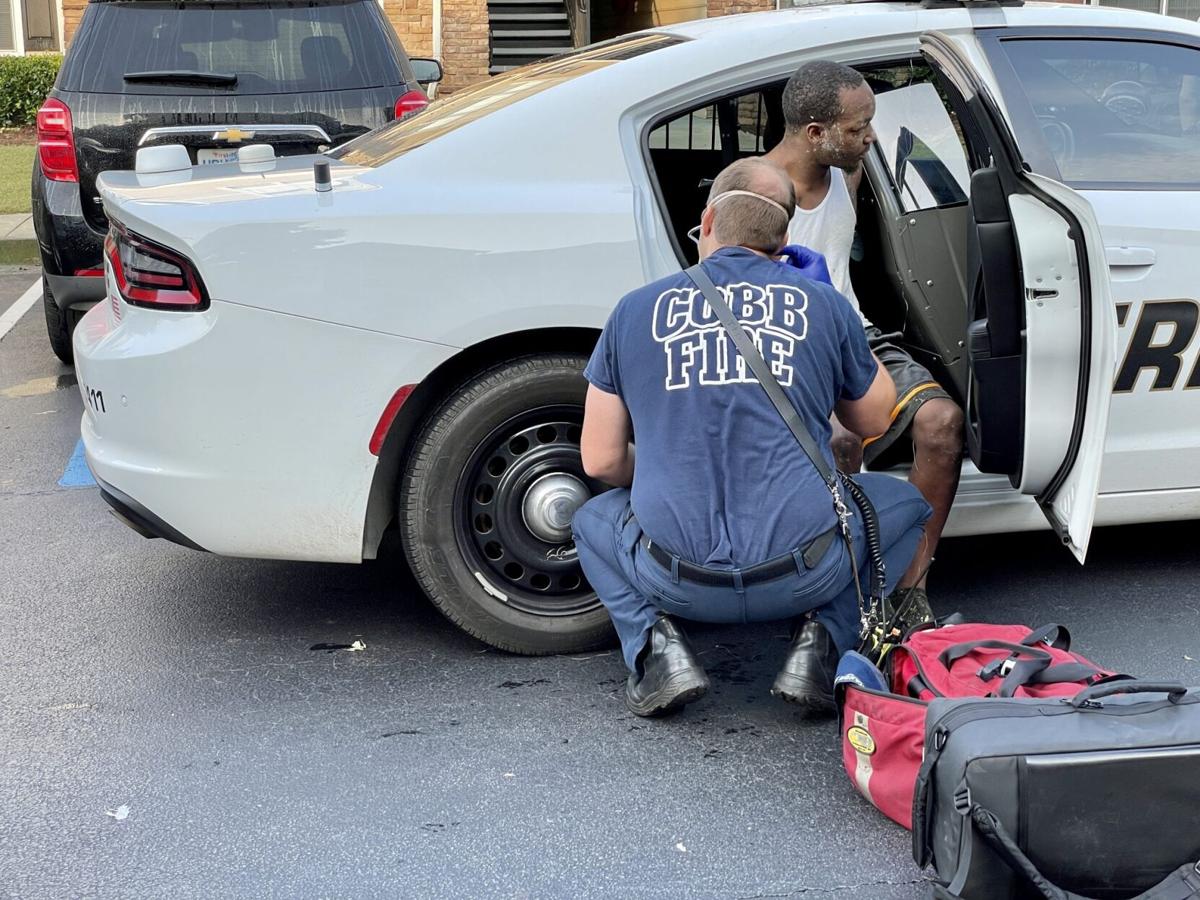 Tyrell Daniels being medically checked by Cobb County fire personnel after his arrest. 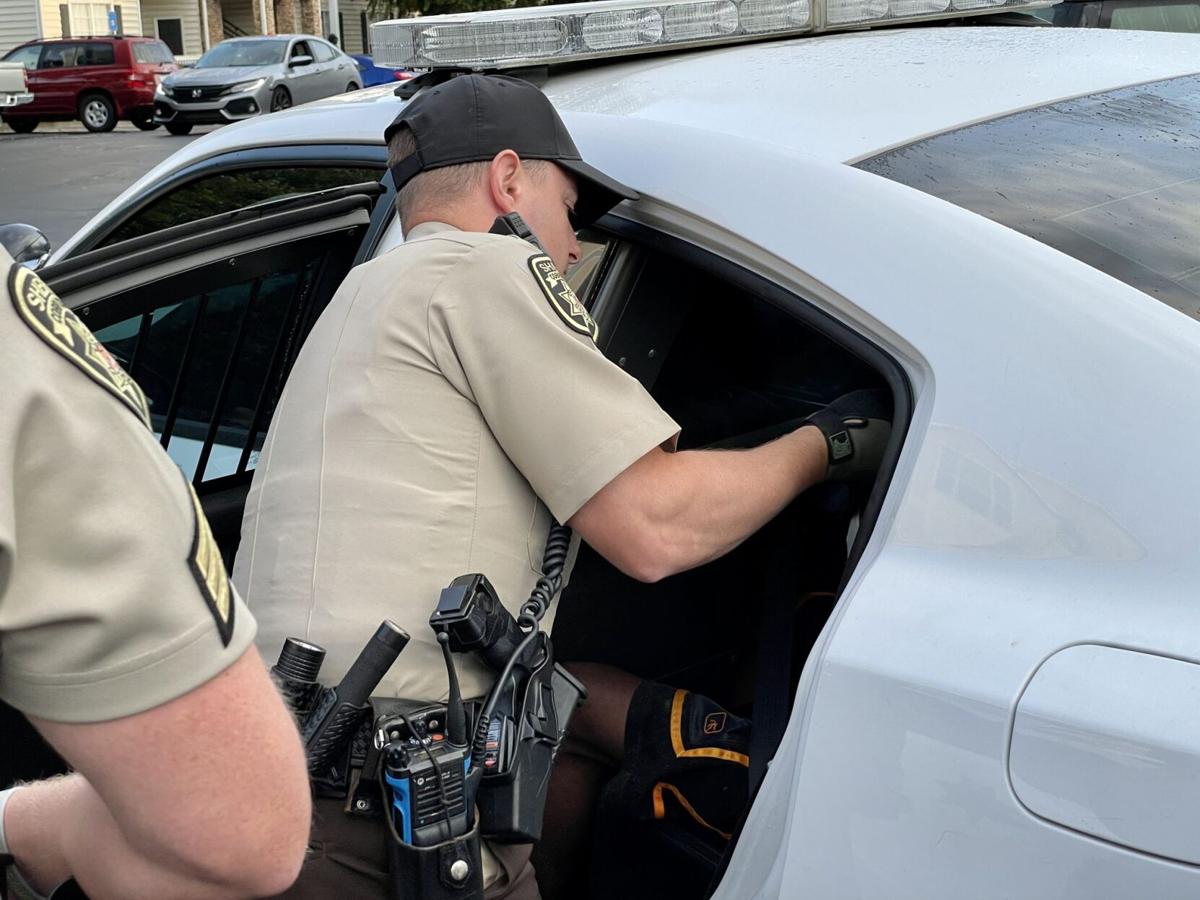 Tyrell Daniels is placed in the back of a patrol car by a Cobb County sheriff's deputy to be transported to a detention center in Georgia. 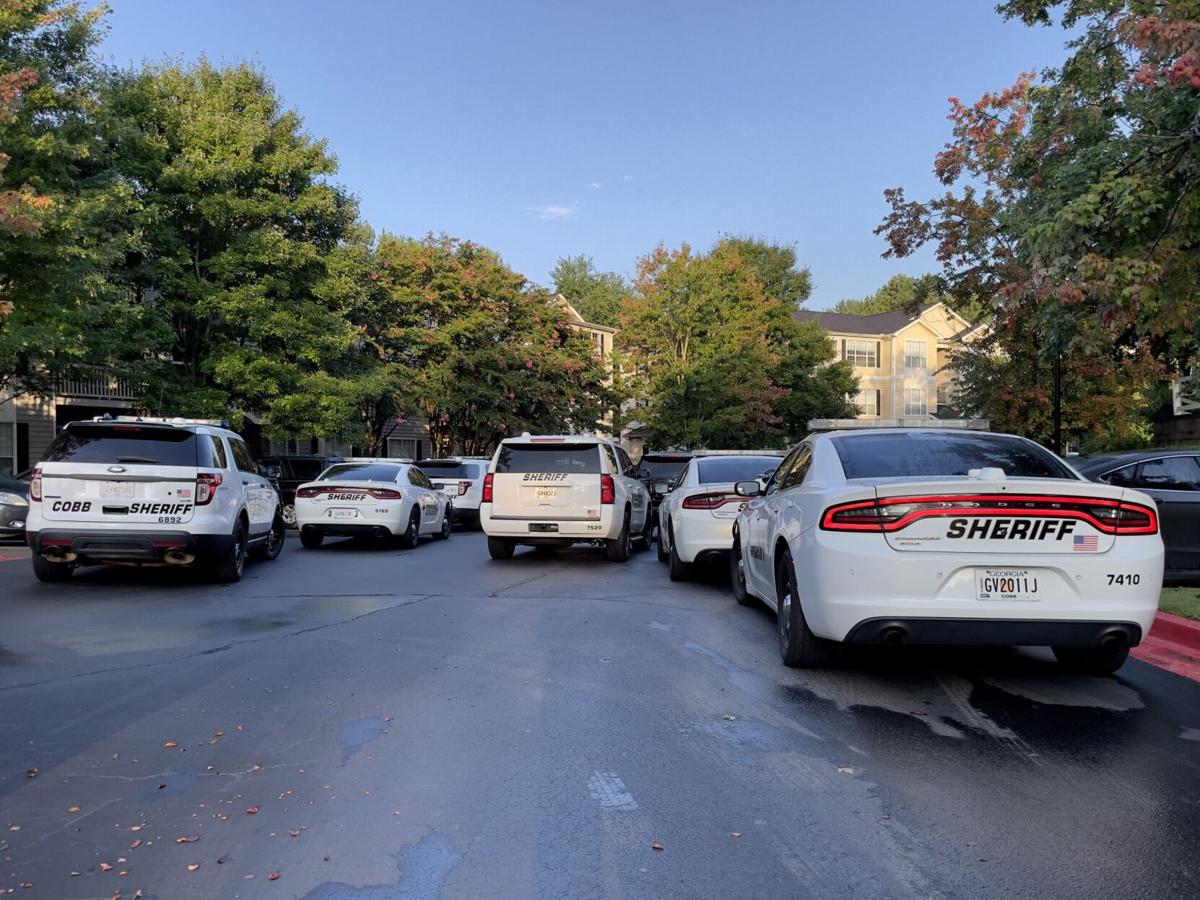 Cobb County Sheriff’s Office vehicles are parked at the entrance of Creekside Drive in Kennesaw, Ga.

The search for an Iredell County murder suspect is over after U.S. Marshals and Cobb County (Georgia) sheriff’s deputies arrested Tyrell Dantaye Daniels in Kennesaw, Ga., on Wednesday. Daniels had been on the run since June when the Iredell County Sheriff’s Office issued a warrant for his arrest.

According to a press release from the Cobb County Sheriff’s Office, it assisted the U.S. Marshals Southeast Regional Fugitive Task Force in the arrest of Daniels in the area of Creekside Drive in Kennesaw.

Iredell County Sheriff Darren Campbell said the ICSO had been aware that Daniels had fled the county and the state of North Carolina for some time. He said that in cases like this, law enforcement agencies share information in a collaborative effort to bring suspects in.

“We worked to develop information and had sent deputies to Florida and other states in the course of our own investigation,” Campbell said. “But credit to the Cobb County Sheriff’s Office and U.S. Marshal for apprehending him today.”

The task of arresting him wasn’t easy, however, authorities said.

The CCSO stated that as the U.S. Marshals made entry into the residence, Daniels retreated to the attic and refused to comply with verbal commands to exit the attic space. While that was happening, Cobb County sheriff’s deputies and U.S. Marshals evacuated the apartment building for the safety of the residents, while other law enforcement personnel arrived to assist.

However, Daniels still wasn’t responding to the U.S. Marshals’ continued commands, which led to them using what was described as “a chemical irritant” to force him out, which then triggered the building’s fire alarm, the release indicated.

After a struggle, Daniels was removed from the attic area and arrested. He was treated on the scene by Cobb County Fire personnel for exposure to the chemical irritant and nonlife-threatening injuries. Daniels was transported to the Cobb County Adult Detention Center and is awaiting extradition back to North Carolina.

In June, the Iredell County Sheriff’s Office named Daniels as a suspect in a homicide investigation and secured a warrant for his arrest. Daniels, who also goes by Lil Buckey, was considered armed and dangerous. The warrant stemmed from an investigation on June 8 after an early morning shooting that occurred on Williams Road on the west side of Statesville.

The sheriff’s office arrived there, and to a secondary scene at Iredell Memorial Hospital shortly after 3 a.m., where one victim was confirmed deceased at the hospital. The man was later identified as Zion Treyshaun Gaither, 20, of Hickory.

In a news release on Tuesday, the ICSO detailed more of its work on the case.

“The Iredell County Sheriff’s Office has worked tirelessly on this investigation from the morning the incident occurred. Homicide Team Detectives interviewed numerous witnesses and persons of interest. They applied for and received many search warrants which produced evidence in this case. Iredell County Sheriff’s Office Homicide Team Detectives traveled to, and followed up on information which took them to Florida, and Georgia,” Campbell said in the news release.

“I want to thank the U.S. Marshals Southeast Regional Fugitive Task Force, the Cobb County Georgia Sheriff’s Office, and other law enforcement partners who assisted in this investigation. I am very happy this murder is in custody, and also happy the officers, and deputies involved in locating, and arresting him are safe because he has made threats of using violence against law enforcement officers in the past,” Campbell said.

John Hinckley to be released from oversight

John Hinckley to be released from oversight

Watch Now: Phone apps that help you during natural disasters

Watch Now: Phone apps that help you during natural disasters

The following deeds were filed in the Iredell County Register of Deeds office from Sept. 10-16. For more information regarding specific plots …

A South Iredell High School student has been charged with one felony count of false report of mass violence on educational property.

There’s no question that the Raider Meet at North Iredell High School was a competition, but it was also a test of the JROTC cadets as they ta…

Tyrell Daniels being medically checked by Cobb County fire personnel after his arrest.

Tyrell Daniels is placed in the back of a patrol car by a Cobb County sheriff's deputy to be transported to a detention center in Georgia.

Cobb County Sheriff’s Office vehicles are parked at the entrance of Creekside Drive in Kennesaw, Ga.