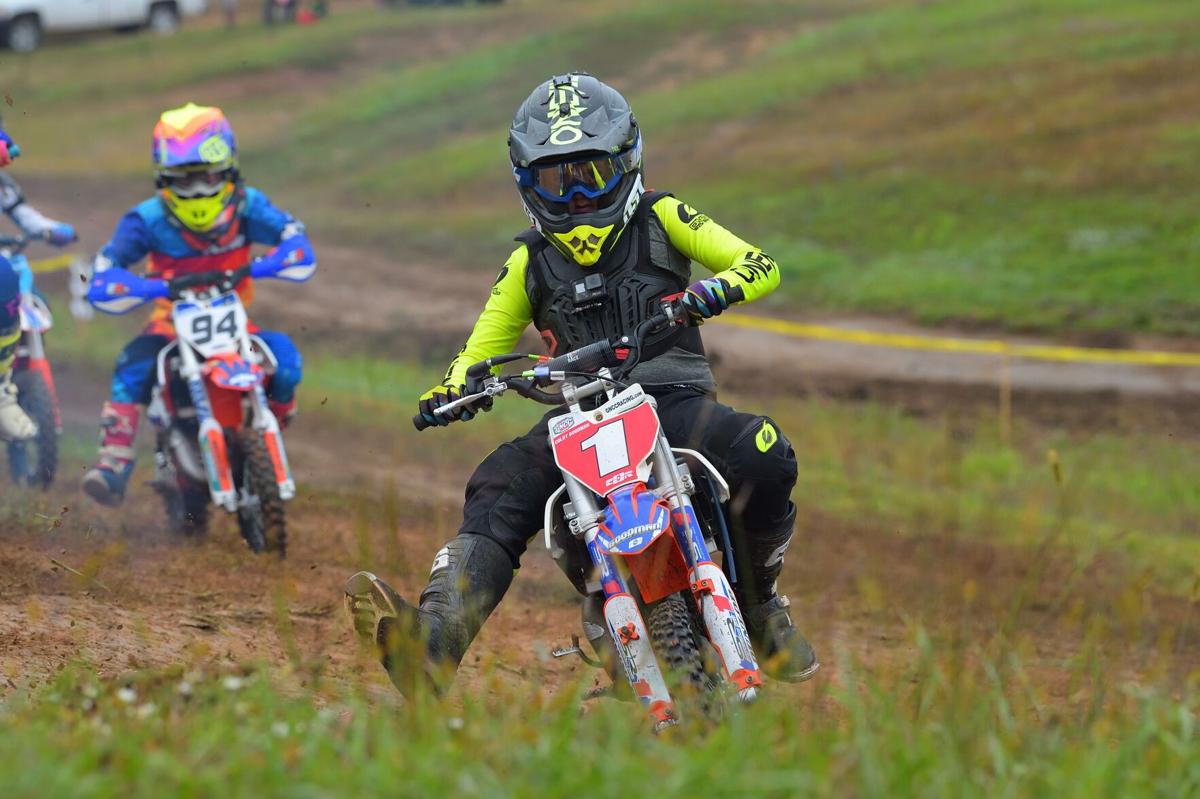 Colby Goodman races in a competition. 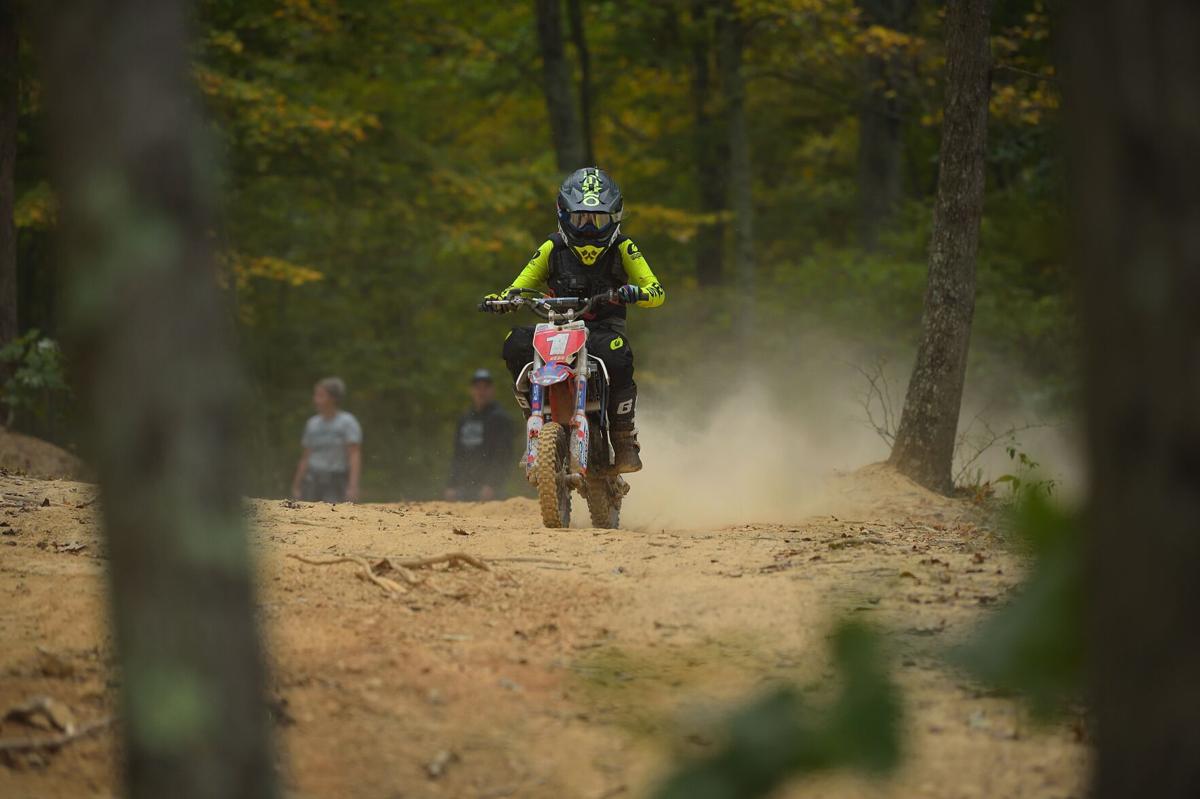 Colby Goodman is a champion racer at the age of 10. 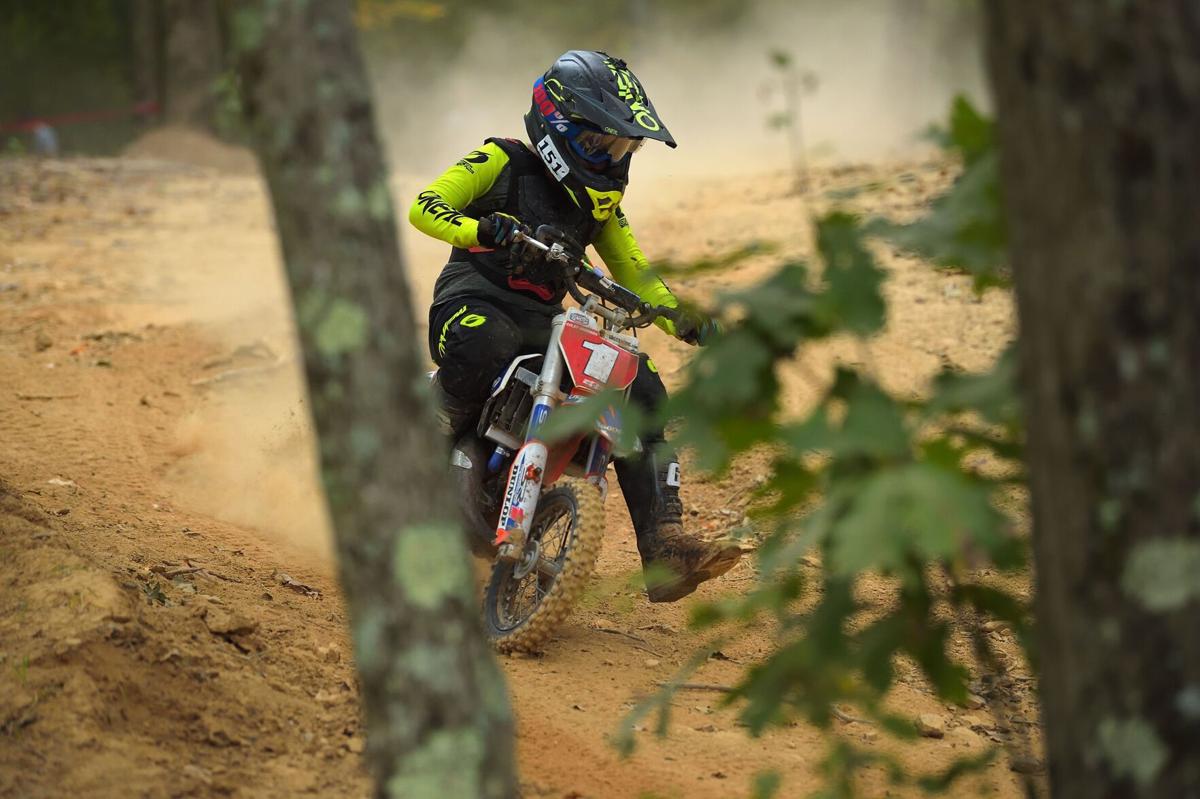 The rugged terrain is part of the challenge for Colby Goodman. 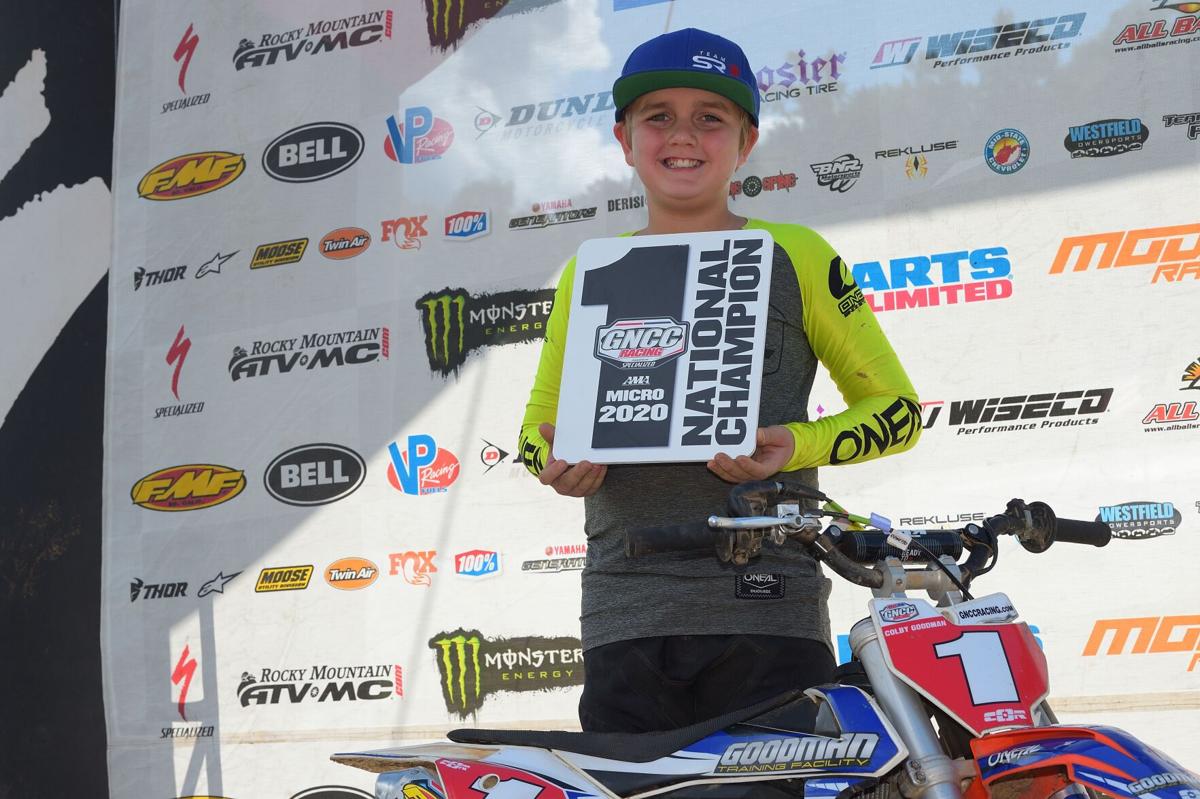 Colby Goodman spends his free time training and traveling in pursuit of his racing dreams.

This year, that once more paid off as he snared his second Grand National Cross Country championship this season. The 10-year-old Olin native won the 2020 Micro Overall title.

“It was fun,” he said of winning back-to-back titles. “It was real exciting but I had to work really hard.”

Colby is now turning his attention to the 85cc division for next season.

For the Goodman’s, racing is a family affair.

He and his family travel across several states in pursuit of his title. He’s following in the footsteps of his dad and older brother in pursuing his dreams in the national series.

“It’s a track that runs through the woods, through trees and hills and all that … No outdoor big track or anything where the public can see, it’s all through-the-woods racing,” said Lisa Goodman, Colby’s mother.

The race is timed; in the championship that Colby won, it’s a 30-minute race involving five to seven laps with the fastest each lap getting the overall championship. It sounds quite treacherous. Competitors follow arrows that are color-coordinated for age groups as they navigate the track.

“Some parts it’s roughly the width of your shoulder, maybe five to six foot wide all the way up to maybe 10 foot wide, between trees, going up rocks, roots, crossing creeks,” Lisa Goodman said.

The most challenging thing about the series?

Colby has been steadily moving up through classes since he began racing at age 6. He started out riding around the house, then moved into the cross-country competitions. That change took a bit of adjustment.

“I was nervous the first time I raced, and it was really weird to race through all the woods because I had just been riding in the front yard,” he said.

In the series, the riders are all on the course together with arrows marking the track. One competes based on their age group.

“Your front row is racing against their own row but then also racing against the second and third row,” Lisa Goodman said. “So, if someone from the second row passes the first row then they have a chance for what they call an overall championship or overall win because overall the race, they can also win their class. So, you have two different things you are chasing — you’re going for your overall wins and then your class wins.”

This year, in nationals, Colby Goodman completed 13 rounds of competition. He and his family traveled to South Carolina, Florida, Georgia (twice), Ohio, Pennsylvania, West Virginia, Virginia and Indiana to compete. There are usually 15 to 25 competitors in Colby’s class and sometimes, with the nature of the racing putting everyone on the course, there are 50 to 75 riders out there on the track, which can be about a mile-and-a-half.

The families are more than competitors. They encourage one another on the courses. With the layout of the events, there is not a public viewing of the competition. It seems the families, though, more than make up for that.

“It’s fun,” Lisa Goodman said. “I enjoy rooting on, of course my kid but also all the other kids. You’re out there to support all of the riders. We pull other riders up the hill, pull our own kids up the hill if they can’t make it in a muddy race. You’re out there cheering for your own but also cheering for the other riders even though they aren’t riding for the same team, they are riding for their own wins. You want to see everybody succeed.”

The racing is also preparing Colby for life in general. He’s responsible for his own equipment and for making sure he gets to the track with all of his gear. That’s an important element when one is racing nine hours from home. He has to stay in racing condition, so his training extends beyond just racing on the weekend. He says that he trains with his dad, jogging near their home for about an hour every day and bike riding to stay in shape for the races.

Colby is doing just that. Now he’s navigating a transition too. Next year he’ll be on the heavier bike of the 85cc class.

“You’ve got more power and more weight added because it is a bigger bike. It also makes it easier to get through the trails because you have bigger front wheels and bigger rear wheels so you’re able to ride through harder terrain and get up some of the muddier and steeper terrain because you’ve got bigger wheels,” Lisa said.

Colby is ready for the challenge but recognizes the transition he faces.

“I think it will be fun but I’m going to have to put a whole lot more work into it,” he said.

He works to balance his training and schoolwork, the difficulty of which he says varies based on how much schoolwork he has. He also adapts as needed, such as with his training right now.

“I was riding a little bit and then my bike blew up,” he said of his offseason training. “ … I haven’t ridden any in the last two weeks because it’s been raining a lot at our house.”

And although he’ll be vying for another title, he’ll also be embracing the experience. As with most racing series, the competitors form a tight-knit community — one that values more than just on-track success.

That is clear as both Lisa and her son assess what racing means to their family. While Colby enjoys his championships, that’s not the first thing he mentions when he talks about the motorcycle racing that he hopes to make his career. What does he see as the best part?

“Getting on the track and being able to hang out with your friends and be able to go race the next day,” he said.

Sudanese man in NYC unable to talk to family

Colby Goodman races in a competition.

Colby Goodman is a champion racer at the age of 10.

The rugged terrain is part of the challenge for Colby Goodman.