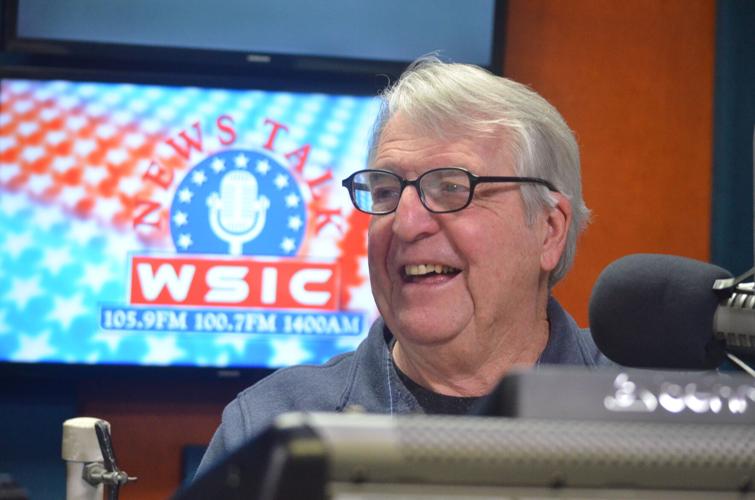 Pat Shannon laughs as he prepares for an episode of the HomeAd Show at WSIC in Statesville on Tuesday. 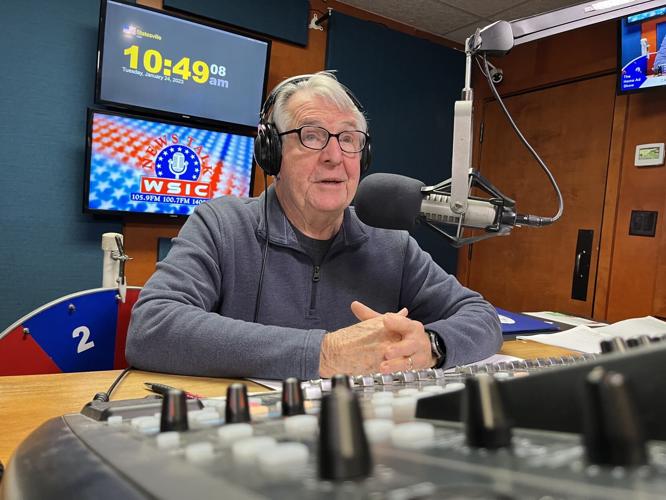 Pat Shannon during an episode of the HomeAd Show at WSIC in Statesville on Tuesday. 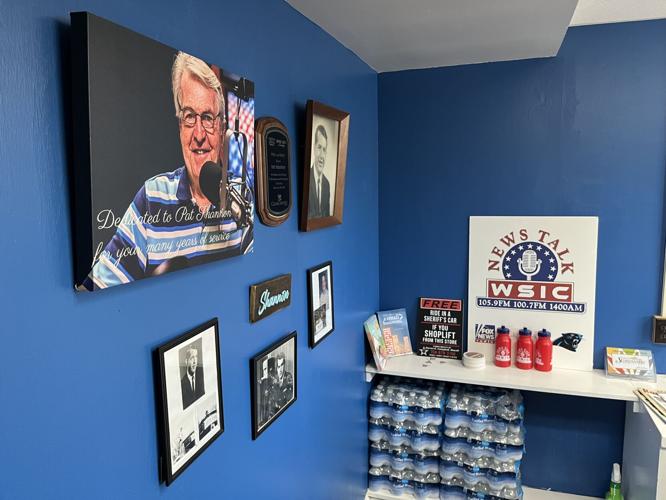 Photos of Pat Shannon hang on the wall of a break room at WSIC in Statesville on Tuesday.

It was four decades ago when Pat Shannon retired from the Air Force that he assumed his days in the broadcast business were mostly done. But he has worked another four decades and graced the airwaves locally on WSIC.

On Friday, he'll celebrate his 80th birthday in a number of ways, including another episode of HomeAd Show at 9 a.m.

"It's hard to wrap my head around this number thing, 60, 70, we're no big deal," Shannon said. "Forty was a big deal for me because I retired from the Air Force, I was like I don't have to do anything ... and now that's 40 years now. It happens so quickly."

"It's like I just came home, still had my uniform on, and found myself up here at the radio station again."

And while the years have gone by quickly, the number isn't lost on him. He said he takes pride in his work as he passes another milestone.

"I feel fortunate and blessed at my age to in someway contribute to Mark's (Sanger, owner of WSIC) business and our community with this show," Shannon said.

One reason he still does the show is simple: He loves what he does and the audience looks forward to hearing him every day. His success over the years is attributed to simply caring about listeners each day.

"To have empathy," Shannon said, explaining how the show HomeAd might have him helping someone sell some chickens. "That's their lifestyle, that's what they do. I try to project that and make it funny."

He said he is aware for some listeners, the show and radio station are their portal into the outside world.

While HomeAd is on its surface a show for selling items to other members of the community, Shannon shares community happenings, birthdays and anniversaries to create a sense of community.

"They really like to call in and connect," Shannon said.

Shannon's time with radio began early as even before he ever worked at the station, he would do odd jobs there in hopes of breaking into broadcasting at some point. Shannon would join the Air Force in 1962, but returned to Statesville in 1965 for a short time before his return to the military in 1966 — as a broadcaster there too — before he retired in 1985.

He wasn't exactly planning a return to the airwaves locally when he left the Air Force, but he began his work again serving as a station manager among his other jobs at WSIC.

Shannon once again planned an exit in 2005 as the station's ownership changed hands, hoping to spend more time with his wife Sonja and enjoy retirement and travel.

"Then she got tired of me being home," Shannon said jokingly.

It was at that time that the new owner, Mark Sanger, asked Shannon if he wanted to come in a fill some timeslots on the air.

"And I'm still here," Shannon said. "I turn 80 on Friday and I'm not sure how much longer I'll be able to do it, but I do enjoy it. I love the people. I love the interaction.

"And you can imagine when you are working in something where you grew up, it's amazing. A lot of times, people have to go somewhere else to find the same satisfaction that I have here."

How much longer will he do it? He said it depends on if has the time while he and Sonja can continue to enjoy their life living on Lake Norman, as well as if Sanger wants to keep him on the air.

"And the audience. As long as I don't make a mess of things and mess up badly, I'll just keep doing it," Shannon said before joking that "There will be a day when someone comes over and taps me on the shoulder and says 'That's your last show, Pat.'"

But it doesn't appear that the audience or Sanger is in any rush to push Shannon out the door. The station's president and CEO said that along with Shannon's on-air talent, the veteran broadcaster serves as a valuable resource to him as he guides the station forward.

Sanger said along with the wisdom of the business, it is easy to see that Shannon's connection with people isn't easily replicated.

"There is a genuineness, a real genuine person that he really is. When he turns the mic off, that's how he is. Maybe it's because he's a grandpa and a dad, but he's just a member of the community and that is the way he is all the time. He's not a different person off the mic. He has a kind demeanor and a passion for people."

Shannon said that there have been many people he's worked with and listeners he's interacted with over the years. And while Shannon said each day is unique, it's hard to pick out a moment that really sticks out for him over the years, but he does remember when he created a broadcast where he announced his grandchild's birth.

"Folks I'm recording this program and at about 1 o'clock this afternoon I'm going down to Charlotte and picking up the love of my life. It's Ashley Marie Phillips, my first grandchild. What I want you to do is welcome her to Statesville." Shannon said. "So I recorded that at kept it."

When she turned 18, Shannon gifted the recording to her.

He said there have been funny moments to remember though, such as when a caller informed him of the death of another listener. So he mentioned it on the air.

"So right after it, she calls," Shannon said with a knowing smile. "'Pat, I'm not dead. I'm not even sick.' So the reports of her death were greatly exaggerated."

Shannon said he misses doing some of the on-location broadcasts the station did previously, as it was another chance to connect with listeners in a way he couldn't while at the station.

Building those connections, a capacity for empathy, as well as levity, has been key to his and the show's success.

"It's not just a way to find a buy or a deal, but a relaxing way to spend a few hours," Shannon said.

A parcel of land in Statesville, Lot 30 has seen its share of history over the years. In 1790, Patrick Hugley would sell you a half-pint of wh…

A call concerning a breaking and entering resulted in felony charges against a Statesville man.

An 18-year-old has been charged with bringing a gun to the Statesville High School campus, promoting a security alert at the school.

A traffic stop for speeding led to the arrests of two people and the seizure of 264 grams of methamphetamines, said Iredell Sheriff Darren Campbell.

The following deeds were filed in the Iredell County Register of Deeds office from Dec. 21-30. For more information regarding specific plots o…

State Department says don't use Uber in areas around Cancun

State Department says don't use Uber in areas around Cancun

Pat Shannon laughs as he prepares for an episode of the HomeAd Show at WSIC in Statesville on Tuesday.

Pat Shannon during an episode of the HomeAd Show at WSIC in Statesville on Tuesday.

Photos of Pat Shannon hang on the wall of a break room at WSIC in Statesville on Tuesday.