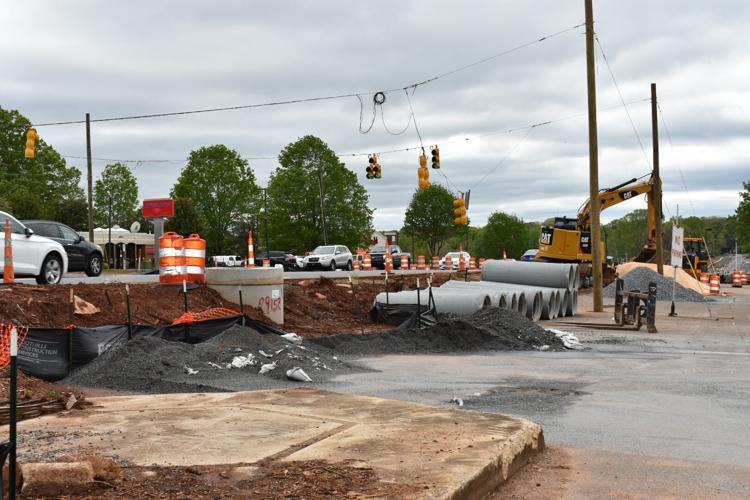 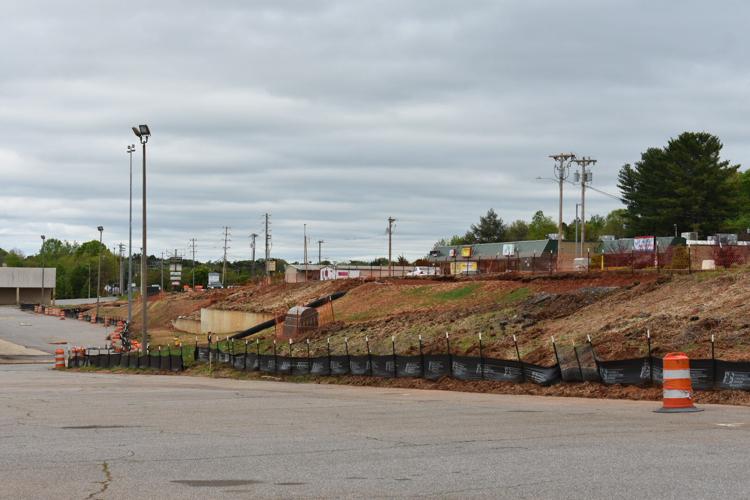 The landscape between Signal Hill Mall and Signal Hill Drive has changed due to the ongoing construction. 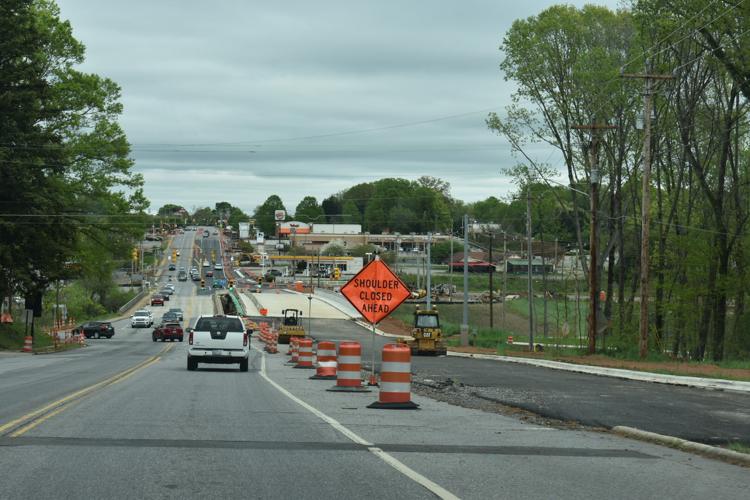 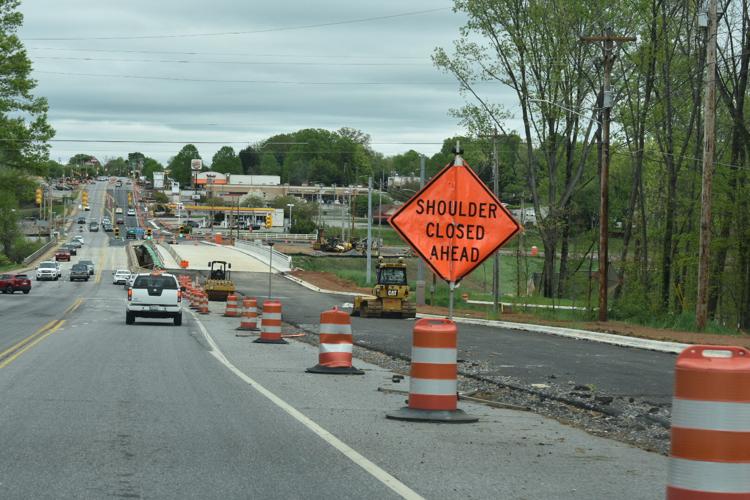 Traffic moves through the construction zone on East Broad Street. 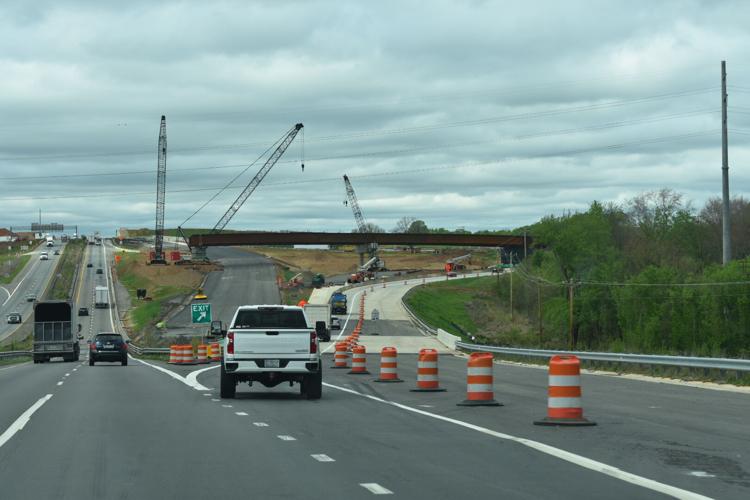 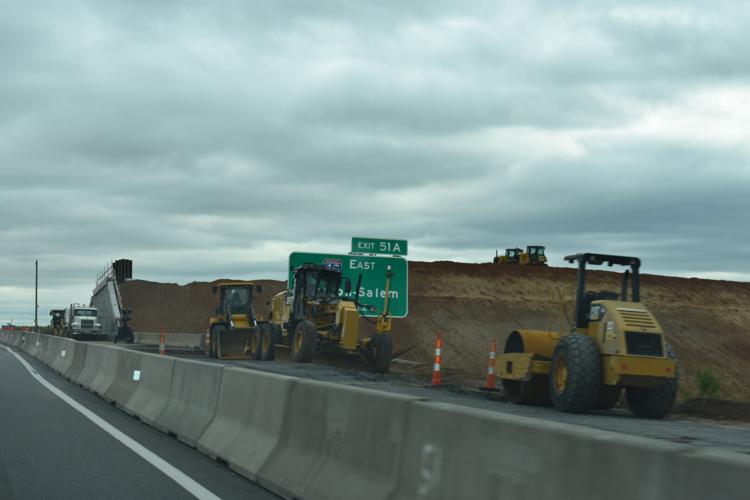 The construction zone at the cloverleaf.

As someone my age would do, I took to Instagram to ask the residents of Statesville (at least the ones that follow me) about their opinions on the Interstates 77 and 40 construction and whether they support it. Interestingly enough, 36% of followers (22 votes) said that they support the project, while 16% (10 votes) said that they did not support it. I also left a third option, titled “I do not know much about it,” and 48% (29 votes) chose this option. For the ones that said they did not support it, I asked why they felt that way. The main answers were that they either felt unsafe traveling through the construction sites(s) or that it was all just confusing and they were ready for it to be over.

What many of you may know already

As many of you know and probably encounter every day, Interstates 77 and 40 are undergoing significant changes here in Statesville. East Broad Street is also seeing some big changes in order to support this expansion of the nearby highways and make larger traffic scenes safer and more maneuverable.

The intersection at East Broad Street and Signal Hill Drive is known for stopping traffic and causing confusion for many who aren’t too familiar with the area; this will soon become a roundabout, which according to the North Carolina Department of Transportation (NCDOT), helps to “reduce the congestion and backups more typical of traditional intersections with stop signs and traffic signals.”

I-77 construction starts at Exit 49B near downtown Statesville and ends around Exit 51A-B where the I-40 interchange is, while East Broad Street construction starts at Vine Street and ends around Signal Hill Drive. While some small construction projects have been taking place here and there since 2012, the projects have ramped up recently and are estimated to finish this winter. Soon, the interstate and local intersections will look unrecognizable to many of us.

The biggest part of this construction is the addition of a partial turbine interchange at the I-77 and I-40 crossing to make transitioning to and from both interstates easier and smoother. This will include new collector-distributor lanes, which serve as additional roads that separate vehicles entering and exiting the main highway. The bridges that are being built currently on I-77 at Exit 51A-B to Winston-Salem/Asheville will serve this purpose. There will also be a general widening of I-77 in this region, from two lanes to five lanes through the Exit 50 area and then down to three lanes in both directions through the interchange.

The decision to expand the highway is driven by the increasing number of people who are coming to Statesville, and more people mean more cars passing through the area daily.

What you may not know (and what research says)

What may have stuck out to you even more recently, though, is the disappearance of trees along Signal Hill Drive and East Broad Street in front of Signal Hill Mall, and the sight of gravel, broken concrete and large machinery on top of exposed red mud. Trees, grass and shrubs are critical to maintaining soil structure and lessening the chances of erosion. With no vegetation, the soil has nothing to hold it together and as a result, it washes away with the rain and into local creeks and streams, polluting the water and suffocating the living organisms in them. Furthermore, soil holds an incredible amount of carbon, and when all vegetation is removed, the soil can become a carbon source rather than a carbon sink. It would begin to release carbon instead of absorbing and retaining it.

While NCDOT recognizes this and attempts to maintain or implement vegetation (mainly turf grass), there are still many bare areas at the current construction site. And, where there is vegetation, NCDOT maintains and ensures its growth through the prudent use of fertilizers, which is detrimental to water quality and the water ecosystem, human and animal health, and is significantly contributing to the climate crisis as its result in the atmosphere is nitrous oxide (N2O). Nitrous oxide is the largest greenhouse gas from agricultural production and its global warming potential (the amount of heat a certain gas can hold) is 298 times more powerful than the most commonly talked about greenhouse gas, carbon dioxide (CO2).

Trees and plants also help take in and infiltrate water, making the soil more porous and absorptive. When these trees are cut and no vegetation cover is present, the soil is at a much higher risk of becoming compact and not allowing water to run through. This raises the chances of flooding but also soil erosion, forcing more water to local creeks and streams (Fourth Creek in this case) and potentially increasing the creek’s rate of flow.

Among the staff is hydraulics engineers, which make sure that nearby creeks and streams can handle the runoff they may receive from vertical land alterations, such as raising land to build bridges. Federal and local agencies, such as the Environmental Protection Agency (EPA) and North Carolina Department of Environmental Quality (NCDEQ), also stop by from time to time to check on the project and make sure that protocol is being followed.

Highway construction and expansion also have significant effects on human health. According to a 2017 article published in the journal “Current World Environment,” people living near or working on highway construction projects face adverse health effects, including respiratory complications such as chronic obstructive pulmonary disease (COPD) and cardiovascular diseases.

Roads are constantly releasing aggregates and particulate matter, from tires hitting the pavement to vehicle exhausts. With the construction project comes the destruction of previous roads, the addition of new asphalt and concrete, and certain chemicals being placed on the roads, making these aggregates and particulate matter enter the air at faster rates. And not only are road dust and heavy metals entering the air faster, but the construction area is being robbed of its natural filters. So next time you’re out driving with the windows down, keep this in mind!

North Carolina is known for its beautiful landscape and abundance of trees and their accompanying foliage. It is a shame to watch them slowly disappear and be replaced by roads and new development. A new housing development is currently being built at the intersection of East Broad Street and Greenbriar Road, which used to be farmland. This development plan attributes residential land opportunities to the I-77 expansion, stating that “the travel time to Statesville will be reduced dramatically, opening up opportunities for residential development.”

Statesville is about to change forever.

A new family in my neighborhood shared with me that one of the main reasons they moved here was so they could be more immersed in the nature that now surrounds them, unlike in Cornelius where they previously resided. If we are not careful, we may ruin the beauty and productivity of the place we call home, and destroy the thing that once brought us here.

Cat Chapman is a student at Appalachian State University and is from Statesville.

There will be no shortage of ways to celebrate Independence Day in Iredell County in 2022.

SPD: Suspect in homicide turns himself in Friday night

The red, white, and blue was seen as far as the eye can see as hundreds lined up along Main Street in Troutman for the 18th annual Independenc…

Statesville was well represented this past weekend as Kayla Wright, the reigning Miss Statesville, and Carrie Rader, Statesville’s Outstanding…

When Tasha Smyre began taking part in the Statesville Neighborhood Spring Yard Contest, she just planned to make her yard look better. But it …

Alexander County celebration will feature On the Border concert, fireworks

The public is invited to the Alexander County Independence Celebration on July 16, which will feature a free concert at the new Alexander Coun…

Tourism drives $63 million into Statesville, but Cindy Sutton and the Statesville Convention & Visitors Bureau believe the city can bring …

UFO sightings: What in the world or out of the world is going on?

Cat rescued from burning home in Mooresville; animal is being treated

Mooresville firefighters rescued a cat from a burning home early Wednesday morning and performed lifesaving measures on the pet.

Unbelievable! This is the moment a cobra vomits up a massive PVC pipe

Unbelievable! This is the moment a cobra vomits up a massive PVC pipe

This car-bike hybrid could be the future of city travel

This car-bike hybrid could be the future of city travel

The landscape between Signal Hill Mall and Signal Hill Drive has changed due to the ongoing construction.

Traffic moves through the construction zone on East Broad Street.

The construction zone at the cloverleaf. 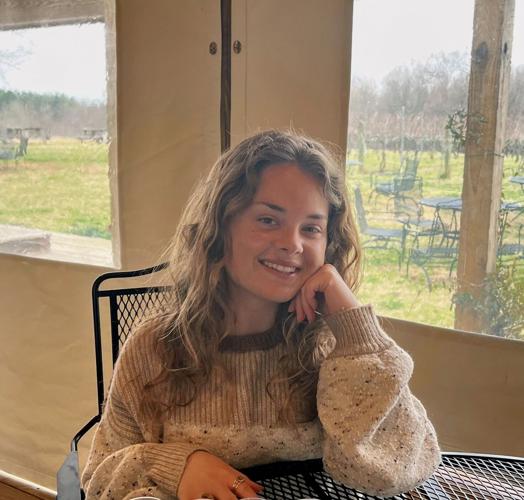