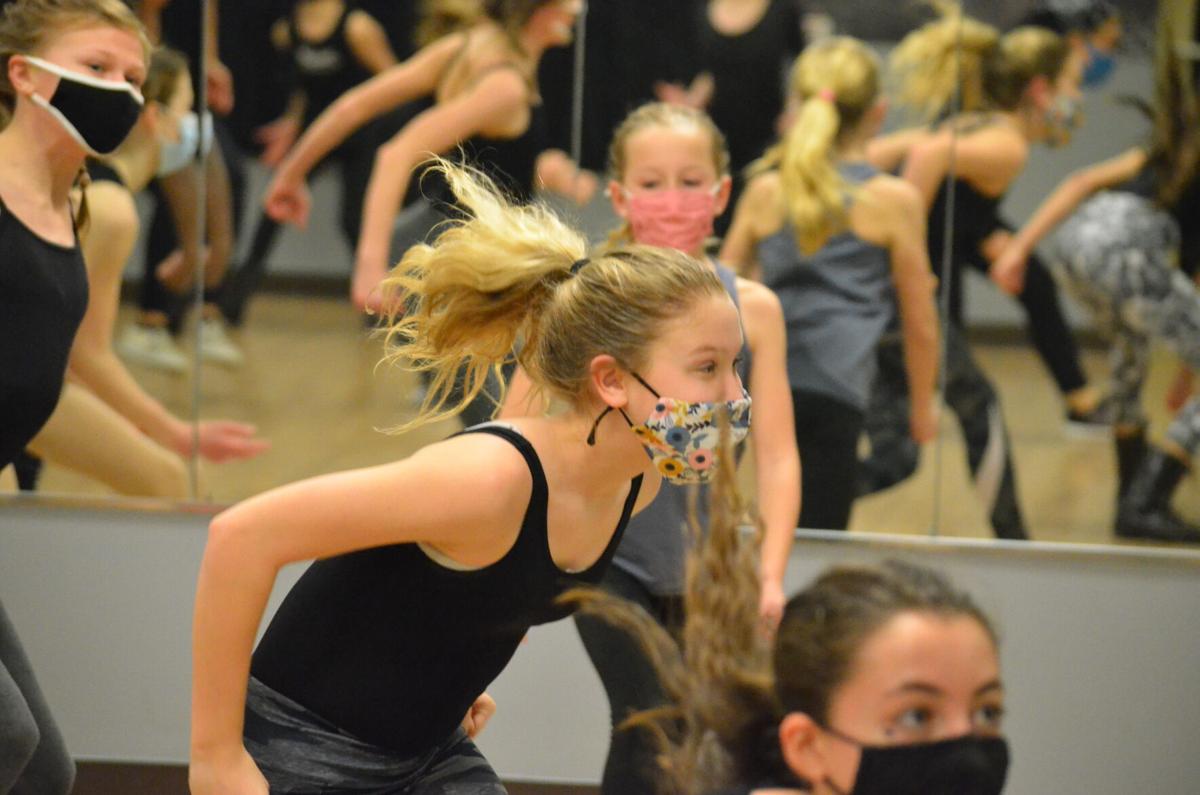 Students practice for an upcoming competition during a class at Statesville Dance in Statesville on Monday. 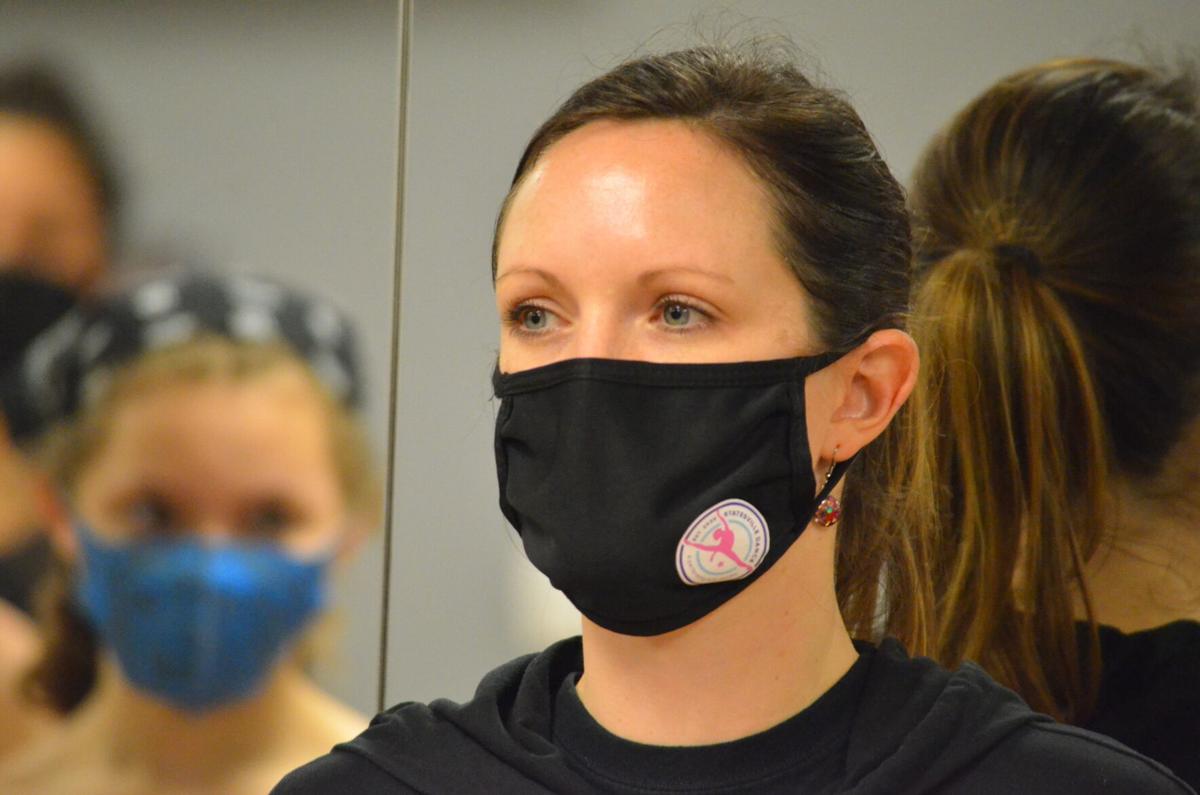 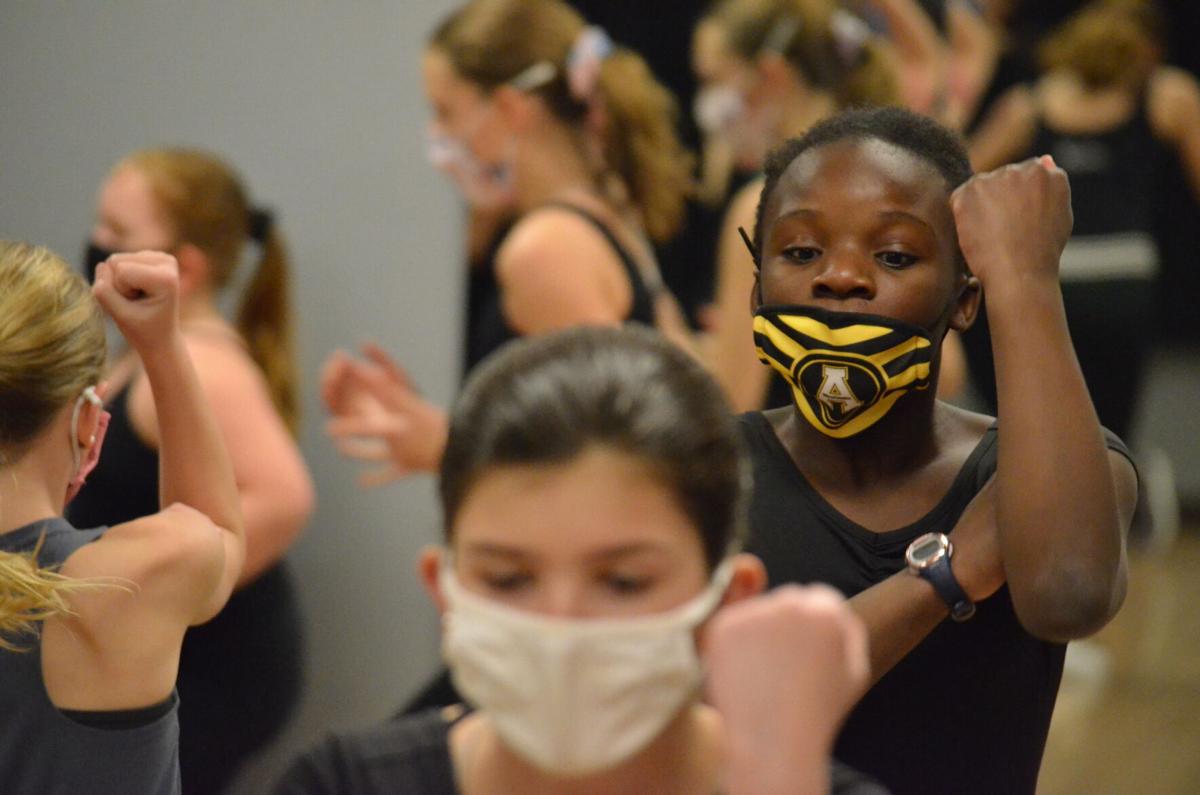 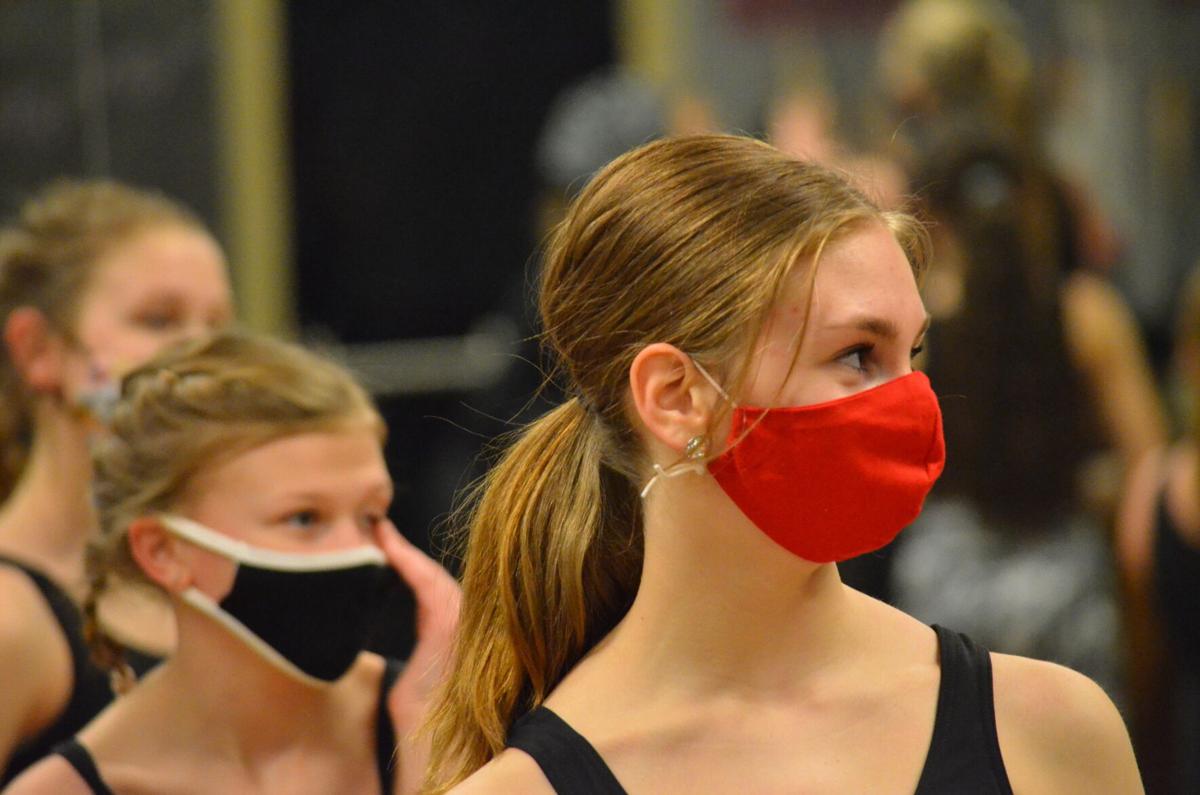 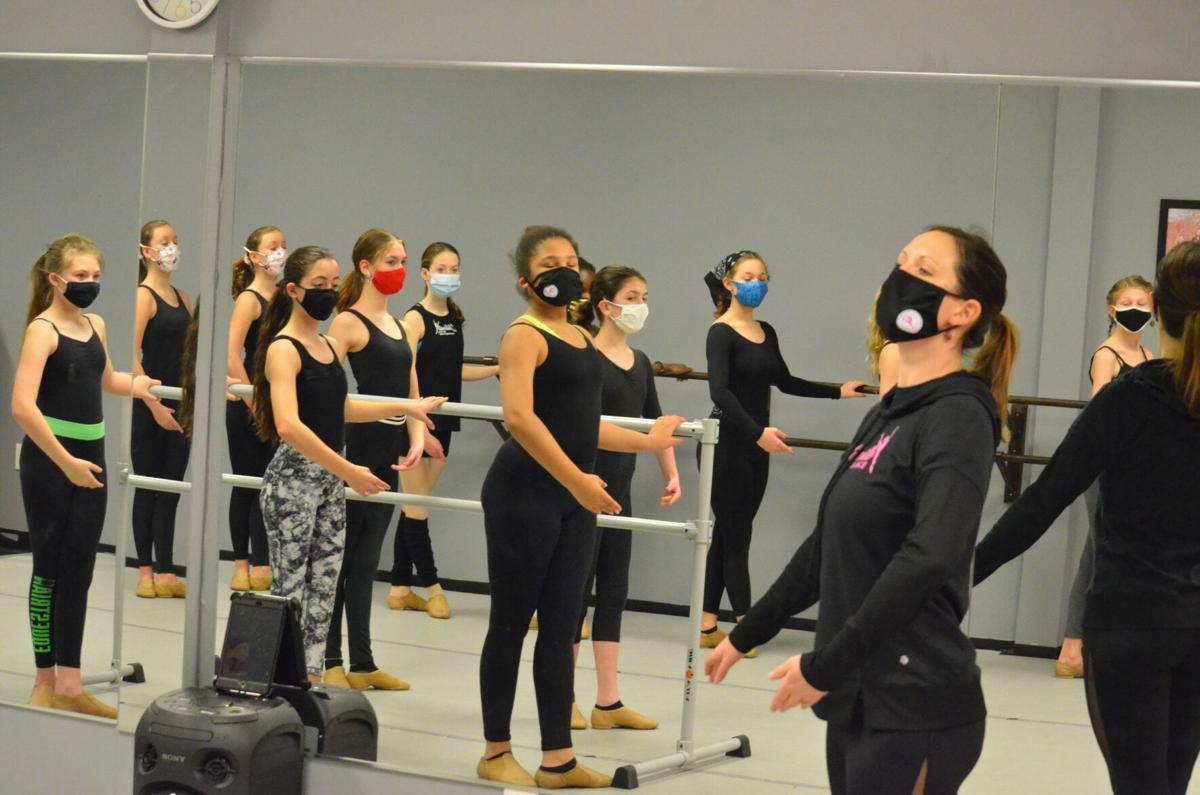 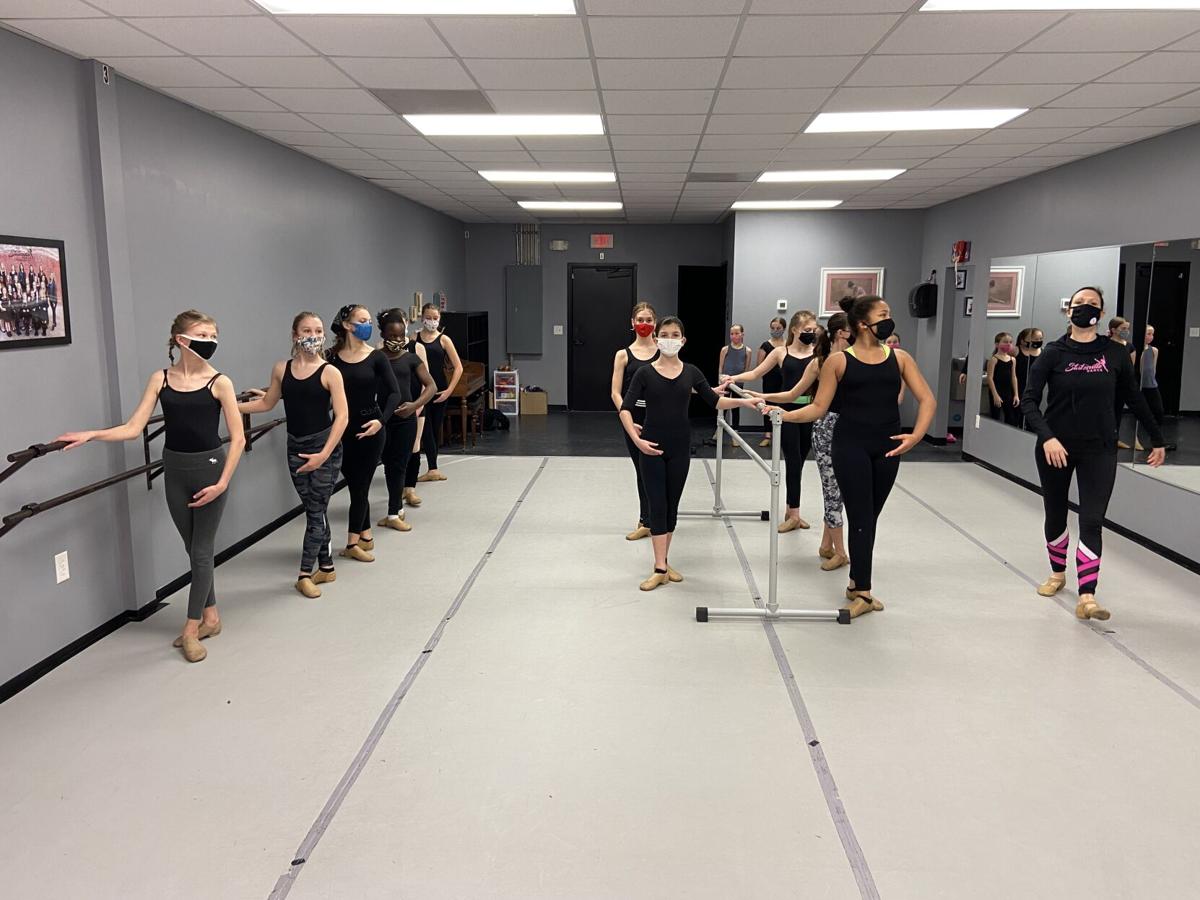 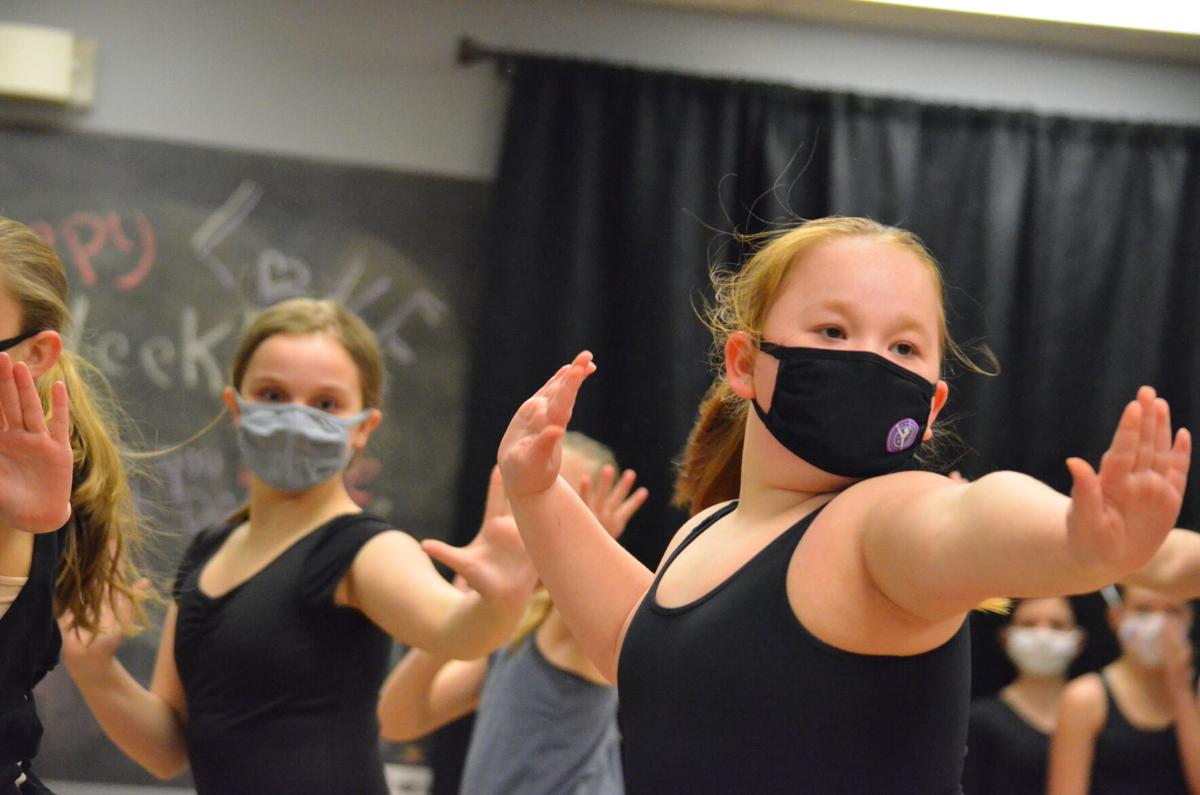 Being at home for months at a time isn't good for anyone, much less for many of the young children that make up many of the classes at Statesville Dance. For Laura Hanson, she said her studio provided a much-needed outlet for the dancers and other performing artists coming through her door.

"I think it's so important, especially going through that, it just gave children a chance to express themselves through movement, through all the creative outlets we have here," Hanson said. "Through the pandemic, just express all that emotion. It was hard on kids last year. They didn't understand it, they didn't know why they couldn't go to school or why they were being kept at home all the time or couldn't see their friends."

For Hanson though, she wasn't sure her students were going to have that outlet last March. When Hanson signed the lease for space that would become her studio, she knew challenges were ahead. Starting a business is never easy, but it got much harder for her when the pandemic was just starting to take hold in America.

"I signed the lease on this place in March, a week before the world ended, almost," Hanson said.

The dance teacher said a week later she looked at her husband and asked "What have we done?"

But after she asked that question, her husband simply said that they were in it now and they had to make it work.

"It was a lot of sleepless nights, but being hopeful too," Hanson said. "I tried not to worry so much about COVID, and be more like "What do have to do to get through this? What are our guidelines?"

Hanson said the time between signing the lease in March until her first students in June were used to prepare the space for dancing and other performing arts. "We just kept chugging forward hoping we would open," she said.

At first, Gov. Roy Cooper's executive order made that impossible, but once summer camps were allowed to operate, Hanson saw the opportunity to get back in business and back to doing what she loved.

"I always had in the back of my mind about opening up a studio. With COVID, I don't know, that hit, and I was already in the works of opening," Hanson said. "Back in 2020, it didn't seem like good timing, but actually it was."

Still, she was nervous as the precautions people took and the economic realities of a sagging economy made running a business harder. She wasn't sure if anyone would show up when they did open, as everyone was still figuring out what could and couldn't be done safely. But once the summer camps began, she said the camps were packed and they had to expand the number of sessions to make room for everyone who wanted to take part. She said that demand continued on into August once regular classes were allowed to resume.

For Hanson and fellow teacher Amanda Troutman, the most important thing Statesville Dance provides is an outlet in these trying times for those looking to express themselves and be around friends, if still socially distanced.

"For myself, it was seeing the kids, they had not had normalcy at all. But to see the kids' faces when they could come in here and move and dance and have some kind of freedom was the best thing," Hanson said. "We had the best time at summer camp because it hadn't been a normal year. These kids had an outlet and they loved it. We had so much fun with them."

While operating within the state's guidelines was tricky at times, Hanson said she understood the concern. From the hand sanitizer bought from the Southern Distilling Company to masks ready to give out to students who forget theirs, or marking the floor to remind students to space themselves, and temperature checks before students come in, it's been a matter of figuring out how to teach people to express themselves while minimizing risk.

Hanson is also quick to point out they aren't just a dance studio at Statesville Dance. Nor are the classes just for children.

"We're not just a dance studio. We're providing performing arts too. There really hasn't been anything like that in Statesville until this point where you can go and not just take dance, but take an acting class, learn how to sing, play music, I'm really trying to grow the performing arts side of it as well."

Hanson's road to opening up a dance studio in Statesville was one she couldn't have expected when she laced up her first pair of dancing shoes. Hanson grew up in Winchester, England, and said she has been dancing since she was 3 years old and, at 16, got a scholarship to the Elmhurst School for Dance, and trained at the Royal Ballet School in London.

That led to seven years dancing professionally until she met her husband, Eric Hanson, and eventually ended up in Statesville. She started teaching locally and said that's when the "bug" really hit her to teach full-time. She ran the program at the YMCA for several years before deciding to branch out on her own and open a dance studio.

And she wouldn't have expected to be as positive about the state of her business a year ago.

"I never thought I would have been in this position I am now, last March when I was running around panicking. You don't know how things are going to work, but you have to be hopeful."

She said that support from the name she made for herself teaching at the YMCA would have helped get the studio on solid footing in normal circumstances, but with the issues caused by COVID, it proved even more valuable as Statesville Dance opened its doors.

"The community, they've been so supportive. If they didn't trust their kids with us, we wouldn't be able to do this," Hanson said.

A 54-year-old Statesville man died after being struck by a vehicle on Old Mountain Road Thursday night.

After Tuesday’s 4-1 vote in favor of moving the Iredell County Confederate Memorial, the process of having the statue moved falls to County Ma…

William Peters of Statesville watched the numbers on his $5 scratch-off match up to a $250,000 top prize.

The Statesville Police Department is investigating a stabbing that occurred Thursday at a local motel.

The Iredell County Sheriff’s Office is searching for a woman who was last seen at a local hospital early today.

Resolution just the first step in statue's removal for its opponents

Todd Scott, like every Statesville NAACP president before him, asked the Iredell County Board of Commissioners and Statesville City Council to…

The following is a list of those booked at the Iredell County Detention Center on felony and driving while impaired charges from Feb. 25-March…

A wreck involving a tractor-trailer and at least two other vehicles has the southbound lanes of Interstate 77 closed between exits 42 and 36.

Students practice for an upcoming competition during a class at Statesville Dance in Statesville on Monday.