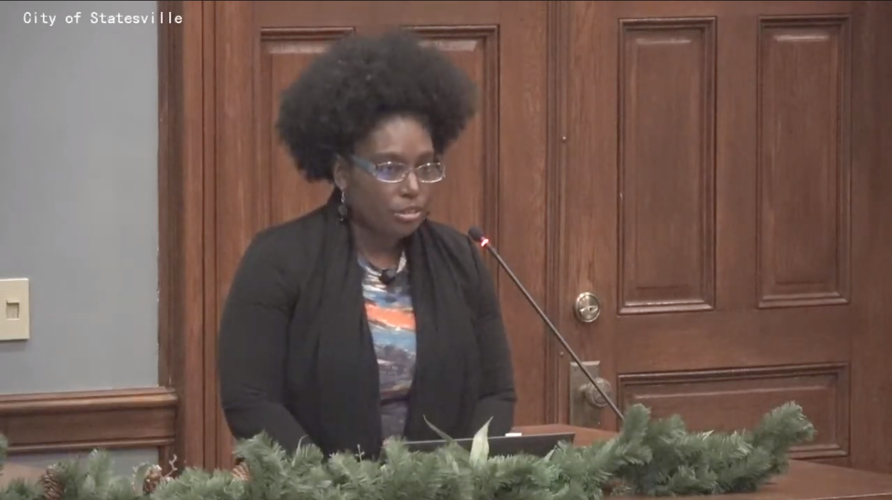 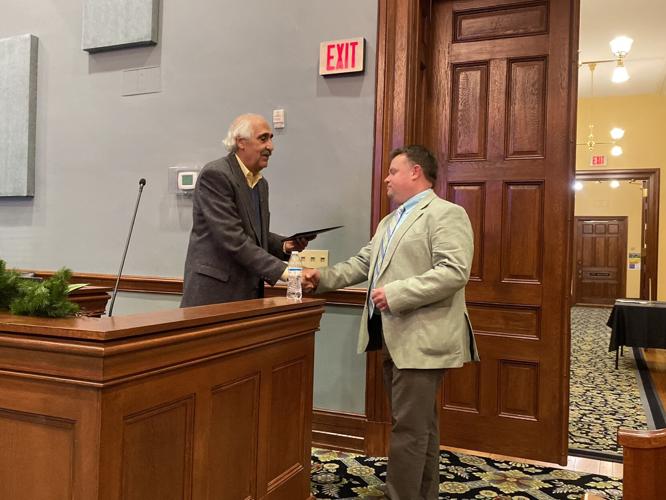 Mayor Costi Kutteh, left, shakes hands with Brian Roberts as he presents the finance department with the Distinguished Budget Presentation Award from the Government Finance Officers Association during a city council meeting on Monday in Statesville. 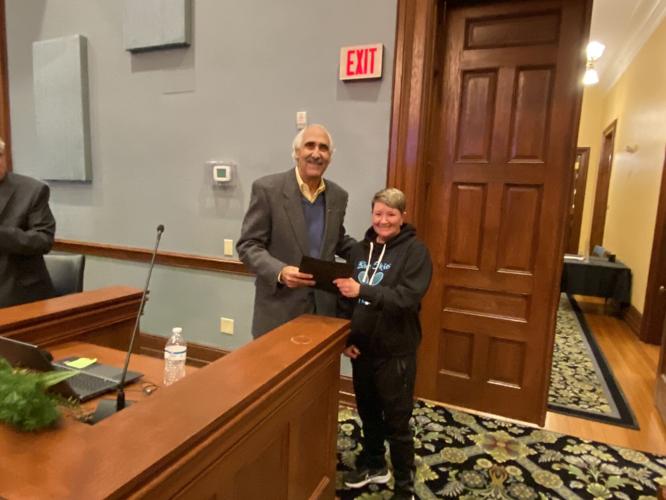 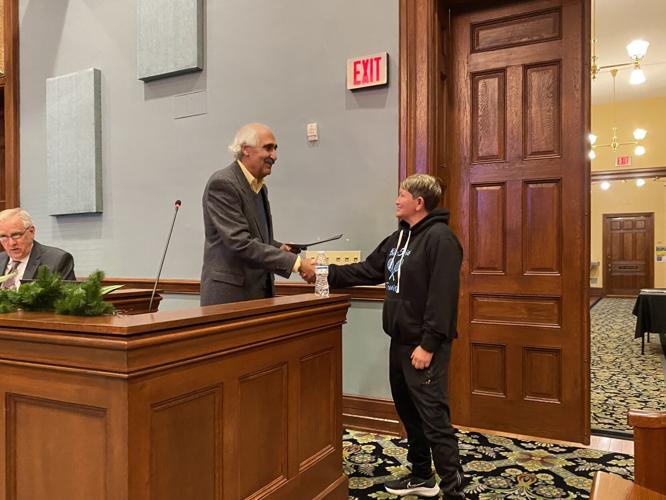 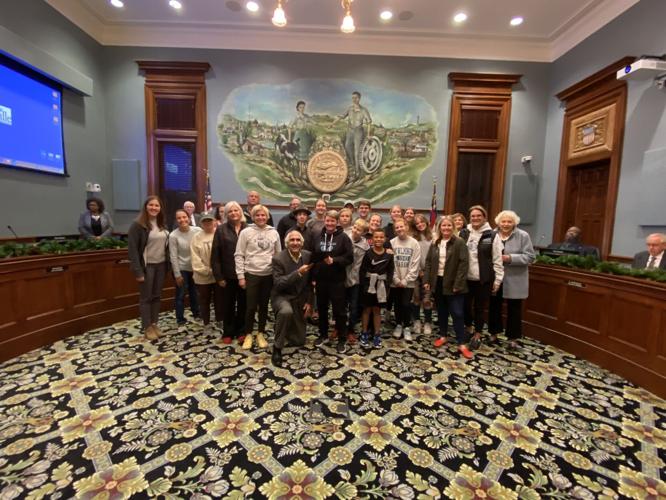 Mayor Costi Kutteh declared it Stacie Kennington Day in recognition of the tennis pro's recent awards during a city council meeting on Monday in Statesville. Kutteh and Kennington are pictured with her supporters.

The city will soon be looking for a new city resource coordinator, but whoever replaces Turkessia Brown-Evans will have big shoes to fill according to several council members.

The city’s community resource coordinator spoke as she is departing her position in December, but thanked the city for her time working there.

“I have learned, taught, challenged, been challenged, and experienced growth and successes. It’s been an honor to be here and serve the community and the city the two-and-a-half years I have been in this position,” Brown-Evans said.

She said she wanted to share the story of her grandfather, a brick mason and her learning of the difficulty of that process.

“I really just wanted to lay the brick, but I also realized that without a solid foundation, anything that I would try to build would not be effective,” Brown-Evans said. “I just extend to you the importance of you continuing through the strategic planning process, what the vision is for the city, so that those of us that are out here laying the bricks have a solid foundation from which to build from.”

Councilman Frederick Foster took a moment to thank Brown-Evans for her work, saying she went beyond what her job asked of her.

Travis Campbell spoke after Brown-Evans and noted that she had helped connect his organization, the Village Intervention Partnership, with a number of resources and served as a conduit between residents and the city’s government.

“We’re really going to need somebody in that community to keep everything afloat, and I just want to say thank you Turkessia for everything you’ve done.”

Councilwoman Doris Allison said Brown-Evans was vital to bringing more people to the table on a number of issues and asked the council put finding her replacement on its agenda going forward as a measure of accountability to ensure progress continues.

Finance department: The department received the Distinguished Budget Presentation Award from the Government Finance Officers Association. The GFOA award began in 1984 for state and local governments to prepare budget documents to encourage transparency in their budgeting process.

Unused alleyway closed: The city also held a public hearing to consider closing an unopened alley that runs from Charlotte Avenue to Wise Street. Originally part of a 1945 plat, it was never constructed or used and without its closure, the new Fire Station No. 1 couldn’t be built on its proposed site.

No one spoke, and the city voted 8-0 to close the alleyway that was never used.

Jane Sowers Road: The city accepted a pair of options as well as to get the public’s involvement as it does a feasibility study for an interchange on Jane Sowers Road. The two options, a diamond interchange or a flyover, would include a widening of Jane Sowers Road near the proposed interchange. It would be expanded into a four-lane roadway along with sidewalks and bike lanes. The motion passed 8-0.

Fleet agreement: The city approved a 15-vehicle, $735,000 fleet lease agreement with Enterprise Fleet Management over the next five years with a 5-3 vote.

Councilman Steve Johnson expressed concerns without knowing future city revenues and how, if needed, the city could get out of the deal. Councilwoman Kim Wasson said wanted to get a deeper look into what vehicles the city needs to replace and when before entering into the deal. C.O. Johnson also voted against the deal.

The following items were passed with a consent vote and considered routine by the city council.

Airport: Approved Parrish and Partners to provide design services for the construction of a new airport terminal building in the amount of $518,691.

Annexation: Approved a resolution for the city clerk to begin the process of the annexation of the Fulton BSH SVNC II LLC (Storage Sense Expansion) property, which is roughly 2.6 acres and at 1446 North Barkley Road. A public hearing on the matter is set for Dec. 5.

The city also moved forward with the same process for the Joseph Scott Duncan property, which is .273 acres and located at 128 Wallace Springs. The public hearing for that property is also set for Dec. 5.

Demolition: The city received a progress report on 522 Stockton St., which previously had been given a 60-day extension to give the owners more time to get the building up to code. As work has been done on the property, staff recommended not to demolish the home.

The demolition date was extended another 90 days.

Tomlin Mill One Stop to offer gas for $1.76 a gallon at customer appreciation event

Local 76® gas station will host a customer appreciation event on Wednesday from noon to 4 p.m. at the 1025 Tomlin Mill Road location in States…

Police: Report of sexual assault on a child leads to two arrests

A man has been charged with sexually assaulting a child and a woman faces charges for failing to report the abuse, the Statesville Police Depa…

Nine juveniles are facing charges after an altercation at Statesville High School on Friday.

It's been a long time coming, but with shovels in hand, Statesville broke ground on the site where Fire Station No. 1 will be built and named …

Statesville road closed one a month due to sinkhole

The city of Statesville Stormwater Division responded to a resident’s call regarding a 15-foot-deep sinkhole on the side of Earlwood Road. Cre…

Christmas parades In Iredell ready to march in the holiday season

Some Christmas traditions change over time, but the 2022 Statesville Christmas Parade organized by the 30th Masonic District of North Carolina…

When Theatre Statesville puts on its production of "Every Christmas Ever Told (And Then Some)" at the Iredell Arts Council on Thursday night, …

A Statesville man was critically wounded in a shooting on Thanksgiving Day.

The following persons registered for assumed names in the Iredell County Register of Deeds office from Nov. 13-19.

Behind the Headlines: Investigating the Catholic Diocese of Buffalo

AIDS in Kenya: Homabay County, where fish are traded for sex

AIDS in Kenya: Homabay County, where fish are traded for sex

Mayor Costi Kutteh, left, shakes hands with Brian Roberts as he presents the finance department with the Distinguished Budget Presentation Award from the Government Finance Officers Association during a city council meeting on Monday in Statesville.

Mayor Costi Kutteh declared it Stacie Kennington Day in recognition of the tennis pro's recent awards during a city council meeting on Monday in Statesville. Kutteh and Kennington are pictured with her supporters.