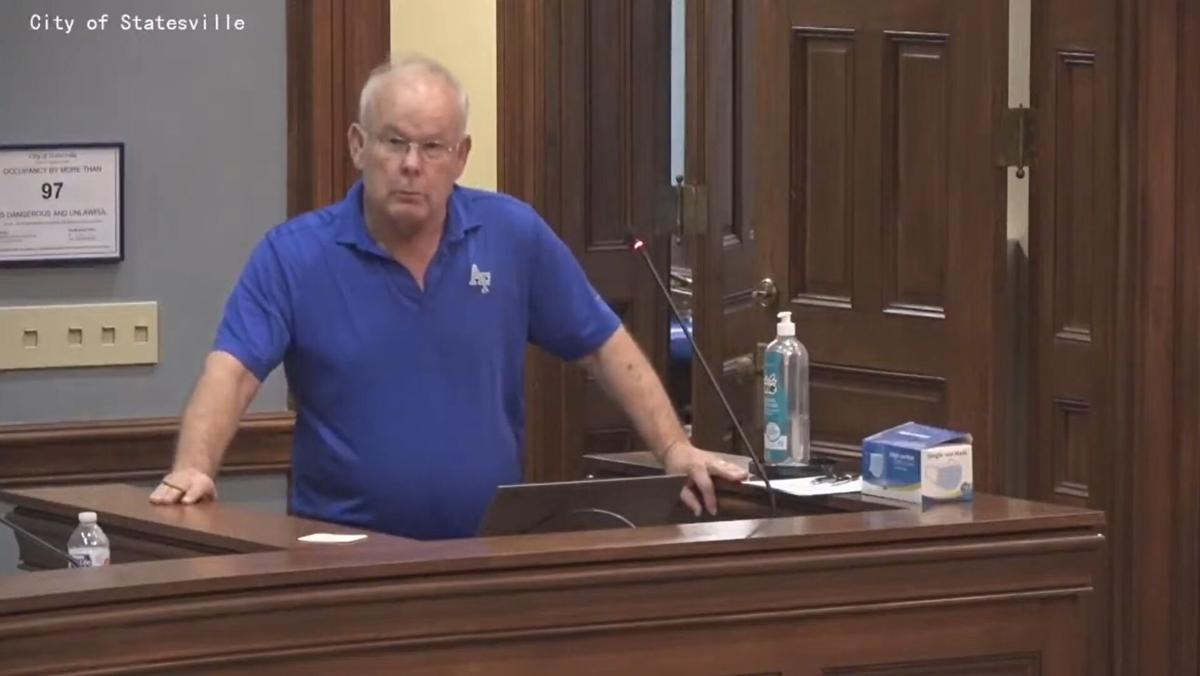 Sam McDowell speaks to the city council during the public comment portion of the meeting Monday. 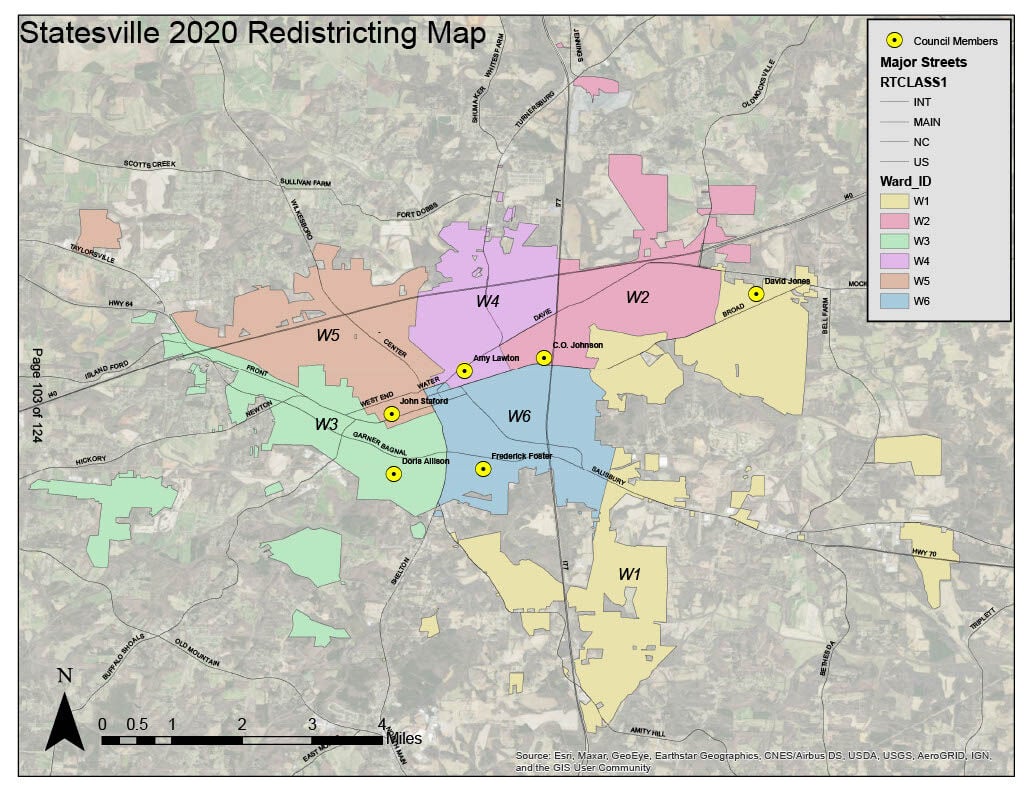 Redistricting Plan 1.2 proposed by the city to redistrict the city's political boundaries after the 2020 census.

The city of Statesville went forward with its ward redistricting plan on Monday night, setting in motion the process of approving the redrawing of the city’s political boundaries.

A public hearing is scheduled for Nov. 1 to consider the adoption of the redistricting plan. If approved then, by Nov. 12 it would be submitted to the Iredell County Board of Elections. The primary election is set for March 8, 2022, and the general for April 26, 2022.

Statesville’s population is 28,419, according to the 2020 census data, then “adjusted” to 28,432 after several annexations by the city. With that, the ideal ward population for the new voting districts would be 4,739 for the six districts.

The redistricting is needed as the growth from the 2010 census has some current wards with double-digit percentage differences in population from that ideal population. The more southern wards of Ward 3 and Ward 6 are up by more than 14.7% and 13.5% respectively. Ward 2 increased by more than 12%. On the other side, Wards 1 (-3.6%) Ward 4 (-7.4%), and Ward 5 (-8.4%) would be overrepresented without redistricting.

The goal is to get wards within 5% of the ideal population while complying with other considerations, including the requirement of minority-majority districts to comply with a 1985 court order that declared Statesville violated Section 2 of the Voting Rights Act of 1965. That mandates that electoral district lines cannot be drawn to “improperly dilute minorities’ voting power.” For Statesville, that means two of the city’s six wards are designed to contain a Black majority voting-age population. Currently, Ward 3 and Ward 6 are minority-majority.

According to Planning Director Sherry Ashley’s presentation of Redistricting Plan 1.2, the redrawn map would get the wards within that 5% difference from the ideal population while keeping Ward 3 and Ward 6 as minority-majority, with 51.84% and 50.6% Black populations.

The proposed new redistricting would see an eastward shift in the boundaries, with Ward 1, Ward 2 and Ward 6 seeing the most major shifts.

Mayor Costi Kutteh said the council mostly agreed it was the best option available. Council member Doris Allison made the first motion to approve while Frederick Foster seconded it. It was approved unanimously.

The city council mulled how to handle a county request to extend the city’s sewer line, hoping not to lose too much control while serving Jennings Park. The project will require a sewer main extension approximately two miles in length beneath I-77 and along Fifth Creek, which corresponds with a future sewer extension in the city’s sewer master plan.

The county had requested that the city extend its sewer to serve Jennings Park, at 141 Deitz Road, to accommodate a planned park expansion. The city would extend a 16-inch gravity sewer line at the intersection of Jennings Road and U.S. 21, near the entrance to the Manheim Auto Auction facility. The cost would be roughly $500,000 to upsize the sewer line to 16-inches, but more work was needed to get an exact number, according to Scott Harrell, Statesville’s assistant city manager infrastructure and development. While that large of a line wouldn’t be needed to serve only the park, the council and Harrell said it wanted to consider it as there could be developed there in the years to come.

The city approved the request to serve the park, unanimously, but with a few caveats, including a municipal growth overlay near the U.S. 21 intersection, which would be based on agreed standards between the city and the county, as well as any properties that would want to access the sewer line would agree to be annexed by the city. Jennings Park would be annexed officially after a county project that uses state funds was completed.

In the debate, council member Steve Johnson said that if the city did move forward, it would make sure to have the county consult with it in regards to zoning and development changes, stating the city should be careful to get its return on investment for the project. Council member William Morgan said he was also concerned about cost recovery and said he preferred a plan where the city had more control.

Previously the council and city awarded a construction contract for the I-77 rest area sewer line and elected to upsize the line to provide capacity for additional customers. It was completed and put into service in 2018. In August of this year, the city began the process of considering adding the area to the city’s municipal extraterritorial planning jurisdiction or annexing the park. The county did not wish to agree to the city gaining extraterritorial planning jurisdiction of the area.

Sam McDowell said he was returning to speak to the city council three years since his last visit, but his concerns were the same: traffic on Sherwood Lane.

McDowell said the road is often used as a shortcut between Davie Avenue and Iredell Memorial Hospital. He estimated that a third of the traffic that comes down Sherwood either violates the speed limit or other traffic rules. He said results from previous traffic studies confirmed that the speed limit was often ignored by drivers. He said he previously asked for traffic calming devices.

“I’d like for you to reconsider, something in your plan, for traffic calming on Sherwood Lane,” McDowell said.

Foster asked Police Chief Addison to consider enforcement there, but noted the speed humps aren’t always a remedy, saying it can be difficult for fire trucks to drive over them.

Lisa Moser asked for the city to consider retaining walls and sidewalks on Falls Street and other neighborhoods in that area of Statesville.

“He was an honorable man, and served under many presidents, he served his country well,” Scott said.

Scott noted Powell’s leadership style and said he sent out prayers to his family at this time.

The first reading of a request on Secor Street to revert from conditional business use to high-density single-family. It is owned by Chadwick E. Stewart, who said it could be divided into several lots for homes. The planning board voted against rezoning 3-2. Ashely said the current land development plan pegged it as better for mixed-use due to surrounding properties, which she noted we’re trending more toward commercial or industrial.

However, the council saw it differently.

Allison said she had spoken to the developer and spoke out in favor of it, noting it would provide much-needed homes in the area. She made a motion to approve and Foster seconded the motion. Stafford agreed, noting he didn’t see how well it could be converted for commercial use.

A zoning request from Ted Raye for the property at 951 Park Drive with the request going from high-density single-family residential/manufactured housing District to B-1 (neighborhood service) District. The request for a change in zoning from residential to commercial use for the property would permit the existing structure, formerly housing the Faith Child Development Center, to be used as a barbershop.

The planning board recommended approval and the city council unanimously.

The city accepted the donation of 2.019 acres at the end of Berkshire Drive which will be used as a future public right of way extension.

It also approved the expenditure of $334,083 to cover the cost of the east corporate apron at the Statesville Regional Airport.

The following is a list of those booked at the Iredell County Detention Center on felony and driving while impaired charges from Nov. 24-Dec. …

Santa didn't need Rudolph's red nose, but he did need a red fire truck to carry him down the streets of Harmony for its annual Christmas parade.

After a year's absence, Statesville Christmas Parade will again march down Center Street

First responders, from law enforcement to firefighters to paramedics, will be honored when Statesville’s Christmas parade marches down Center …

The race is on: Local politicians flock to Board of Elections to file for next year's election

As Rep. Jeff McNeely approached the doors of the Iredell County Board of Elections, the look on Sen. Vickie Sawyer’s face told him all he need…

I’m glad I’m not, and was not, in the fields of cotton. I am, however, acquainted with the plant and the products made from it, but, thank the…

Downtown Statesville was a Christmas wonderland Friday as the shop and stroll included horse-drawn carriage rides, Victorian carolers and tour…

Marching bands, cars, both vintage and current, and, of course, Santa Claus were some of the highlights of the annual Troutman Christmas Parad…

A bolt of lightning in 2005 brought Chestnut Grove Baptist Church and the Cool Springs Fire Department together after it struck the church’s steeple.

Sam McDowell speaks to the city council during the public comment portion of the meeting Monday.

Redistricting Plan 1.2 proposed by the city to redistrict the city's political boundaries after the 2020 census.