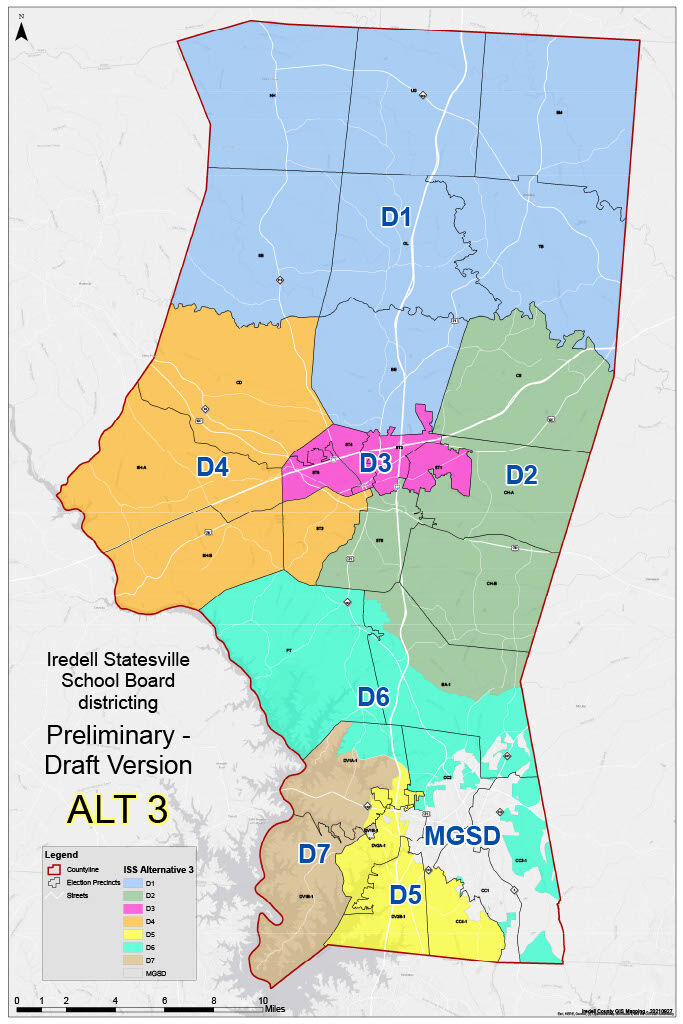 The map that the Iredell-Statesville Schools Board of Education approved. 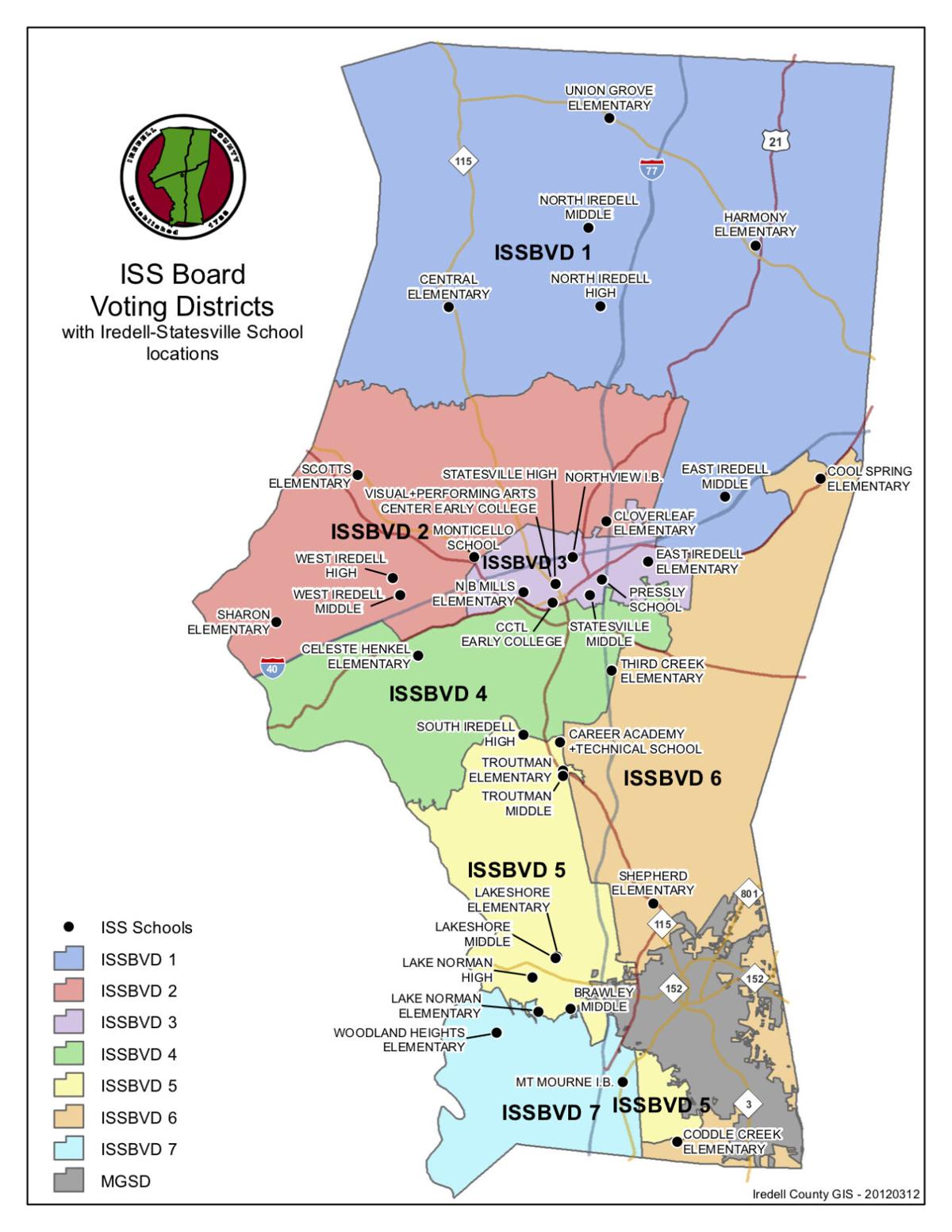 A map showing the current districts for Iredell-Statesville Schools.

“I personally will vote against it, simply because I think we could have done a little better,” Page said. “I know we’re under a time crunch, but that’s just the way it goes.”

Board member Bill Howell agreed and felt some community’s voting precincts were separating but said he favored Alternative 2. Page said he was pleased with the options on the table, but said he felt it could be done slightly better to avoid the population deviations in the southern part of the county.

The school system had previously said in its presentation that the Alternative 3 map prioritizes precinct integrity, splitting only two voting precincts and essentially sandwiches (Mooresville Graded Schools) between two precincts and keeps North Iredell together. The map does have Statesville split into three districts, but leaves one intact, District 3, from the current map. One other downside is it doesn’t avoid putting some of the more southern districts into a lower range of population deviations, meaning Districts 6 and 7 ended up with slightly higher populations.

The need for redistricting came after the 2020 census showed more than 5% population change in several districts. Five of the seven districts were outside of that range, with one deviating by over 27% from the ideal population, which would divide the population as evenly as possibly between districts. Iredell County saw a 14% increase in its overall population since the 2010 census. The law allows a 5% difference in either direction as one of the goals in drawing new maps is to keep voting precincts together instead of splitting them for the sake of creating perfectly even districts.

The board had eliminated Alternative 1 in a previous meeting.

While the agenda item for redistricting was addressed quickly Monday night, most of the debate over it had happened earlier in the month.

At the Oct. 4 meeting, Page said to start the meeting that he wished to make clear these were voting districts, not where students would go to school. He said he was “shocked and disappointed” by the low turnout from the public. In comparison to the packed room and dozens of people outside during recent public hearings on mask mandates, there appeared to only be a handful of people in the room who weren’t part of the school system. Only two people spoke from the public.

One of the speakers, Jay Sherrill, said the way the districts are drawn was very partisan in his mind, saying most favored Republican candidates. He said he preferred the Alterative 2 options, as it at least created one district within 3% of either party. He said the rest, going off previous elections, where at least leaning Republican by 6%, but most were by 30% Republican.

He said he hoped for a return of nonpartisan elections.

Adam Mitchell, one of the school system’s redistricting consultants, said the maps were drawn without consideration of party affiliations of voters.

Howell said that the delayed census date had forced the board and public to hurry up the process, something he wishes was possible to address.

“I’m a Republican, but I believe in what’s fair,” Howell said.

Carver said he preferred Alternative 3, as it helped preserve Statesville, and noted that it would prevent potentially four board members coming from south of Troutman in the county.

“I know people from Mooresville will say that’s where a lot of the population is at, but I just don’t know if that’s really in the best interest of the whole county,” Carver said. “Anyway you do it, more representation is coming from the south end of the county, but with Alt 3, I like it preserves that Statesville district.”

While Page had asked for some small adjustments to the maps to be made, the board ultimately felt there wasn’t enough time to do that and present the maps to the public again before this Monday’s meeting.

To see a comparison of the current map with the proposed alternatives, go to https://bit.ly/3DFtIl3.

A man who called for help for a stab wound ended up being tasered and arrested after authorities said he threatened first responders.

The following is a list of those booked at the Iredell County Detention Center on felony and driving while impaired charges from Sept. 30-Oct.…

The Iredell-Statesville Board of Education approved Adam Steele as the next chief financial officer for I-SS.

The map that the Iredell-Statesville Schools Board of Education approved.

A map showing the current districts for Iredell-Statesville Schools.