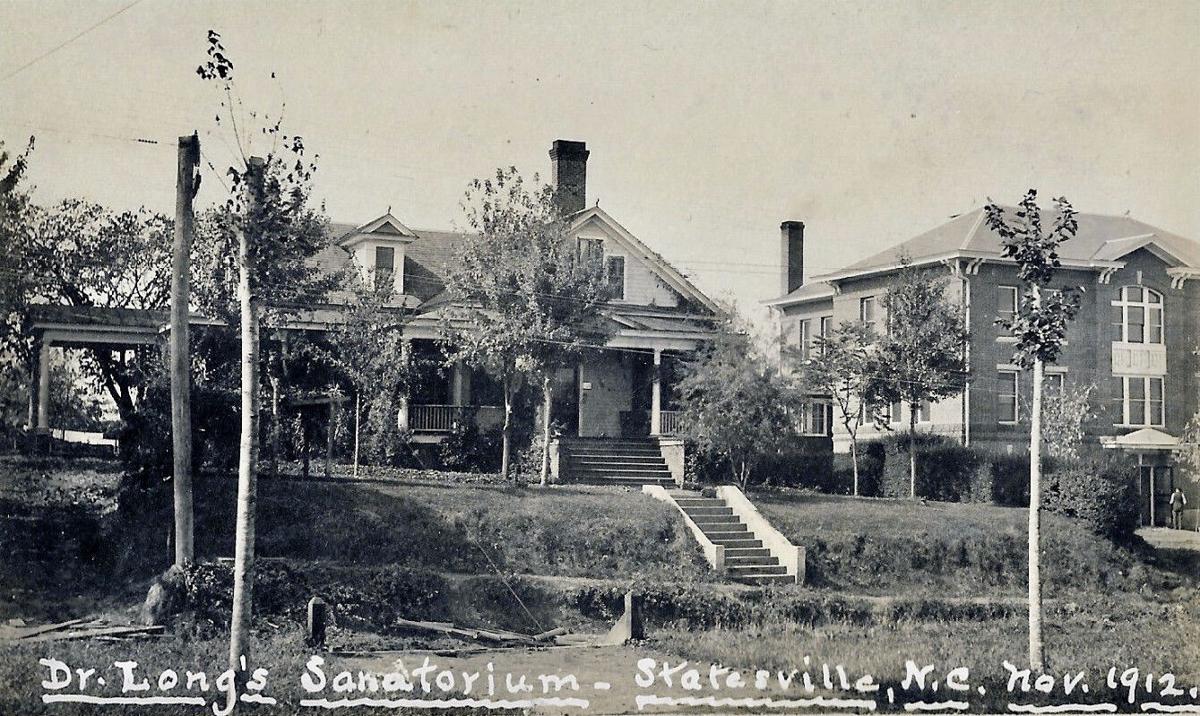 The Long’s Sanatorium on North Center Street is shown. The building was seriously damaged by fire 100 years ago. 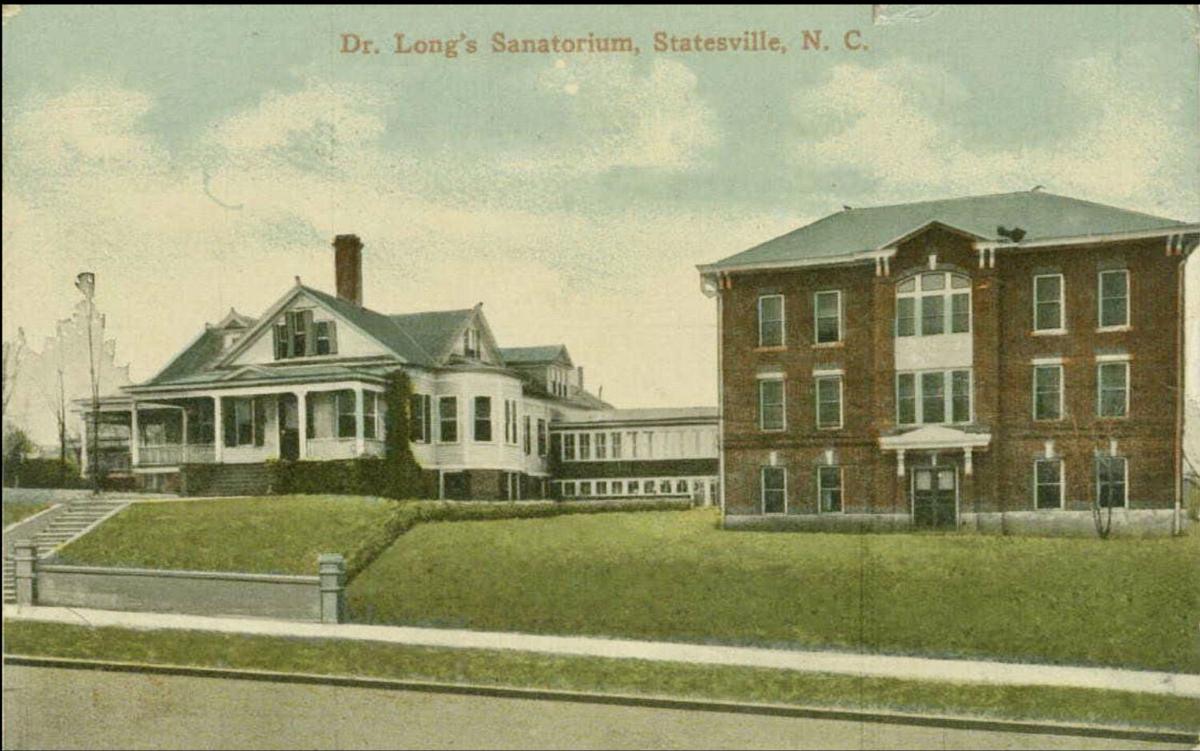 Long’s Sanatorium was on North Center Street and it was damaged by fire 100 years ago.

“Carl Patterson is the winner of the free fishing boat given away by Adams Sporting Goods as the climax of the firm’s annual boat show which ended Sunday. Patterson won a 14-foot MFG Challenger fishing boat with live well.” (3/1)

Pollution problems. “Dr. J.H. Nicholson, county health director, reported that sanitarians have been checking various locations in the county where garbage has been dumped. He showed commissioners a map pinpointing some 85 major refuse piles, and added there are many smaller dumps.” (3/2)

“Options on land to be used for construction of a West Iredell High School will be sought. The Iredell County School Board told Superintendent Tom Poston to begin a search for possible sites.” (3/3)

SIHS beats N. Rowan 71-68 in North Piedmont Conference tournament title game. “North quickly trimmed the lead to 66-64. Bouncing Billy Ellis sealed the victory with a bucket with :27 to go and a pair of charity tosses with ten seconds to go.” (3/4)

SHP Sgt. B.L. Walker on Iredell’s 103 days w/o a traffic fatality. “‘The new District Court system, stricter patrol enforcement, improved public attitude and the opening of I-40 and I-77 segments have all contributed to produce safer highway driving in Iredell County.’” (3/5)

“Sgt. John H. Douglas recently received his honorable discharge from the United States Army after serving as a Military Policeman for the past two years. He and Mrs. Douglas are at present visiting in the county with their parents.” (3/1)

Former POW praises Red Cross. “I wish to thank you for what you did for me while I was in service. It helped out where other organizations failed to go. From a guy who spent a year in a German Prison Camp I say the Red Cross is tops. Sincerely yours, Carl Benge” (3/2)

Left Germany for home Jan. 25. “Staff Sergeant Jack P. Waugh was one of the fortunate soldiers who left this former Luftwaffe Air Depot at Erding in super deluxe box cars which had been furnished with stoves, bunks, windows, fuel and drinking facilities.” (3/4)

“Ensign Pearse LeBaron Mathewson was released to inactive duty on March 1, after serving in the Navy for three and a half years. Mathewson served on the USS Patrol Craft 483. He received the American Defense and Atlantic-Pacific ribbons.” (3/5)

S/Sgt. Jake Troutman discharged, 32 mos. in Army. “He spent 10 months in New Guinea and the Philippines. He holds the Asiatic-Pacific ribbon with four battle stars, the American theatre ribbon, Philippine liberation ribbon with one star and good conduct medal.” (3/7)

“Flu continues to victimize local people, striking at random, with its customary lack of warning. The number of flu cases does not equal the epidemic of December and January, but a lot of the people who had flu then are sick now.” (3/1)

“Preston Steele last night showed the Kiwanis Club motion pictures in technicolor he made while serving over two years in the Pacific as a Major in the U.S. Army Engineers. Most of the pictures were scenes at Port Moresby, Buna, Lae, and some in Australia at Sydney and Brisbane.” (3/2)

“John Gilbert, president of the Chamber of Commerce, received official confirmation of the allotment of 20 family dwelling units to this area. ‘In response to your application for aid in providing veterans housing, an allocation of 20 units has been tentatively approved.” (3/4)

“County commissioners authorized County Agent Maury Gaston to purchase a D7 caterpillar equipped with bulldozer from the War Asset Corporation to be used by the Iredell County Terracing Association. The cost of the tractor is $5,411.00.” (3/5)

“Mr. and Mrs. C.O Guy who have been living in Charleston returned to the county and are making their home on Statesville, Route 6. Mr. Guy has been employed at the Navy Yard at Charleston.” (3/6)

Eva Katherine Teague & Gaither Mahaffey married March 1. “The bride graduated at Central High School in 1940. The bridegroom is a veteran of the U.S. Army, having served four years in the Pacific theater of occupations.” (3/7)

“Fire Tuesday morning about 9 o’clock destroyed an old barn on the premises of John Sherrill on Walker avenue. The fire company responded to the call and a long string of automobiles followed.” (3/3)

Letter to the Editor from James E. Tharpe. “Sitting on my porch on West Front street I have counted the number of cars that pass per hour and find there is an average of 180 per hour during the day and many of these pass at the rate of 25 to 35 miles per hour. Now how long is this to continue? Till some precious little child is killed? In the last six months nearly a dozen accidents have occurred at the intersection of Mulberry and Front streets and the wonder is no one yet has been killed.” (3/3)

“Fire Thursday afternoon seriously damaged Long’s Sanatorium, on north Center street. About 5 o’clock fire was discovered in the roof of the institution’s frame building, in that section of the roof nearest the kitchen flue. The damaged building was at one time the main hospital building. Since the new brick building was constructed the frame building has been used as the nurses’ home. No patients were quartered in the damaged building.” (3/7)

“Mr. J.M. Deaton, who recently bought the Morrison building on the corner of Meeting and West Broad street, has had a proposition made to him to convert the property into a fifty-room hotel. The matter will definitely be decided about the middle of the month.” (3/7)

“We devoutly hope that Statesville will not pass through another summer without some method of sprinkling the street and we begin the agitation thus early in order that ways and means of laying the dust may be devised by the time the season opens. Let’s have the streets sprinkled by some method.”

“At a meeting of the board of aldermen yesterday, a petition was presented asking that the sale of second-hand clothing in Statesville be prohibited. The petition was referred to the committee on health.”

“Since Dr. Woods recovery from his recent illness he preaches with his old time power and force. The subject of his Sunday morning discourse was ‘Paths of Righteousness’. It was a clear and strong presentation of the truth.”

“Dr. C.A. Turner and Messrs. Hal Cowles, Willie Lowenstein and Sol. Clarke, members of the Statesville orchestra, went to Charlotte yesterday to play, in connection with a Charlotte orchestra, in a rendition of Pinafore, which was given in that town last night and is to be repeated to-night.”

“The measles are still blooming at Mr. L.C. Caldwell’s. Two more of his children are down with it.”

The following is a list of those booked at the Iredell County Detention Center on felony and driving while impaired charges from April 8-14. L…

A Statesville man died Saturday in an ATV accident in Alexander County.

A Statesville man has been charged in connection with a fatal hit-and-run in March.

The city of Statesville is taking over a piece of property on Fifth Street after Superior Court Judge Richard L. Doughton ruled in a civil nui…

The Town of Mooresville, after having their motion for dismissal denied Monday, is once again being held in civil contempt of court for failin…

'GOD PUT IT ON MY HEART': Dan Scott determined to continue daughter's legacy

A barbecue dinner will be held to raise funds for the family of a man shot to death last week.

“It is a privilege to render you your first salute.”

The Long’s Sanatorium on North Center Street is shown. The building was seriously damaged by fire 100 years ago.

Long’s Sanatorium was on North Center Street and it was damaged by fire 100 years ago.