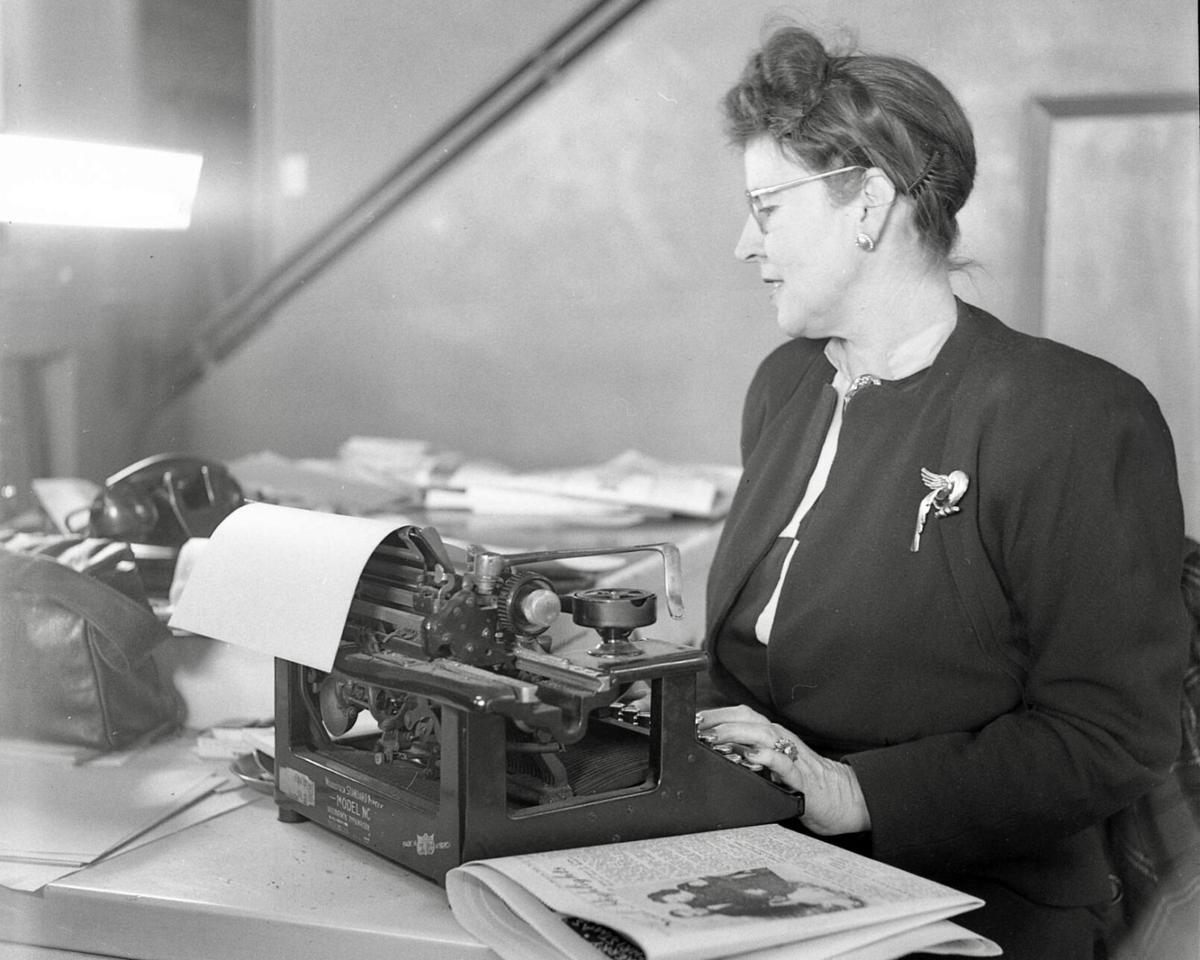 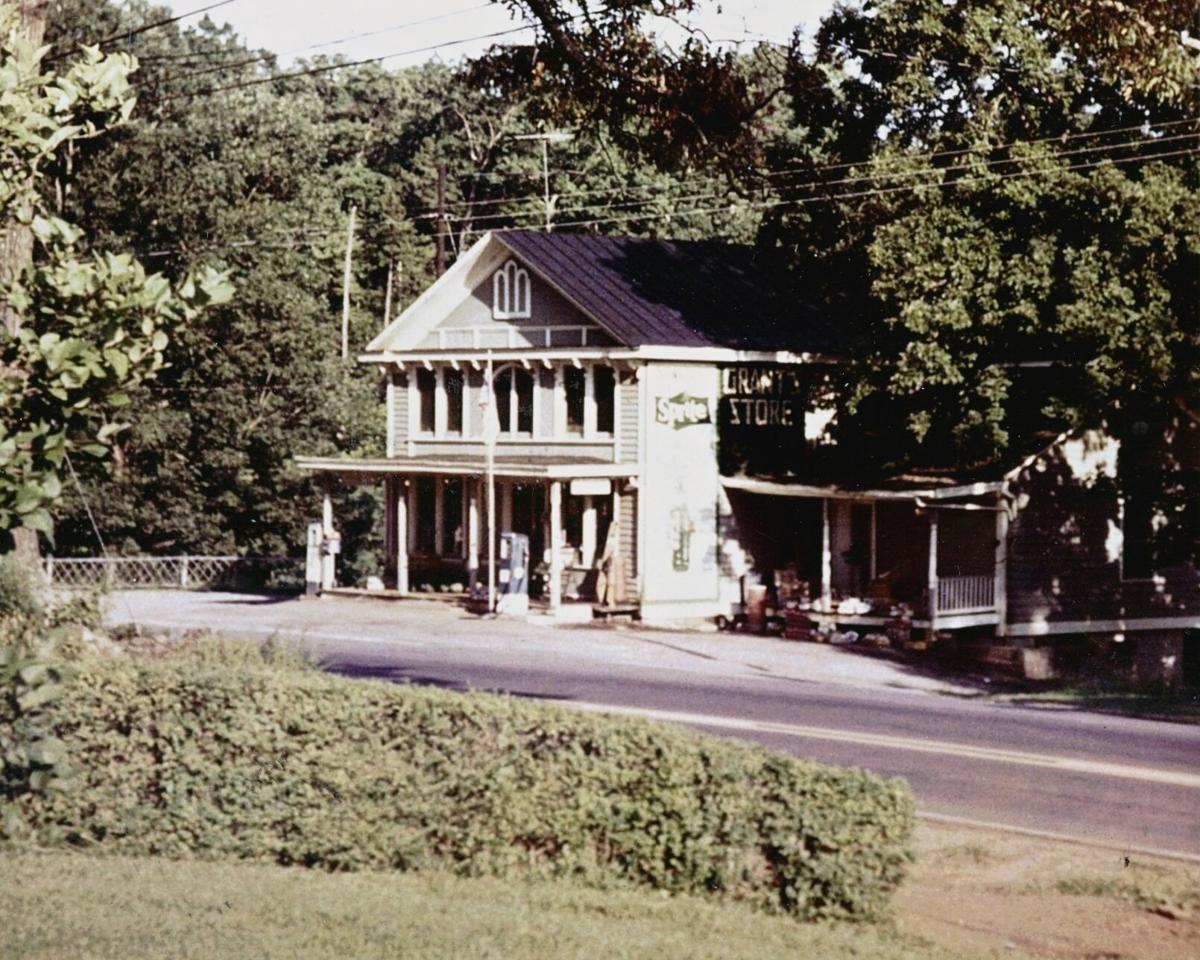 Grant’s Store was in Turnersburg. 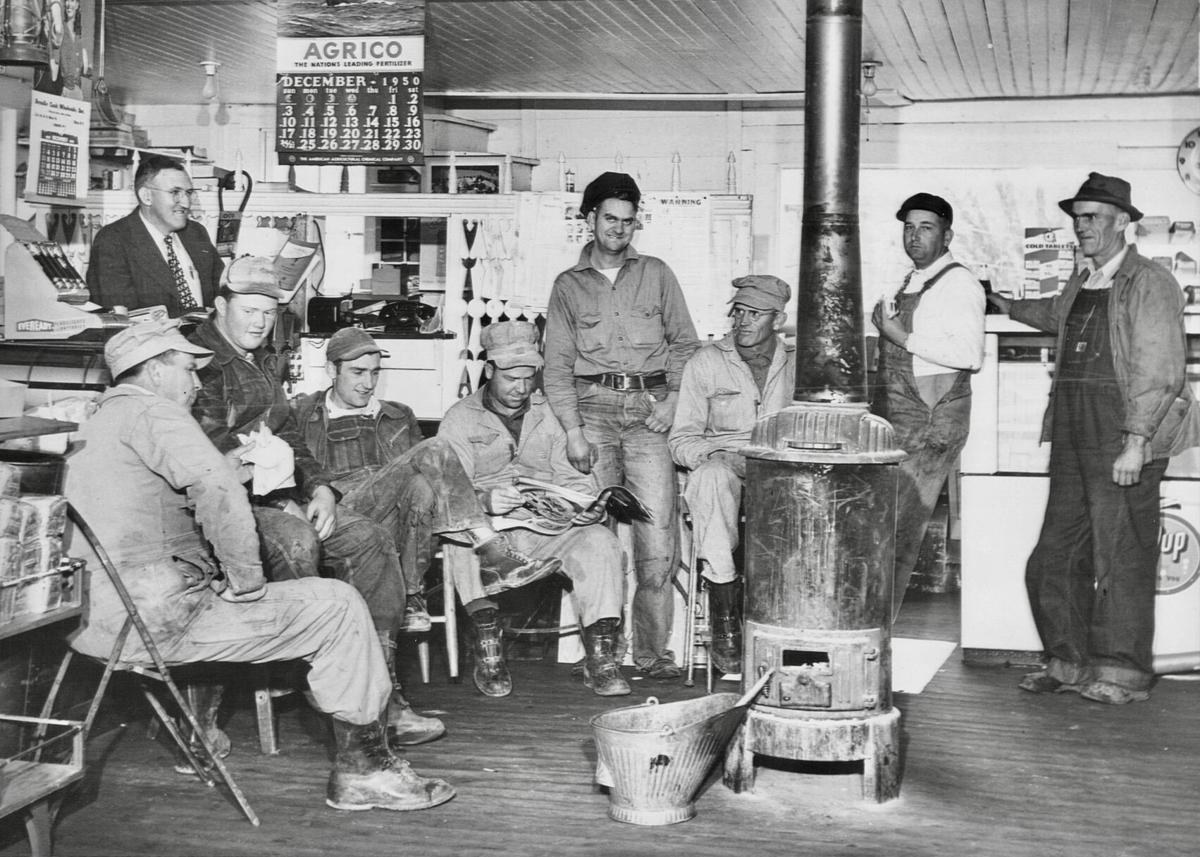 Men are gathered around the stove at Grant's Store in Turnersburg. 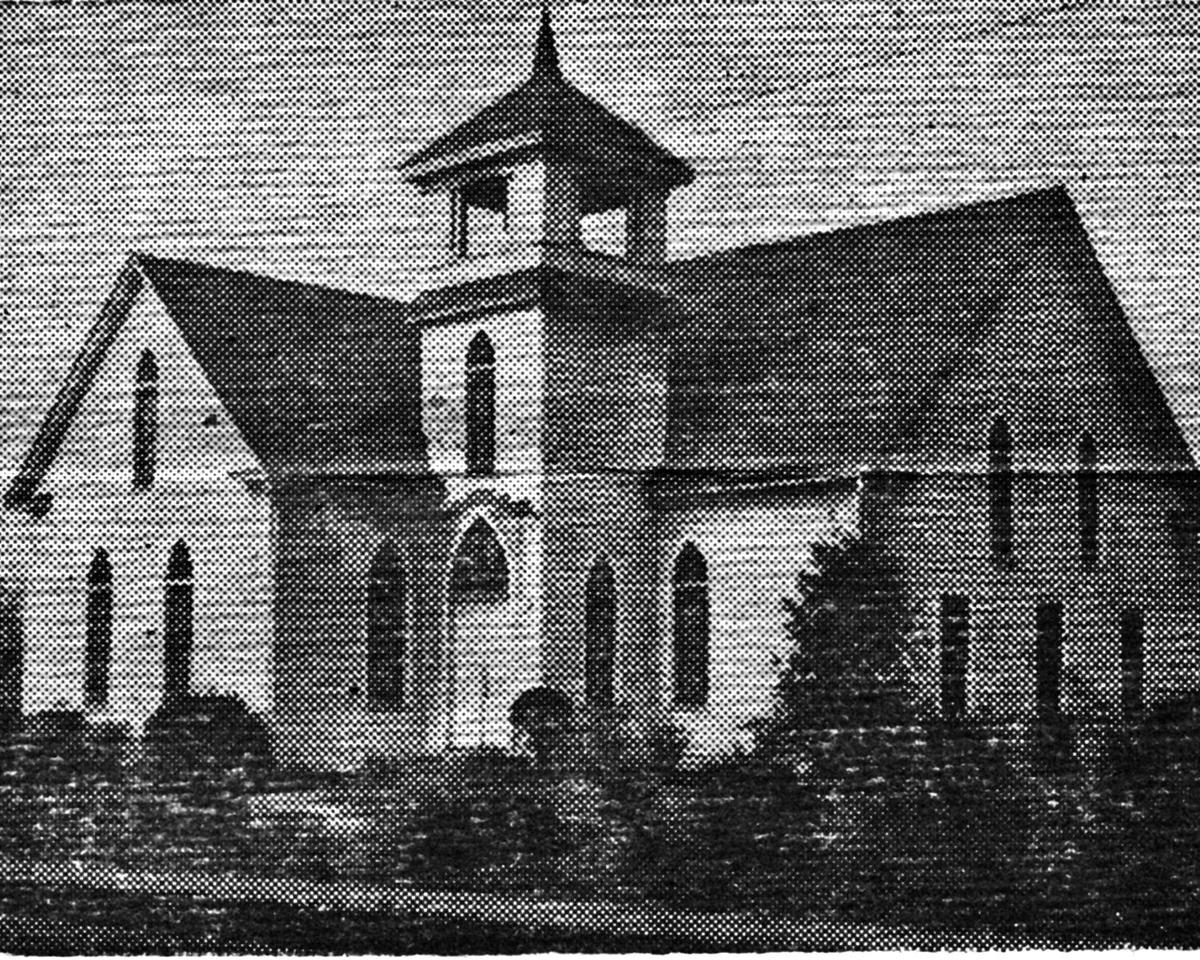 Obit Joe Cephus Brewer, Jr., 48. “He was a veteran of World War II, a member of the Veterans of Foreign Wars, American Legion, and the Iredell Wildlife club. He was a foreman with Technical Furniture Co. Mr. Brewer was a member of Front Street Baptist Church.” (4/26)

“George M. Grant, postmaster at Turnersburg, was honored by the National Weather Service for his 15 years as a weather observer. Grant received a service pin for his operation of a rainfall reporting station used in the flood forecast program.” (4/29)

Dr. Paul Kearns talks airport improvement to City of Progress Kiwanis Club. “‘If we are going to attract business here, let us remember that the first thing many businessmen see as they enter Statesville is the Airport, and it is the last thing they see’.” (4/30)

Albert G. Mullis, SC 3/c, in Oakland. “He served for 25 months in the Navy and was aboard the U.S.S. Muliphen. He was in the invasion of Iwo Jima and Okinawa and was assigned duty in Tokyo the first of October and later to the hospital ship U.S.S. Bountiful.” (4/26)

Ross E. Fox received Oak Leaf Cluster to Bronze Star awarded for actions in France July 11, 1944. “The medical detachment suffered the loss of its medical officers and his assistants. Fox took charge of caring for the wounded. Under constant fire, he gave aid to the wounded and carried them to a place of cover until he could safely evacuate them.” (4/27)

1st Lt. Charles F. Patterson posthumously gets Distinguished Flying Cross & Air Medal with Oak Leaf Clusters for piloting more than 100 missions over North Burma. “He has with eagerness and vigor attacked enemy installations of material and troop concentration, inflicting severe damage on these was well as bridges, airdrome and communication facilities.” (4/29)

J.B. (Bub) Shaver and Bill Shaver home. “The brothers left for overseas duty about the same time. They met in England twice, in France once and three times in Germany. Both received their discharges in April and both held the rank of Technician 5.” (5/1)

“Members of the Front Street Presbyterian church are reminded of the supper tonight at the church hut at 7:30 o’clock. The supper will honor returned servicemen of the church.” (5/2)

“R. Melvin Luther, veteran of two years service with the Navy and very talented sign painter, has resigned his job with the Coca Cola company and opened a sign painting shop in the basement of his home.” (4/26)

Mooresville HS 15 Statesville HS 1. “Star of the day was pitcher Freeze who curveballed the Hounds to death, striking out eleven while his team-mates were hitting everything two Statesville hurlers could throw.” (4/27)

“Mrs. Catherine L. Mallory has returned to the Statesville Daily Record after several months leave of absence and has assumed the position of society editor. During the war period she served as advertising manager, in which post she did outstanding work.” (4/29)

“The county agent has bad news for many 4-H club youngsters. There may be no homing pigeons to put in those cages they’ve already built. The government announces that is has around 300,000 orders for pigeons and only about 20,000 birds on hand.” (4/30)

Dr. Wallace Hoffmann heading local fund drive for Jewish refugees. “Quota for this section is $4,500. Homeless, hungry and still suffering from the aftermath of war, these Jewish survivors of the Nazi purge are in desperate need of elementary essentials.” (5/1)

Rogers-Winters Co. opens for business. “Although the building is not entirely complete due to scarcity of glass for front windows, it is modern in every respect and is a splendid addition to the development of the city.” (5/2)

“Dr. J.H. McClellan, who held the rank of captain in the Medical corps and had charge of a hospital in Bialystok, Poland, during the war has arrived from New York, where he landed on April 19. Dr. McClellan sailed on the steamship Canada. After the armistice Dr. McClellan served in the Polish army for three months.” (4/28)

“Mr. Pearl S. West has completed three houses recently and has filled them with renters. Mr. West has set a pace for others for taking care of the housing proposition. He has not done much talking, it is observed, but has acted. There are doubtless many more in Statesville who can do just what Mr. West has done and thereby aid in supplying the houses so badly needed.” (4/28)

“Those at work on the hotel proposition have advanced to the point where success seems assured. A little more help will make the proposition entirely a certainty and it is hoped this will be forthcoming and that work may be started soon.” (5/2)

Harmony. “This section was visited by a very heavy rain and electric storm Wednesday afternoon, doing much damage to uplands by washing and flooding lowlands. 1921 bids fair to go down in history as a phenomenal year.” (5/2)

Shepherd’s. “The base-ball teams of Kannapolis and Shepherd’s played a very interesting game Saturday afternoon, the score being 23 to 0 in favor of Shepherd’s.” (5/2)

“Col. H.C. Cowles is mad because The Landmark said his Federal Court room was little and stuffy. He says there is not a nicer or better-ventilated court room in the State.” (4/28)

“Messrs. Barron & Nicholson, who sell all sorts of vehicles, have introduced the rubber-tired buggy in Statesville, Dr. H.F. Long being the first purchaser. The vehicle is noiseless, doesn’t jar like the steel tire and is easier on the vehicle, the horse and the driver.” (4/28)

“The circus was with us Saturday and it had a very good crowd. The general opinion seems to be that it was a good show for the money. The balloon ascension was a failure.

The balloon burst while being inflated” (4/28)

“The Frying Pan Club had their annual outing at Cooper’s-on-the-Catawba Wednesday. There was a pretty good company, they had plenty of fish, plenty to eat and drink, and spent an enjoyable day. So far as we are advised they were all able to get home without assistance.” (5/1)

“Mrs. H.T. Carlton sent The Landmark Wednesday the largest lemon we ever saw. It was grown by her and weighed 13 ounces. Three grew in a cluster, two of them weighing 24 ¼ ounces. Mrs. Carlton’s lemon tree was grown from the original stock in possession of her mother, who obtained it when a girl in Salem 60 years ago, and the tree is still bearing fruit. Mrs. Carlton’s tree is now full of bloom with lemons of all sizes.” (5/1)

Grant’s Store was in Turnersburg.

Men are gathered around the stove at Grant's Store in Turnersburg. 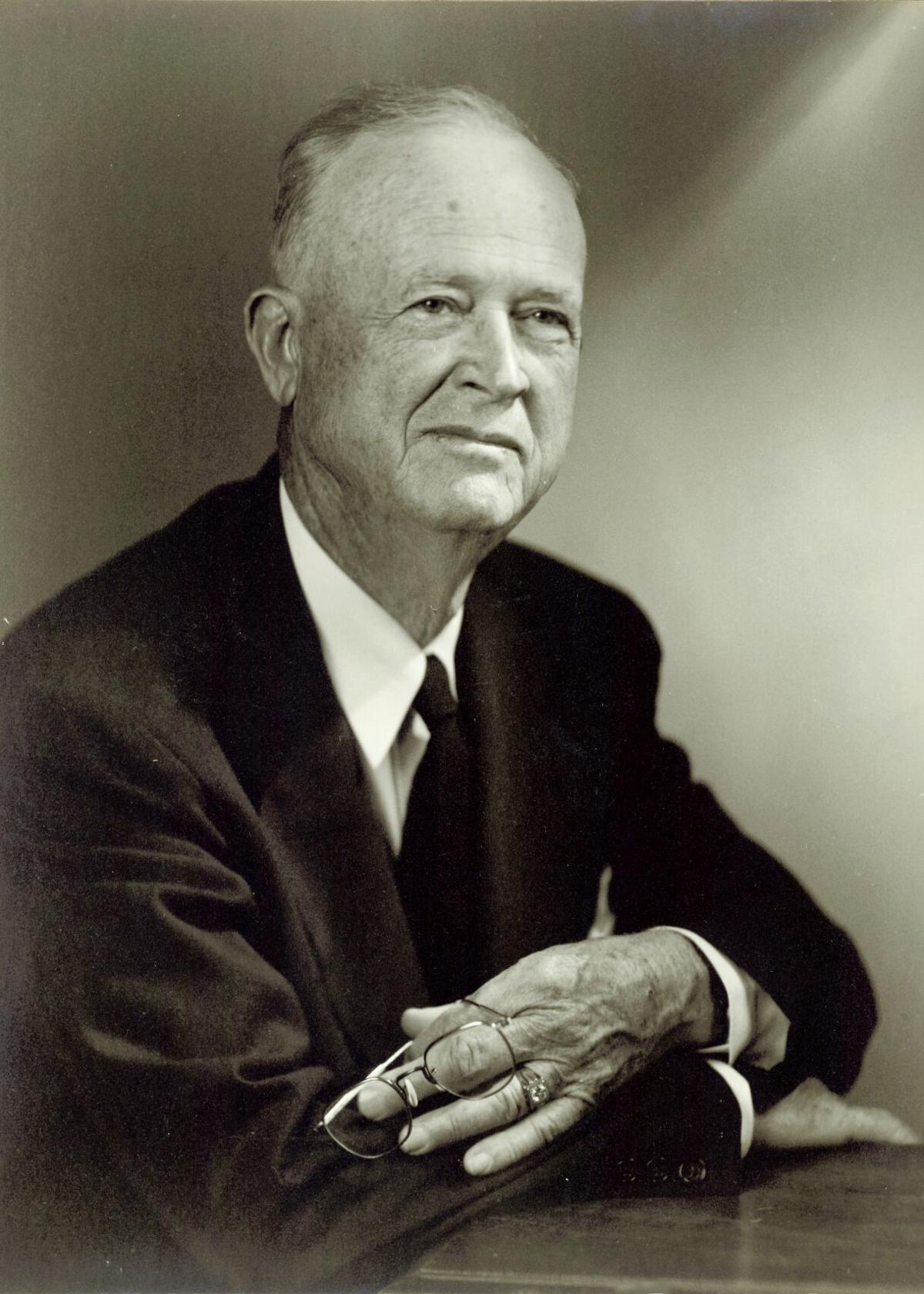 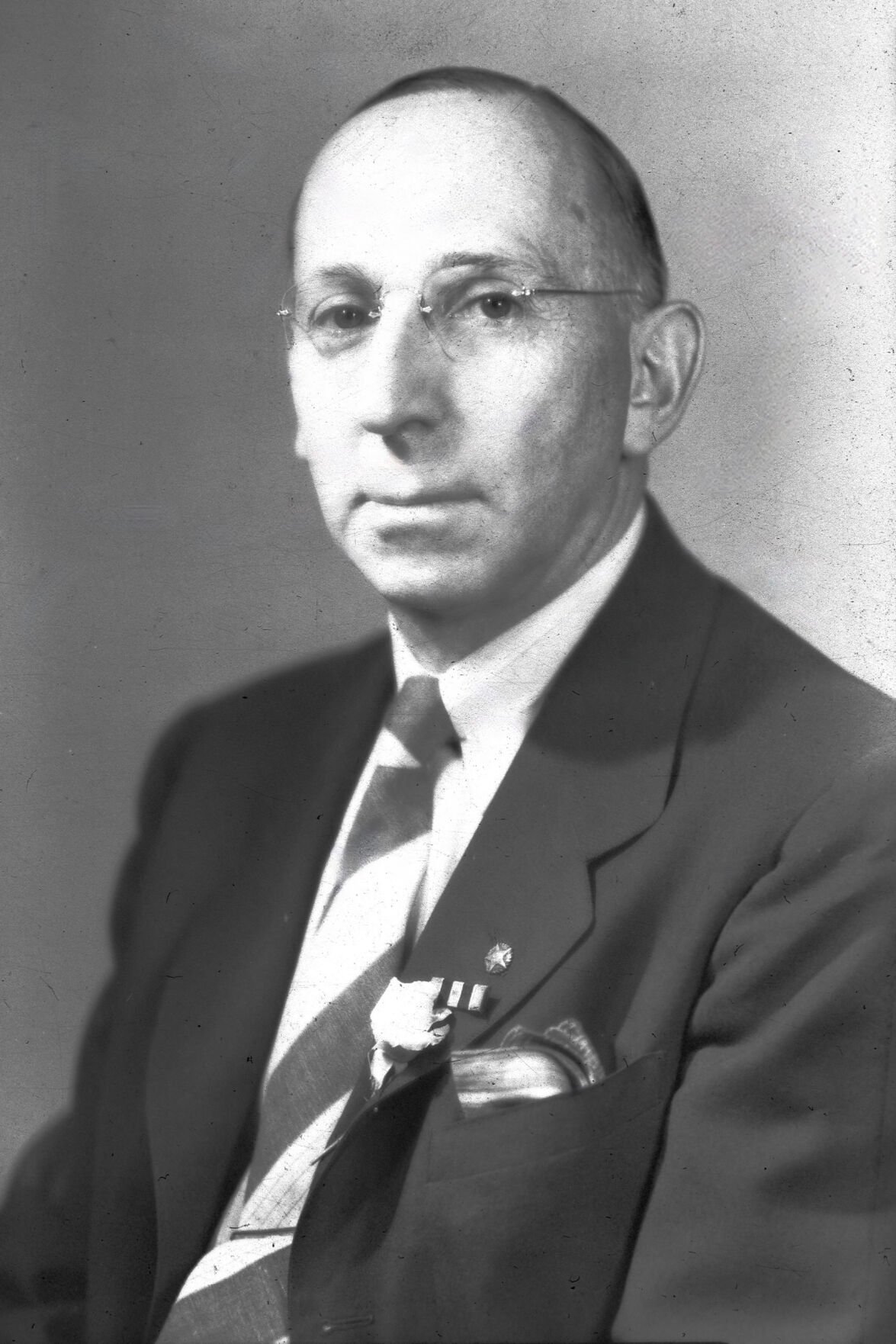