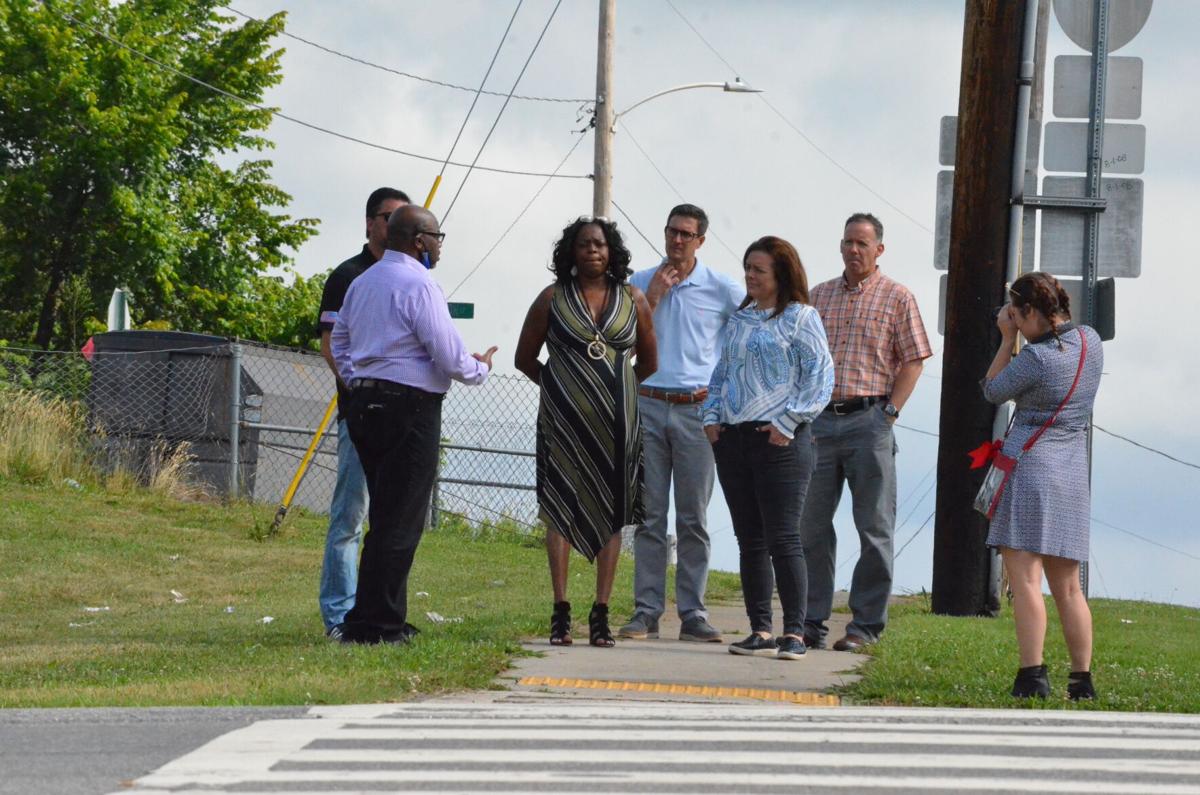 Brian Summers of the Sidewalk Institute, left, speaks to local leaders about the need for improvements to crosswalks on Garner Bagnal Boulevard in Statesville on Friday. Pictured from left are John Gallina, Kim Wasson, Ron Smith, Vickie Sawyer, and Scott Harrell. 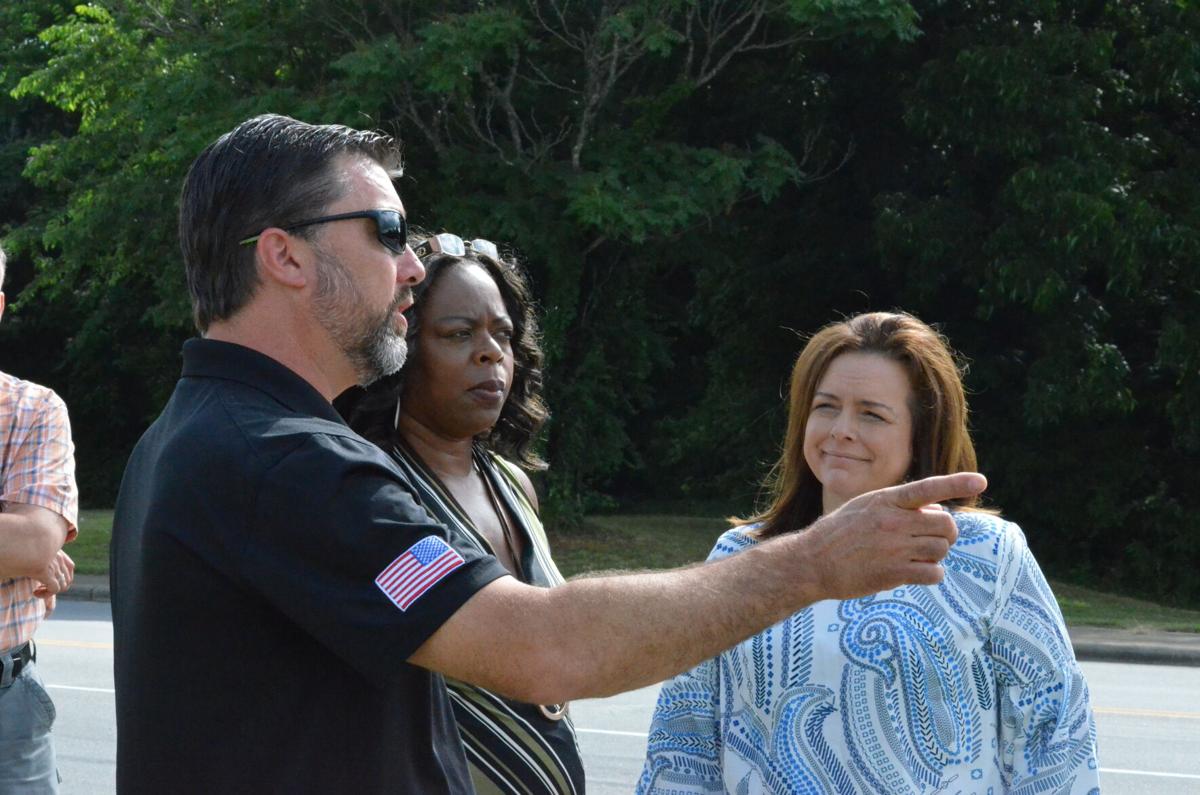 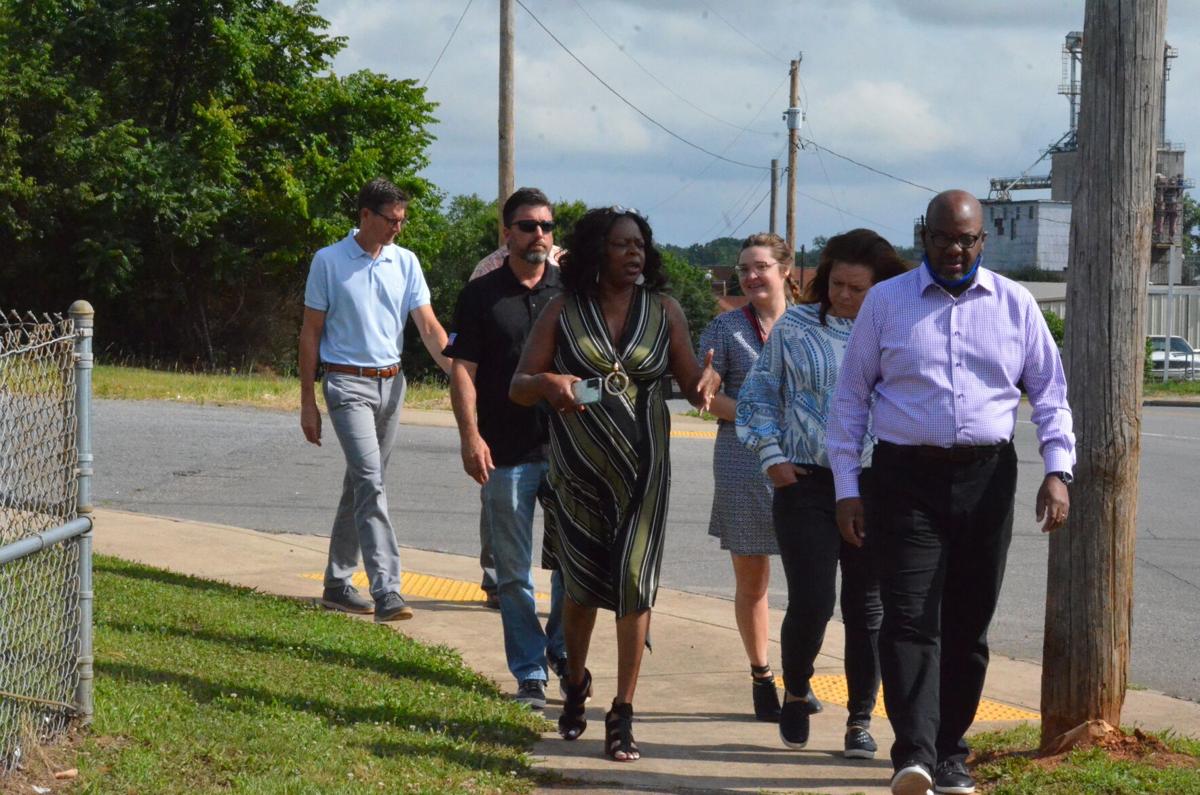 Brian Summers of the Sidewalk Institute leads a group of local leaders toward a crosswalk on Garner Bagnal Boulevard in Statesville on Friday.

Garner Bagnal Boulevard is one of the busier roads in Statesville, which also makes it dangerous for pedestrians to cross.

That’s why Brian Summers of the Sidewalk Institute invited local leaders to the crossing of Shelton Avenue in an effort to keep the ball rolling on improvements to crosswalks to make them safer for pedestrians.

“It’s to bring awareness to this part of Garner Bagnal there is a pedestrian hazard in the city and that as things open back up from the pandemic, you’re going to have more and more foot traffic, people, coming from Statesville and walking into downtown,” Summers said. “It’s just a concern and I wanted to see what I could do to make it better for the community.”

Currently, the Shelton Avenue crosswalk is painted, but there aren’t lights to direct pedestrians across one of the city’s busier corridors.

Statesville Housing Authority Commissioner John Gallina said that while the safety of citizens crossing the road is the primary concern, improving the safety also opens up the city to more foot traffic from the southern part of the city.

The issue of improving the crosswalks on Garner Bagnal had been on the mind of City Manager Ron Smith before Friday, but with the North Carolina Department of Highways having jurisdiction over the road, it’s a matter of local leaders highlighting the need to the state-level decision makers.

That’s where Sen. Vickie Sawyer plays a role advocating for the city.

“To make sure that these types of projects are high on the list. I can only do that when I have support from the city and locals… So that the project doesn’t get buried by other projects,” Sawyer said.

According to Assistant City Manager Scott Harrell, NCDOT has indicated they have funds to install improvements at two intersections on Garner Bagnal and are currently studying the Wilson W. Lee Boulevard and Cochran Street intersections along the road.

Harrell said the studies take 90 days, and the process of designing and implementing changes goes beyond that. So while people at different levels of government are advocating, it isn’t a straight path to having any improvements done.

“Bureaucracy at its finest,” Sawyer said with a laugh. “But that’s how roads are built.”

Sawyer said there are many considerations, such as traffic flow, safety for pedestrians, and future road plans that make it a more complex situation than a city simply asking for the improvements.

And the sort of improvements that might be is another question. Harrell said while improved signs and infrastructure around the crosswalk areas are possible, each one comes with its own pros and cons. An underground or raised crosswalk would be safer for crossing traffic, but more costly. Those would also need to be properly lighted to help keep pedestrians safe from the possible criminals that could lurk in the shadows if not properly lit. That is its own safety consideration as much as the traffic safety issues.

No matter what happens, it’s a process, Harrell said.

“It’s a conversation and they’ll tell us what they can do, they need to do studies to see what’s warranted,” Harrell said. “It’s moving, and that’s the important thing here. The hardest part is getting it moving, and it’s moving now.”

Brian Summers of the Sidewalk Institute, left, speaks to local leaders about the need for improvements to crosswalks on Garner Bagnal Boulevard in Statesville on Friday. Pictured from left are John Gallina, Kim Wasson, Ron Smith, Vickie Sawyer, and Scott Harrell.

Brian Summers of the Sidewalk Institute leads a group of local leaders toward a crosswalk on Garner Bagnal Boulevard in Statesville on Friday.