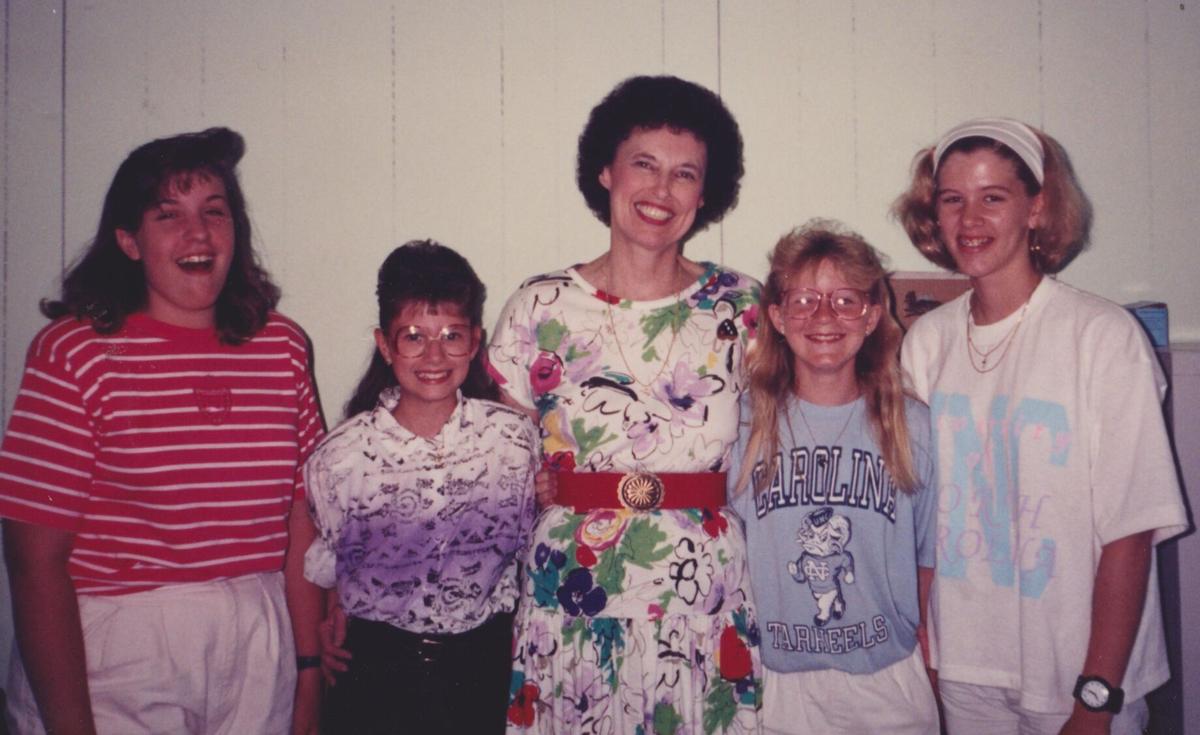 Libby Campbell is shown with some of her students at Harmony Elementary School in 1991. 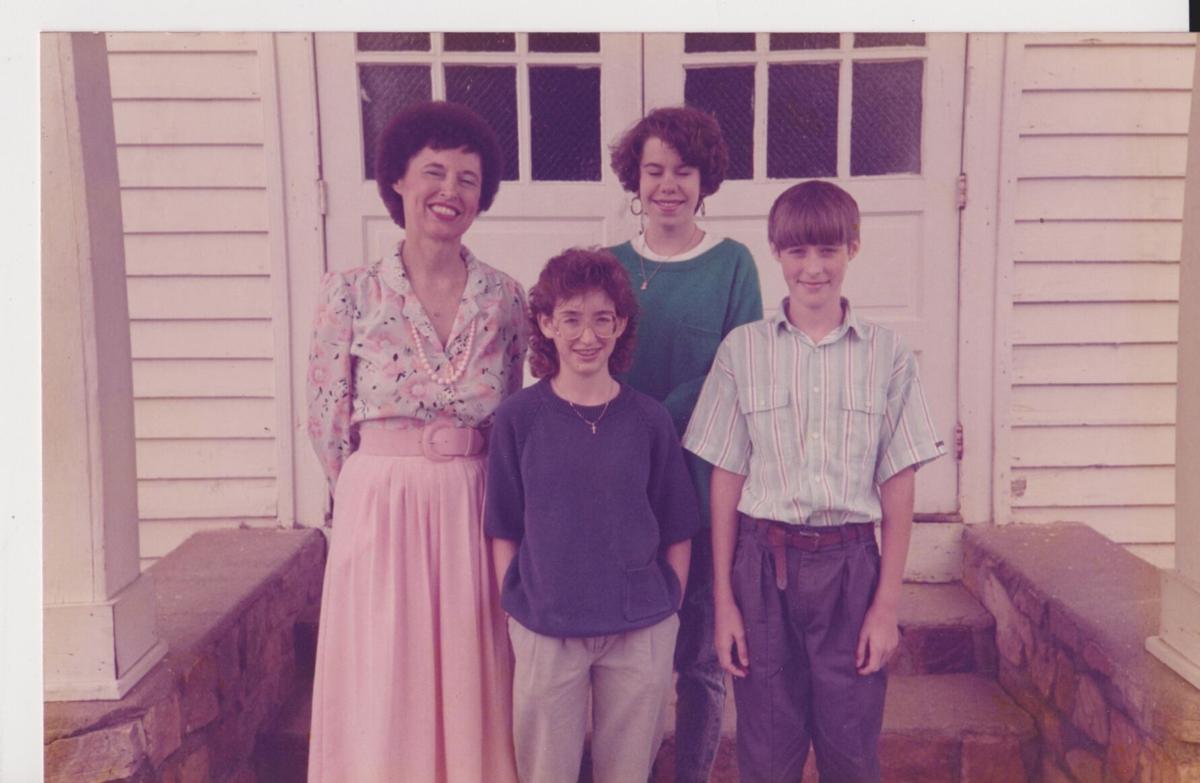 This crayon-on-paper sketch was by “Marlene,” a student in Mrs. Sandra Milholland’s class at Cool Spring Elementary, year unknown. Miss Libby must have dropped by and worked with Mrs. Milholland’s young students, and a booklet of drawings was sent as a thank-you gift. Marlene also noted, “Mrs. Campbell is nice She helpes us write poems. Reads Poems. She blows bubbles sings songs.”

Mrs. Elizabeth Steele “Libby” Campbell, 82, passed to her reward on June 21, 2020. She had been frail for some time, but never complained, never allowed anyone to make a fuss over her, and in every way, remained a prime example of a Southern lady. She was the eldest of seven children, two girls and five boys, and was raised on a 20-acre cotton farm in eastern Iredell County. One of her brothers told me how the family’s kids picked cotton by hand, beginning about the time of the county fair and finishing up just before Thanksgiving.

Libby loved books and decided to plant ideas in the minds of children, rather than cotton seeds in furrows of red Carolina clay. I recently had the privilege of looking through some of the numerous scrapbooks she kept about her students in the Iredell County Schools. A graduate of Cool Spring High School, “Miss Libby” taught at that school as well as at North Middle School, Monticello, Harmony and Union Grove. For part of her long career in the classroom, she taught academically gifted students, an assignment that can be challenging in the extreme.

In her scrapbooks, Miss Libby preserved photos, newspaper articles, letters, as well as some of the poems and stories written by her students.

I will just tell you about what I found in one scrapbook, that of Union Grove and Harmony schools, for the school year 1988-89, where she taught a daunting mixture of 23 children in grades four through eight at the two schools. The scrapbook I examined contained news items, photos and work of sixth, seventh and eighth graders.

Miss Libby encouraged her students to enter contests — national, state and local ones. In May of 1989 it was announced that two of Libby’s students, 12-year-old David Johnson, from Union Grove, and 14-year-old April Hix, of Harmony, had won, respectively, a second- and a third-place in a national essay contest and as a result, got a small payment ($10 or $15).

Imagine getting paid to pluck words from the air, to put them into some kind of order and then to receive money for your efforts.

And then their entries were published in a newspaper, “Free Spirit,” beating-out some 200 other entrants from all over the country.

Miss Libby’s students, along with students from Monticello and Celeste Henkel, took a bus trip to Colonial Williamsburg that year. Photos show the students standing in front of their chartered bus, and a photo of some of them in the pool at the motel. And, of course, there is a photo of the students, “the Crew” as Miss Libby refers to them, at that favorite activity of 12- to 14-year-olds, eating.

An essay by Union Grove student Ethan Myers, titled, “It’s 2010 and I’m…,” is in the scrapbook. Ethan tells us that in the year 2010 he expects to be a brain surgeon living in Los Angeles, specializing in treating drug addicts and transplanting cerebrums.

On another page is a 14-line poem, “Snowy Day,” by Joel Beavers of Union Grove.

Photos show students practicing parts for a play, “The Couch-Potato Dad,” which they videotaped.

In another scrapbook, students are photographed talking with authors by telephone. Imagine reading a novel and then having the chance to speak to the author. Often the author would send a personal letter to Miss Libby’s classes, and Miss Libby would, in turn, send examples of her student’s work to authors, to be critiqued.

This was 33 years ago. The students mentioned above, bursting into adolescence then, are 43 to 45 years old now. I cannot help wondering what happened to them and their dreams.

Did some, like essayist David Johnson or poet Joel Beavers, become poets or dramatists or journalists? Did April Hix or fellow students of Miss Libby, Anthony Johnson or Sherri Baggarly, become novelists?

And what about Ethan Myers? Did Ethan become a physician, or did some other academic discipline, say engineering or literature, catch his interest? Did any of her students follow Miss Libby and become teachers, passing on the torch, so to speak?

That, I think, would be the ultimate thank-you to Mrs. Elizabeth Steele Campbell.

The American historian, Henry Adams (1838-1918), writing in a less politically-correct time observed, “A teacher affects eternity: he can never tell where his influence stops.”

Winter is coming, but the Statesville Professional Fire Fighters Association stepped up to donate 150 coats to the Iredell-Statesville Schools…

Libby Campbell is shown with some of her students at Harmony Elementary School in 1991.

This crayon-on-paper sketch was by “Marlene,” a student in Mrs. Sandra Milholland’s class at Cool Spring Elementary, year unknown. Miss Libby must have dropped by and worked with Mrs. Milholland’s young students, and a booklet of drawings was sent as a thank-you gift. Marlene also noted, “Mrs. Campbell is nice She helpes us write poems. Reads Poems. She blows bubbles sings songs.”