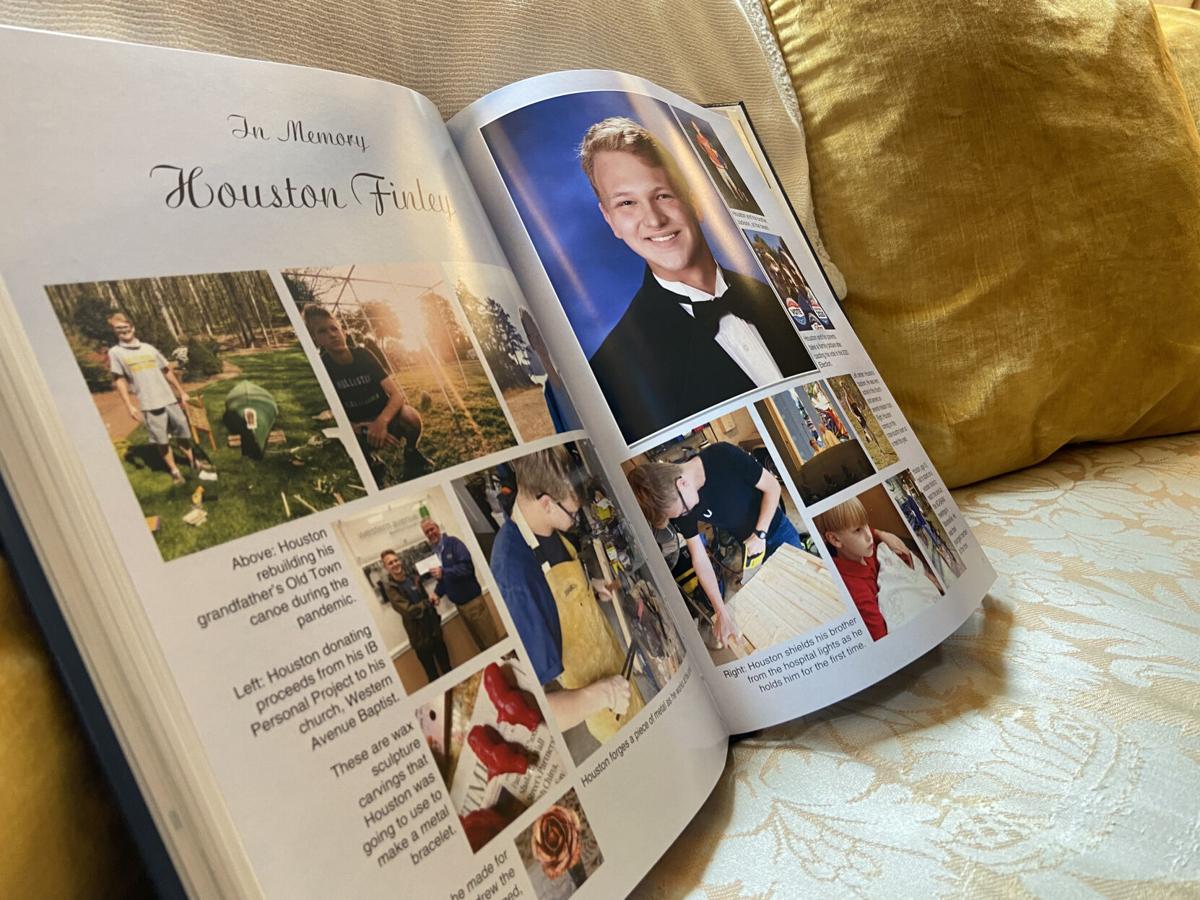 A memorial page for Houston Finley in South Iredell’s 2021 yearbook is displayed at the Finley’s home. 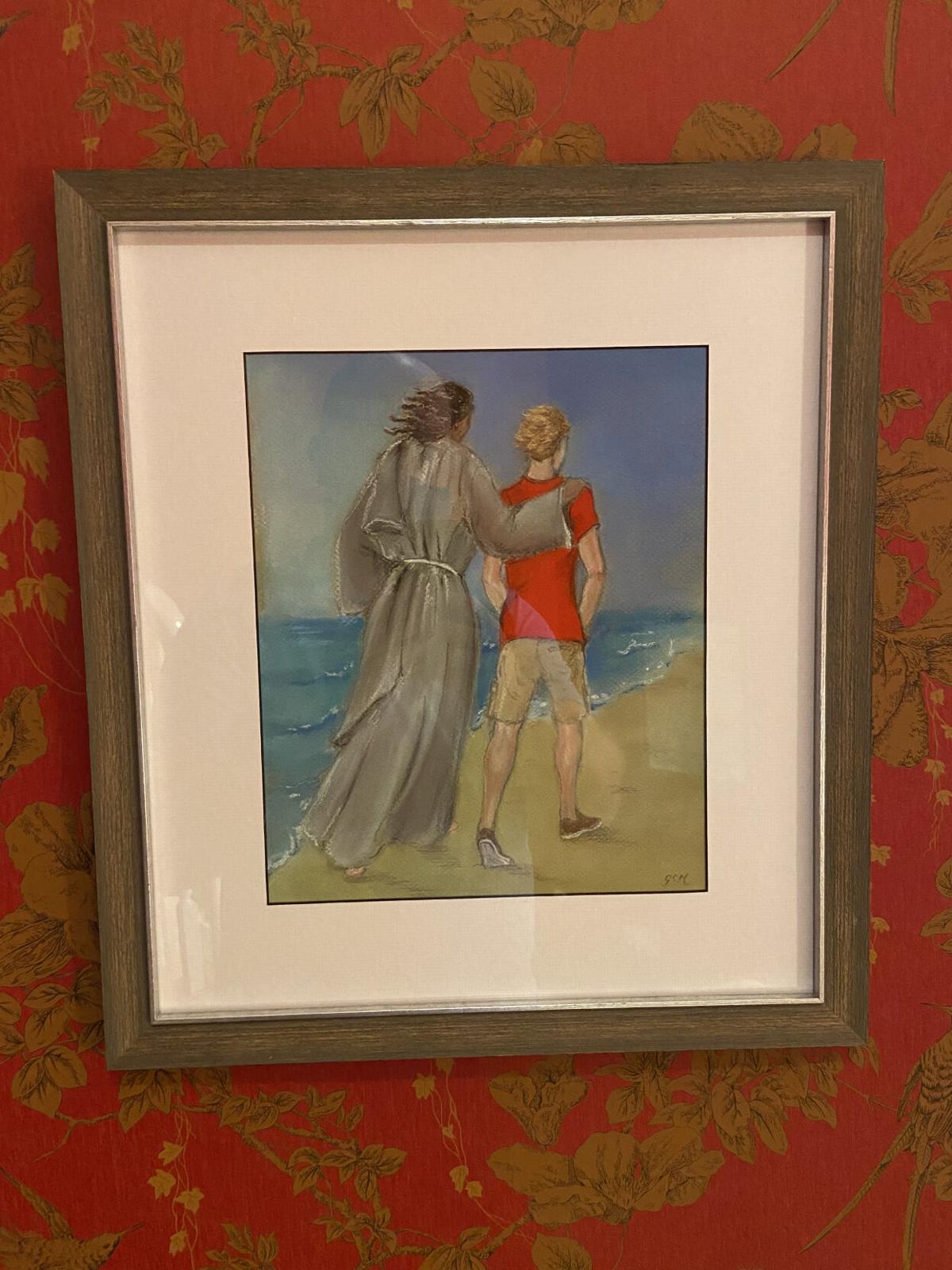 Houston Finley is depicted walking with Jesus in a painting commissioned by a friend of the Finley family. The painting by Jerry McElroy hangs in the family’s home in Statesville. 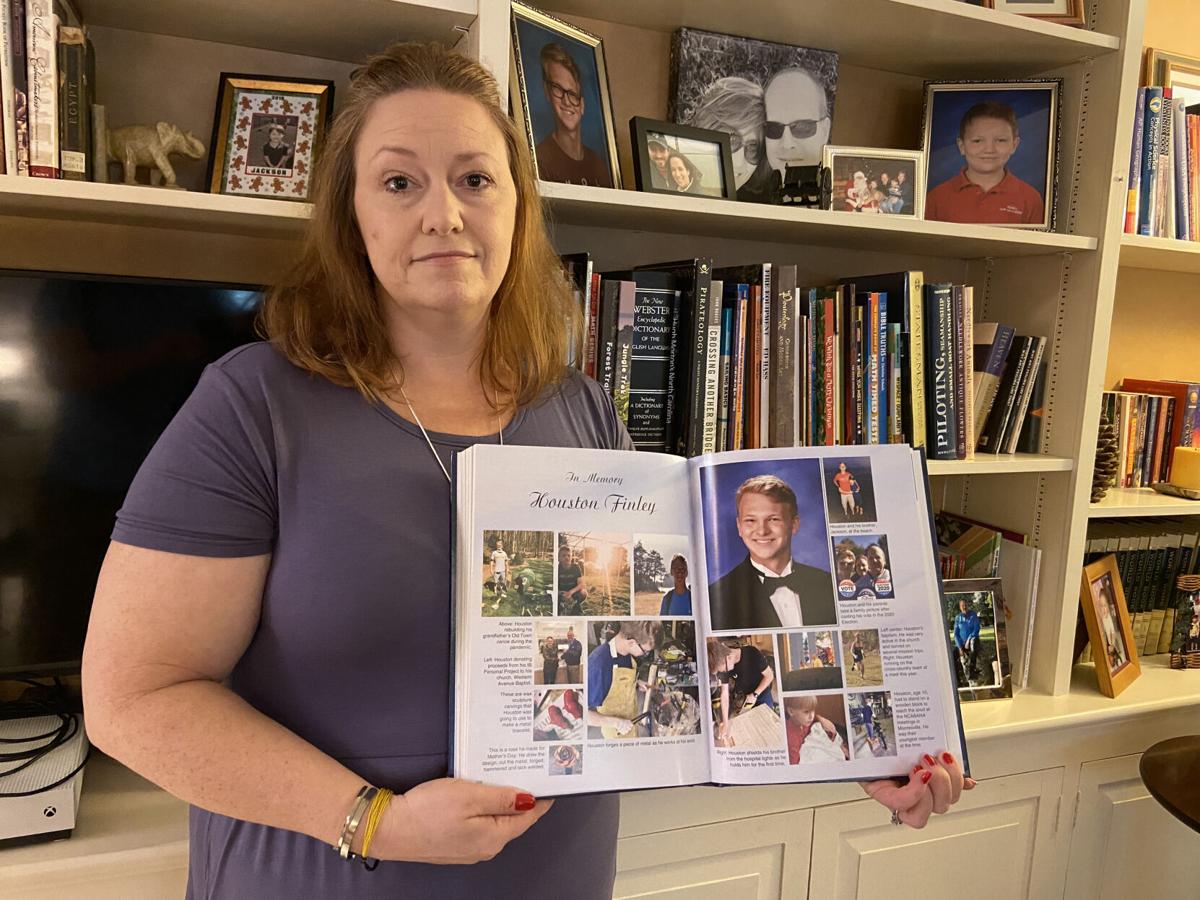 Ginger Finley shows a page dedicated to her son Houston from South Iredell’s 2021 yearbook in Statesville on Friday.

Ginger Finley simply has one goal by telling her family’s story — to prevent another family from experiencing the pain and loss she has experienced. Her son, Houston Finley, took his own life in February. He was 18-years-old.

The Finley family’s story will be told as part of a Suicide Prevention Town Hall Tuesday at 6 p.m. at South Iredell High School, where Houston had attended. She hopes by making people more aware of mental health in school-age children as well as ways to prevent suicide, a life can be saved.

“I don’t want another family to go through this,” Ginger said. “I just want to shine a light.”

Ginger said ultimately the family’s faith has helped them in the past months, as well as the support of friends and family. The duality of grief and love isn’t lost on her.

“We’re on a seesaw of so much pain, pain you can’t imagine, pain you can’t plan for, pain you can’t fathom. This loss of a child,” Ginger said. “On the other side of that seesaw is our community. Our church, our family, our friends. We’ve never been loved on more in our life. It’s just this seesaw back and forth of pain and hope, of hurt and support.

“It’s very complicated emotionally, and I wouldn’t want any other parent to go through that.”

From an early age, Houston was a very motivated, self-taught, and inquisitive child. Unlike many children who might show a passing interest and move on, Houston was someone who dove straight into it and tried to learn as much as he could.

“We always said he was an old soul. A 40-year old trapped in a little person’s body. We probably said that from the time he was 7. Learning came very easily, in school, in self-education, came so easily for him,” Ginger said. “We as parents just felt it was our job to feed that curiosity.”

First, it was rocks and geology, and then when he was 10 years old, his young scientific endeavors took him from rocks to metals. But he wanted more than an academic understanding, he wanted a hands-on experience. Ginger said they found a local group of artisans and Houston began attending their monthly meetings.

Despite the small stature that required him to stand on a block of wood to use a forge and anvil, his fascination with metalworking would grow from there to convincing his family to build a “real” one at home by the time he was 16. Ginger was a little fearful of him working with fire like that on his own, but Houston was able to change her mind.

“He said, ‘You know, I’m going to have my driver’s license now, I’m 16… if you think the state of North Carolina will let me drive a car, that you could let me build a forge?’ I could not argue with that,” Ginger said.

It was science as much as art for Houston. He made a metal rose for his mother for Mother’s Day. He was a craftsman as much as a budding engineer or scientist.

Ginger joked that for a while when Houston would tell them some obscure fact that didn’t seem true, they would fact check him. Turns out, that was a waste of time because he was right, Ginger said. Whether it was hands-on learning, picking his information from YouTube videos, or in the classroom, he was a sponge for information.

Houston pushed himself at South Iredell High School and, like many other students, had his eyes on college as he went into his junior year. Then, COVID-19 struck and what came with it were disruption and isolation for many students.

“It began a series of disappointments for him,” Ginger said.

Like anyone else, the Finley family found ways to make things work. Schooling took place virtually while Ginger watched over Houston and his younger brother, Jackson. Her husband, Dr. Robert Finley, was still headed to the office to work, but the family as a whole was doing its best to balance school and work while spending more and more time at home. Even socially, Ginger said they had Houston and some of their friends camp out in their own tents in the backyard so that they could hang out.

Still, things weren’t the same for him and many other students last school year.

Some of the usual hallmarks of the upperclassman years of high school were gone as schools struggled to balance out preventing the virus from spreading while continuing education. It wasn’t prom or other social events, but education itself that was thrown into chaos in 2020.

Ginger said one of the issues of students not returning after spring break in 2020 was how it affected students like Houston in the International Baccalaureate program at South Iredell High School. The program builds on itself, she said, and to start his senior year, Ginger said Houston and other students were both trying to keep up with their current work while making up the work that would have been done at the end of their junior year. It didn’t help that for certain subjects, a pass-fail grade was given after Ginger said he had worked hard for a specific grade, not just to simply pass the class.

That put a lot of stress on students and even with the family doing what it could to help, Ginger said Houston was spending more than half the day on a computer. She said while it clearly was putting pressure on him, he took it in stride as he worked to catch up and eventually did. However, the helter-skelter nature of remote learning and how assignments were sometimes distributed didn’t always make it easy on Houston.

“The sheer volume of workload was ridiculous, but there wasn’t much we could do about that,” Ginger said.

She said the focus on school also ended up preventing him from running on the cross country team, another disappointment for Houston.

While she didn’t believe any one of those was a direct cause, Ginger said she does believe the stresses brought on by the disturbances to Houston’s schooling and social life from the pandemic played a role.

It’s been trying to find a reason or determining what was going on that has been on Ginger’s mind often these last months. She isn’t looking to blame anyone, she said, she simply is trying to understand what might have led to her son’s decision to take his own life. As a mother, she’s been searching for signs and reasons for what happened.

She said she wonders if a quick, emotional outburst from Houston over something unimportant might have been one, but at the same time, she said she will always struggle because her son didn’t outwardly display some of the red flags one associates with suicidal ideations.

“The day he died, I said the most logical person I know, truly, has done the most illogical thing. I’ve got nothing for it. There was no note, no signs or symptoms, other than some disappointments his senior year. He had plans, he had dreams, he had goals,” Ginger said.

She since Houston’s death, she’s learned that he was one of as many as five school-age children in Iredell County that had died from suicide.

She said in the same way the school reports COVID cases and other health issues, she wishes the school system would announce that so parents could be more aware of the issues students face.

While she said Houston’s situation was different from others, she hopes that she can help by speaking conversations about not just what to look for to prevent suicide but to promote mental health among students. She said fighting through the stigma around mental health is important to let people, especially students, know it’s OK to reach out and ask for help.

“You need to have those couple of people you can be truthful to, to say you’re not OK,” Ginger said.

She said some of Houston’s friends after his death spoke about the same struggles he went through and realized they could find themselves contemplating the same things. She said the friends started a small chat group to check in on each other and take a serious approach to make sure their friends were mentally well and to help address the issue if they were not.

“That’s what you need, that small network of support,” Ginger said. “Talking to someone, you can save their life. You don’t have to have answers, you can help just by listening.”

A memorial page for Houston Finley in South Iredell’s 2021 yearbook is displayed at the Finley’s home.

Houston Finley is depicted walking with Jesus in a painting commissioned by a friend of the Finley family. The painting by Jerry McElroy hangs in the family’s home in Statesville.

Ginger Finley shows a page dedicated to her son Houston from South Iredell’s 2021 yearbook in Statesville on Friday.