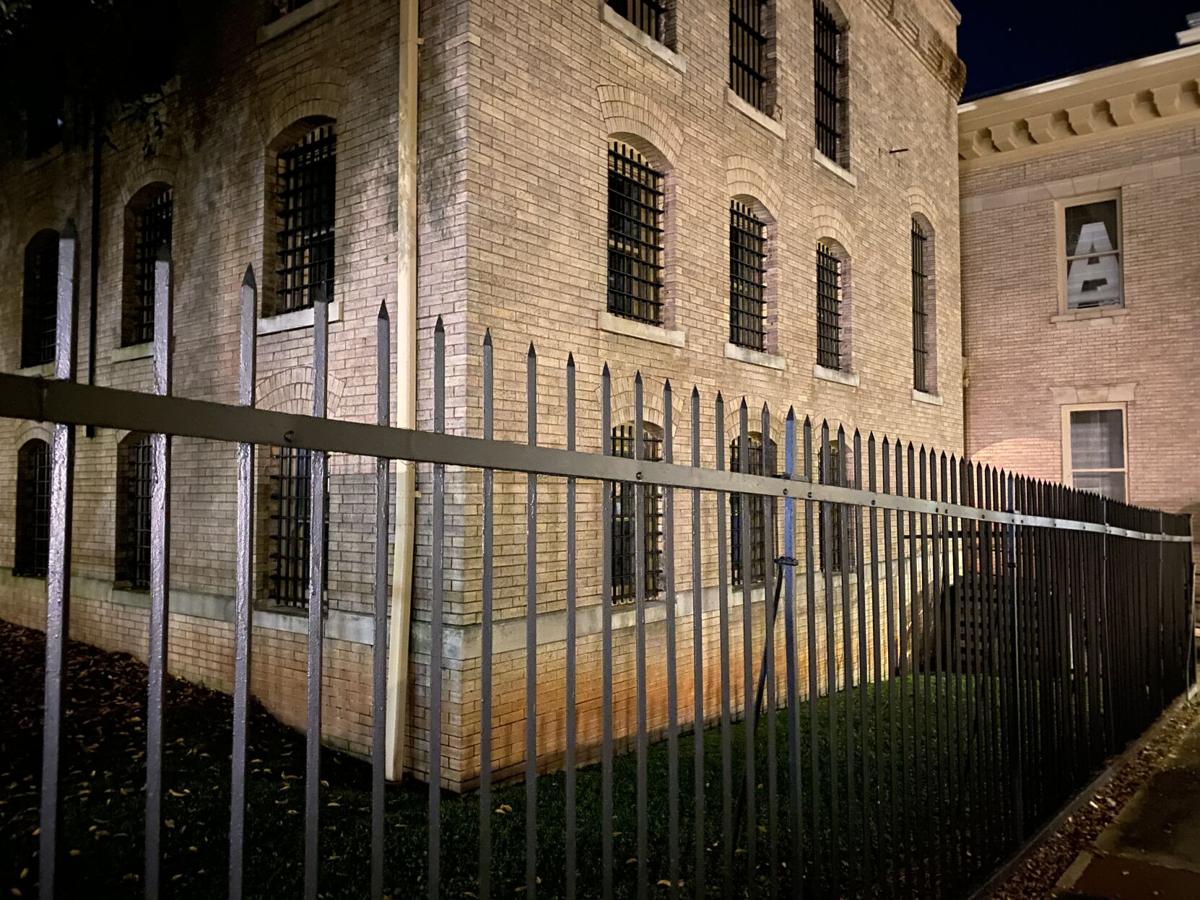 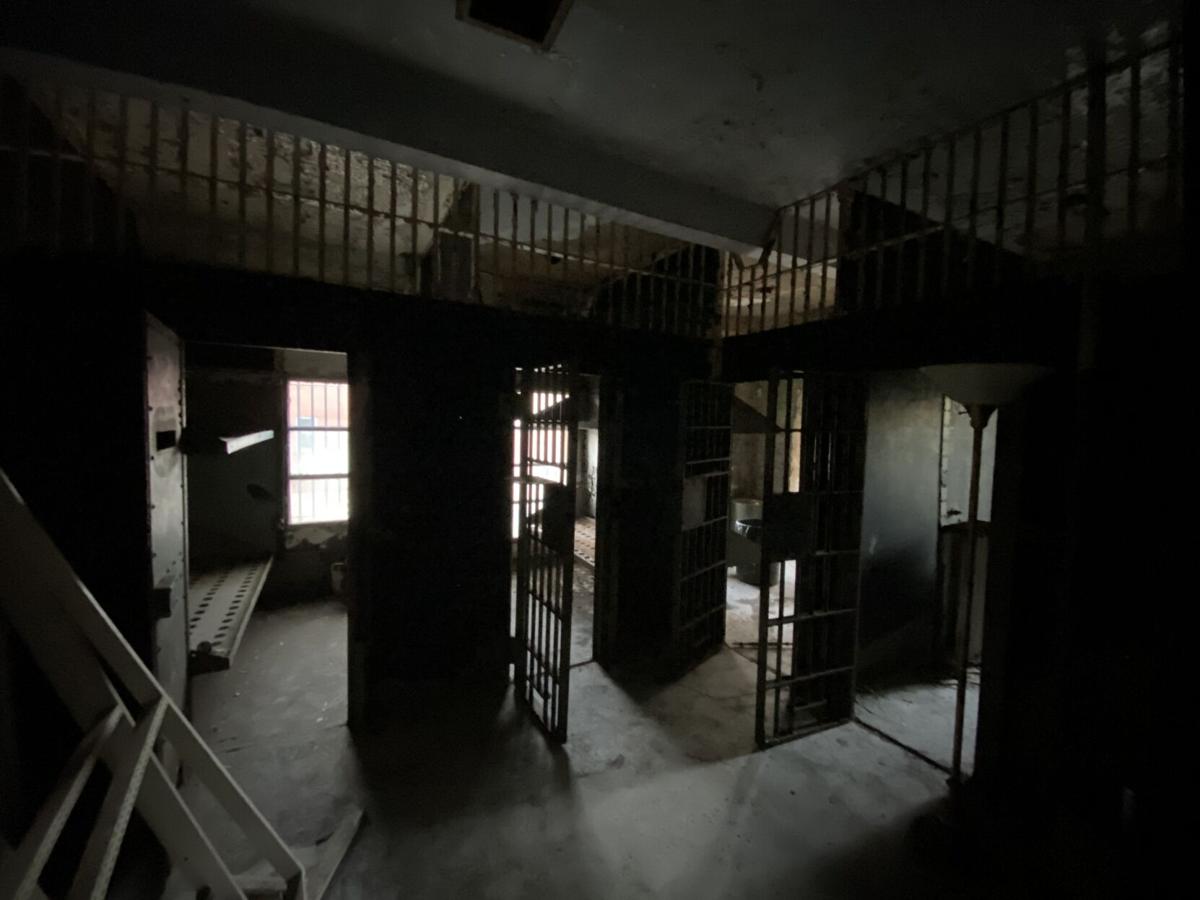 The abandoned cell block is seen on the second floor of the Old County Jail. 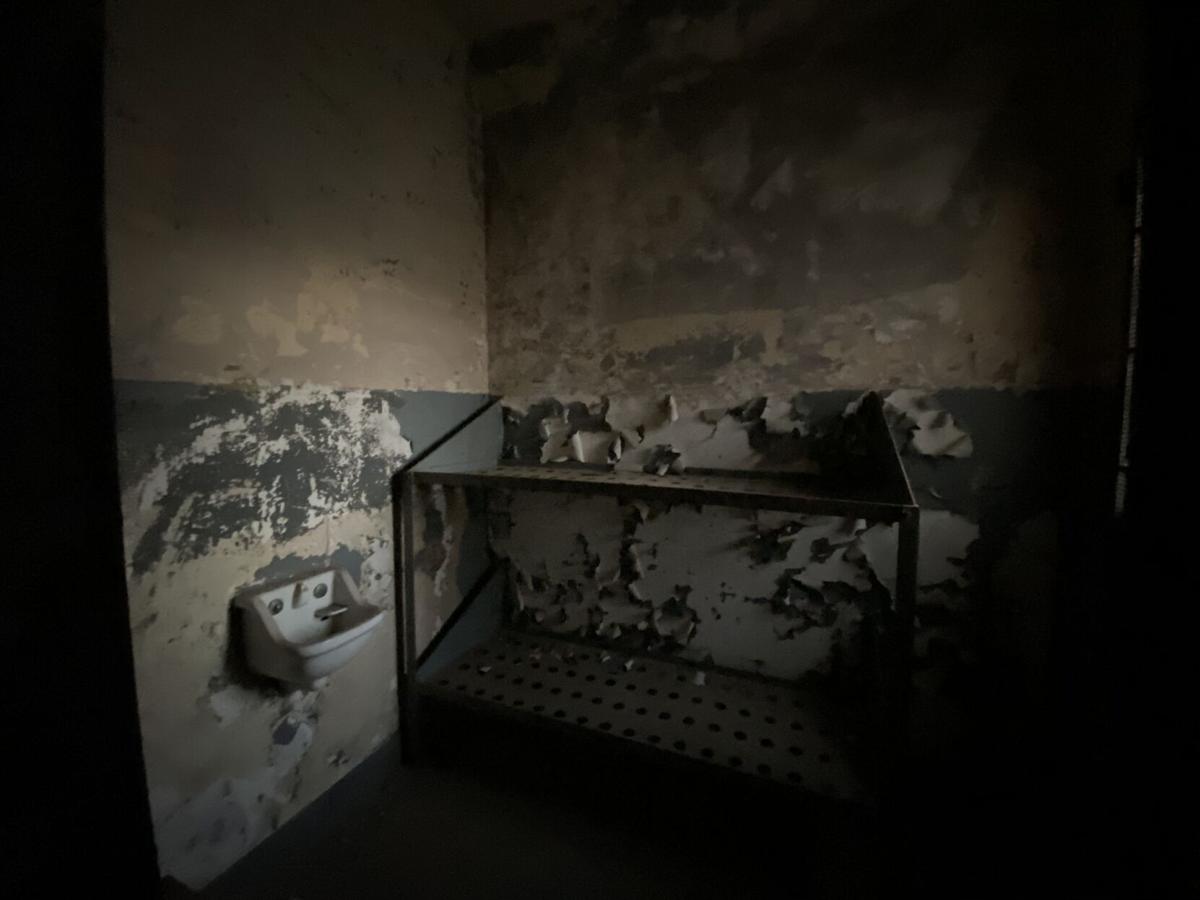 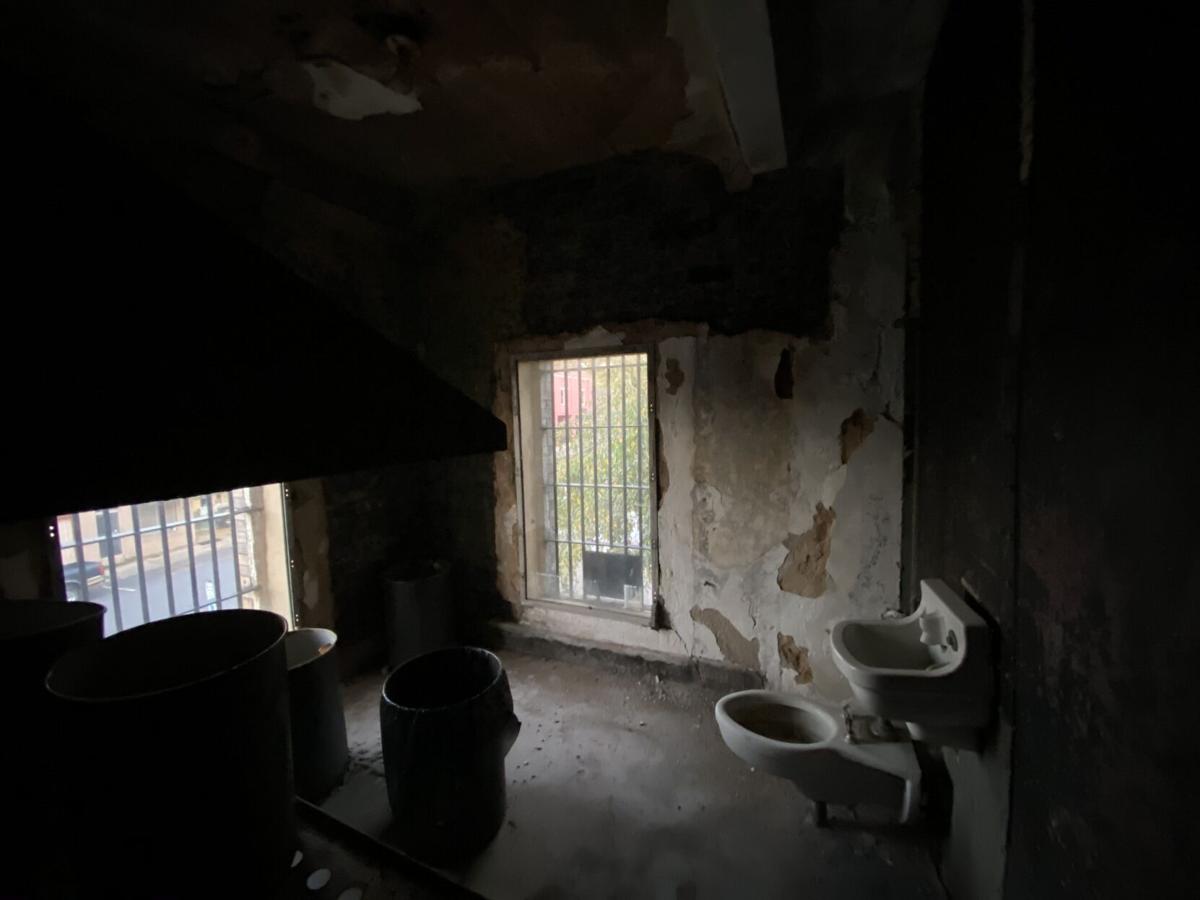 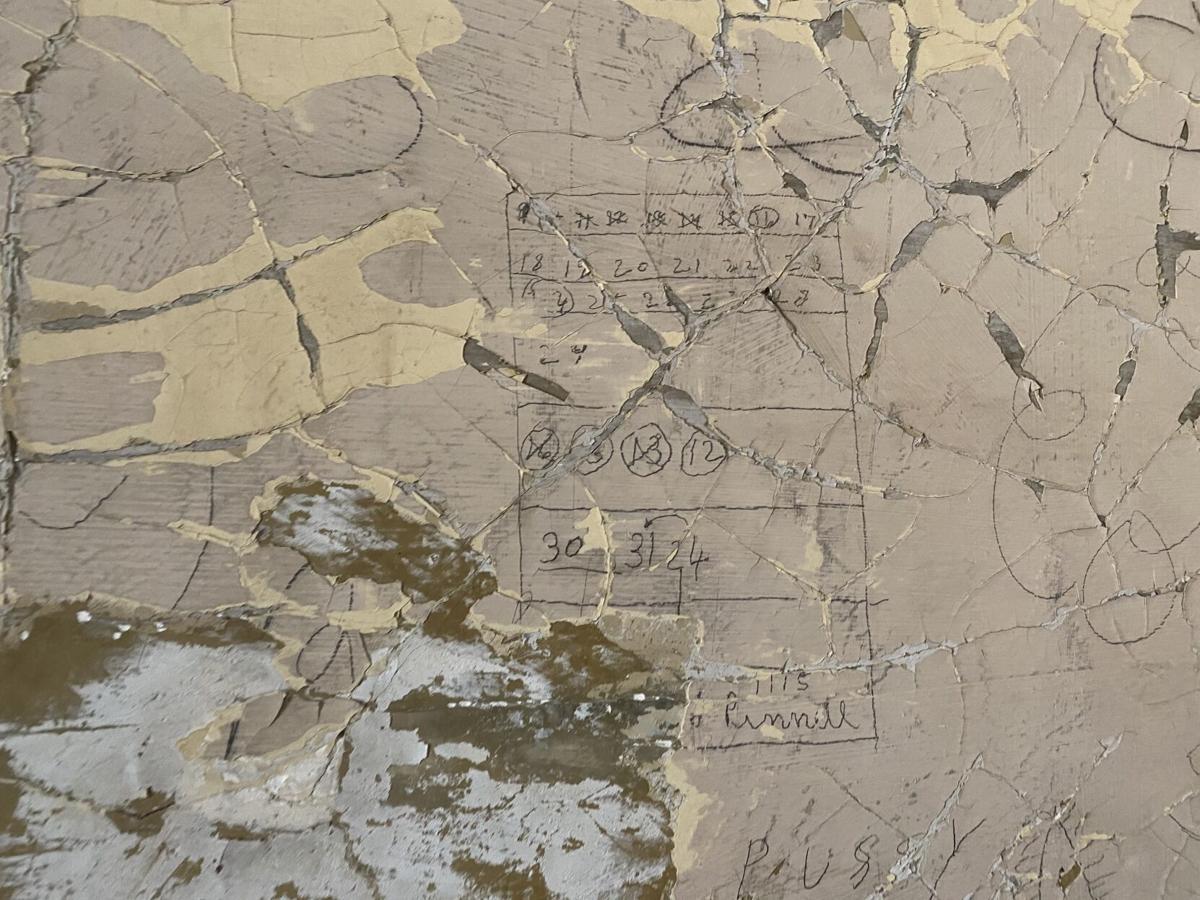 Writing remains on the wall of the Old County Jail. 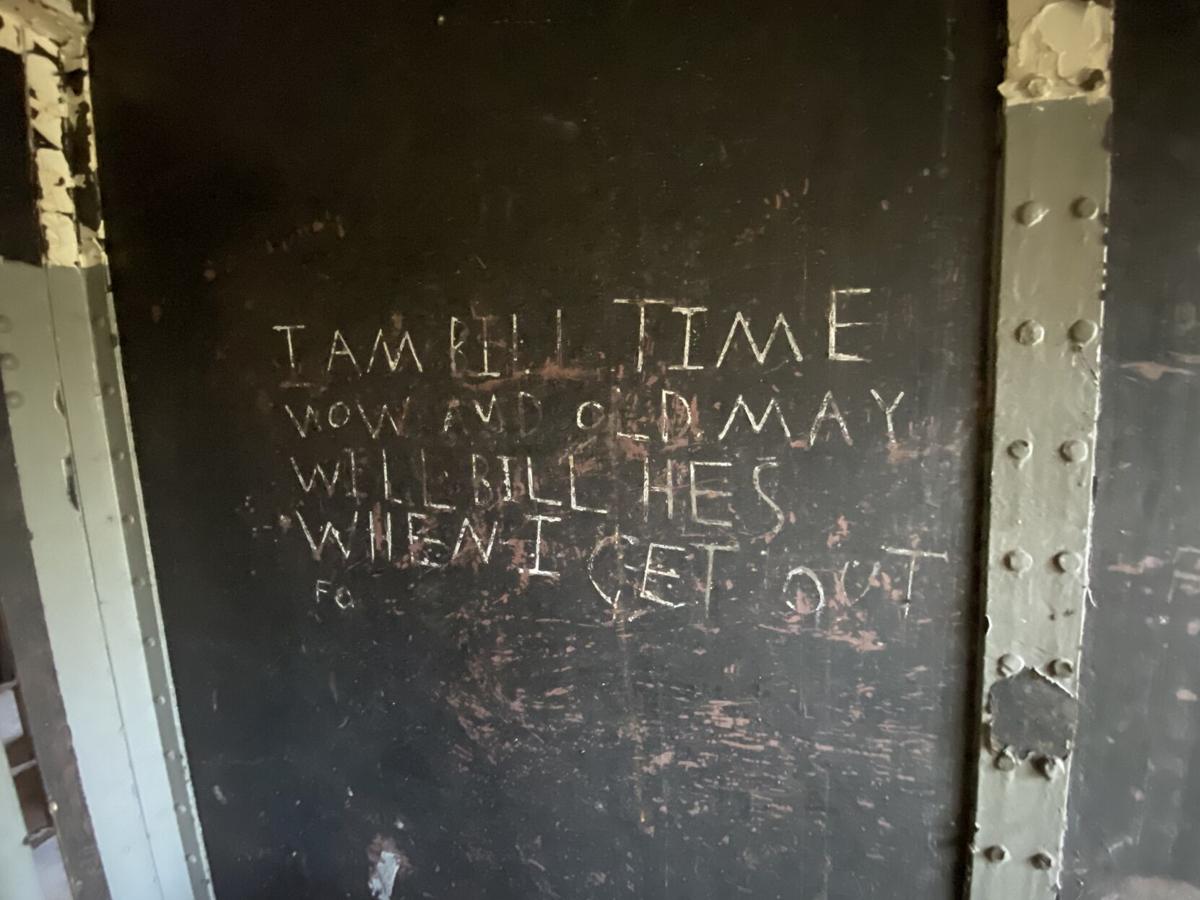 A note remains left on one of the walls. 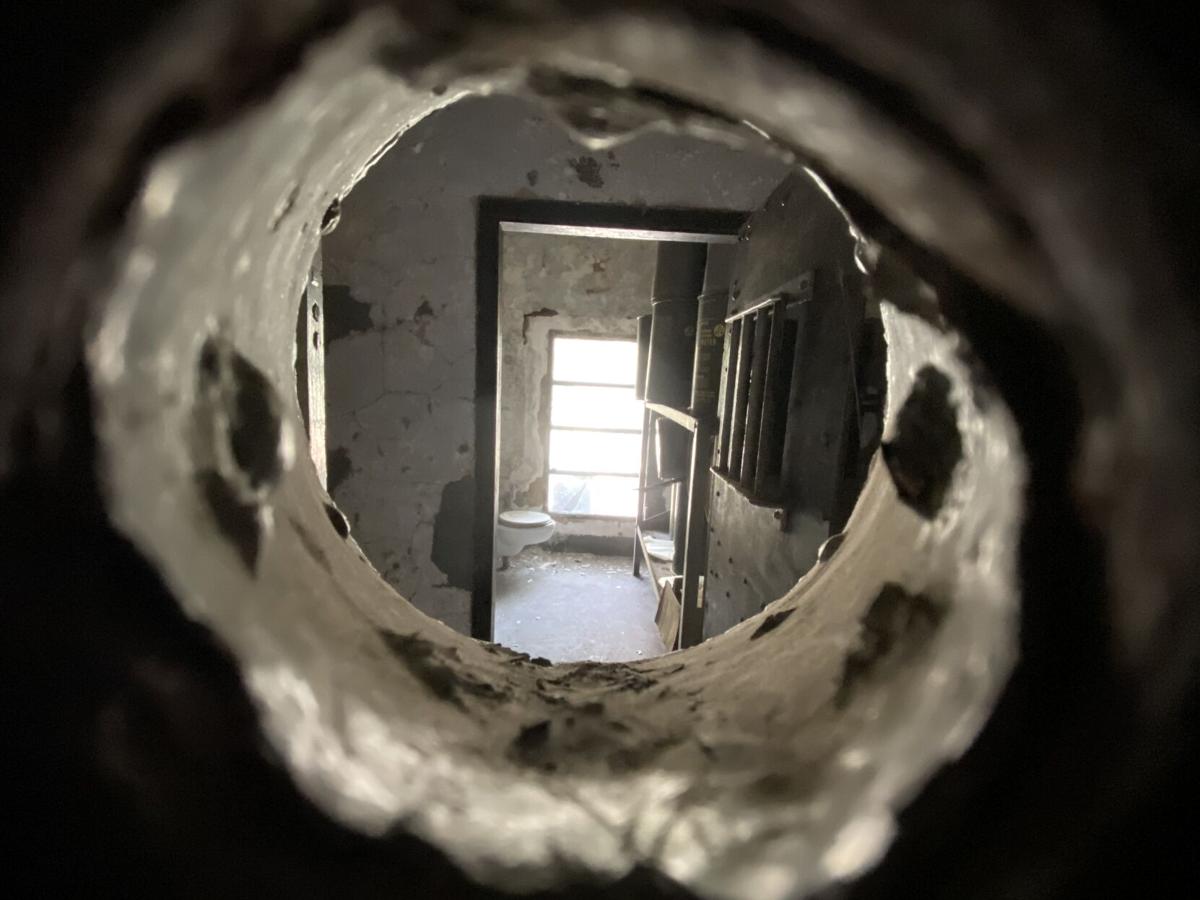 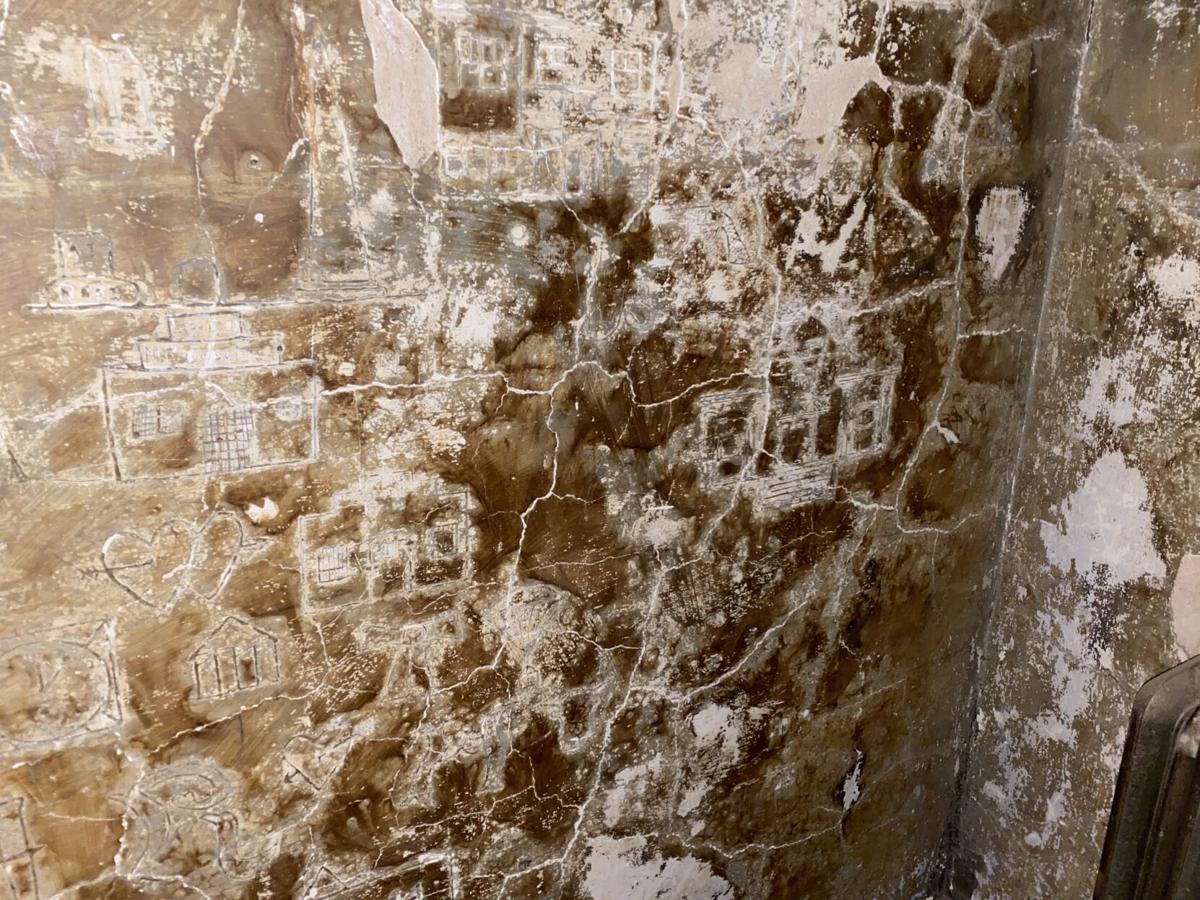 As I walked through the unoccupied jail cells, every step was accompanied by the crackle of decades of dried paint that had sloughed off the walls and ceiling and fallen to the ever-deteriorating tile floors. The years untouched left layers of dust, dirt and pulverized paint thick enough to leave footprints in as I paced from one cell block to the other.

The Old Iredell County Jail has stood on the corner of Meeting and Court Streets for over 100 years, but the ground it rests on has history dating much further back than that. With all of the negativity and death that existed on that land throughout its history, I knew that I had to make it my second stop in the “Iredell Ghost Stories” series.

The Old County Jail was built and opened in 1909 as an modern upgrade to the previous jail that had been on the same land. Meant to hold up to 50 inmates at once, the jail operated for 60 years before the county, once again, needed something bigger and moved to their current location on Water Street.

Since then, the building has been taken over by the Iredell Arts Council and they have repurposed the entire lower floor of the building as well as the portion of the upper floor where the county sheriff used to reside, but the majority of the second floor has remained mostly undisturbed for the last 50 years.

Some of the old cells are currently being used for storage of various IAC items, but as I walked deeper into the cell block and away from the entrance, the feeling of the building changed.

Paint, plaster and concrete was strewn across the floor from the five decades of neglect the cell block has seen. Aside from clear plastic that covered the old, open air cell windows, nothing had been done to the back portions of the jail.

Inscriptions, messages, calendars and art even remain on the cell walls, left over from their last resident in the late-1960s. Old books and farming equipment lays withering away in the cells as old drinking water barrels sit in random locations to catch water from leaks in the roof above.

The building was probably only slightly more dreary than it was when inmates were within its walls. The metal walls and barred windows seemed to hold in all the energy that those inmates gave off while stuck in the cells because the people that work in the building regularly can feel it at times.

The members of the IAC that frequent the building have had varying unexplainable experiences over the years. From footsteps to apparitions and everything in between.

“Sometimes, when I’m working, I’ll hear something,” John Kopplemeyer said. “We’ve got a bell on the primary door and sometimes I’ll hear it and get up to see if someone’s there and they aren’t.”

According to Kopplemeyer, other employees have reported hearing voices upstairs despite never having heard them himself.

The experiences even go beyond the people who work in the building. Statesville Public Affairs Director Nancy Davis once brought a visitor from the Savannah College of Art and Design into the jail and as they went up the stairs to the abandoned cell block, he froze, refusing to go any further.

‘There’s evil in this building,’ he said.

He turned around and walked out.

No doubt that there have been some truly evil people within those walls. The jail housed the likes of murderers and rapists when it was still holding inmates. The prior jail building held public executions of it’s convicts over the years, which many believe is what has caused any spirits to be attached to the old jail.

In my experiences in the parts of the building that remain mostly untouched from the time the jail was closed in the early-1970s, I found that the upper floor of the building has an unmistakable energy about it.

During my time there in daylight, I felt very little in the way of anything negative. Aside from the occasional loud car or truck going by outside, it was quiet. With my “amatuer ghost hunting” equipment of my phone and ipad recording audio and video, I was able to capture a few things, such as noises that I couldn’t debunk, but nothing undeniable like I experienced at the Trivette Clinic.

However, when I went back for a visit near sundown, I didn’t feel like I was meant to be up there. Like something wanted me out. The energy of the building was totally different. I would tell people to go experience it for themselves, but the interior of the jail has been out of the Statesville Ghost Tours for years now and very few people have even been up there.

Whether it was just my nerves getting to me in the darkened jail cells or something paranormal affecting my senses, I was only able to stay up there for around 20 minutes when my “investigation” in daylight lasted well over an hour.

Much of the negative energy in the building likely stems from the executions carried out on the property.

A majority of the dozen or so public executions to be held in Iredell County over the years took place on the ground the old jail now sits on, including some of the most notable ones.

In October of 1878, Jim Laxton, a black man, was sentenced to death by hanging for raping a white woman by the name of Nancy Barlow. Laxton, while standing on the gallows, exclaimed, “I am not guilty of the charge…”

By all available accounts, the hanging was a somber affair. Laxton was more-or-less carried to the gallows due to fear compromising his ability to stand. Adding to that, as his final words, he sung a popular hymn of the time, “Why should we mourn departed friends”, to which some of the 2,000 Statesville residents in attendance joined in.

Not only that, the hangman made a crucial error in adjusting the noose for Laxton’s height and weight, causing his death to be an agonizing nine minutes of strangulation rather than the quick death that is usually caused by a broken neck. It would be 25 years before Iredell County would execute another man in what would prove to be the county’s final public execution.

Wilfred Roseboro was the final person to be sentenced to hanging outside the old county jail, an event that took place in early September of 1903. He was convicted for the murder of Mrs. Dovie Beaver in the Cool Springs area.

I did, however, find many accounts in my research that seemed to indicate that all of the evidence that implicated Roseboro would be considered circumstantial in today’s day and age, but black men were often assumed guilty regardless of evidence in that time period.

In regards to his execution, it was, in many ways, the exact opposite of the one 25 years prior. Roseboro was, according to the newspapers the following day, was ‘stoic’ and composed on the gallows, offering no final statement and having confessed to the crime to a minister earlier that morning.

The crowd, though...the crowd was raucous. The tore down the cloth meant to offer privacy to Roseboro in his final moments and hurled insults and jeers at him from the streets, windows and roofs that lined Court Street.

Obviously, any execution is liable to leave behind some kind of long lasting imprint on the ground it happened on. The old county jail is no different.

Whether the spirits left there are of former inmates, guards, or just residual energy leftover from the building’s 60-plus years as the county jail is unknown to local historians, current IAC employees or anyone else.

But the people that work there say they hear things and I definitely felt something driving me out that evening. So while the ghosts of the Old County Jail might not have names, they’re definitely still locked within the walls...just like they were in life.

The abandoned cell block is seen on the second floor of the Old County Jail.

Writing remains on the wall of the Old County Jail.

A note remains left on one of the walls.