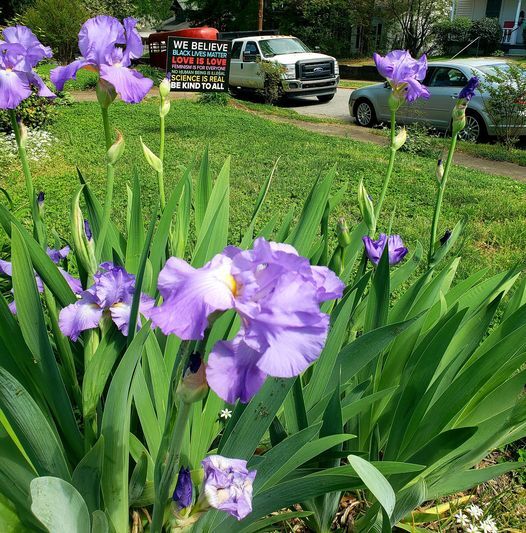 Purples irises planted by Chad West bloom this spring after being non-flowering for nearly a decade before Patti West said they bloomed this year, several months after her son’s death. 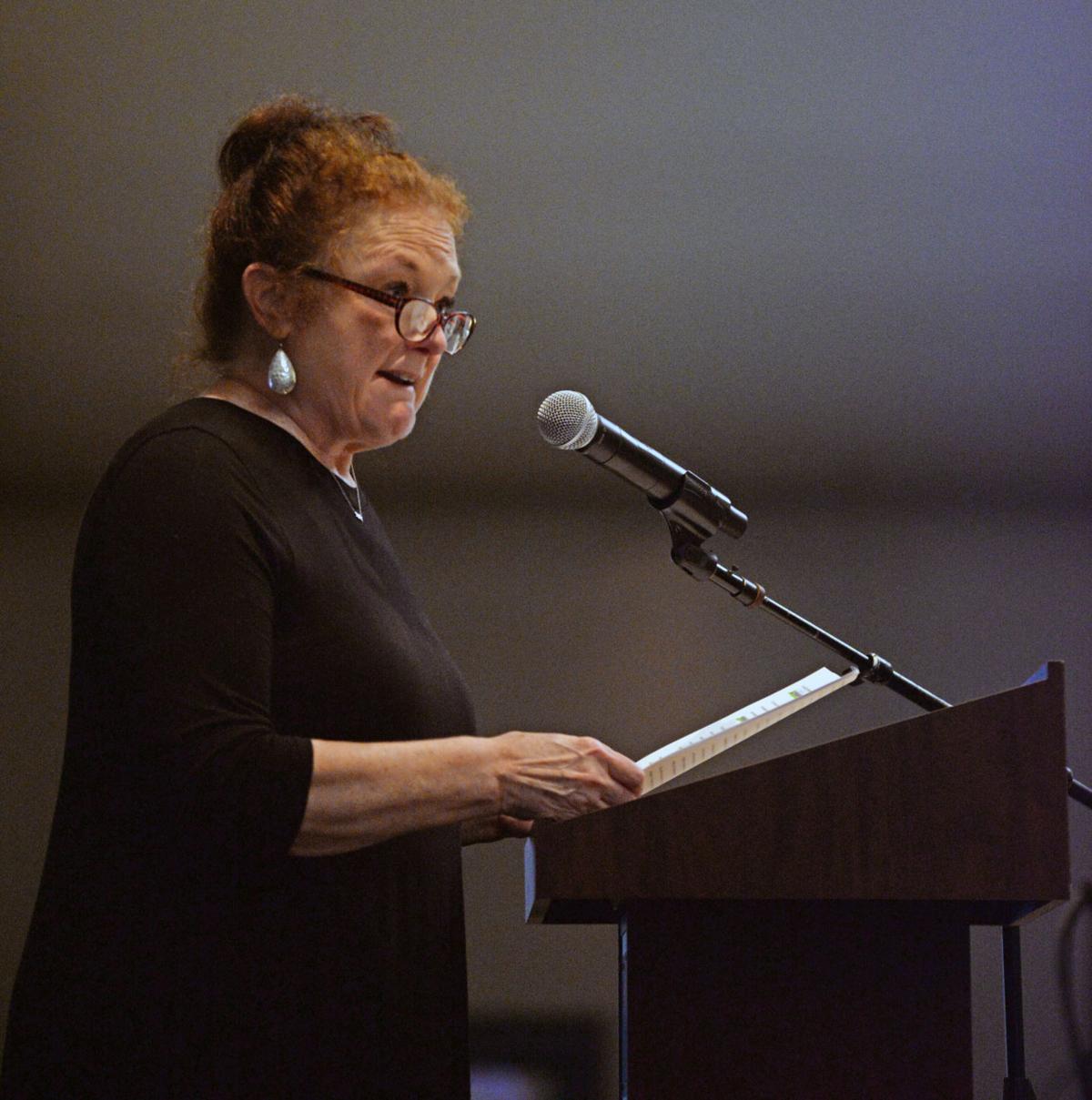 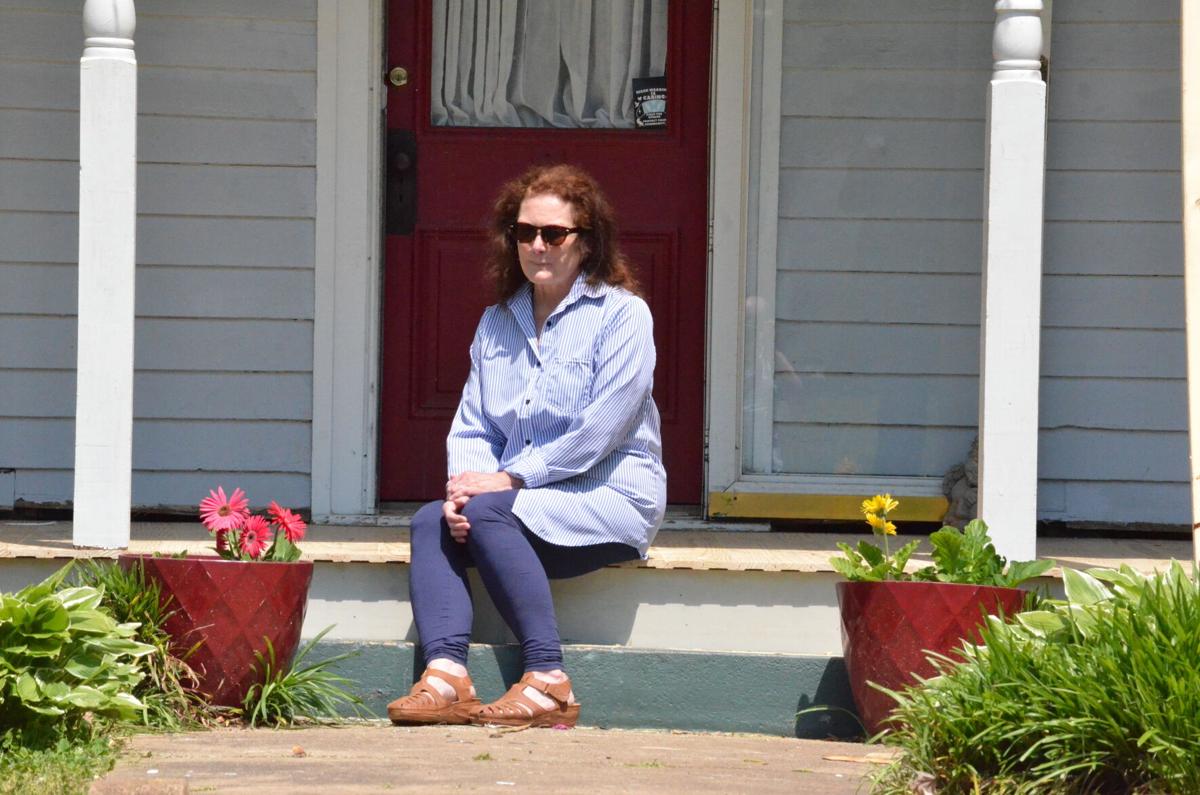 Patti West sits on the porch of her home in Statesville on Saturday.

Patti West has more time on her hands these days than she knows what to do with.

“I’ve been so used to being on go. All these projects that needed worked on or somewhere I needed to be, or somebody I needed to talk to,” West said. “I’m not somebody that is just going to be retired, I’m finding my way now.”

Since retiring from Fifth Street Ministries after 31 years, the nonprofit she and husband Gary West founded, she said she is figuring out what’s next for her as much as what to do with all her time now. West plans to move closer to two of her daughters — she is the mother of six children — but said she hopes to find time for volunteering once things settle down.

She now has more time for her children and grandchildren, which she effusively loves and praises, but she would be lying if she said she didn’t miss aspects of her work over the years.

“I knew it was time for me to do it, but it was bittersweet. The job there hasn’t been a job, it’s been my life. The folks I met there became my family,” West said. “It was a difficult decision to make, but I knew it was time.”

Unfortunately for West, that was made more clear last August as her son, Chad West, died at age 40 after battling issues with mental illness and drug addictions.

“It’s been so difficult. Anybody that has lost a child would understand the emotional impact of healing from that and at the same time walk with others as they’re trying to heal,” West said.

But she said talking about her son helps in the healing process as well, ensuring he won’t be forgotten. Her mother’s love was evident as she spoke of his “sweet, loving and compassionate” personality and enjoyment of cooking, often experimenting in the kitchen with different flavors and different meats and learning to cook by feel, not just from a recipe.

“Once you develop that skill, you know how much to put in by feel,” West said. She joked that he went from being a vegetarian to “a carnivore on steroids” as he grilled and smoked meats for family meals. She said he even would cook some more exotic meats, such as ostrich. “He liked to experiment with it. Sometimes it worked, sometimes it didn’t, but he had a good time doing it.”

Ultimately, finding a sense of belonging among family, friends, or fellow Grateful Dead fans was something West said brought Chad plenty of joy.

She said slowing down has helped with the grieving process as instead of keeping too busy to reflect, she has had time to process her family’s loss instead of working through it. However as a self-described high-energy person, planning one son’s wedding, several holidays get-togethers, and of course birthdays for her children and grandchildren, this grandmother has plenty to focus on now as well.

“I’m always looking for a reason to plan a party and celebrate and do something fun. Those things have kept me busy, so that’s a good thing,” West said. “I’m in the process of recreating myself. There are still things I want to do. There are other avenues that I want to pursue, other issues that I’m passionate about, and that I will never ever not be passionate about.

She said some of the issues she encountered while at Fifth Street — prison reform, racial equality, mental health, universal health care — are ones she’ll be focusing more on as time goes on. She said her experiences on a personal level and seeing it happen over and over again highlighted the shortcomings of how it is dealt with by society.

“I saw up close and personal the failings of our system. When you see that over and over and realize that it isn’t just a fluke one time or another, you realize the depth of the issues,” West said. “I feel like that is part of what I need to be doing, to help bring awareness and education to those issues, but also to be part of working with others toward change.”

“My calling in life is to speak on behalf of those that don’t have a voice or help them find that voice.”

A mother to more than just six children

But while West is obviously playing the role of mother and grandmother in her own family, her work with Fifth Street over three decades saw her in that role at times for others as well.

“I can’t not mention my children at Fifth Street. I had the privilege of being Momma Patti to many, many folks,” West said. “I found a connection to be a stand-in momma for them, and that was a great privilege to be able to do that. I can’t say enough about how grateful I am for the people I formed a bond with.”

The nonprofits work with homelessness and the issues around it often strained family ties for those struggling with those challenges, but through the ministry, West said, she often found herself serving as a motherly figure to those there.

It was those sort of bonds that helped motivate her to minister to those in need.

This Mother’s Day will be different in many ways for West, especially with the loss of her son, but she received an unexpected gift to remind her of Chad.

West said Chad was always a gardener and landscaper and loved growing things, a green thumb inherited from his mother. His experience was put to work at his parents’ home roughly a decade ago and included some irises, but their particular location and the fact they had never bloomed didn’t make them Patti’s favorite choice among the work Chad had done.

“I always intended to dig them up and move them, but the dirt was really hard. I never got around to it. But they kept growing every year and the bulbs would multiply, but they never bloomed,” West said.

The resilient plants held their own against mother nature as well as the intention of Chad’s mother for a decade.

Then earlier this year, West noticed something was different about those irises.

“I bet there were 30 blooms on it,” West said. “Just this vibrant purple. His favorite color was purple, and my favorite color is purple. So I really felt like it was a gift from him.”

“They are the best Mother’s Day gift I could have received.”

This 6,000-Year-Old Leaf Is Found in Perfect Condition

This 6,000-Year-Old Leaf Is Found in Perfect Condition

Will we be able to harness energy from lightning someday?

Will we be able to harness energy from lightning someday?

Purples irises planted by Chad West bloom this spring after being non-flowering for nearly a decade before Patti West said they bloomed this year, several months after her son’s death.

Patti West sits on the porch of her home in Statesville on Saturday.