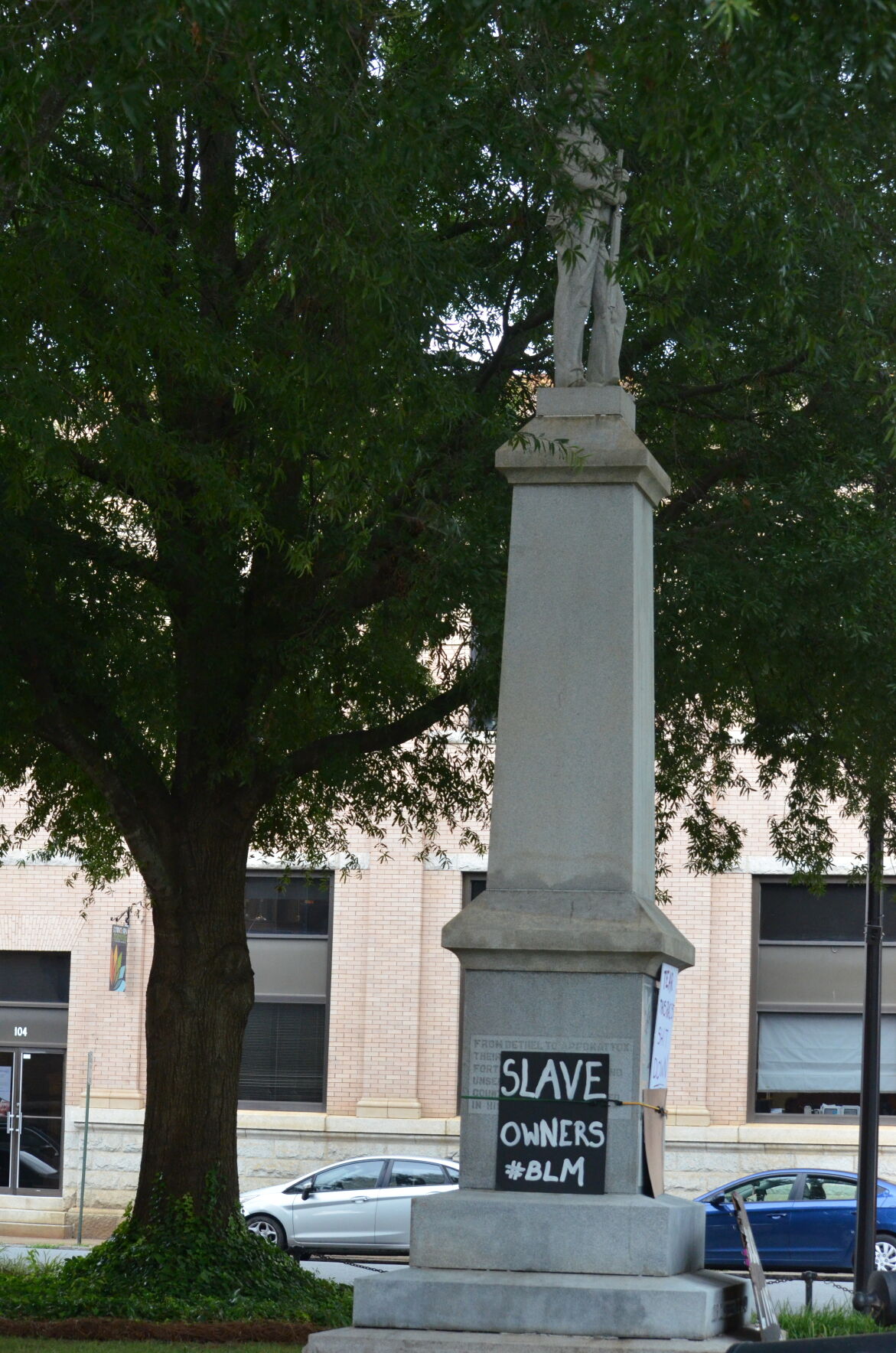 Protestors from Statesville4Change placed signs on the Iredell County Confederate Memorial in Statesville on Thursday. 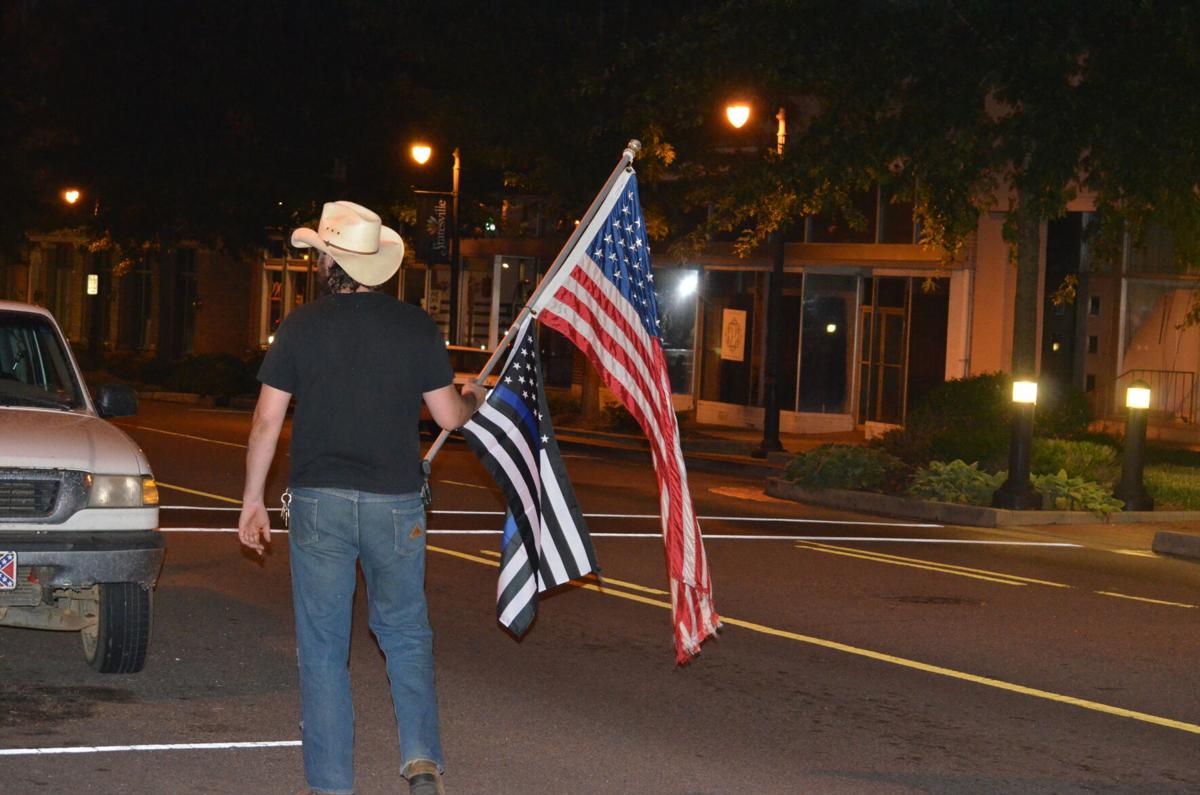 Jerry Shaver, a leader of the Iredell/Statesville History Guard group waves a American flag and "Thin Blue Line" flag at a protest in Statesville on July 15. 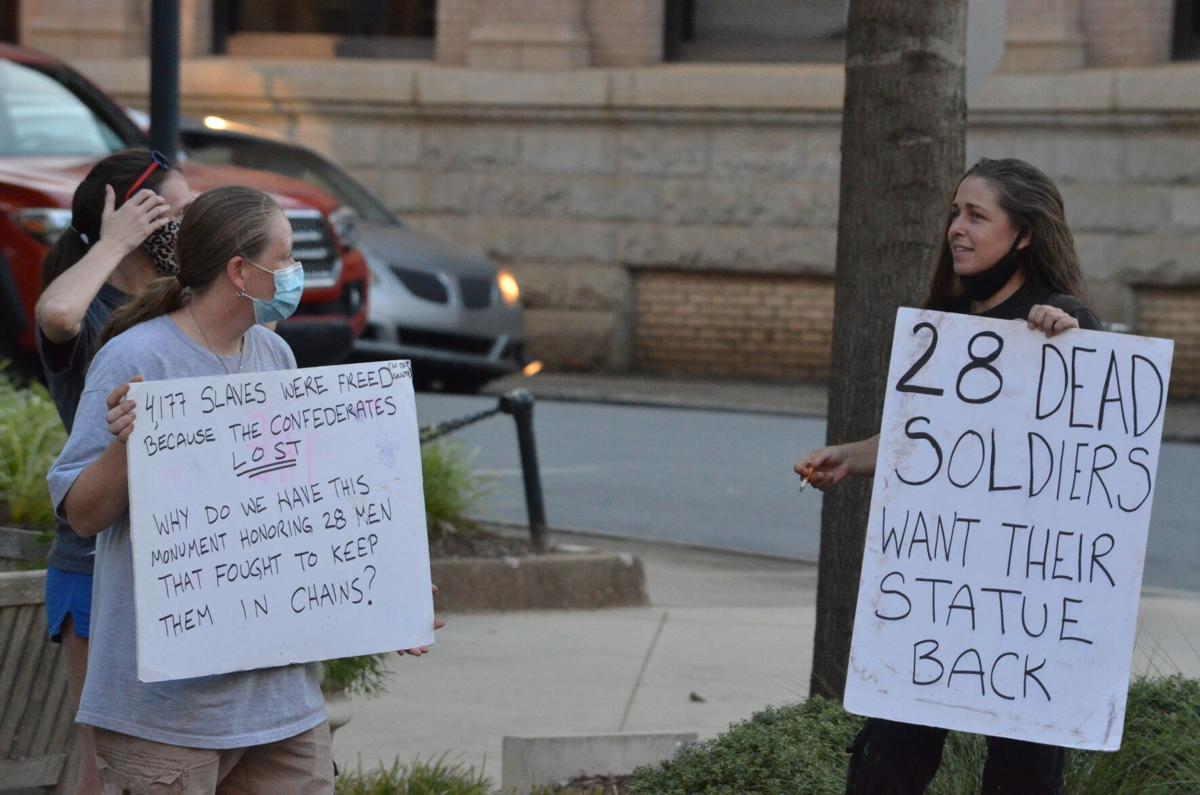 Storm Onole (right), an organizer for the group Statesville4Change, chats with other protestors in Statesville on July 15. 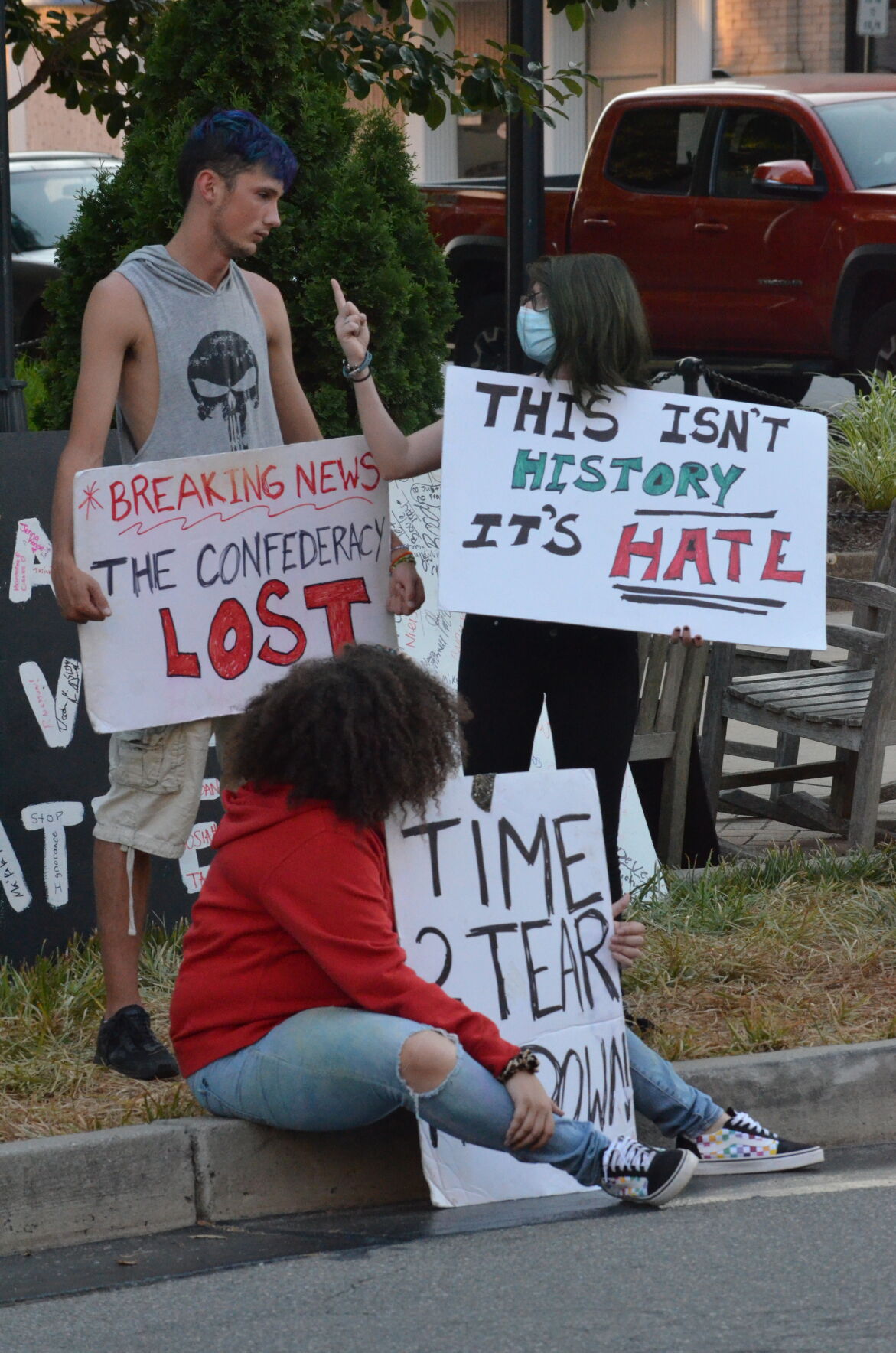 Protestors hold signs during a July 15 protest at the Iredell County Confederate Memorial in Statesville.

The people who want to see the Confederate statue removed from downtown Statesville say the protests will go on.

"I'm not leaving until the statue comes down," said Storm Onole, an organizer for the group Statesville4Change. "We're not going to stop."

Members of Statesville4Change say they've been in front of the monument protesting each evening for the past 50 days.

However, they haven't been alone. The counter-protesters, the Iredell/Statesville History Guard, are adamant they will be on-site to protect the statue.

The scene was calm other than rain and lightning on Thursday when Statesville4Change arrived, but the Iredell/Statesville History Guard said they would be there later in the night as well.

That wasn't the case earlier this week.

Michael Lee King, part of the Statesville4Change protesters, was arguing with a counter-protester when another man put the flag in between the two. King pushed away the flag before the unidentified man holding the flag went chest to chest with King, who shoved the flag-bearer. The two ended up fighting in nearby bushes before King put the unidentified man in a headlock, prompting a leader of the Iredell/Statesville History Guard, Jerry Shaver, to join the fight.

"That was me pulling a 20-year-old boy off of a 60-year-old man," Shaver said. "I'm not sure who the older guy was. That was his first time there but I couldn't just stand by and watch him get his a-- kicked. The last thing we want is violence but emotions seem to bring that out sometimes."

Only King was arrested.

Statesville police charged King with simple assault and resisting a public officer. In the summary of the police department report, Terry Marshall Causey, Jay Robertson Thaxton, and Sierra Carol Paterson are listed as suspects in the altercation as well. King, Thaxton, Causey and the State of North Carolina are also listed as the victims.

On Wednesday, Heather Dawn Poe and Patterson were arrested along with Onole for disorderly conduct according to police documents.

While the Statesville Police Department didn't respond to the Record & Landmark's request for more information, they posted the following on their Facebook page.

"We will never stop anyone from having a voice during these trying times. However, we will never allow disruptive behavior to become the norm and distract us from the necessary conversations which need to be heard. Last night, the Statesville Police Department mediated a protest and spoke with protesters on both sides and informed them of our continued stance. For the first couple of hours, we watched people engaged in meaningful conversations about change. Unfortunately, during the latter part of the evening, certain individuals were disruptive and arrests were made. We have asked and continue to ask for information of disruptive behavior. Please send us this information so we can investigate."

Protests have simmered all summer

The arrests were the first after nearly two months of protesting and counter-protesting.

The protests in Statesville started in the wake of the killing of George Floyd and like many of the protests across the country morphed from focusing on police brutality to other issues that affect Black people in America. Statesville4Change has positioned itself on the side of Black Lives Matter and has been led by Onole. The group has spoken out on a number of issues, but much of their focus has been on the statue's place in downtown Statesville. They've been accused of throwing eggs at the statue in Statesville, but no arrests have been made.

On the other side, is the group that calls itself the Iredell/Statesville History Guard. The group is against the Statesville4Change goal of removing the statue from the government center's grounds. Shaver has been one of the group's lead organizers. They've waved the American flag as well as the Confederate flag during the time at the statue.

They also have repeatedly claimed the Statesville4Change group is funded by George Soros, a billionaire investor who funds a number of liberal causes. When asked for evidence, the group did not provide any.

A Statesville issue on county land

As far as the statue itself, it isn’t going anywhere either.

Part of the issue with moving it comes from the fact the statue is on the county's property. The Iredell County Board of Commissioners would have to sign off on moving the statue.

Mayor Costi Kutteh said that Statesville isn't responsible for the statue as it is on county's property. He said it is the City of Statesville's responsibility to protect its citizens and the activity around it, and he's been satisfied with the Statesville police's response so far.

Iredell County Commissioner Gene Houpe says the commission won’t bring it up to vote. He also said he wasn’t sure if it was something a countywide election would call for as it isn’t something the whole county is concerned with when it's located in downtown Statesville.

“It is a no-win situation for us. So we're trying to do what's best for the majority,” Houpe said. “To me, if you put something like that on the ballot there are more arguments, more division within friends, family, and communities. It would to me, just putting something like that out front when it doesn't need to be out front and made an issue when I think there are more important issues facing our county, in our state, in our country, in my opinion, I just think we've got some very serious things that are a higher priority right now."

The statue isn't going anywhere, nor are the protesters and counter-protesters. And for now, the issue isn't dying down in Statesville anytime soon.

Protestors from Statesville4Change placed signs on the Iredell County Confederate Memorial in Statesville on Thursday.

Jerry Shaver, a leader of the Iredell/Statesville History Guard group waves a American flag and "Thin Blue Line" flag at a protest in Statesville on July 15.

Storm Onole (right), an organizer for the group Statesville4Change, chats with other protestors in Statesville on July 15.

Protestors hold signs during a July 15 protest at the Iredell County Confederate Memorial in Statesville.