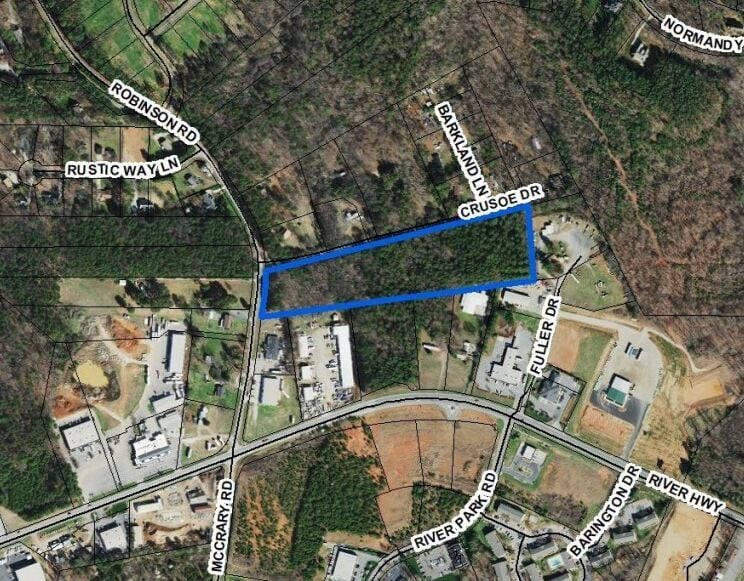 This is a map of the property in question. 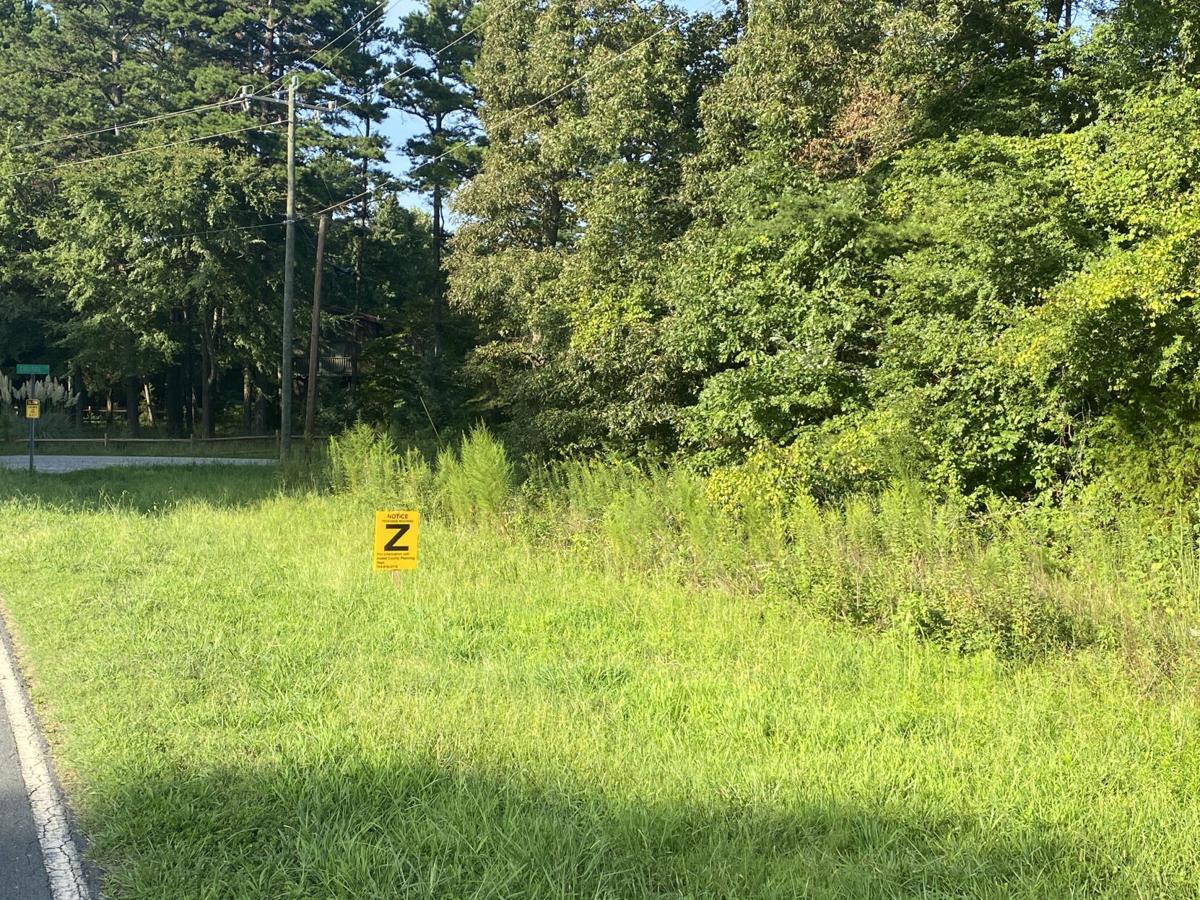 This area of Robinson Road off N.C. 150 is being considered for rezoning.

It can be tough to find a quiet place to live in Mooresville these days. So many people have flocked to the town in the last couple of decades that new construction and traffic will continue to cause headaches for years to come. However, for the residents of Robinson Road, they believe they have found their quiet place and they have been fighting hard to keep it that way.

Since early July, the residents of the winding mile and a half long road situated on a small peninsula on the western side of Mooresville have been fighting against a rezoning proposal on an 8-acre plot of land at 126 Robinson Road.

Over the course of multiple meetings, with the Iredell County Planning Board and the Iredell County Commissioners, numerous people living both in properties touching the 8 acres in question and further down the road have been vocal in their displeasure with the thought of the county rezoning the land from Residential-Agricultural to Highway Business.

“If this property gets rezoned for commercial use, what’s to prevent the next property down from getting rezoned commercial in the coming years,” Judy Curtis said at the commissioners meeting Sept. 1. “When we moved here, we moved knowing this is an entirely residential street.”

The land as it sits now is a heavily wooded area that not only acts as a natural sound barrier for the residents of the road, but according to them, it is teeming with wildlife that would be displaced by clearing the trees needed to facilitate the construction.

“There’s a whole family of (turkeys) that live over there,” Fred Reissman said. “They are very often in our yard. They usually stop for a meal in the wild plants we have.”

‘The traffic is really, really bad.’

However, the wildlife that calls that 8-acre plot home is just one thing on a long list of concerns the Robinson Road neighborhood has with the proposed rezoning. Among them, the added traffic due to the small businesses that would move into the proposed office buildings is a chief concern.

Among those residents, none has been more vocal with her concerns about the added traffic that small businesses would introduce to an already treacherous intersection than Anibaldi.

“There have been several people that have been in car accidents at the corner of 150 and Robinson,” Anibaldi said. “I have begged and pleaded for a light to be put in there.”

Anibaldi’s concerns are warranted considering her son was involved in a serious car accident in February 2016 that resulted in him being flown to Carolinas Medical Center-Main in South Charlotte with serious injuries. However, despite her pleas, Anibaldi claims she was told that there has to be at least six fatal car accidents at an intersection before a new traffic light is considered.

In the end, her son, Shylo, survived, but she continues to fight for traffic relief at that intersection.

“All I see with a commercial building is more problems,” she said. “Sometimes it takes a half an hour to get off this road. The traffic is really, really bad.”

Part of Kososki’s proposal alluded to the planned widening of N.C.150 and how that aims to fix some of the traffic headaches that turning off of Robinson Road causes. The plans call for a median to be installed for much of the busiest section of N.C. 150 in Mooresville, from the Catawba County line to the US-21 interchange. That median would prevent the dangerous left turn off of Robinson Road by funneling all traffic to the right and to a turnaround.

But with the recent announcement of the delay of that project to at least 2023, no traffic relief is coming for Robinson in the near future.

From the beginning, the residents of Robinson Road have done all they could to fight against this rezoning. Four property owners spoke out against the proposed rezoning in front of the planning board on July 1 with an additional eight residents that live further down the road speaking in front of the Board of Commissioners on Sept. 1.

Many of the talking points were echoed, such as the aforementioned wildlife displacement and the traffic concerns, but all that spoke against it were against highway business encroaching further into their neighborhood.

In her own research, Kuczmarski came across Iredell County’s 2030 Horizon Plan. On that plan, the property in question on Robinson Road is just outside of the boundary that the county set for urban development.

“They’re supposed to have a good reason to rezone it - to be able to prove it was a mistake or that something has changed,” she added. “I don’t see any of that.”

The residents of Robinson Road all feel as if this kind of rezoning and construction can be done elsewhere nearby, citing the amount of unused land that is already zone for commercial use.

By far the most vocal opponent of this entire project has been Reissman.

“We have a prime peninsula. Everyone has worked very hard for their property,” Reissman said at the commissioners meeting on Sept. 1. “Honestly, the county would be throwing that away (if the rezoning was approved).”

Even dating back to the minutes from the meeting on July 1, Reissman has been the most outspoken opponent to Kososki and his rezoning plans.  Reissman, who lives directly across Crusoe Drive from the eight acres in question, even started an online petition shortly after he received notice from Iredell County about the proposed rezoning. As of Sept. 11, that petition has 141 signatures.

‘He’s going to do something different with it.’

Reissman, along with other residents that have spoken out against the rezoning, has also talked both in the official meetings and otherwise about the skepticism he has about Kososki’s true plans for the property if it is rezoned.

“He just kept changing (the plan),”  Kuczmarski said. “He eventually admitted that he was going to use at least 50 percent of the land for his construction business.

“I got the impression from the very beginning that he’s not being up front and honest about it,” she added. “He’s trying to get this rezoned and he’s going to do something different with it.”

When reached for comment on this article, and the ongoing dispute, Kososki did not respond.

“I tried to put him in my shoes; I said what if somebody came to your neighborhood and wanted to build a storage facility between your house and the lake,” Reismann said. “I said that’s basically what you’re doing to us.”

“At what point do we stop commercial development and protect residential zoning,” Susan Elkin said. “Allowing families to live in communities without the worry of businesses encroaching on them.”

This long standing dispute is due to end soon, however. The commissioners are set to vote on Kososki’s proposal at their next meeting Sept. 15.

This is a map of the property in question.

This area of Robinson Road off N.C. 150 is being considered for rezoning.