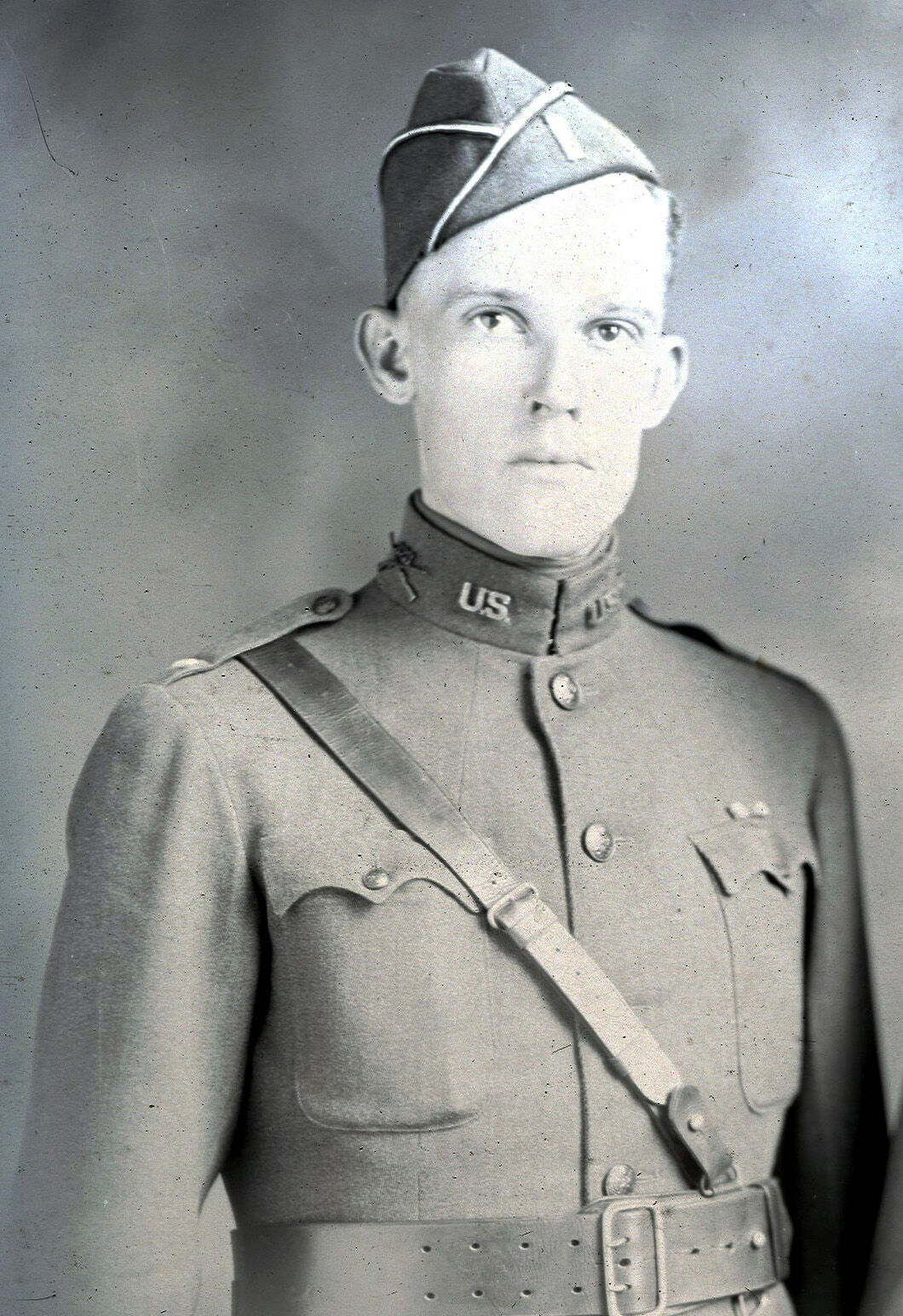 Godfrey Kimball is shown in his World War I uniform. 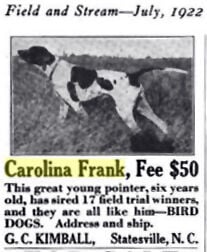 Carolina Frank was a local celebrity. 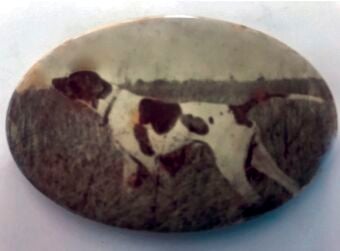 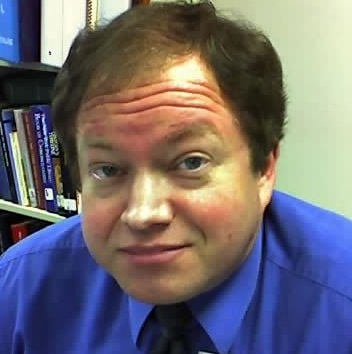 Carolina Frank was a champion bird dog or pointer whose accomplishments were often followed in the papers. On Nov. 14, 1919, The Landmark reported that, “Carolina Frank, a dog, the property of Mr. Godfrey Kimball, Statesville, won first prize in the subscription stake in the field trails at Atlantic City, N.J.”

The Dec. 1, 1921, issue of The Landmark noted in “New Laurels for Carolina Frank,” that “Mr. D.J. Kimball (Godfrey Kimball’s father, D. John Kimball) received a telegram yesterday from Waynesboro, Ga., stating that Carolina Frank had won all-age stake at head of 30 starters in the bird dog field trails being held there. Mr. Godfrey Kimball, owner of the dog, sent the message.”

Carolina Frank was described in A.F. Hochwalt's article, “Among the Bird Dogs” in the July 1922 issue of Field and Stream, “Carolina Frank is a blood-like, raking pointer that will appeal to the man looking for masterful virility, strength of limb, power and stamina. His very appearance inspires confidence and when one sees him move in the field and observes how he makes use of that marvelous nose, he will go home with the picture of a really great pointer filmed on his mind. I saw this dog on various occasions in public and in private and the oftener I saw him, the better I liked him”

The Landmark wrote of Field and Stream’s article in the Oct. 26, 1922 issue under, “High Compliment to Carolina Frank.” The paper noted that, “One picture shows the publisher of the magazine caressing two pups from Carolina Frank, whom he describes as, “one of the greatest gun and stud dogs of the year, who has sired 17 field trail winners.” The same issue carried a photograph of Carolina Frank with an ad placed by Godfrey Kimball offering the dog with a stud fee of $50.

The July 9, 1923, issue of The Landmark reported, “Local sportsmen will be interested to learn that E.F. Warner, editor of Field and Stream, will come to Statesville in the fall with a camera man to make pictures of Carolina Frank in the field. Mr. G.C. Kimball, owner of the famous pointer, who is in receipt of the letter from Mr. Warner, states that owners of promising dogs would probably have an opportunity to work them out in company with Carolina Frank at that time.”

Sadly, Carolina Frank died the following year. The Landmark, June 9, 1924, issue carried the headline, “Carolina Frank, Greatest Pointer in Dogdom, Dies.” The newspaper noted that, “Carolina Frank, considered by many judges the greatest pointer in dogdom, known to sportsmen and dog-fanciers throughout the United States, and even in Canada and abroad, died Friday night of heart trouble. His owners Mr. G.C. Kimball and Dr. T.W. Shore, of Yadkinville, sometime ago refused an offer of $3,600 ($55,372 in today’s money) for him. He was between eight and nine years old.”

Godfrey buried Carolina Frank behind his house in Statesville and erected a marker on his grave that remains today. Godfrey C. Kimball was a Statesville native born Oct. 16, 1892, to D. John Kimball, a longtime Statesville merchant, and Mary Lou Click Rubell. Godfrey’s grandfather Henry I. Kimball, served in Co. B, 2nd Regiment N.C. Cavalry during the Civil War and was wounded on Aug. 25, 1864. During the war, Private Kimball was a personal courier for Gen. Robert E. Lee and was with him at the surrender at Appomattox.

When the U.S. entered World War I, Godfrey, who had graduated from Trinity College, was among the first in Iredell to volunteer. Kimball served as a 1st lieutenant in the Machine Gun Company, 323rd Infantry in France. After the war, he worked at his father’s grocery at 427 Davie Ave., before entering the cotton gin business at the Kimball Ginning Co.

On June 12, 1924, Kimball married Katharine S. Brawley of Statesville and in May 1927, he organized the Machine Gun Troop of the 109th Cavalry in Statesville to replace the Iredell Blues, a local militia group which was absorbed by the U.S. Army in WWI and then dissolved. In the March 20, 1930, issue of The Landmark, “Captain Godfrey C. Kimball announced his candidacy for the office of Sheriff of Iredell County subject to the action of the Democratic primaries to be held June 7th 1930.”

Iredell County politics was dominated by the Democratic Party for many years and the Democratic primary pretty much elected the sheriff in those days. What is interesting though is that Godfrey Kimball actually lost the parties election to Robert Franklin Rives. Rives had been elected Iredell County treasurer in 1916, serving for eight years before resigning to become secretary and treasurer of the Home Building and Loan Association.

The chairman of the Iredell County Board of Elections declared Rives the winner with 2,602 votes to Kimball’s 2,589. Kimball challenged the results and the party set a second primary to be held on July 5th, but Rives withdrew from the race, citing a desire to maintain unity in the party and to save the county the expense of a second primary.

Neither man would live long. Robert F. Rives died May 11, 1932, from cancer while Sheriff Kimball was killed in the line of duty on Aug. 17, 1934. A story of the election of 1930 was passed down in the Rives family. It seems a Mr. Jay Holton received a phone call from someone claiming to be with the Iredell Board of Elections after the polls had closed on the night of the election. The caller informed Mr. Holton that he was to be arrested for voting twice at the fire department in downtown Statesville. The caller explained that they had found yet another Republican vote.

Joel Reese is the local history librarian at the Iredell County Public Library in Statesville.

Godfrey Kimball is shown in his World War I uniform.

Carolina Frank was a local celebrity.