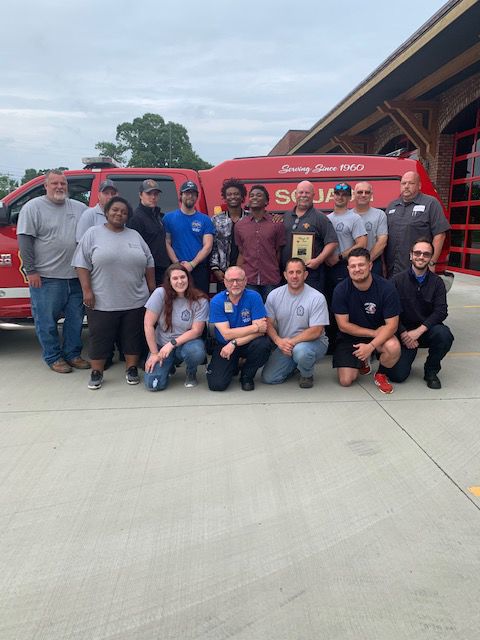 The family of Larry Turner presented a plaque to members of the Cool Springs Volunteer Fire Department, Iredell County Rescue Squad and Iredell EMS for their work at a wreck involving Turner earlier this month. 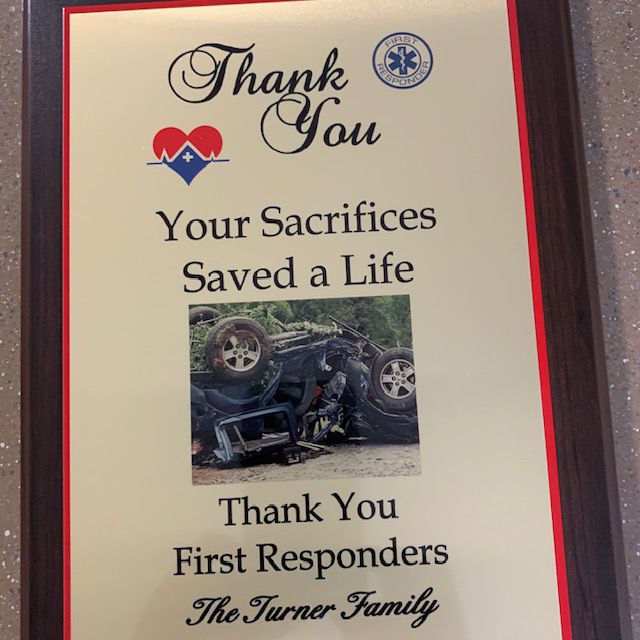 Larry Turner's family presented this plaque to the emergency personnel who responded to a wreck involving Turner and three others earlier this month.

It took nearly an hour for emergency personnel to cut Larry Jamell Turner out of a mangled pickup truck May 11.

Cool Springs Volunteer Fire Chief Andy Webster said in the two weeks since the crash, he and others on the scene wondered how Turner was doing.

Some updates filtered in through social media but on Tuesday, Turner’s family gave them a status report in person. The first responders who answered the call late that Monday night got the good news that Turner is expected to make a full, if long, recovery.

And they got something they rarely receive — a heartfelt thank you from Turner’s family and others that were in the truck that night. Everyone but Turner either walked away or spent a short time in the hospital.

Turner’s sister Tracey Graham, who lives in Greenville, South Carolina, said she got a phone call early on May 12. “I received a call from my mom that my brother had passed away,” Graham said. “We drove to North Carolina thinking he had passed away. That was a very emotional car ride.”

As they got to the hospital in Winston-Salem, Graham and her mother learned Turner had not died but was in critical condition. Both of his legs were broken, as was his pelvis and he had a collapsed lung and bleeding on the brain. “It was a very dire prognosis,” she said.

The Turner family did learn some good news. Graham’s nephew was one of the three passengers in the car, and he had been treated and released from Iredell Memorial.

During the next two weeks, Graham and other family members kept tabs on her brother, who they couldn’t visit in person because of coronavirus restrictions. Turner continued to defy the odds. He had surgery every other day — 35 hours worth so far. Graham said his other injuries, the collapsed lung and the bleeding on the brain, healed on their own.

They began to have hope that Turner would recover. He was sitting up and they were able to talk with him. “His voice wasn’t very strong because he’d been on the ventilator. He sat up and he recognized us,” she said. “I can’t explain all the emotions.”

It was as her brother recovered that Graham, through social media, learned the firefighters, Iredell EMS crew and Iredell Rescue Squad members who responded that night were trying to find out about Turner. Graham began posting updates on her social media pages and connected with Brandon Lester, one of the rescue squad members who was at the scene.

“They were amazed that he was alive,” she said.

That connection brought Graham and a group of complete strangers together, and ultimately, she said, her family wanted to do something to thank the emergency personnel.

The meeting was arranged for Tuesday, a little more than two weeks since the crash.

The Turner family presented a plaque as a symbol of appreciation for the work that night.

“We are so grateful for them that night, the care they gave, the interest they’ve shown,” Graham said. She said hearing the stories from those on the call was an eye-opener for her family. “It made me realize the emotions they put into their jobs,” she said. “It was flawless, each one of them, from getting him out of the car to getting him airlifted.”

Webster said no one person was responsible for the positive outcome. It was a group effort, involving the telecommunicator who took the 911 call, to firefighters, paramedics and rescue squad personnel. “It took all of those people to make it happen,” he said.

A veteran of the fire service and a retired captain from the Hickory Fire Department, Webster said a visit from a family of someone they’ve helped is rare.

“We were tickled pink,” he said.

Webster said the feeling is one he has trouble describing. “It’s like, wow, we really made a difference,” he said.

Graham said giving the responders a plaque is the least they can do to thank the men and women who saved her brother’s life.

Webster said the plaque is something everyone involved will treasure, but the genuine appreciation from Turner’s family and hearing he is expected to make a full recovery is what is most appreciated.

“Seeing the smiles on the faces of his family is something we will never forget,” he said.

Graham said her brother wants to thank those men and women in person when he’s able to do so.

She said she believes he’d feel the same way she and other family members do. “We’ll never be able to say ‘thank you’ enough. Because of them, our brother is still here,” she said.

A pet being hit by a car is a nightmare scenario, but for Jerry Jones, it became not only a reality but a harsh lesson in how the legal system…

The family of Larry Turner presented a plaque to members of the Cool Springs Volunteer Fire Department, Iredell County Rescue Squad and Iredell EMS for their work at a wreck involving Turner earlier this month.

Larry Turner's family presented this plaque to the emergency personnel who responded to a wreck involving Turner and three others earlier this month.