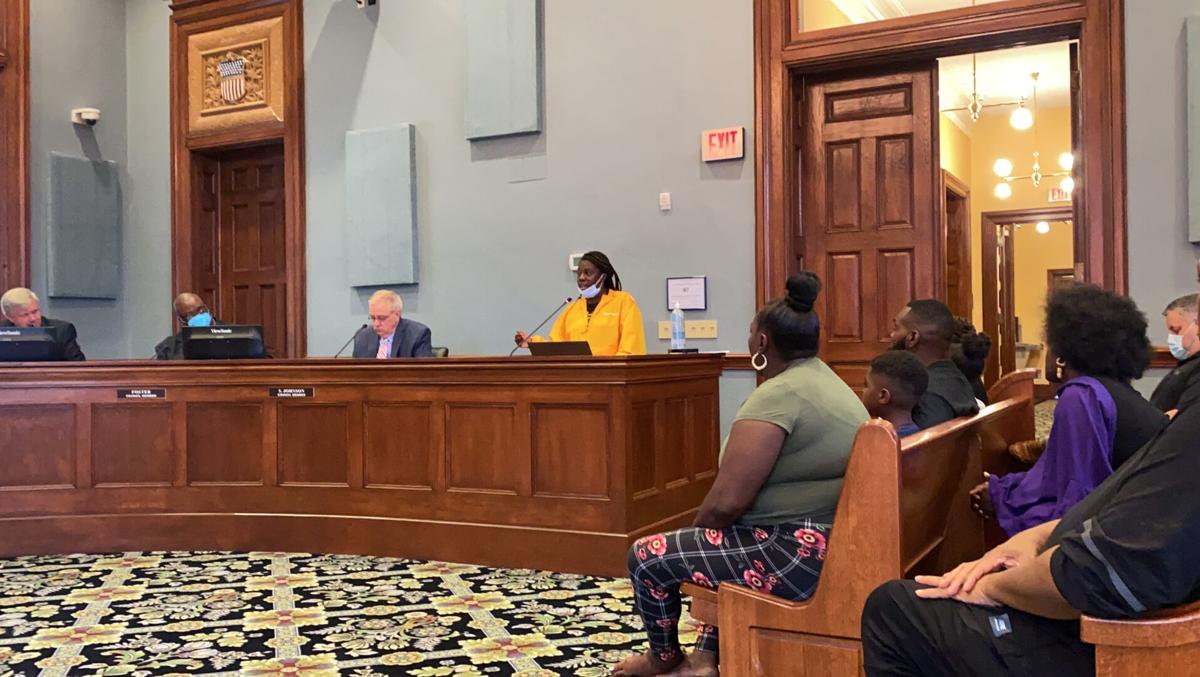 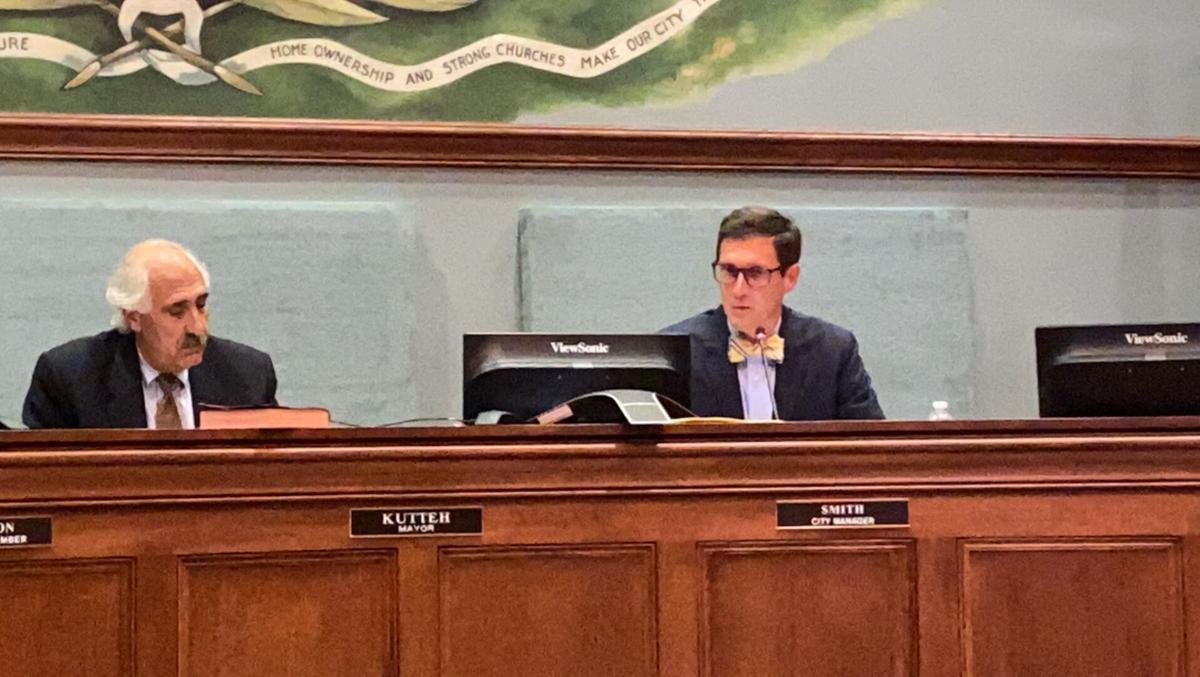 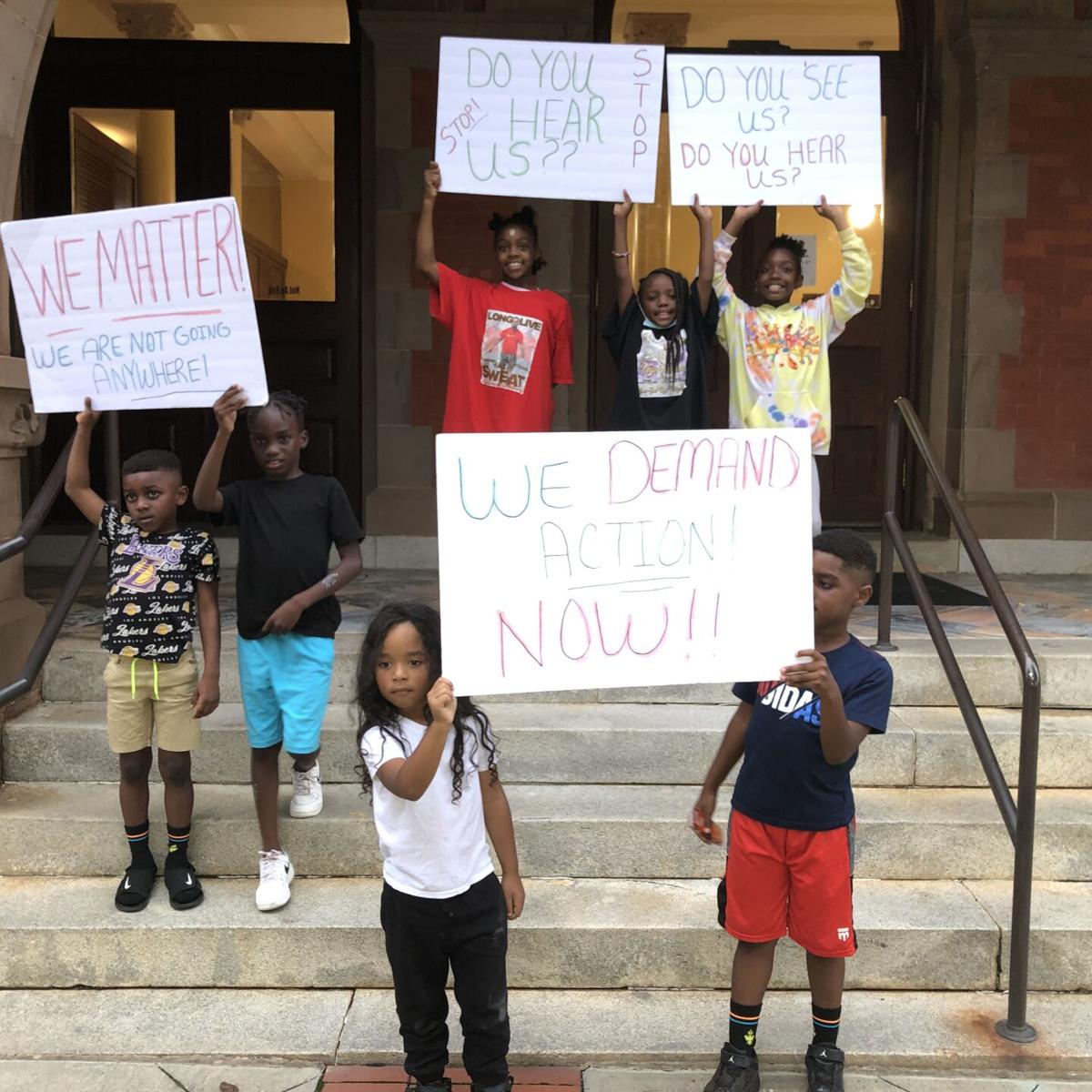 Children held up signs outside the Statesville City Hall before Monday’s meeting.

For the first time since the tragic death of 8-year-old Ah’miyahh Howell on June 28, the Statesville City Council met in city hall Monday night and heard from the concerned citizens of the southern part of the city and beyond.

From pleas for increased public safety to accountability and respect, to finding solutions, members of the Statesville community spoke for more than an hour in an attempt to spur Mayor Costi Kutteh and the City Council into action.

Community members that wished to comment during the 7 p.m. meeting began piling into the council chambers long before that, with so many signing up that Kutteh ultimately made the decision to allow them to begin speaking immediately after the council finished their pre-agenda meeting.

The extra 20 minutes allotted to the speakers allowed all those who signed up to speak without the need of the council limiting their time.

During the expanded public comment period, citizens brought their ideas of how to improve South Statesville to the council, including suggestions such as security cameras, improved housing standards and a rededication to providing children with more opportunities for activities.

“Twenty, 30 years ago, we had pools that we could go to every weekend, all summer that cost us 50 cents,“ Kimberly Wasson said. “And somebody thought that they weren’t important to our community, so they were removed.

“We have basketball courts that don’t even have lines on them that our tax dollars pay for. These are basic things that we see in our communities all the time,” Wasson continued. “It gives us the impression that we’re second-class citizens.”

Following all of the agenda items scheduled for the meeting, a handful of members of the City Council offered their response to the comments made by the Statesville community, led by a statement from City Manager Ron Smith.

During his statement, he offered some insight into how the city will strive to improve in the coming weeks and months, including transportation, housing, and recreation initiatives that the city is working on, all centered on “raising the tide” in Statesville.

“A lot of people have come to me and I have been listening,” Smith said. “We’re trying to determine how we can fix these things by putting policies in place. We’re going to continue to work on things we can control, but we need to form partnerships with the community.”

Doris Allison, the representative of Ward 3, where the murder of Ah’miyahh Howell took place, spoke with a great deal of emotion regarding the tragedy and how the city plans to respond as well as offering some words to her fellow council members.

“Saying a speech is not going to get it done. It’s going to take hard work and responsibility — and we have to take that responsibility,” Allison said. “This should not be a one-time issue. We need people to take responsibility and say that we’re in this for the long haul.

“We’re working together, through the good, bad and the ugly. It’s action time. If you’re not part of the solution, you’re definitely part of the problem,” she continued. “Funds need to be put into South Statesville. So let’s see how we’re going to vote when the time comes.”

Items passed at Monday’s meeting include:

An increase of $300,000 to the existing line crew labor contract with Sumter Utilities.

An ordinance to demolish an abandoned, dilapidated dwelling at 321 Newton Ave. as unfit for human occupancy.

An ordinance to close/board the abandoned, dilapidated dwelling at 325 Monroe St. as unfit for human occupancy.

An ordinance to annex the portion of property on James Farm Road.

Authorizing a “notice of condemnation” and “resolution authorizing condemnation to acquire certain property” regarding a needed interest in properties at 567, 577, 587 and 625 Wallace Springs Road.

Ford to invest $11.4 billion in Tennessee and Kentucky

Ford to invest $11.4 billion in Tennessee and Kentucky

A brief round of applause and a chorus of thank yous filled the normally-quiet air of the board chambers in Mooresville Town Hall on June 10. After more than an hour of public comment was heard by members of the Mooresville Planning Board from residents of the Silverhook and Gibbs Road communities, board chair Steve McGlothlin made the official announcement that a request meant to facilitate an “automotive country club facility” at the end of North Gibbs Road was not approved, denied by a 4-2 margin.

The following deeds were filed in the Iredell County Register of Deeds office from Sept. 10-16. For more information regarding specific plots …

A Stony Point man was shot in the leg and a second man is facing charges.

Children held up signs outside the Statesville City Hall before Monday’s meeting.