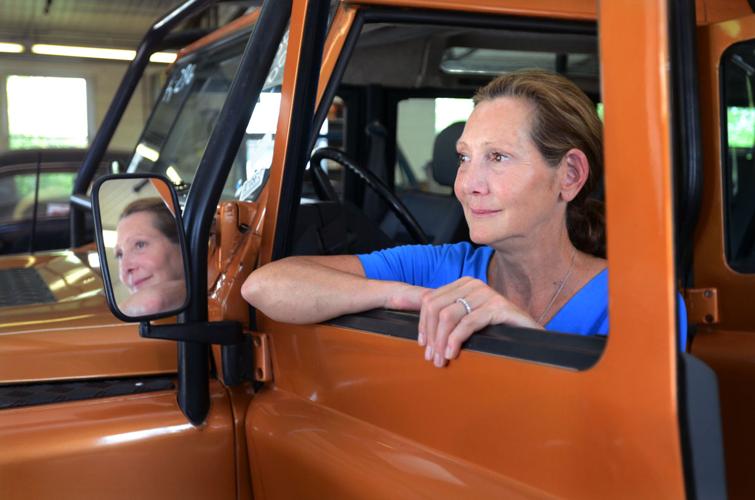 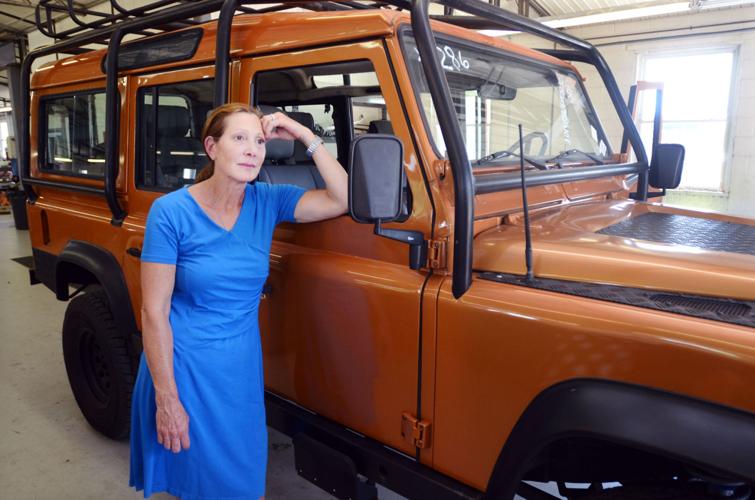 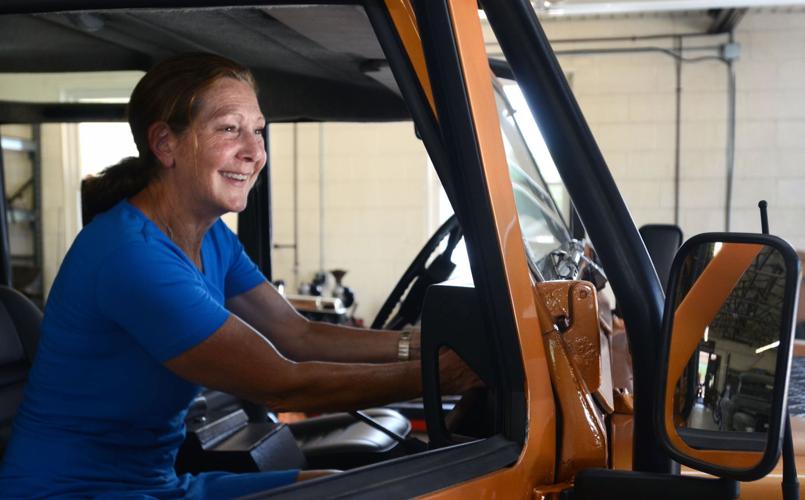 Jennifer Brinkley sits inside her 1985 Land Rover Defender at Vintage Restoration auto shop in Troutman. Last week Brinkley was able to reclaim ownership of the vehicle after it had been confiscated at her home by seven government officials 11 months ago. 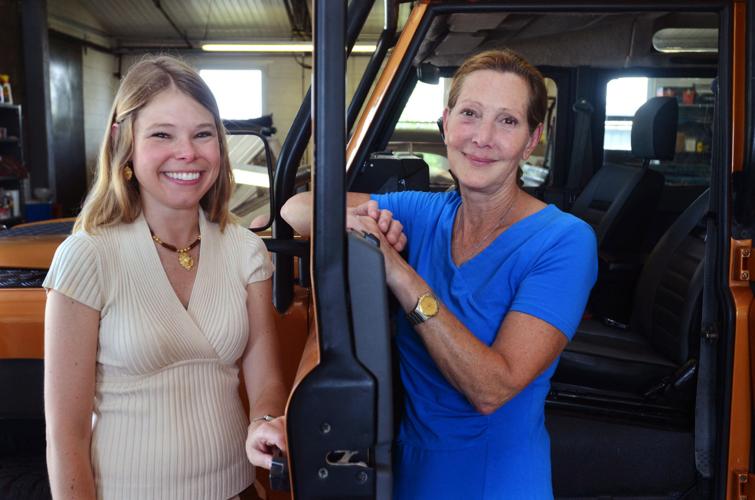 Jennifer Brinkley, right, stands beside her 1985 Land Rover Defender at Vintage Restoration auto shop in Troutman next to her attorney Christina Clodfelter. Last week Brinkley was able to reclaim ownership of the vehicle after it had been confiscated at her home by seven government officials 11 months ago. Photo by Chelsey Allder

Buying a car for most is usually a decision fraught with some trepidation. It is, after all, an investment that typically involves thousands of dollars and often involves a lengthy schedule of payments as well as interest rates and the like. And in modern American culture in particular, one’s vehicle goes a long way in reflecting one’s character.

So getting a car is almost never an endeavor one takes on willy-nilly.

But very few have gone through the anguish, anxiety and frustration experienced by Jennifer Brinkley after she purchased a kind of odd-looking, all-terrain machine called a Land Rover Defender.

Brinkley’s ordeal was a nearly year-long nightmare that finally ended earlier this month with the signing of a consent order that served to release her 1985 model Defender and more than three dozen others that were said to have been in violation of some seemingly minor -- and certainly arbitrarily implemented -- importation regulations.

The vehicle was seized last July when a half-dozen law enforcement agents -- some with the Department of Homeland Security’s investigations unit -- showed up at her Troutman-area home and took it away.

“They were armed,” Brinkley said. “And they blocked my driveway.”

Furthermore, she said, they gave only a clinical explanation of what was going on and never told her where they were taking her prized Defender.

“I am not a criminal but they made me feel like one,” she said. “This kind of thing should not happen in America.”

'This kind of thing'

It was only over the course of time that Brinkley and her husband Dennis learned exactly what kind of thing they were dealing with.

And, with the help of attorneys Christina Clodfelter from Statesville and Will Hedrick of Wake County, the Brinkleys came to believe they had gotten swept up in machinations of federal officers who took on the seizure of the Land Rovers as a kind of pet project.

In an affidavit filed in support of an arrest warrant he proposed for the importer of the cars, officer Christopher Feldman wrote that his actions were dictated by a law whose obscurity is highlighted by its three different sets of parentheses.

Found under title 19 of the U.S. Code, Section 1595a; subsection (c); paragraph (2);  subparagraph (A) reads: “The merchandise may be seized and forfeited if its importation or entry is subject to any restriction or prohibition which is imposed by law relating to health, safety, or conservation and the merchandise is not in compliance with the applicable rule, regulation, or statute.”

Among other complaints about the matter leveled by Clodfelter was one concerning the primary verb contained in the edict.

“The law says it ‘may’ be seized,” Clodfelter said. “It doesn’t say it must be or it shall be. It essentially says that it could be.”

But beyond a possible matter of semantics is the question of what exactly could have been the hang-up with the cars.

It should be noted that virtually no two countries have identical regulations regarding safety qualifications of vehicles and that this law and others similar to it, if followed to the letter and adhered to without any room for exception, would mean that almost no car that was originally built for use in another country could be allowed into the country.

Indeed that sentiment is borne out in Feldman’s own affidavit, which reads in part, “It is unlikely that a vehicle obtained abroad meets all relevant standards and can be legally imported into the United States ... the modification required to bring it into compliance may be so extensive and costly that it may be impractical or even impossible to achieve such compliance.”

And so comes the great irony of the matter: cars that are at least 25 years old -- which is to say, cars that are almost intrinsically less safe and even more out of compliance with U.S. standards -- are deemed to be of a “classic” sort and are allowed to enter as sort of collector’s items.

As mentioned, the Brinkleys’ Land Rover is a 1985 vintage, which would have made it 29 years old last year when it was taken from their property.

And this is where Jennifer Brinkley and others feel Feldman went too far in making his case. He claimed the cars’ Vehicle Identification Numbers (VINs) were altered by the importer, so that they seemed older than they actually were.

“How crazy is that?” asked Brinkley by way of pointing out the oddity of laws that could set into motion plans to circumvent safety guidelines by identifying something as being even more unsafe than it was thought to be.

The Feldman affidavit cites the case of two Defenders from the same importer that are reported to be from the mid-1980s but which Feldman claims to been manufactured as recently as 2000 as certain parts on them were determined to be newer.

The affidavit also includes a list of all 40 of the Defenders seized last July and the Brinkleys’ vehicle is identified as being manufactured in 1987, which would still have made it 27 years old last year when it was taken.

Feldman’s grounds for including it in the seizure complaint, however, is the fact that the car was first imported into the United States in November 2010, at which time it was only 23 years old.

But the Brinkleys only purchased the car last June. At least two other people in the United States owned it before they did.

A legal tactic that is most often employed in the case of persons who buy property that is, unbeknownst to them, stolen or having being involved in a crime is called the “innocent purchaser” defense.

“If you buy something in good faith at a fair price and had no idea there was a problem with it, you are an innocent buyer,” Clodfelter said. “But we couldn’t use that in this case even though Jennifer was an innocent buyer.”

“They knew all that but it didn’t matter,” Jennifer Brinkley said. “In a case like this you are not innocent until proven guilty -- the burden of proof is on you. They can just take your stuff whether you broke any laws or not.”

And once they take it, Clodfelter said, you can pretty much forget about it in most cases.

“Most people never have to deal with this and they have no idea that it’s almost impossible to win a civil forfeiture case,” she said.

And that’s why they agreed to settle the matter under the terms of the consent order.

“First of all, it could have been another year and a half or more until the case even came up,” Clodfelter said. “That means the car would have been sitting there for a total of close to three years.”

And folks only learned in the past few weeks where their cars were even sitting. In the Brinkleys' case, their Defender was being held in Williamston, S.C. And as soon as she was cleared to get it, Brinkley went down and got it.

“It was supposed to be covered but it was out in the open,” she said. “And some of the windows were open and vents were open and it’s got rust coming up again. And they didn’t take care of it. But I got it back and for a while, I didn’t know if I ever would.”

The Defender’s first stop was a week or so of rehab work in the Troutman shop of mechanic Tony Merk.

And while Merk said he can whip the car back in shape, he said the government that took it could be too far gone to save.

“This is just one atom of one molecule of one fraction of the ineffectiveness and wastefulness of our government,” he said. “Just because you can do something doesn’t mean you should do it.”

Snack Bar has been a Hickory institution since 1947. Still reeling from COVID shutdown, the restaurant will close next month.

Hickory will lose its snack burgers and kraut dumplings soon.

A teacher, who was arrested earlier this month on statutory rape and other charges, was served with two more warrants.

The first Second Saturday Festival is set for Saturday, and organizer Susan Rash with All-American Sound, Stage and Lights was pleased to see …

Sarah Pittman announced as replacement candidate for Iredell-Statesville Schools board

George Clinton and Parliament-Funkadelic bring to 21 the number of main-stage musical and dance performers announced for the festival from Sept. 9 to 11 in downtown Greensboro. It features groups representing a diverse array of cultural traditions on multiple stages.

Driver Amber Lynn, agitating and adored, thrills crowds at NC track. 'She always has a target on her back …’

She's one of the most popular drivers in her fifth season at Winston-Salem's famed quarter-mile track.

In three weeks the Iredell County Agricultural Fair will open for a nine-day run.

The best ever: Corvettes of Statesville Cruise-In raises $17k, brings in canned food for Matthew 25 Ministries

First it was brutally hot and then, late in the day, came a thunderstorm that ended the day early, but the Corvettes of Statesville Cruise-In …

Jennifer Brinkley sits inside her 1985 Land Rover Defender at Vintage Restoration auto shop in Troutman. Last week Brinkley was able to reclaim ownership of the vehicle after it had been confiscated at her home by seven government officials 11 months ago.

Jennifer Brinkley, right, stands beside her 1985 Land Rover Defender at Vintage Restoration auto shop in Troutman next to her attorney Christina Clodfelter. Last week Brinkley was able to reclaim ownership of the vehicle after it had been confiscated at her home by seven government officials 11 months ago. Photo by Chelsey Allder