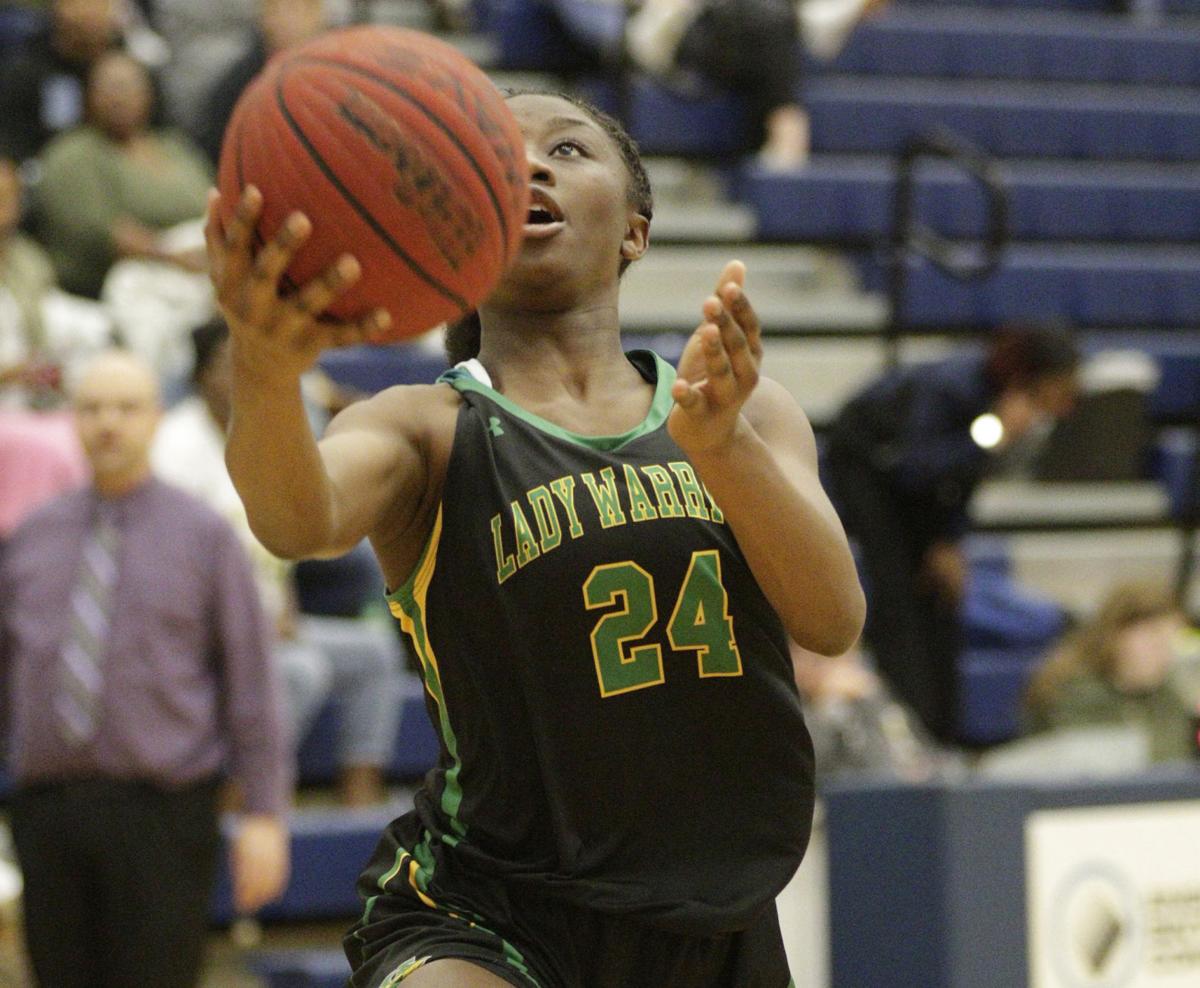 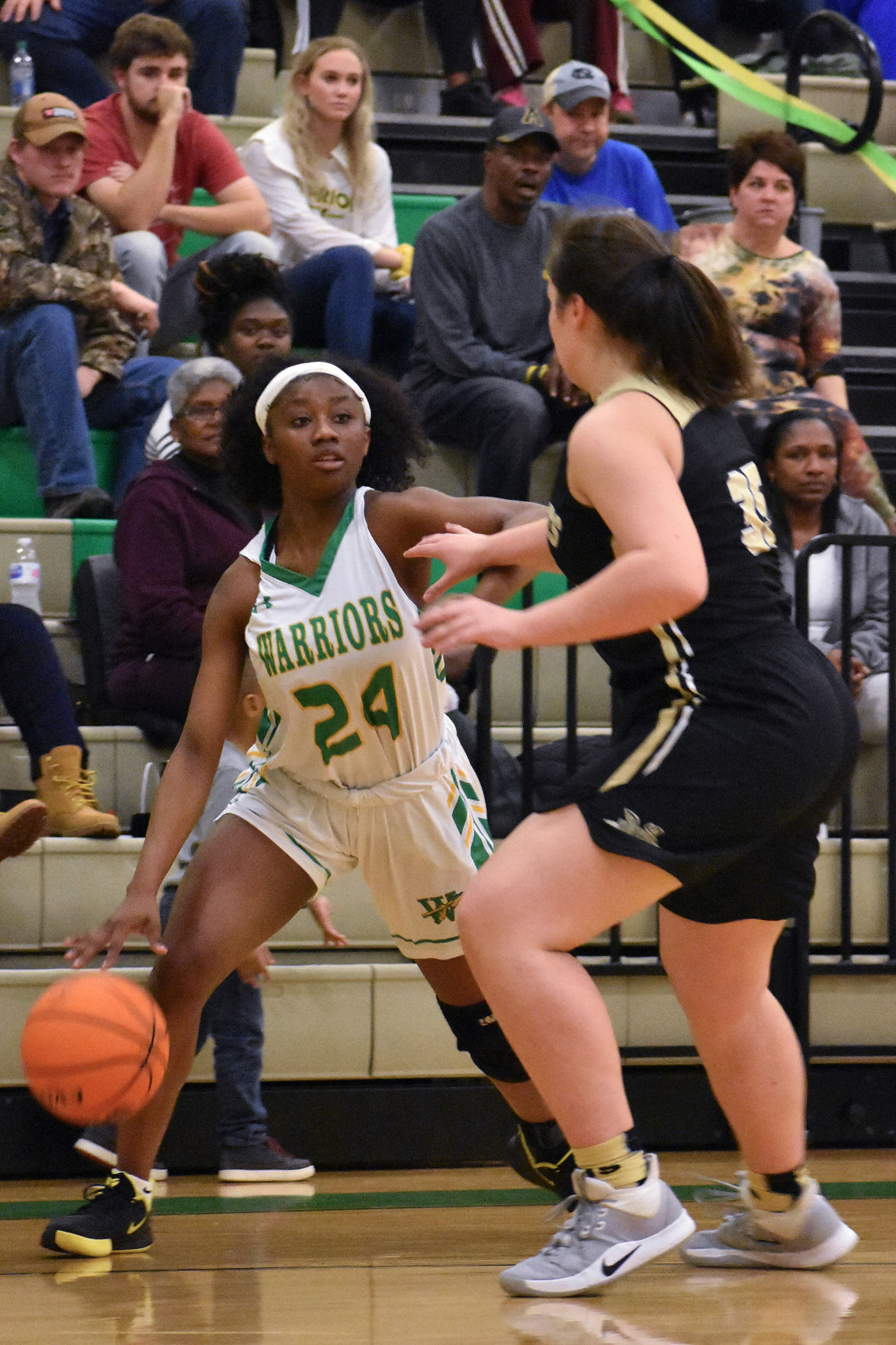 West Iredell's Lariyah Clark (24) looks to dribble past a Draughn defender this past season. Clark averaged 18 points a game for the Warriors.

Recording a distance of 35 feet, 11.25 inches, West Iredell’s Lariyah Clark placed fourth in the triple jump during the 2A state track and field championships last spring.

She did that as a freshman.

The leap she made on the basketball court this season equally impressed Warrior girls coach David Parsons.

Clark, a 5-foot-10 combo guard, averaged 18 points while shooting 47 percent from the floor. She also averaged 8.5 rebounds, 2.5 assists, 2 steals and a blocked shot per game.

The sophomore didn’t waste any time making an emphatic statement on her way to being named the R&L County Girls Basketball Player of the Year.

In the season opener at North Iredell, Clark poured in 23 points on 9 of 15 shooting (60 percent). She also grabbed nine rebounds to go with her three steals and three blocks as the Warriors prevailed 49-46.

“We went as she went a lot of nights,” Parsons said. “When she was banged up like versus West Caldwell and Draughn we struggled.”

During a December 12, 2019, home game Clark scored a season-high 30 points to complement her 14 rebounds as West Iredell turned back Statesville, 51-47.

She expected to be productive, which is good because the Warriors leaned on her.

“I was always told to go as hard as possible, to give it all I’ve got and to be a team player,” Clark said.

In an age where the 3-pointer has become so prevalent, Clark continues to look for the high percentage shot.

Attacking the basket, scoring or drawing contact is option one for her. Being explosive works to her advantage.

“One of the great things about her game is her acceleration, that first step and creating space,” Parsons said. “She does that really well.

“She’s a matchup problem for anyone trying to play us in man or zone.”

Her speed and leaping ability are a bonus on defense as well, Parsons pointed out. She can recover quickly if beaten by the ball handler and is still able to block or alter their shot.

Turnovers were an issue at times. That is expected to dwindle as the maturation process continues.

At least she refused to let those get the best of her. Miscues cause some players to lose focus altogether.

“I’m a very competitive player,” Clark said. “If I make a mistake on offense I try to make up for it on defense.”

A 30-year-old man died Thursday after wrecking his car as a Statesville Police Department officer was attempting to stop the vehicle, the SPD …

Despite President Donald Trump's sharp criticism, federal guidelines for reopening schools are not being revised, the head of the CDC said today.

The United States saw a record number of 60,021 new cases Tuesday as overall cases in the country near 3 million.

The teacher jailed for raping a student she would later marry has died at age 58. Get caught up on all the morning's news.

West Iredell's Lariyah Clark (24) looks to dribble past a Draughn defender this past season. Clark averaged 18 points a game for the Warriors.