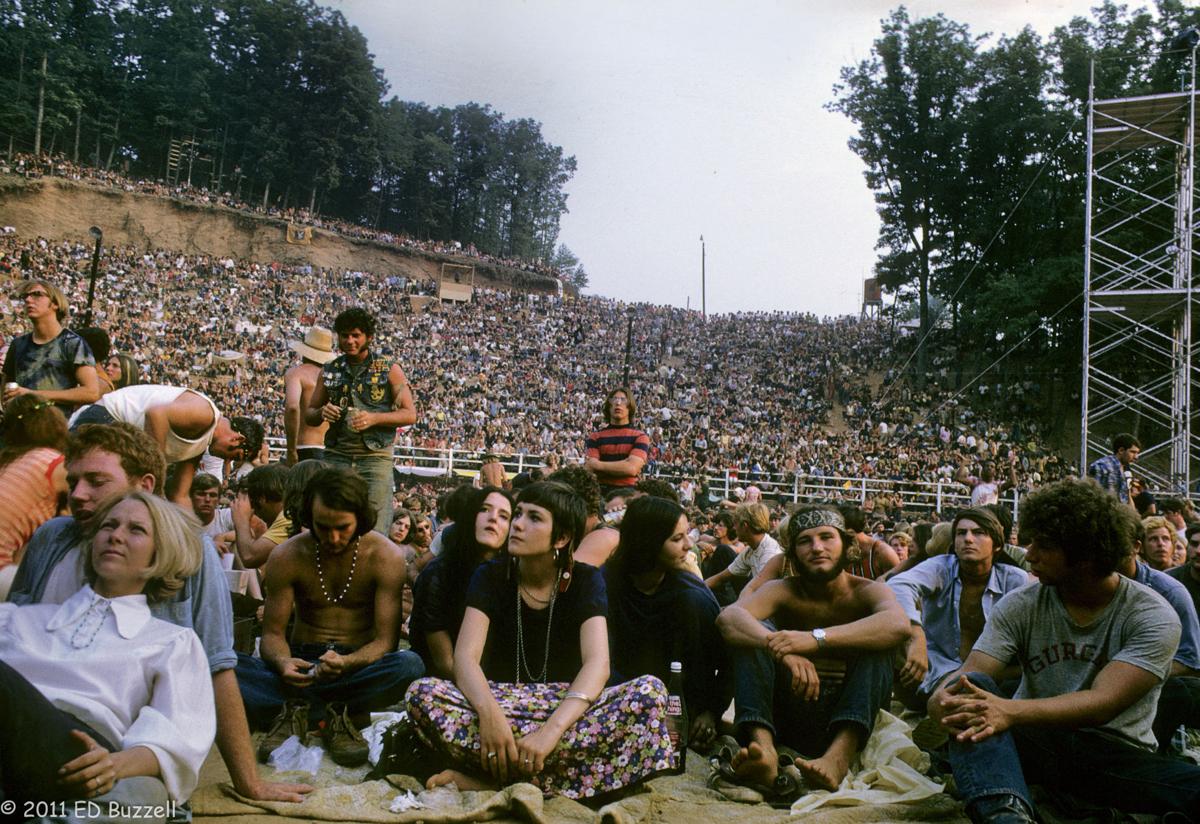 Love Valley went from a quiet cowboy town to a bustling destination literally overnight. Attendance estimates for the rock festival held there from July17-19, 1970 range from 75,000 to 200,000. See more of Ed Buzzell's photos at: https://buzzell.smugmug.com/Events/Love-Valley-Rock-Festival-1970/ 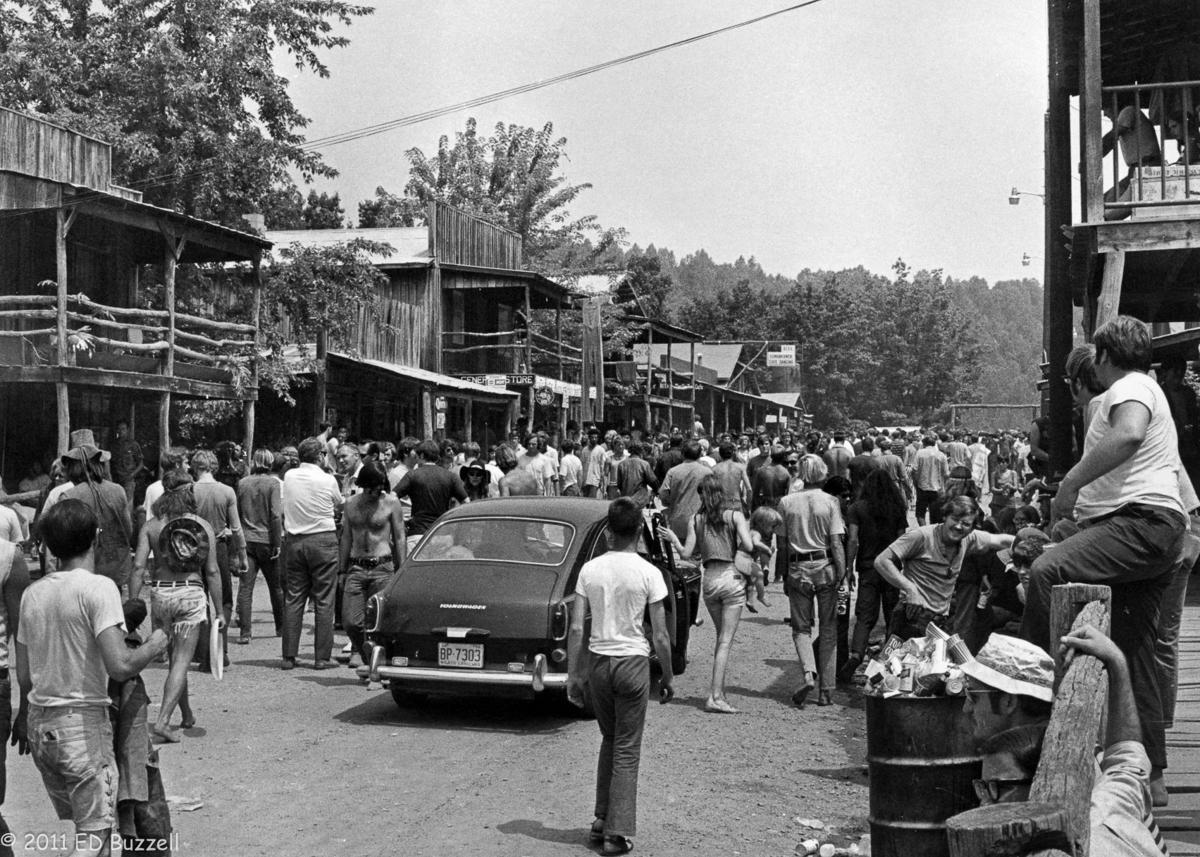 Ed Buzzell, who shot this photo as a freelancer for United Press International, said the festival had "some of everything." See more of Buzzell's photos from the festival at https://buzzell.smugmug.com/Events/Love-Valley-Rock-Festival-1970/ 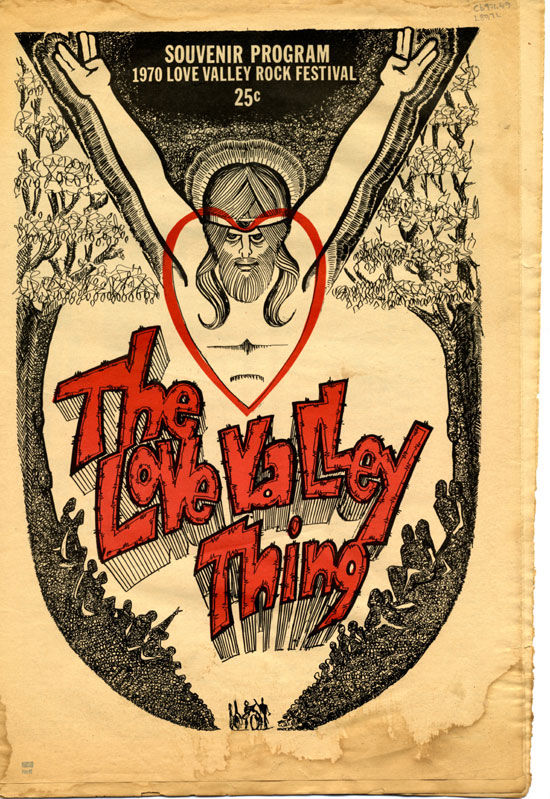 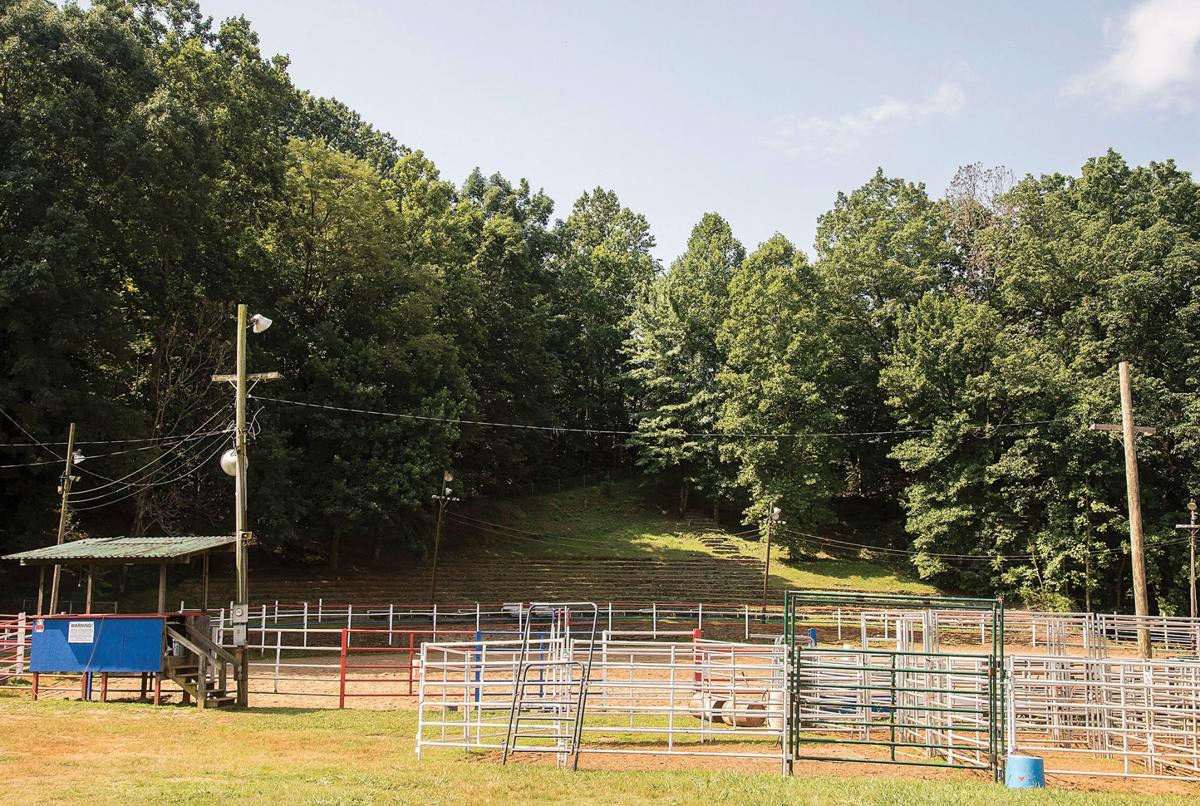 A view of the bowl, where the original concert was performed 47 years ago this weekend, in Love Valley on Thursday. 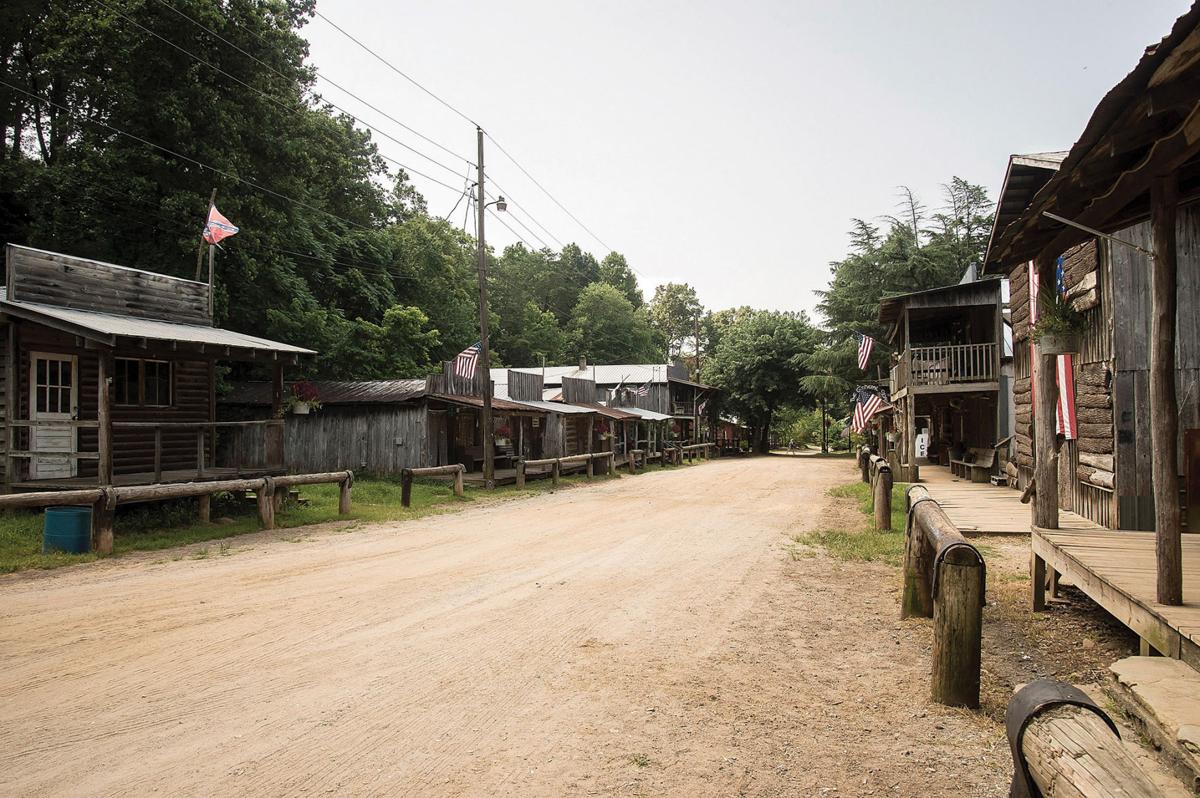 In 1970, Andy Barker felt his 22-year-old daughter, Tonda, was too young to attend the prior summer’s Woodstock Music Festival in New York.

He refused to let her go, but Andy was willing to provide a safe place to hold a concert in Love Valley, the little Iredell County cowboy town he built from the ground up and incorporated in 1954.

“He always felt like Love Valley was a peaceful place to come,” Tonda said.

“We had no idea so many people would arrive,” she said.

The festival, which happened 47 years ago this weekend, had all the trappings of the late '60s hippie culture: drugs, nudity, free spirits and music.

On the event of the anniversary, the Record & Landmark reached out to those involved about their recollections of the legendary festival, which put Love Valley on the map.

Preparing for the show

With Andy’s permission secured, Tonda’s next step was to find bands and prepare for the concert.

Her then-16-year-old brother Jet Barker supervised the construction of infrastructure to support the bands and crowd. Tonda knew a Belmont-based booking agent she worked with as the entertainment coordinator at William Peace University in Raleigh.

She and Jet approached the agent looking for musicians and heard about a then-little-known Southern rock outfit called The Allman Brothers Band.

The siblings were invited to the band’s performance at the Atlanta International Pop Festival on July 3-5.

The word got out leading up to the Love Valley show and many wanted no part of Iredell County hosting such a crowd. Pastors sent Bible verses they said spoke out against the culture of the time.

But there was also support.

One letter to the editor in the Record & Landmark signed R. E. Ladd said those critical of the festival failed to see the “unity and brotherhood” that transcended racial barriers, made problems seem far away and generated “honesty and harmony and love.”

When the Love Valley Thing started, thousands arrived. Tonda said she believes many came up from the Georgia show.

The Barkers collected money for 25,000 tickets. The Friday night total tripled that, she said.

But it was just what they had hoped for.

“It was perfect,” Tonda said. “It was like a dream. We had worked so hard and we could finally just sit down and enjoy it.”

Ed Buzzell, a photo stringer with United Press International, arrived from Charlotte on a borrowed motorcycle, planning to take photos and experience the festival.

Buzzell said he ran out of film shooting the festival’s crowd. (See a full gallery of Buzzell's photos by clicking this link.)

The air was thick with marijuana smoke, Buzzell said.

“I recall standing under the rough wooden arch at the end of main street at the entrance to the amphitheater on Saturday night and was certain I could get a contact high,” he told the Record & Landmark last week.

Buzzell also recalled an armed guard stationed at the water pump to keep it from being contaminated by drugs.

Chuck Eldridge, who served as the foreman for the festival and now runs the Tattoo Archive in Winston-Salem, said the amphitheater set up was particularly strong.

“The music rang,” he said. “You could be a mile away from the band and still hear them.”

On Saturday, the chaos began.

People poured in from every direction. There were too many entrances and people to control, said Cindy Barker, who is Jet Barker’s widow and still lives in Love Valley.

“People were camping on the hillsides,” Eldridge said. “There were random camps all through the woods.”

Buzzell’s photos provide a glimpse of the way it was.

Tents were scattered around the grounds. Makeshift stores boasted "hippie crap” like headgear and bags and peace flags. An organic free kitchen was promoted on signs around the town.

Tonda said her father maintained the peace, even with rival biker gangs present.

At one point, rival members of the Hells Angels and Outlaws motorcycle clubs faced off in the main thoroughfare in Love Valley backed by their respective groups, Tonda said.

Andy Barker stepped between them and confiscated the weapons — a chain and an axe.

“He told them he didn’t want there to be trouble and they were respectful,” Tonda said. “He was like that. People listened to him.”

The Hells Angels dispersed among the crowd or left. The Outlaws camped near town and didn’t cause any more trouble, she said.

Aftermath of the Love Valley Thing

After the festival, many of the hippies stayed, at least for a while.

“Some are still here,” Tonda said.

The Barkers and remaining members of The Allman Brothers Band are still friends today. The recent deaths of two of the original members hit the family hard, Tonda said. In January, drummer Butch Trucks committed suicide. Gregg Allman died in May.

“I was closer to Dickey than anyone,” Tonda said, “but I remember the unique personalities of all of them.”

“Butch Trucks spoke the most about Love Valley,” said Bert Holman, a band manager. “It was one of their biggest headline gigs at the time. It was like their own little Woodstock.”

The show was a once-in-a-lifetime experience for many, and 47 years removed from the event, the memories are good ones.

Said Buzzell: “I think what made the Love Valley festival special is that it had some of everything that was going on with the hippie culture at the end of the '60s – the music, the war protesting (peace movement), drugs … and a large group of dedicated free spirits (and) college students enjoying a summer rock concert in the uniquely special setting of Andy Barker’s town.”

Women protest the world's 'silence' over crisis in Afghanistan

Women protest the world's 'silence' over crisis in Afghanistan

Sheriff's officials said Halyna Hutchins, director of photography for the movie "Rust," and director Joel Souza were shot. The Santa Fe New Mexican reported Baldwin was seen Thursday outside the sheriff's office in tears, but attempts to get comment from him were unsuccessful.

Love Valley went from a quiet cowboy town to a bustling destination literally overnight. Attendance estimates for the rock festival held there from July17-19, 1970 range from 75,000 to 200,000. See more of Ed Buzzell's photos at: https://buzzell.smugmug.com/Events/Love-Valley-Rock-Festival-1970/

Ed Buzzell, who shot this photo as a freelancer for United Press International, said the festival had "some of everything." See more of Buzzell's photos from the festival at https://buzzell.smugmug.com/Events/Love-Valley-Rock-Festival-1970/

A view of the bowl, where the original concert was performed 47 years ago this weekend, in Love Valley on Thursday.